A Thousand Faces Watching Me - By Stan Kempton 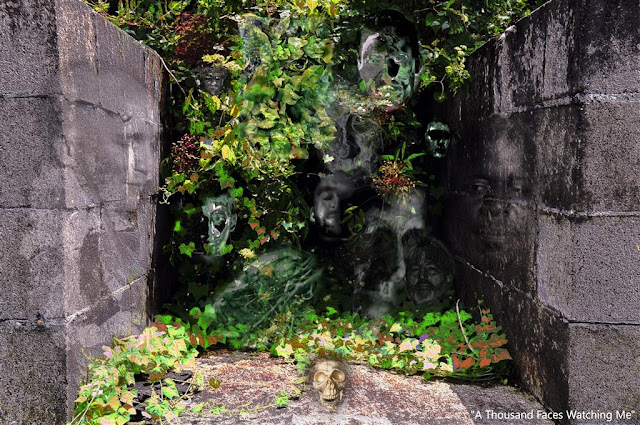 The solitary lamp struggles to completely show me. Backlit against the apartment window, I’m thinly etched against the glass, hair pinned in a tightly wound bun, unflattering nursing scrubs and a wristwatch to count heartbeats. The hospital has become a second home. Dayshift during winter means you never see the sun with the roving hordes of doctors and concerned families with the patient charting keeping me late. All that can be salvaged of any given night is microwavable dinners and two glasses of wine, so I’m sorry for my lack of participation, especially last night. You see, I had guests here at the apartment, but I suppose you saw that, didn’t you?

Through my brokered reflection sipping on cheap Chilean Malbec, I look out at the apartment directly across the way. The window is dark, empty now for more than a week. The old woman living there had been boxed and carted uptown to an elderly facility, but even so I know you’re still there, behind the safety of the obsidian-like glass. Believe me; I completely understand how distance is required, that a certain level of discretion is mandatory when it comes to secretly watching others. You don’t want the curtain pulled back too far, do you now? It would break the fantasy; open you up to a whole basement full of emotions, the same emotions you unfortunately had to witness yesterday. It’s alright, you can tell me if you noticed; federal law has seen to it that I keep secrets, so what was it exactly you saw? I was crying, yes, I was in one of those moods, but did you see how many of them had followed me home from the hospital. The woman in 1B was there, laboring for hours, sweating out the rest of her personality, attempting to birth a baby that had forfeited its soul several days ago. But she went through the motion like any other mother, eventually sending out across my wood floors a blue baby that slid to a stop like a sea creature beached. It just lay there by the coffee table, inert, mournfully shunned. Maybe you were like the mother and didn’t want to see the nameless child, because she had looked away too—her face wiped clean of tears—until her baby was quietly taken from the room. But these things never fully go away. It’s like the young man in 7C, his digital footprint on Facebook leaving a residue of what he had been before the cable had snapped on the river barge and the counterweight collided with his skull. It was him you saw in the recliner, kept alive with tubes and pumps when a week ago he had only been fed by dreams. He too needed to be taken from the room. Why should we see things like this? He was nothing now because I looked, pried his lids back only to see his eyes owned an emptiness. So that is why I was crying, why I had ignored you and turned the music up, why I had stood in the middle of the room, hugging myself, eyes closed, swaying awkwardly to the rhythm so as to chase away those people from my apartment.

Setting the wine glass on the table, I look hard through my window into yours. I smile and imagine you are smiling back. It feels as if we have found our groove again, doesn’t it. So here, I whisper, slowly taking off my scrubs, you have been patient with me and deserve this.

I watch both the darkened window where I know you sit and the thin image of me slipping free my panties and unhooking my bra. It’s an overlay like joined worlds, our connection. I couldn’t believe I had been so stupid as to be anything more than a passive observer. But even when I’m giving you everything you want, looking in from your darkened room at me naked before you, this delusion will happen again, I’m sure of it. Those people will follow me home from the hospital, they will take up space in my living room, the tears will come and that music will have to be turned up. And I know you. You will be annoyed by this, because it will make you less hidden. I hope so, because you should never stop looking for beauty.