Hungering for Flesh (The Abbey at Skye) #24 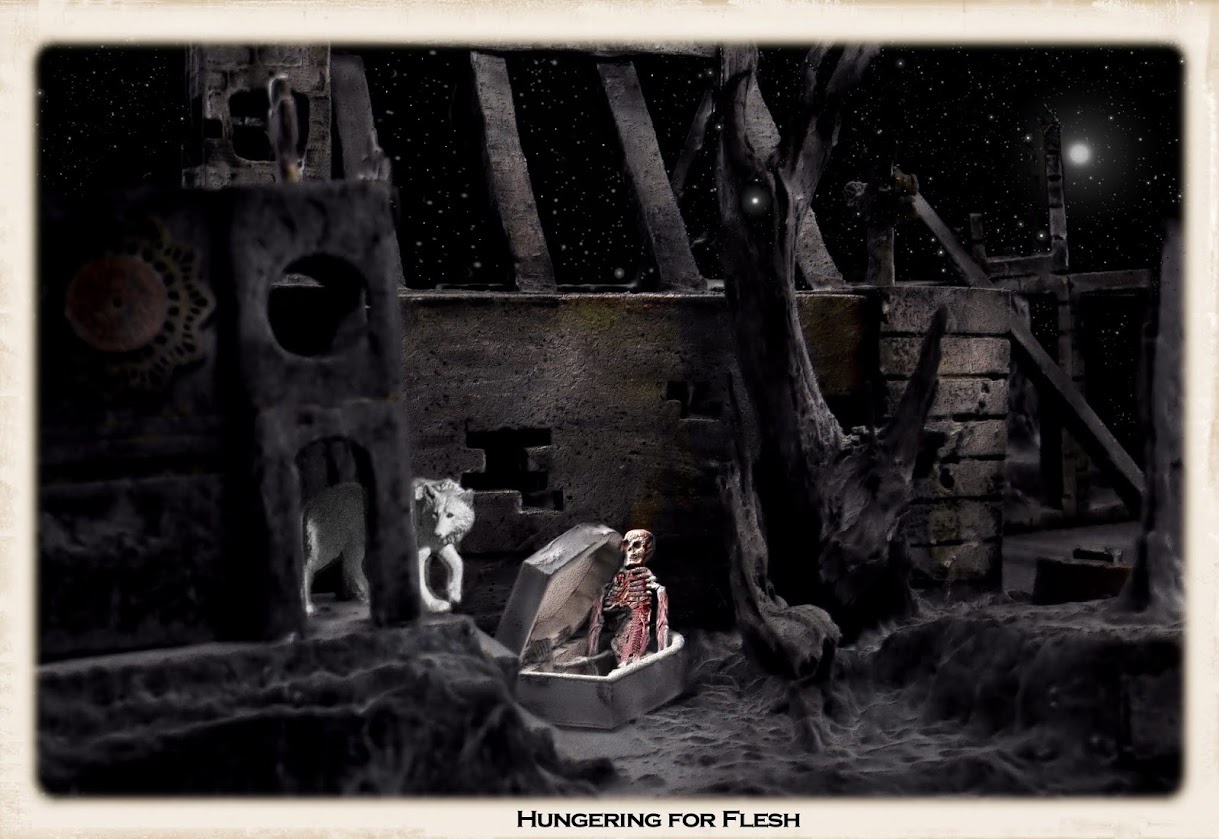 The Abbey at Skye is a scale model of the fictitious ruins of an Abbey on the island of Scottish isle of Skye. The idea of the haunted skeletal remains of a 12th century model and was perfect for exploring different concepts of myths, faeries and spirit beings that make up much of Scottish lore.
It was created in 2016. The model took about 200 hours to create. It was made from styrofoam, clay, and natural items such as driftwood and moss. The inner nave of the church used ceramic tiles and the altar was made from cracked marble. The areas you will see of the church with ruins on them were hand carved into the styrofoam. In several areas there were miniature graffiti and street art added to some of the walls.
It was 5 feet long by 3 feet wide.
The use of items of scale such as the cats and horses were real pieces painted and added as needed. Even the skeletons are real and inserted carefully into the scenes. In places you will note that parts of the abbey have been repositioned, such as the walls. This was done by snapping the styrofoam in places to create ruins that could be moved around or reattached cleanly to the main model. Styrofoam is one of the best tools for creating scale models because most of it can be changed at a moments notice.
You can see developmental photos for the construction below as well as the finished art. It was the first model based project I worked on and was the foundation for understanding still life and digital art as a combined medium for creating art. While some of the ideas could have been rendered completely in the digital medium, I think using a real model for the base of the art gives everything much more depth and takes still life art to a higher level than is usually seen. I've done larger projects since then, but it is closest to my heart because the concept was totally new to me at the time. While the original model was too large to store intact and has long since been dismantled. There are still pieces of it laying around the studio which I use in other projects.
I think the thing that fascinates me most about this series is that each piece of art tells an individual tale about the abbey. If the viewer takes the time to really look at the details, a whole mythos emerges. The concept of the Shadow Tribe is especially enticing to explore further in the future.
The great thing about still life/digital art is that once the original photo work is completed, one can always go back and reexplore the content. So occasionally new work is added as my skill level changes. So visit again!