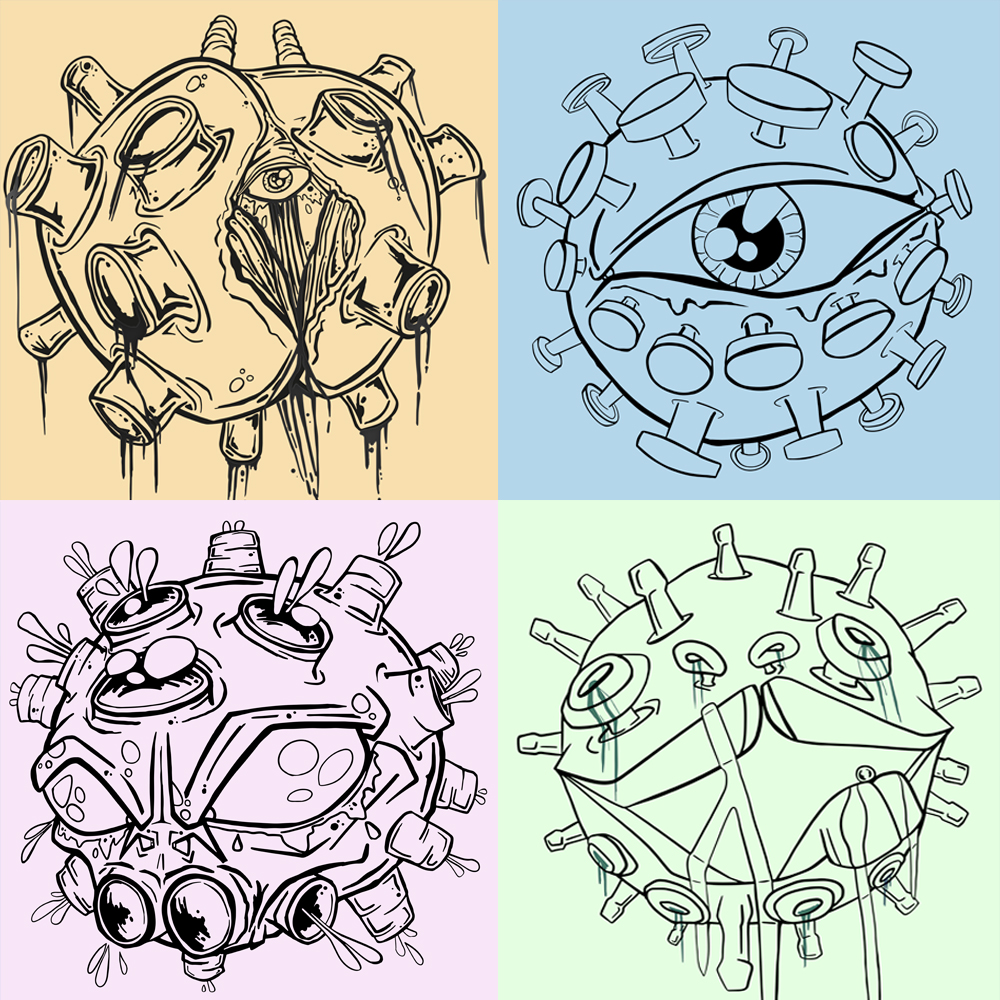 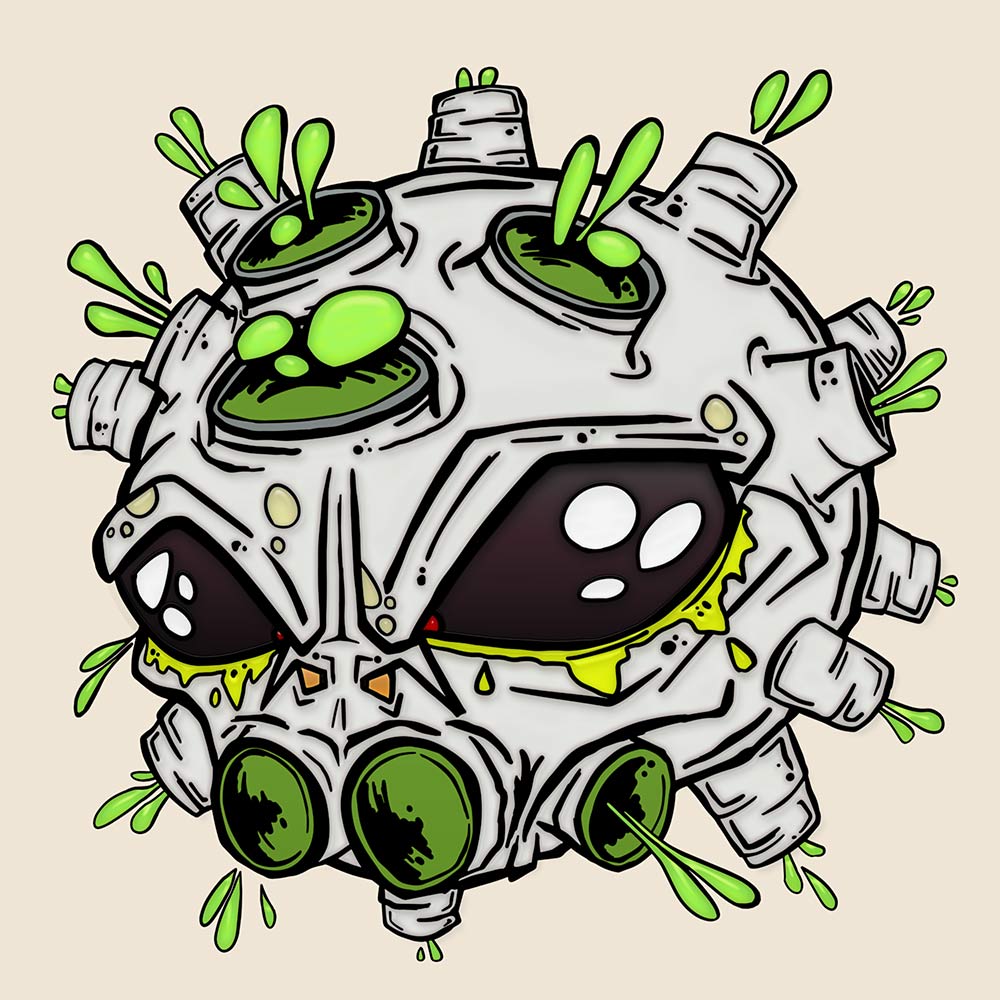 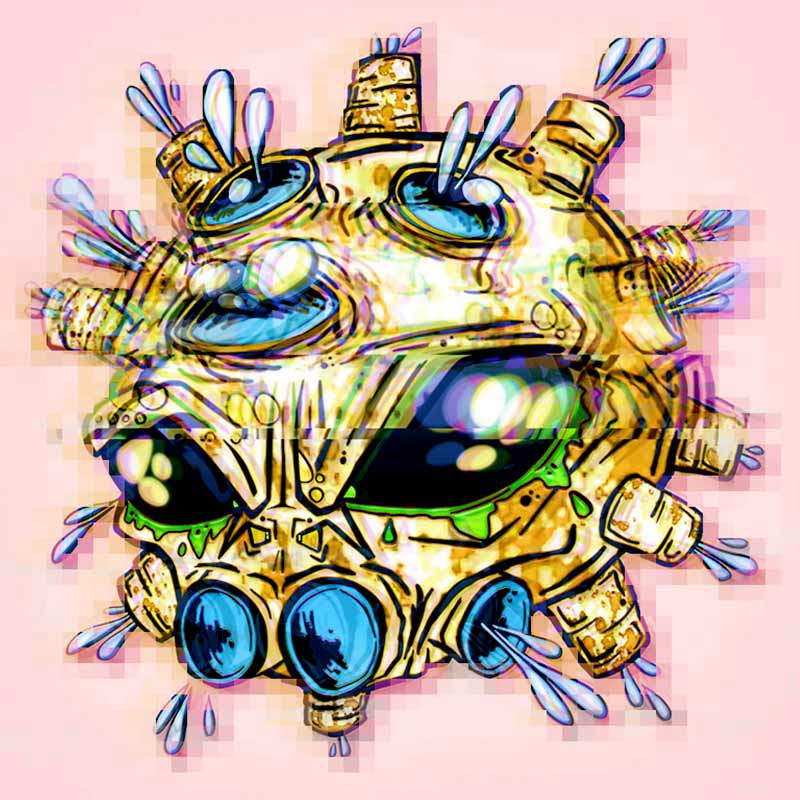 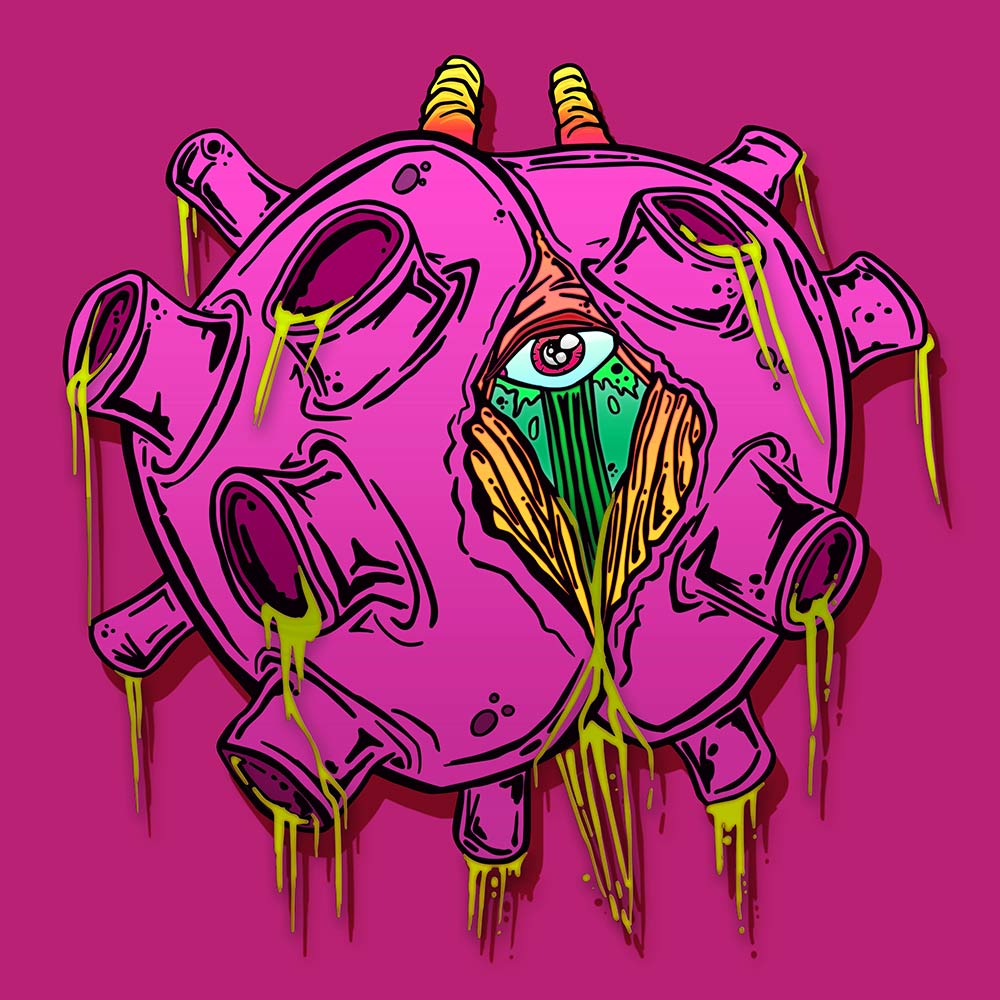 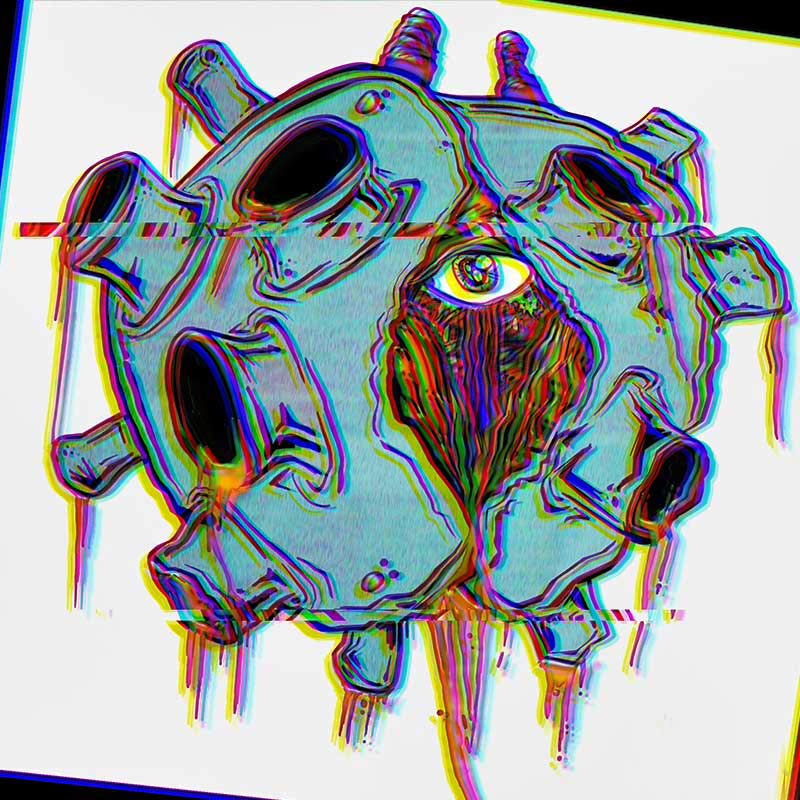 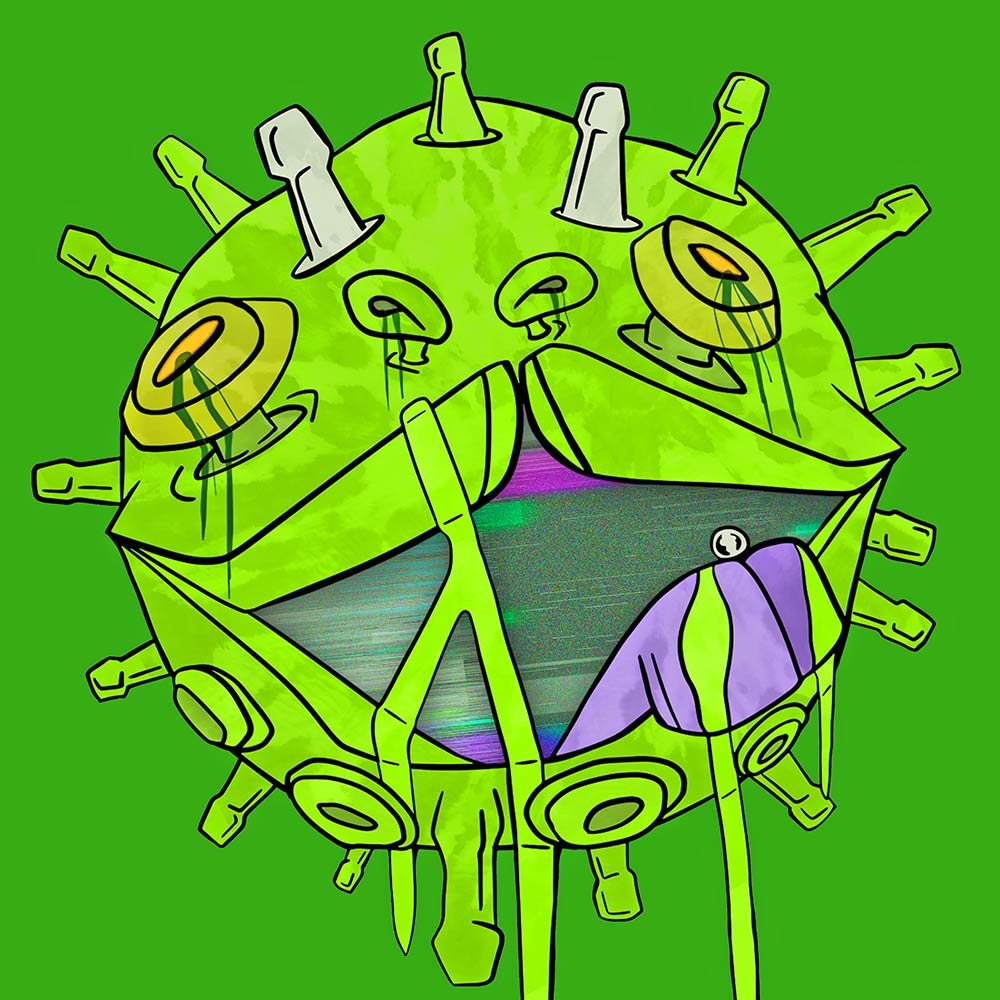 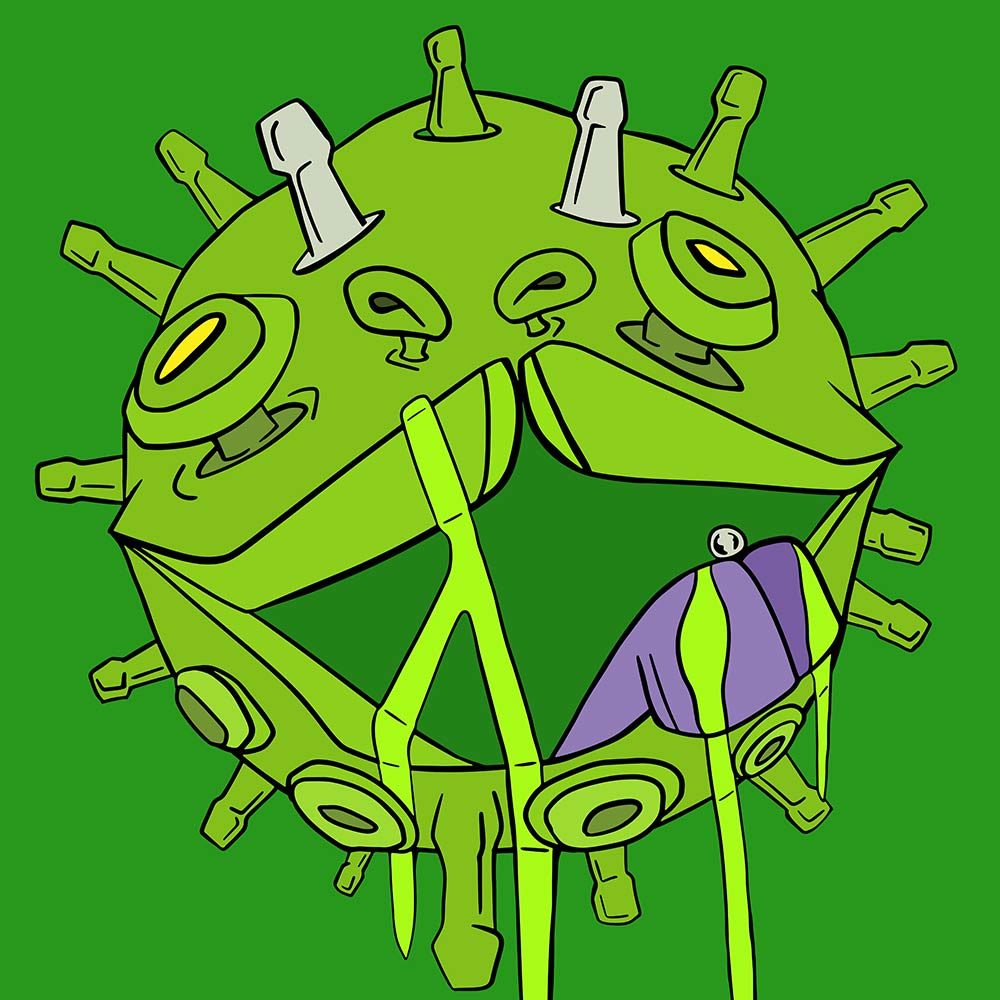 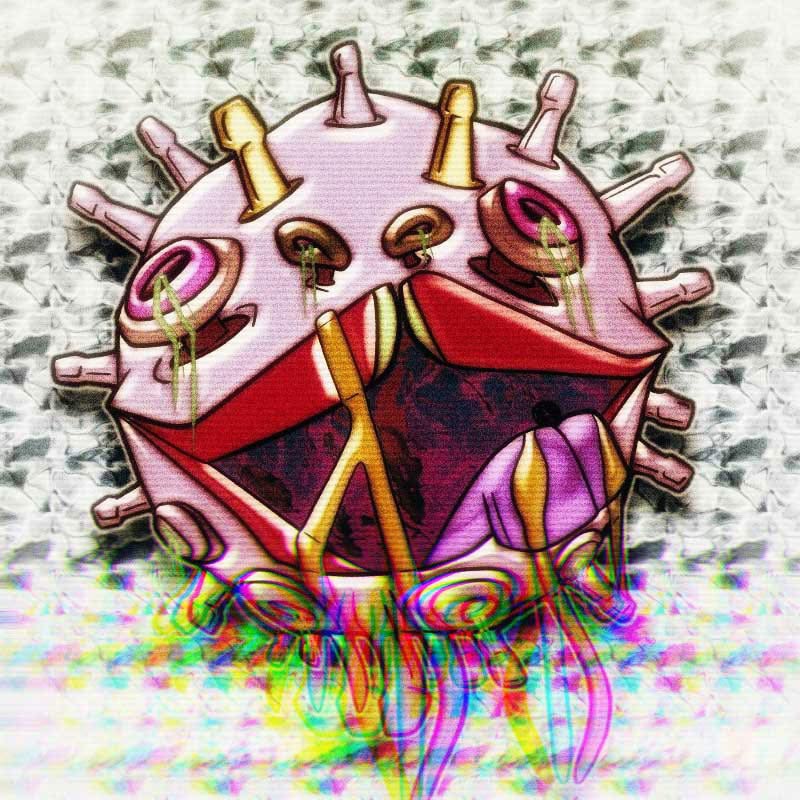 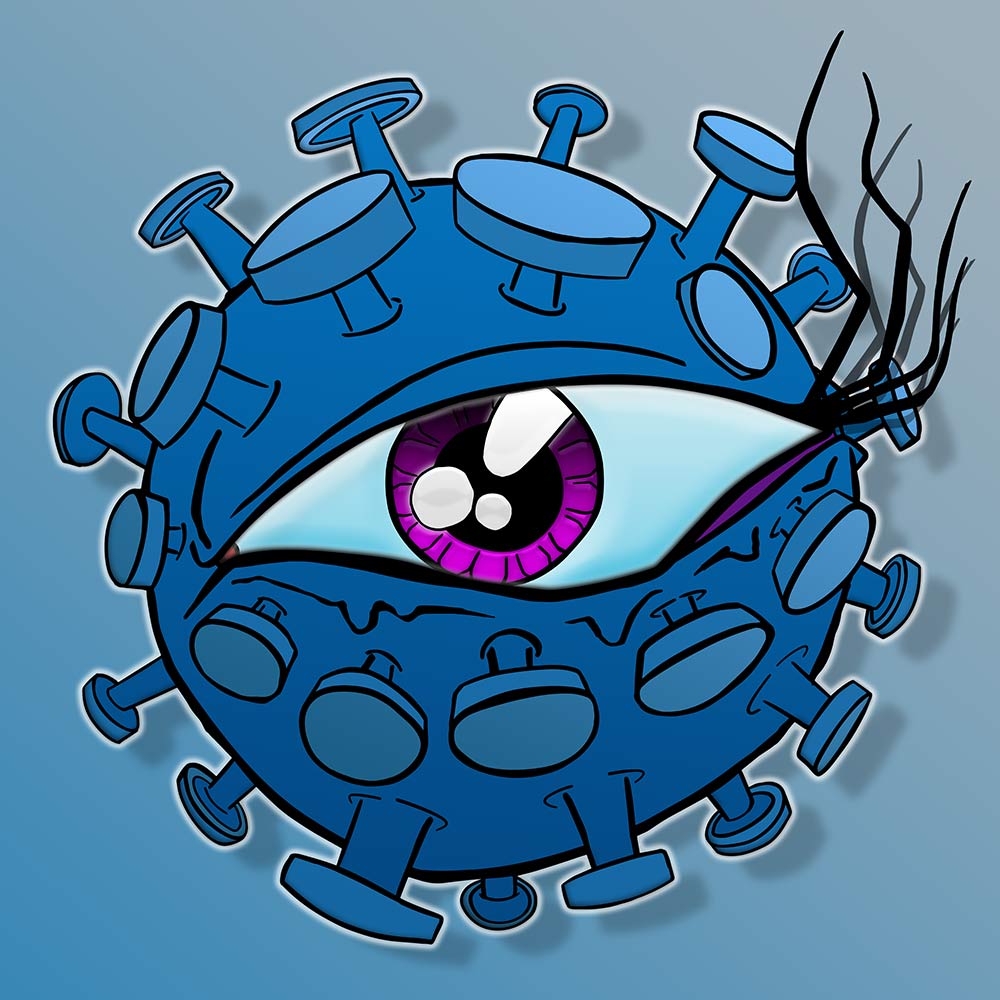 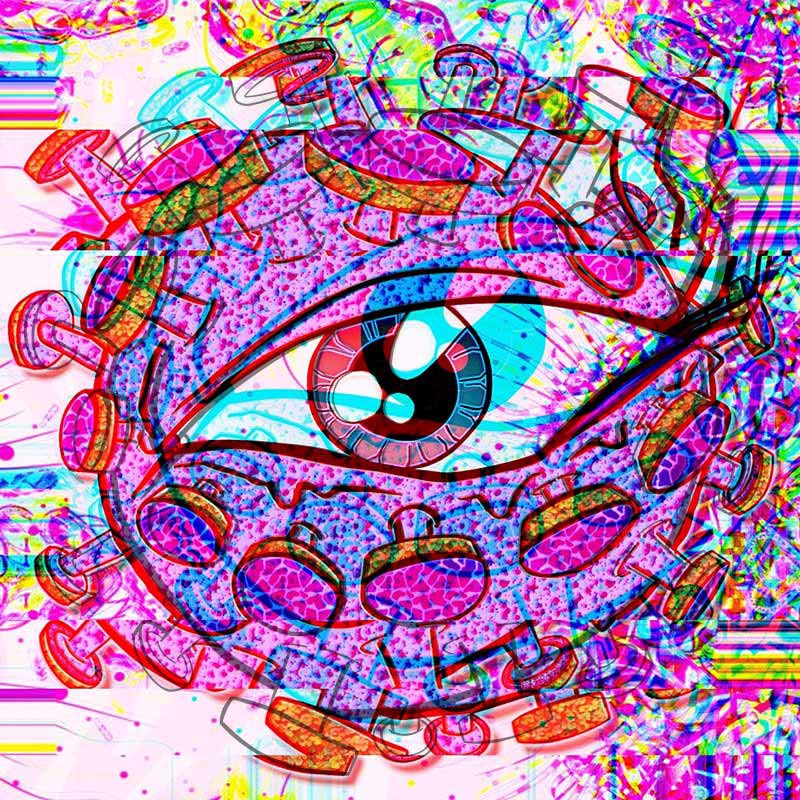 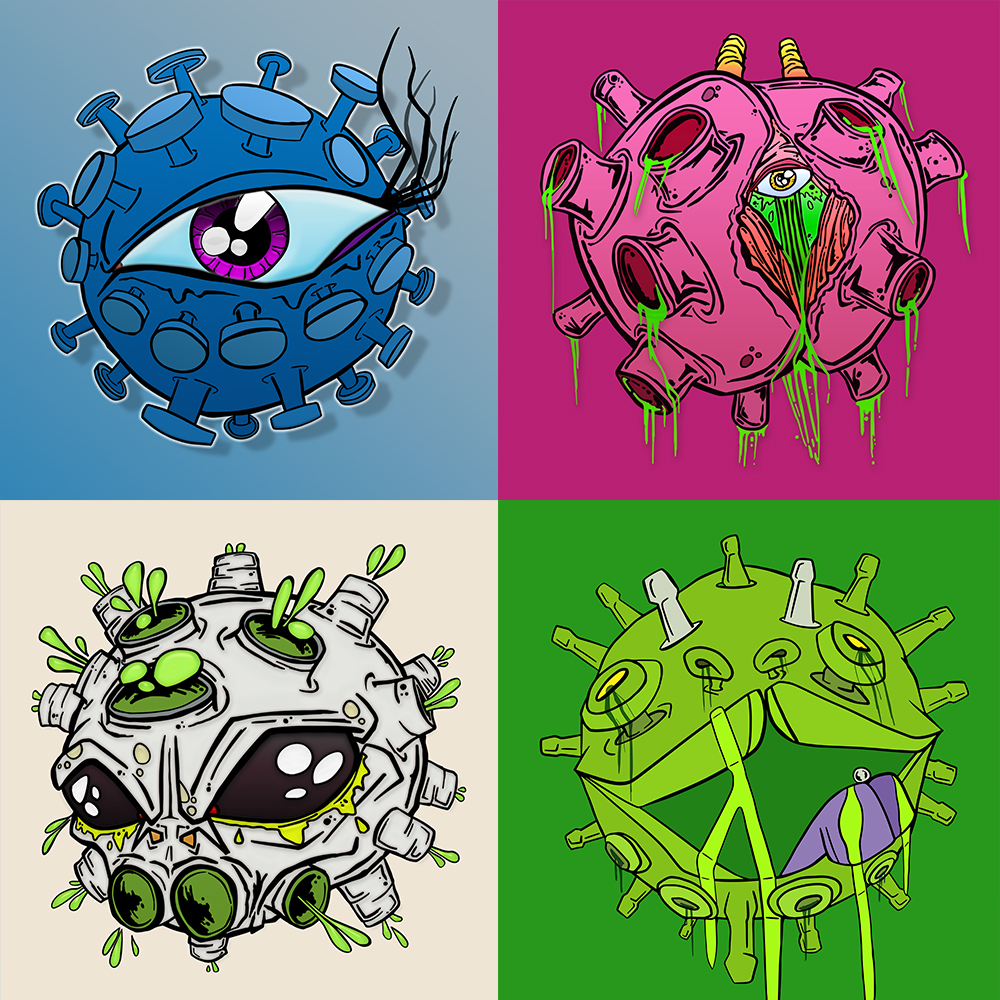 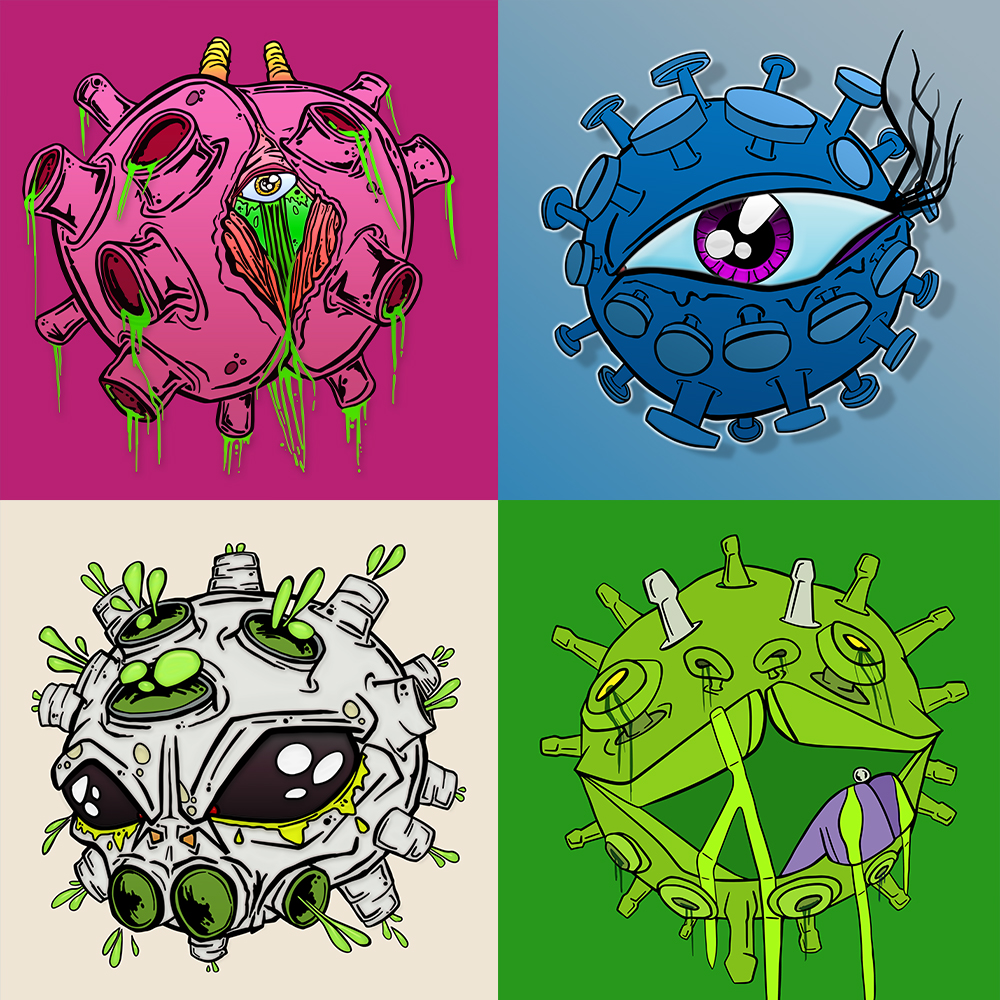 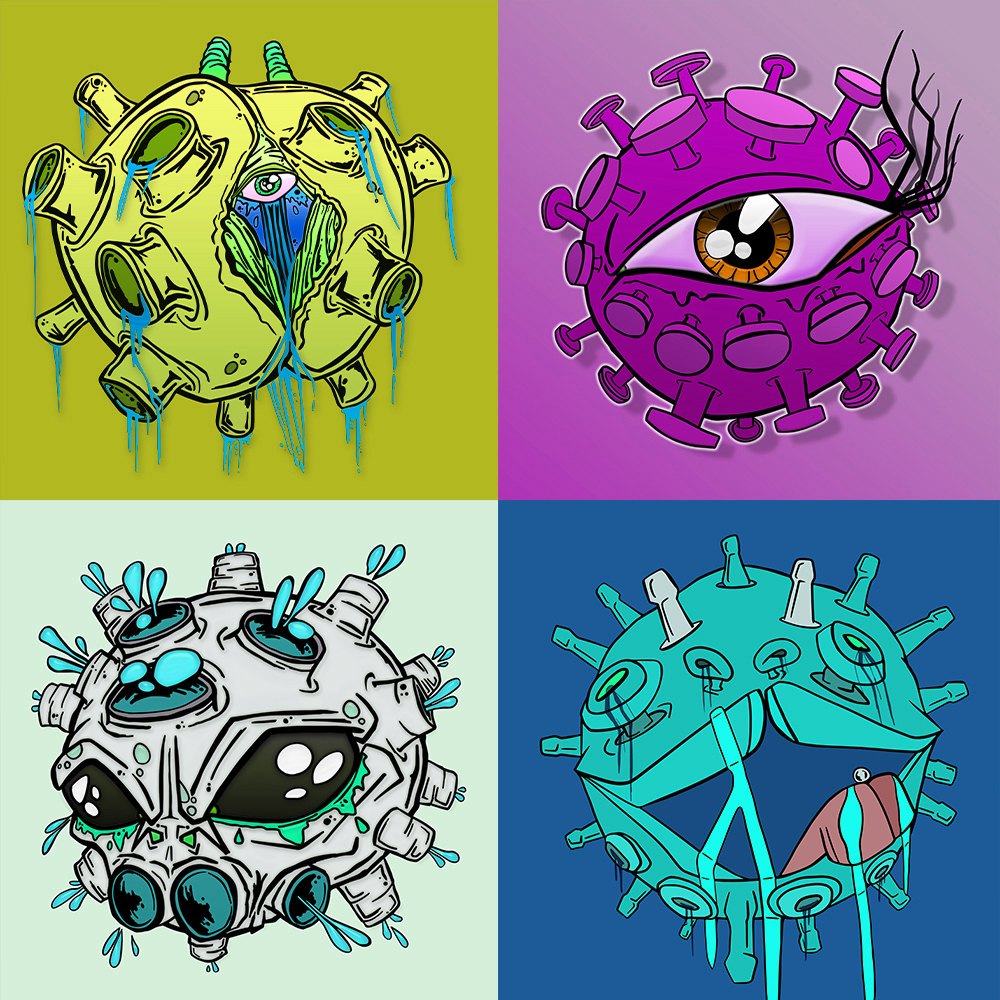 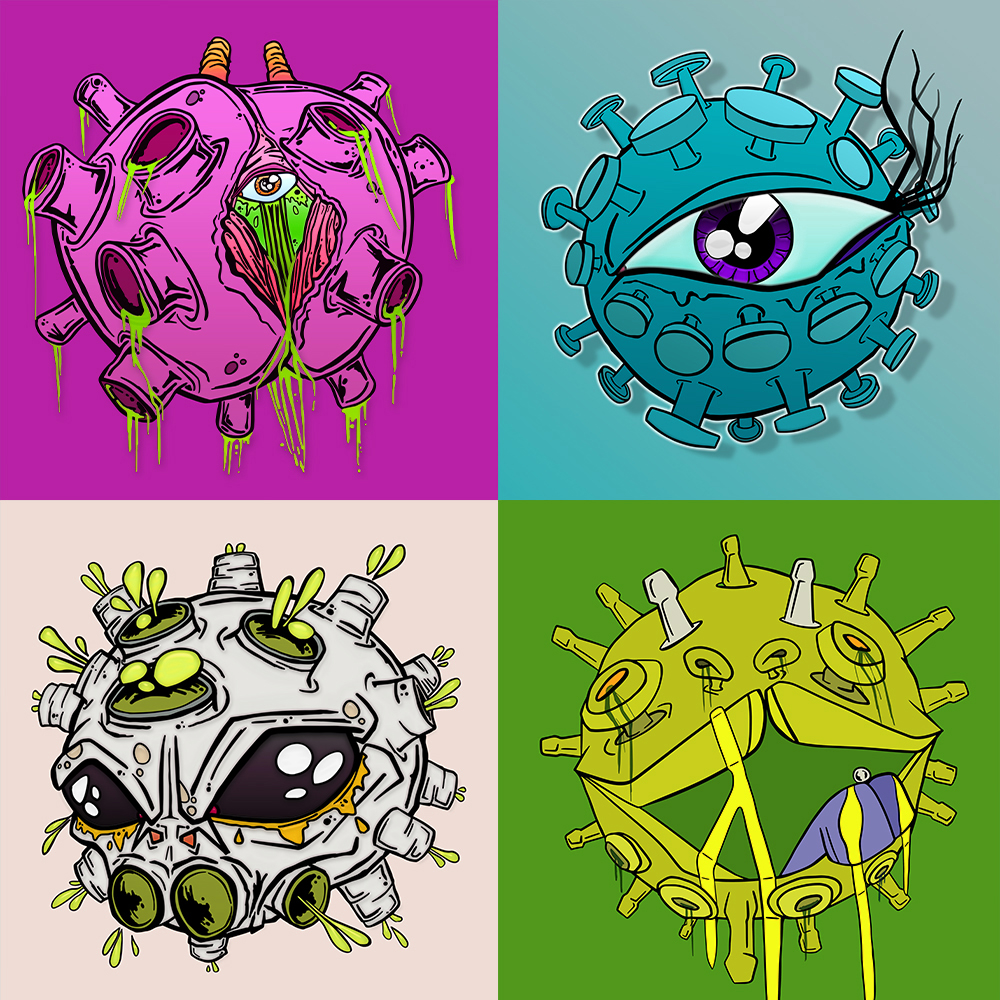 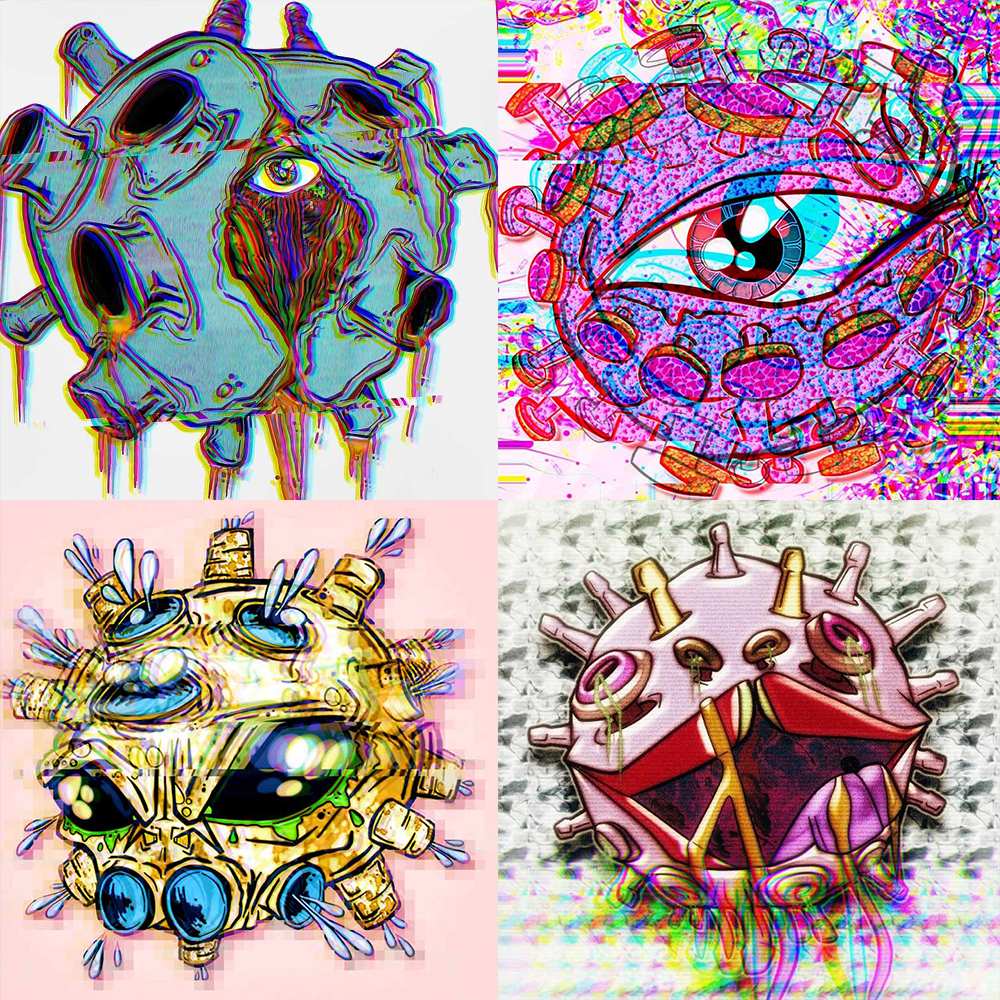 𝐕𝐢𝐫𝐚𝐥 𝐄𝐲𝐞𝐛𝐚𝐥𝐥 👁️ (𝐭𝐨𝐩 𝐫𝐢𝐠𝐡𝐭) – This nano-tech uses the ability to hi-jack a victims retinal and optic nerves. ‘They’ can now control what you see and can also use your eyes as a live-stream feed, effectively turning the host into a mobile CCTV camera.
𝐂𝐨𝐯𝐢𝐝-𝐏𝐮𝐩𝐩𝐲 🐶 (𝐛𝐨𝐭𝐭𝐨𝐦 𝐫𝐢𝐠𝐡𝐭) – Nicknamed the ‘puppy’ due to a playful appearance. In simple terms; the 'puppy virus' reverts the infected into a child like state unable to process anything remotely logical and serious. The smallest of nano-units with an average size of 0.0000003 microns, no known mask can filter it.
𝐂𝐨𝐯𝐢𝐝-𝟔𝟗 🧠 (𝐭𝐨𝐩 𝐥𝐞𝐟𝐭) – Drives the infected into a state of total lust, Covid-69 hi-jacks the hypothalamus and pituitary gland. As such the parts of the brain responsible for reproduction are ‘super-charged’ and the victim is left in a state of over-sexualized frenzy not being able to think or do anything else but find others to pass the virus onto through sexual means.
𝐀𝐥𝐢𝐞𝐧 𝐕𝐢𝐫𝐮𝐬 👽 (𝐛𝐨𝐭𝐭𝐨𝐦 𝐥𝐞𝐟𝐭) – The true origins are unknown, it is by far the strongest extremophile currently recorded. The genetic make up is classified. Conspiracy theorists suggest it is used in tandem with 5G signal to transmit over 5 million data points of human bodily experience to the end user (the Grey aliens)
Despite the way they look, these designs were made with social positivism in mind. I intentionally wanted to use creativity and art as something that could help people throughout the pandemic crisis. Art can be therapeutic, but these images are quite ugly and the meaning dark humoured and satirical, so I wouldn't say that's their purpose. But I was really interested in creating art that would benefit others in the crisis, and so the Human Malware series was conceived.
Initially I considered finalising the designs and then releasing them online, to be used by whomever to remix or to be used in a different construct (i.e. computer game) or simply used as a momentary distraction as a colouring book (for kids with parental approval only, some of the designs are quite explicit)
Since then the design have been projected onto buildings, used on a musicians soundcloud art, I have produced items which they appear on and all profits are being donated to "NHS Charities Together"
By artist intent and by the nature of digtial art and how portable it is, these pieces are meant to be adaptive and trans-formative works, i hope they go out and for lack of better word go viral.
If in the meantime you are happy with their current incarnation you can buy them at www.vinnikiniki.com/shop
Profits from sales are being donated to support the brave nurses and doctors on the frontline of the pandemic - ‘I will be donating 100% of all sales profits from these coronavirus inspired products to the ‘NHS Charities Together‘ (DISCLAIMER: I am not playing down the gravity of Covid-19 pandemic)