Please see the following link for a basic explanation of this project.

This is a slow project mostly due to the fact that I will be waiting for participating artists to submit their information before I can seal each one of the time capsules. There are 25 in total, 5 on each level of the sculpture, perhaps 2 more at the very top once its complete. Here are the work in progress photos so far. 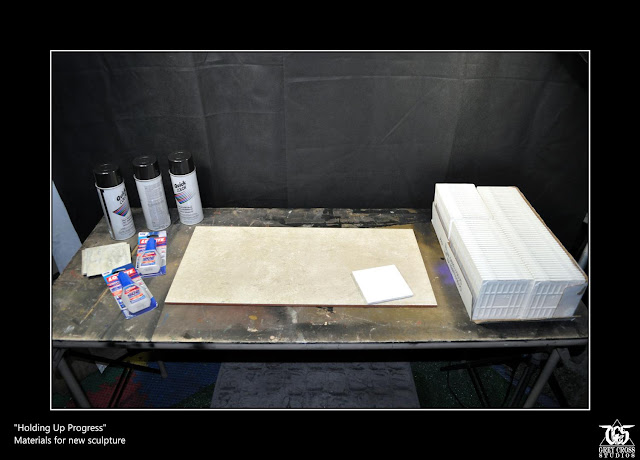 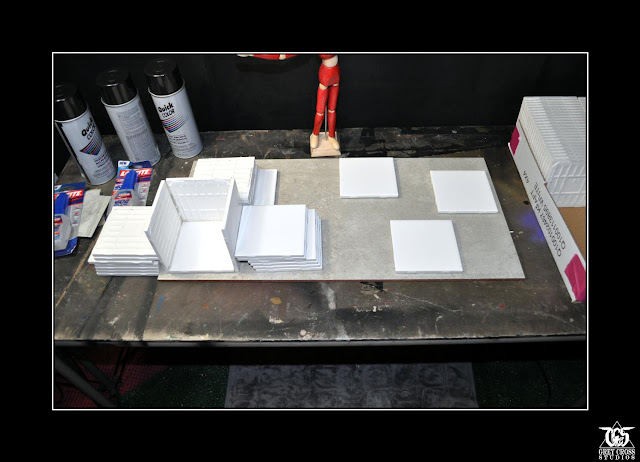 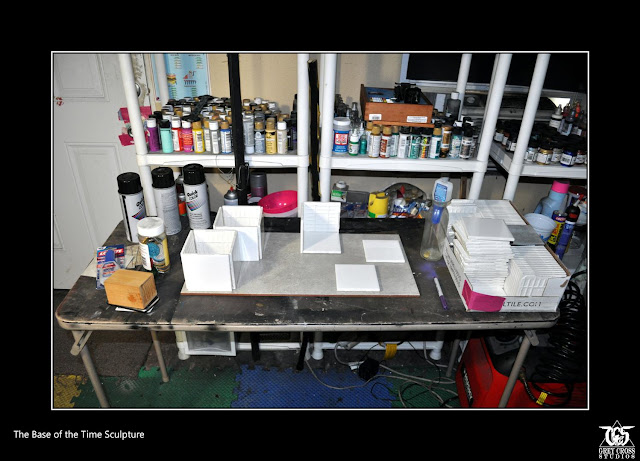 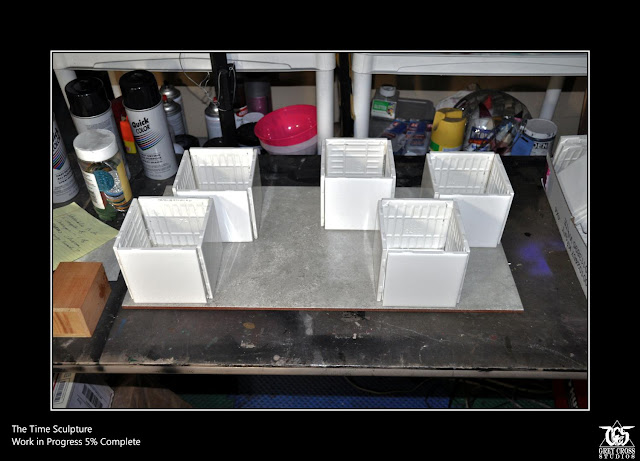 My original concept for this piece was to seal each of the cubes with rock grout once they were filled, but I think I am going to vary that and seal them with foaming glue instead. It dries to a hard surface that is almost as hard as rock and should seal the cubes, but it will adda  dimension of other worldliness to the sculpture when complete. The purpose of course is to make a great piece of art first, filled with secrets. Using the foaming glue I can create something akin to a living breathing organism surrounding the cubes, leaving the topmost part of the cube free of glue so that at some point in the future it can be opened. We shall see how it proceeds.

If you are an artist interested in participating, please follow the link at the top of the page to the artists instructions.

The following items are going into my personal time capsule which will be the last one to be opened. The items include my first I-Phone with a shattered screen. A 50th anniversary Mardi Gras coin for the Krewe of Petronius which is the oldest gay Mardi Gras group in the world. Some rune stones. A Mardi Gras doubloon. My mothers drivers license. There is also a flash drive with several hundred photos of my work on it. I don't know if they will even be able to read a flashdrive in the future. But using the past as a reference, we can still utilize technology from the 1800's like tin type cameras, so I am hoping someone will have the resources to open the files placed there and that the data will not have degraded by then. There is really no way to know for sure.

Most important of all is a four part letter written by me to those in the future. The letter has been reduced to 3" squares which will be laminated. The four laminated pieces will then be sealed once again in an engraved laminate casing made from 4" floor laminate tiles. It is my hope that they will still be readable when the capsule is opened.

There are four more capsules on the base that are awaiting information from various artists before they are sealed. 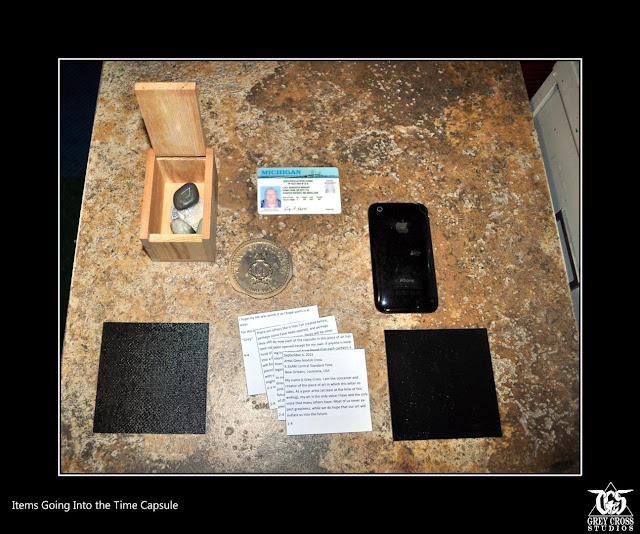 This is the faceplate for the sculpture. Its been etched into laminate and painted in metallics. I've not decided for sure yet how it will be added to the sculpture. It will be sealed though in hopes the paint stays in place. If it doesn't at least the etching will remain beneath the paint. 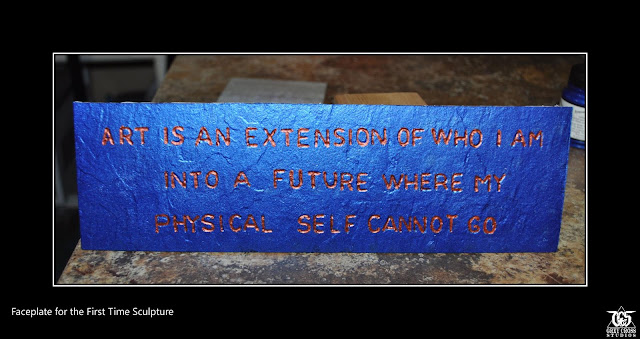 Here is the laminated bio that will be clipped down to fit within the time capsule. Each incoming artists bio will be added in this way. 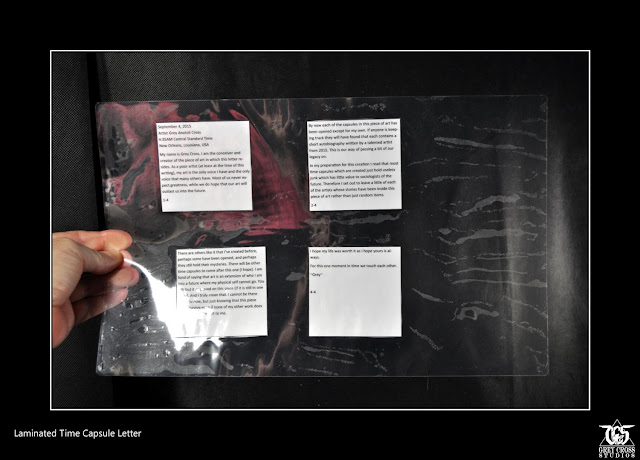 Here you see the clipped down artists bio ready for sealing. I've taken no chances here. I've enclosed the 4 laminated portions of the bio into a plastic bag in case any of the glue being used should get on the bios. This way the glue touches the outer wrapper and will not degrade the contents. You can see it laying on the etched laminate tile ready to be enclosed within. 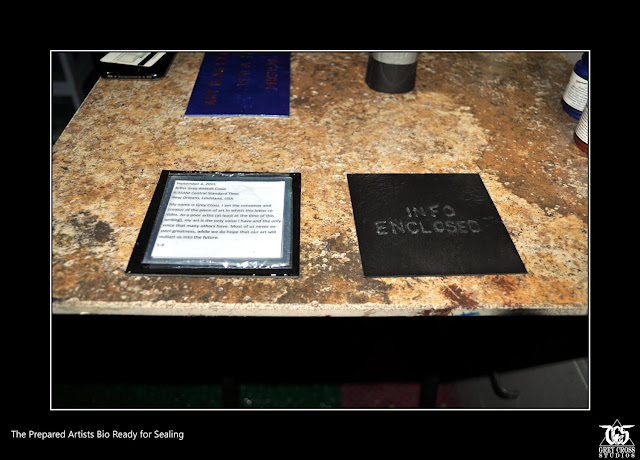 Here you can see my own cube being filled with the items that will remain in the time capsule. The last thing that will be placed in it will be the bio container once its ready to go and then the capsule will be sealed. 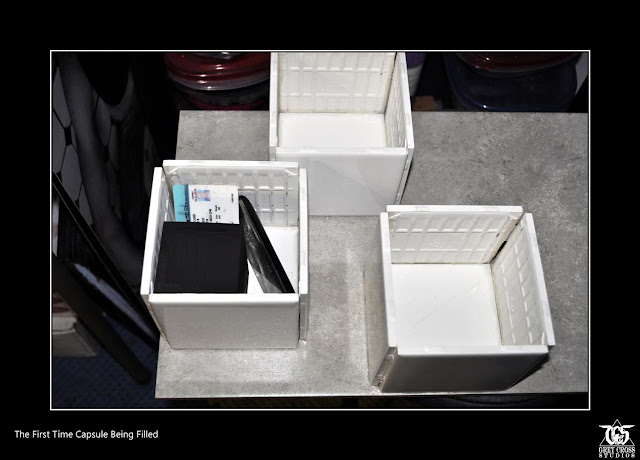 Here is the final sealed Bio-packet. Within it rests the laminated biographical letter composed for my time capsule. Its been sealed on the edges with a waterproof glue that should keep the contents safe and secure within the time capsule. Every capsule will contain one of these for the artist the capsule has been designated for. 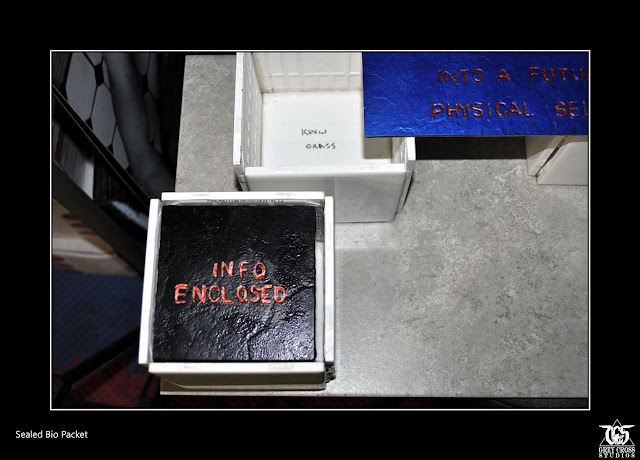 Here is the first completed Time Capsule. Within it resides my personal information and Bio-packet. This is the first of two sealings. The first was done with a rubberized waterproofed heavy glue that should keep the contents safe. The second will come later when all the cubes are sealed with a hard as stone foaming glue. This will assure added protection from the elements and make sure that everything stays closed until someone makes an active effort to break into any of the cubes. It will also act as part of the design of the sculpture, giving it a more surreal nature once completed. 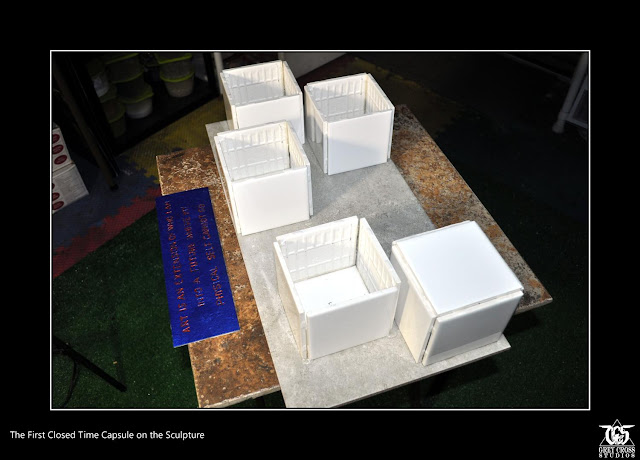 The remaining first tier of artists has now been confirmed and cubes have been designated for each pending their Bio-packet information and flash drives (for those submitting one). I will now focus on confirming artists for the second tier cubes while awaiting first tier info. 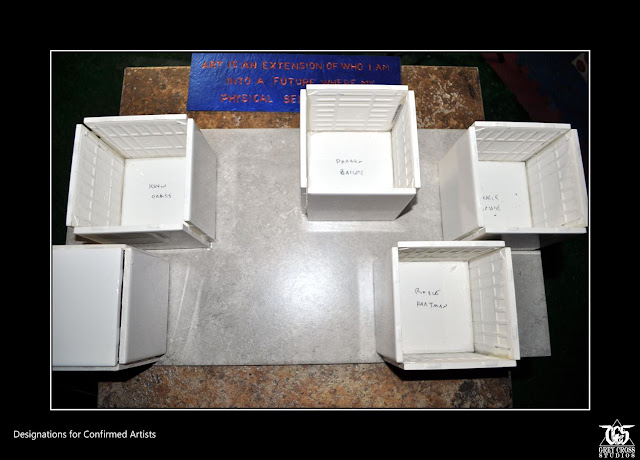 My thanks to artists Kevin Grass and Jackie Janisse for mailing their flash drives to me for inclusion in the Time Sculpture. Today I bought small sealed about plastic boxes that will contain each drive and be placed in each time cube to keep them safe over the years. The complication arises that I don't want the flash drive to bounce around in the box. I cannot pack it with newspaper as paper will degrade over time and may get in the mechanism of the drive. Using any plastic substance may also degrade and melt over time, again getting into the mechanism. So with this in mind, the best substance I can think of to pack it tightly is small stones, packed in around it to keep it snug and not allow it to bounce. You can see here Kevin's drive is now nestled between the stones. The only thing is that I will have to engrave on the top of each that there is something within it so they don't think I sent them a box of rocks through time. Once done each box will be sealed tightly against water damage. 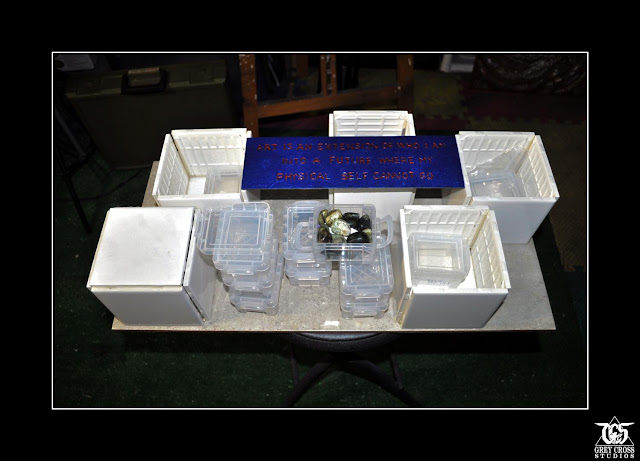