The Eight Foot Monster In The Studio

Right around the beginning of 2014 I built a monster canvas that measured 8 feet long by 4 feet high. It took me a week to build from scratch. Unbeknownst to me at the time, I was already pretty ill. My strength was ebbing quickly and I found this piece to be particularly challenging without really realizing why. While I went on to produce one other piece (Pristine) afterwards, these pieces would be the last done before I fell so ill that I could no longer work at the steady pace that I was always known for. The eight foot canvas which came to be known as "Souls of the Ocean" was an underwater piece that used hot wax to create ocean currents and a ship graveyard strewn with debris and a real ships chain extending down the center of the canvas. (See photo) 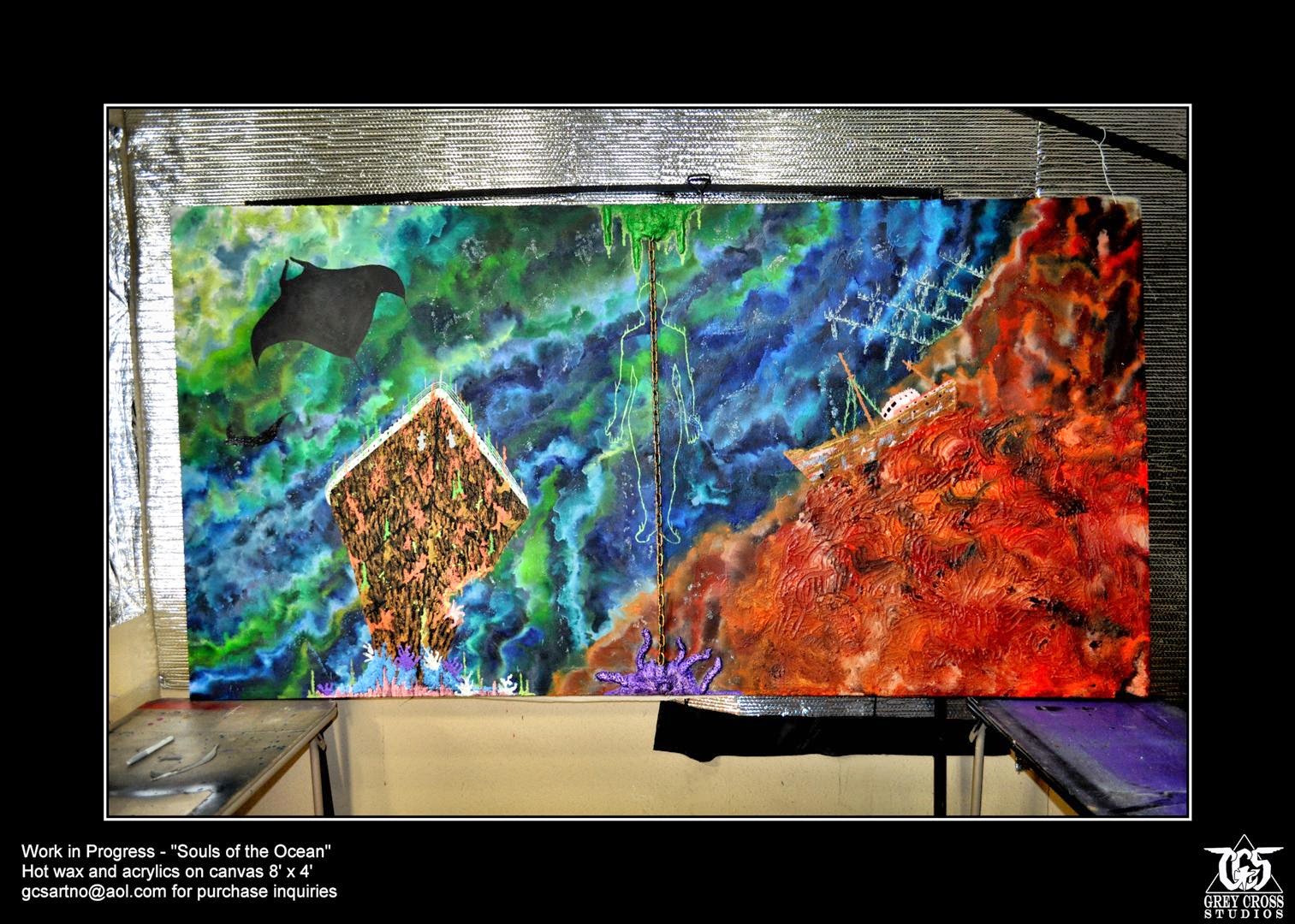 The piece fought me the whole time I worked on it. There was no flow, none of my usual joy in creating, no inspiration. In retrospect I know now that my body was fighting other things and as a consequence the art suffered. When I completed it finally, it was moved into my storage room so it wasn't taking up so much space in the studio and there it remains to this day. Unlike all my other work, it was never photographed, never described, never anything. The largest piece I'd thus far created and it was cast aside and forgotten about.

Now with some of my work, I may lose the inspiration or find the piece wasn't going where I wanted it to go. These pieces usually got placed aside and re-evaluated at a later time. I can happily say that 99% of the things I've created were completed even if they sat for a year waiting for the proper inspiration to hit. In some cases with stunning success (at least by my terms). But poor Souls of the Ocean has never invoked that desire in me. As it stands, it is a complete work. It was not half finished. I managed to complete it from one end to the other. But it lacks that spark of emotion that I try to place in every piece of art I create. Its "just" a painting.

Now that I am completely well again, I've created no less than a dozen pieces since my recovery, challenging myself over and over again to create something new and unusual and push my skills to their limits. My art is like a rubiks cube to me. I present myself with a nearly impossible challenge and find ways to make it work. The latest piece "The Winter Fortress" has pushed me so hard and had so many obstacles that I've been about ready to crush it several times, but the spark of inspiration is present and I've become (I hope) a better artist for it.

But I feel I've done Souls of the Ocean an injustice. Yet in its present completed form, its like a ship in a bottle, there seems to be no way to remove it. So I've decided once The Winter Fortress is completed, that I am going to break the damn bottle. I rarely destroy something once its completed, but My intention (I think) is to paint over it and create a totally new piece in its place. I have no clue what it will be yet and I have no intentions of destroying it and knocking the frame down. That would do no justice to the original piece which will still exist beneath its new face as a memorial to a hard time in my life. I may even leave elements of its original form in place, but its time to create something new.

When I recovered from being sick, the Pristine piece was still sitting on my easel. I had completed it, but had done little else with it. I discussed it with my partner and asked his thoughts on whether I should do more with it and he had the wisdom to point out to me that it represented the artist that I was, and that now my art would be slightly or perhaps radically different than what I had created pre-sickness. And he was indeed right. There is a new life to my work that was not present before and Pristine the representation of that in between place where I crossed over from one life to another. Pristine was officially closed and photographed and added to my portfolio. Now its time to tackle that one last piece that represents my old world, and bring it with me into my new. That is if I ever get The Winter Fortress finished!

And yes, for those that follow these things, this is the first entry for the new blog. Feel free to post comments and thoughts here or anywhere else in my vast online universe.

I hope your art challenges you and grows with you!