Tales of the City Planner

The act or process of imparting or acquiring general knowledge,developing the powers of reasoning and judgment.


It will never cease to amaze me how much I learn when I am creating art. No, I don't mean artistic skills. Those come naturally with every single piece I create. What I am talking about is peripheral knowledge. Very much like a writer that has to do research on a given subject before writing his/her novel, I find myself more and more having to do the same.

For example, on "Living on the Edge of Time" sculpture, I spent a good amount of time researching ancient ruined city from the dawn of time. I learned how ancients built their temples, how they related to the landmasses around them and how their environment helped craft the cities in which they lived. I also spent some time researching earthquake faults and how land reacts during after a major earthquake.

In the piece I just finished "The Winter Fortress" I spent a great deal of time looking at rock formations, understanding geology and how rocks and mountains are formed. I also spent a large amount of time researching European castles and fortresses.

As I try very hard to understand the process of how I create and how others create, I found this enlightening because I'd never really considered that aspect of the process before.

It struck home during a conversation about my most recent piece. This piece is best described as a massive inner city sculpture, complete with streets, skyscrapers, etc. Except the piece has a political twist that will become more and more evident as it develops. But the simple fact is, I've had to really educate myself on the intricacies of city planning and engineering in order to get the basics correct. For example, in one corner is a parking lot. It wasn't enough to want to put some white lines on it signifying spots. I wanted to make sure that the traffic flow and yellow arrows were correct and that (in my mind at least) the cars weren't bumping into each other. OK, perhaps this is a bit anal, but its also a lot of fun! 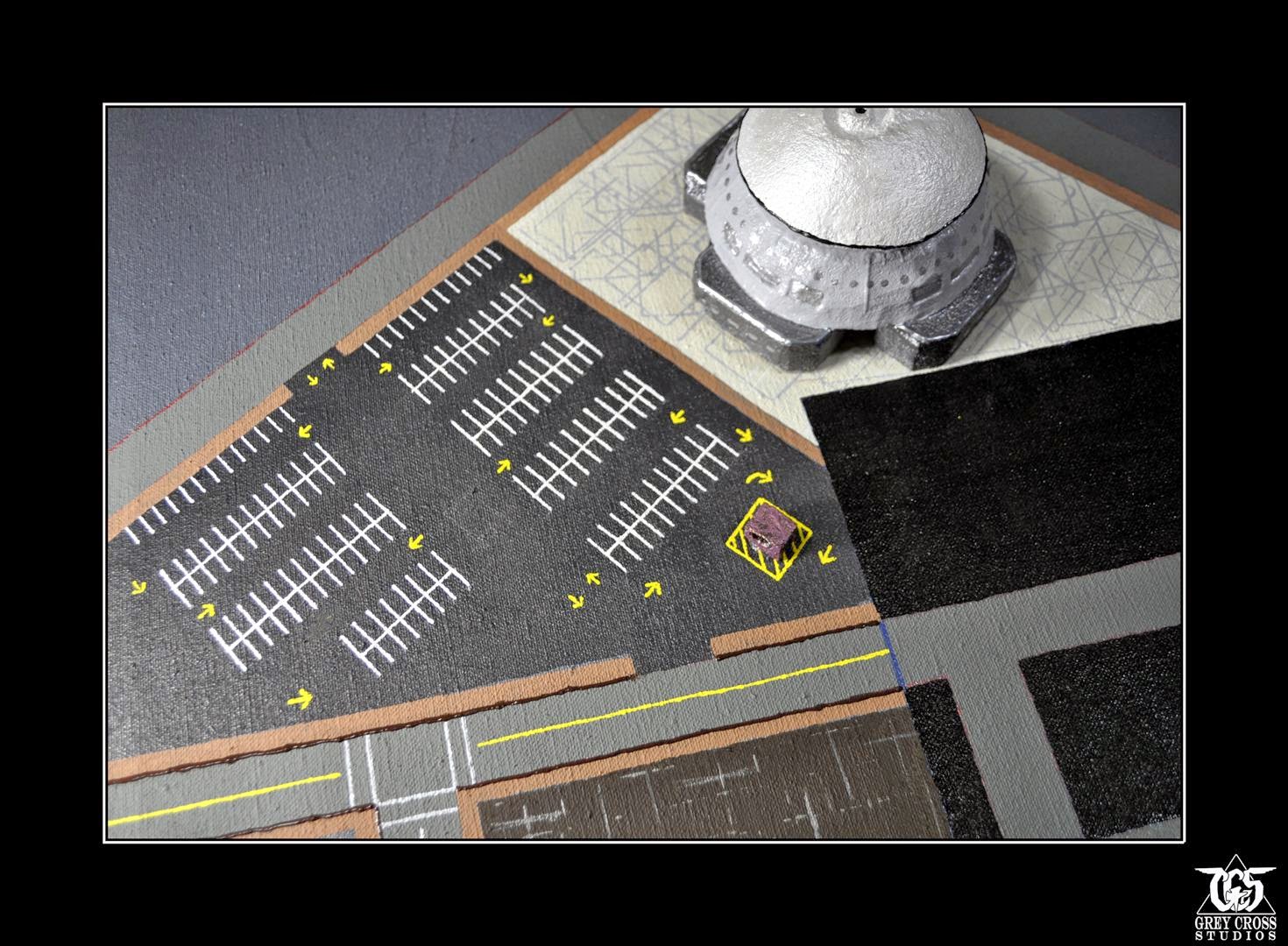 Its very true, sometimes getting to caught up in the small aspects can stop us in our tracks. But learning about something is not a flaw. With this piece I have so far reacquainted myself with a whole host of trivia that I had taken for granted. Street lines! Who really thinks about street lines??? We learn about the basics of what dotted lines and solid lines mean when we learn to drive, but it becomes an rote skill within us that we never even think about again. But I wanted to make sure I understood the fundamentals again so that I didn't end up creating streets where an engineer would come along 10 years from now look at the finished sculpture and say "oh lord! This is so unrealistic! These cars would all crash into each other!" Now my streets all make sense and that engineer of the future won't scoff at me.

I guess the moral of this story is "Attention to detail is fine. Becoming so anal that it stops you in your tracks is NOT fine." Attention to detail can create the illusion of reality that is so important in some aspects of art. If your painting a jungle scene, don't plop a Canadian Spruce down in the middle of it unless, your doing so with a reason. A purple Banana in a fruit bowl painting may be important to the message or abstraction your trying to impart to the viewer. Sometimes thinking through a creation is important. Even Jackson Pollock had a method to where the splatters were placed.