Walking in the City of the Dead - The Sculpture

New Orleans graveyards are like no others. Because of the water table, in much of the surrounding land it is nearly impossible to dig a six foot hole and hope a body won't end up under water. Above ground family crypts and hot boxes line our cemeteries and create miniature cities of memorial to the departed.

I've been fortunate as a professional photographer to capture images in many of the Cities of the Dead. Images as simple as a crypt under the full moon...

Or glimpses of the disjointed remains of the dead.... 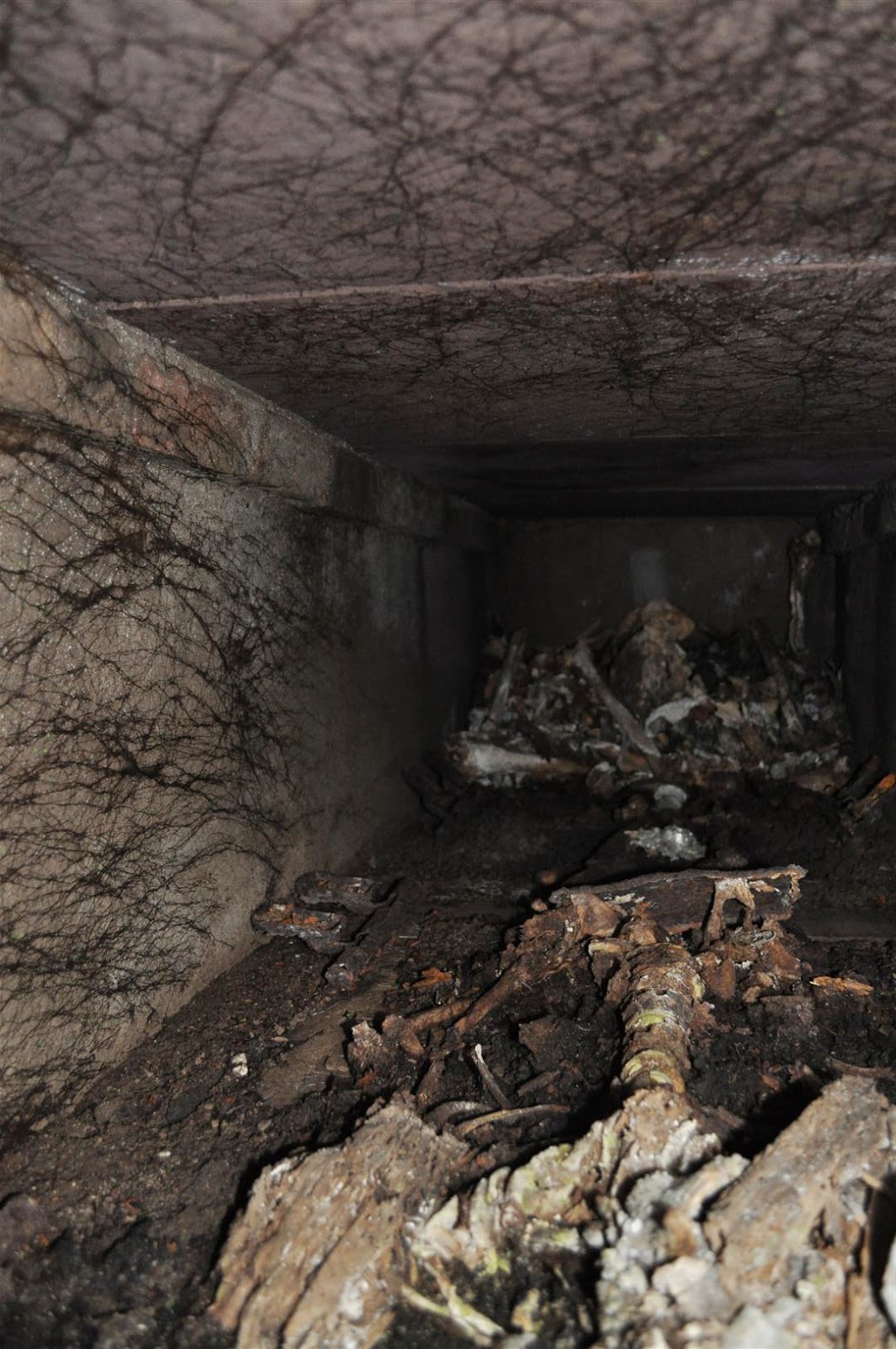 To odd orbs wandering the streets of the dead at night..... 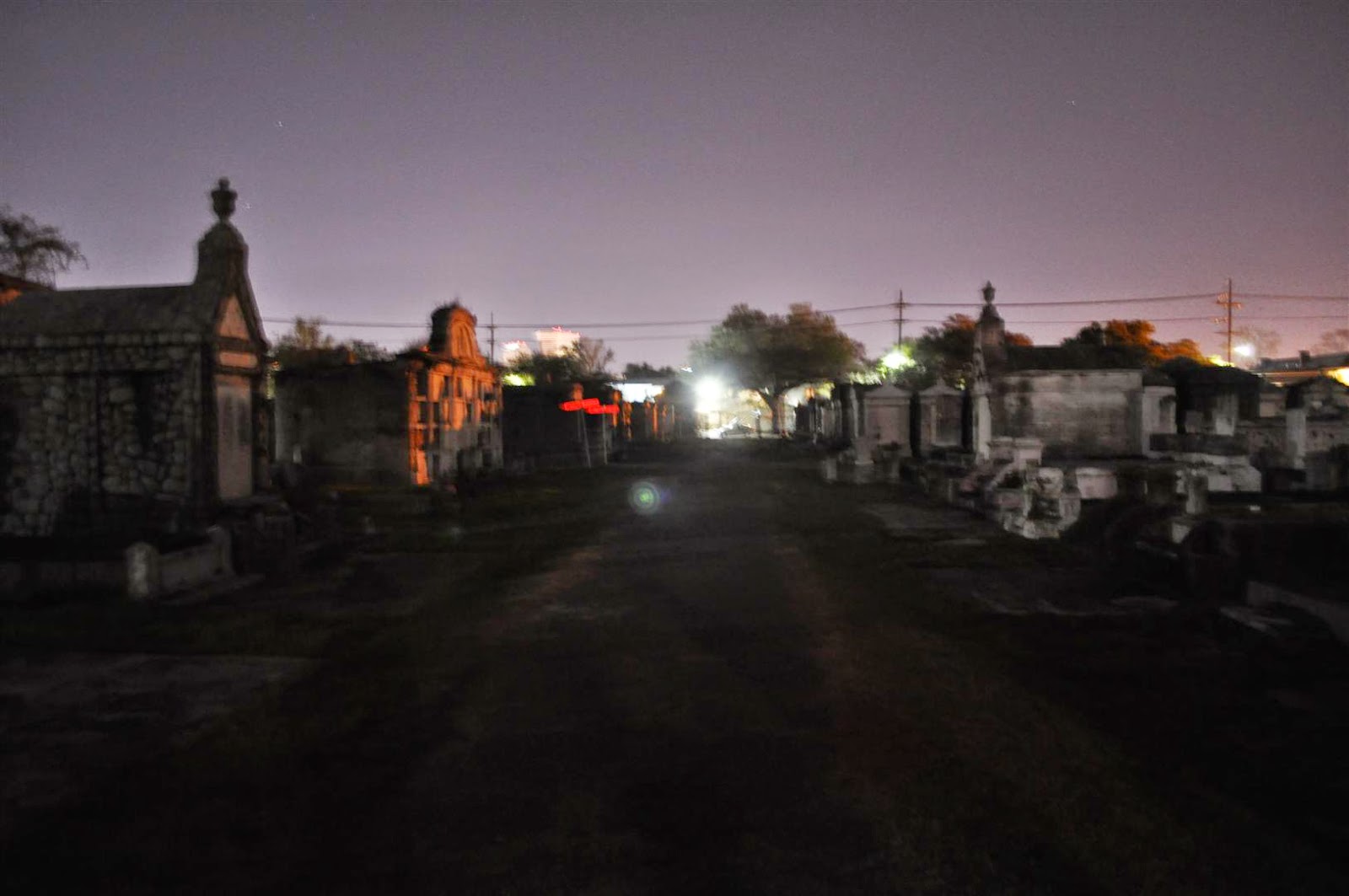 These are all parts of the experience of the Cities of the Dead.

A few months back I began working on a surreal set of images aptly named "Walking in the City of the Dead" with the intentions at some point of putting them into a book. You can see the photo work here.
This ongoing photo series will be added to I am sure in the coming months and years.

At the time I began this photo series I had a great desire to also do a large scale sculpture of a graveyard. Unfortunately other projects got in the way until now. But now I am beginning a 6 foot sculpture that will also be named "Walking in the City of the Dead"

The completed work will measure 6 feet long by 4 feet wide, resting on a 1 inch deep frame. Like many of my sculptures this piece will be made to hang on a wall as if you were looking down into the cemetery from above.

It will incorporate details from many of my photos and will use real graveyard dirt obtained from several locations around the city. The dirt before it is used will go through an authentic voodoo blessing and be laid on a New Orleans altar prior to being added to the sculpture. So when complete, the fresh graves you will see throughout the piece will use real graveyard dirt to cover them. At no time will I use real bones or break the sanctity of any grave. The dirt will be obtained legally in small quantities from multiple cemeteries in order to not create any holes or desecrate any graves. When the piece is completed it will also go through a blessing before being opened for purchase.

When it is completed, several signed prints from the photo series will also be offered with it.

With that said, if you would like to follow the development of the piece, you can do so through twitter by going to the hashtag #GCSart100

All details are being shared there with special emphasis on the artistic process. Please feel free to comment back to me here on the blog or via tweets to my twitter name at: @GreyCrossStudio

As of the time of this writing, I am 2 days into the creative process. Here is a current photo of the sculpture as of Saturday 03-14-15 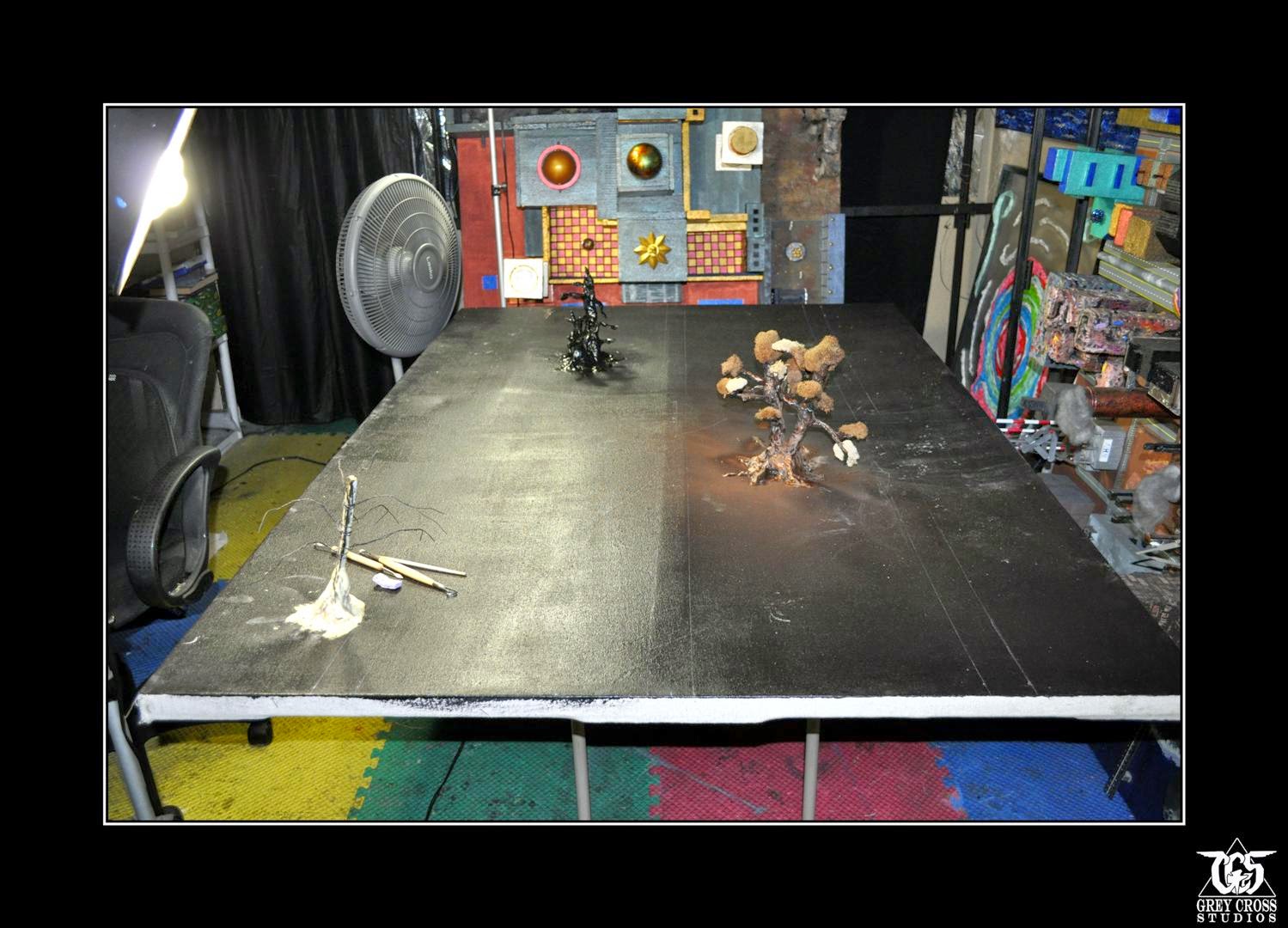 I am now 4 days into this piece and some new things have developed with it. In the center mausoleum there will be 4 crypts. Each of these crypts will hold a minute pinch of dirt from the graves of four of New Orleans dead and each of the crypts will be inscribed with their names, in memorial to them.

I've also begun buying several saints icons from the most important of the New Orleans voodoo shops. These icons will be added at various points to the sculpture.

I may also work to see that all the names used in the sculpture on the various crypts and hot boxes are authentic also (although I reserve the right to say that might be a bit too much work, but we'll see).

As of tonight on the sculpture, the three large trees are finished as well as the center mausoleum (minus the crypts) and the first of the icon (a Madonna statue).

Next up will be the additions of the 4 crypts and adhering the mausoleum to the canvas. Here are some photos taken in the past few days. 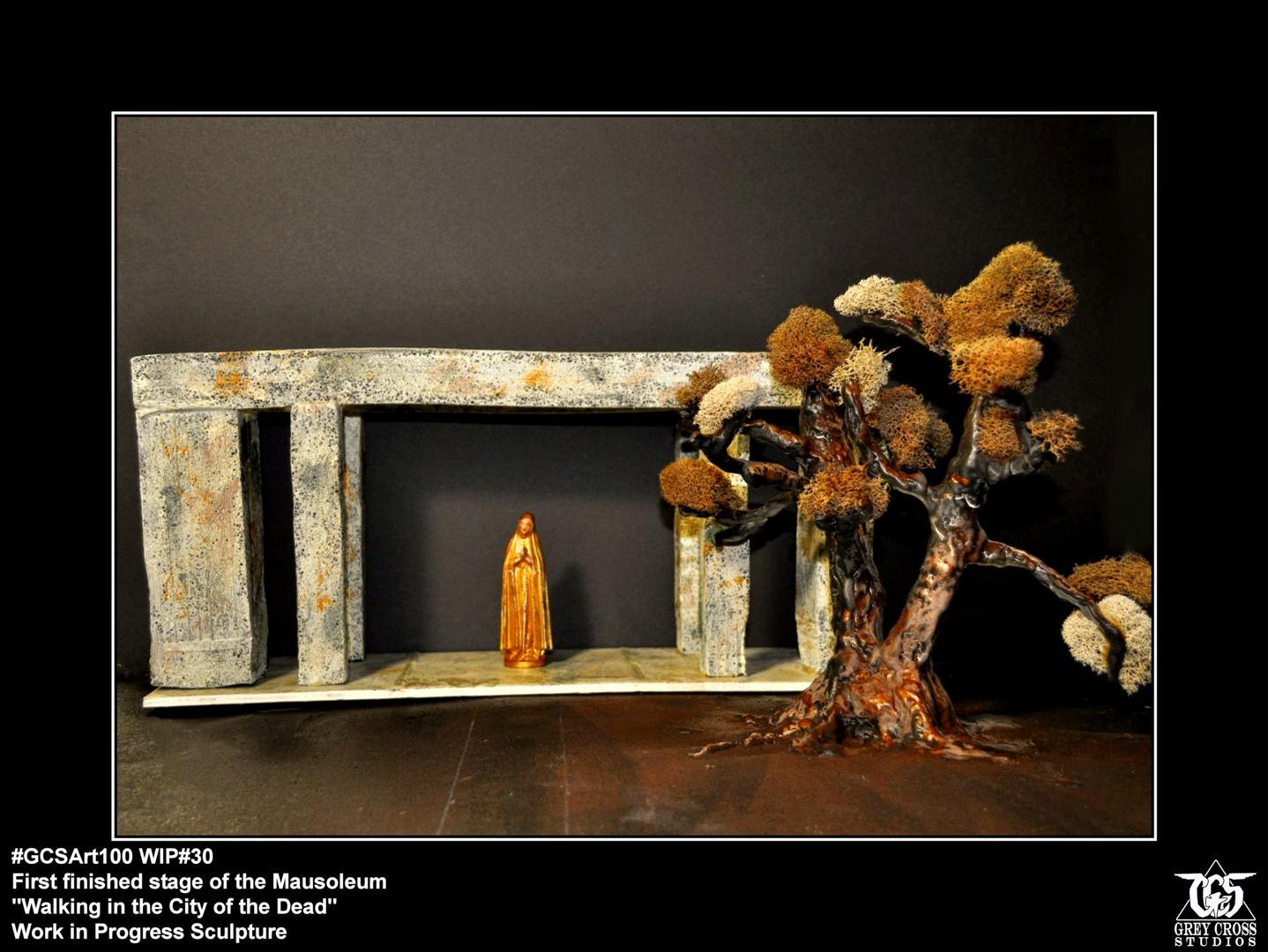 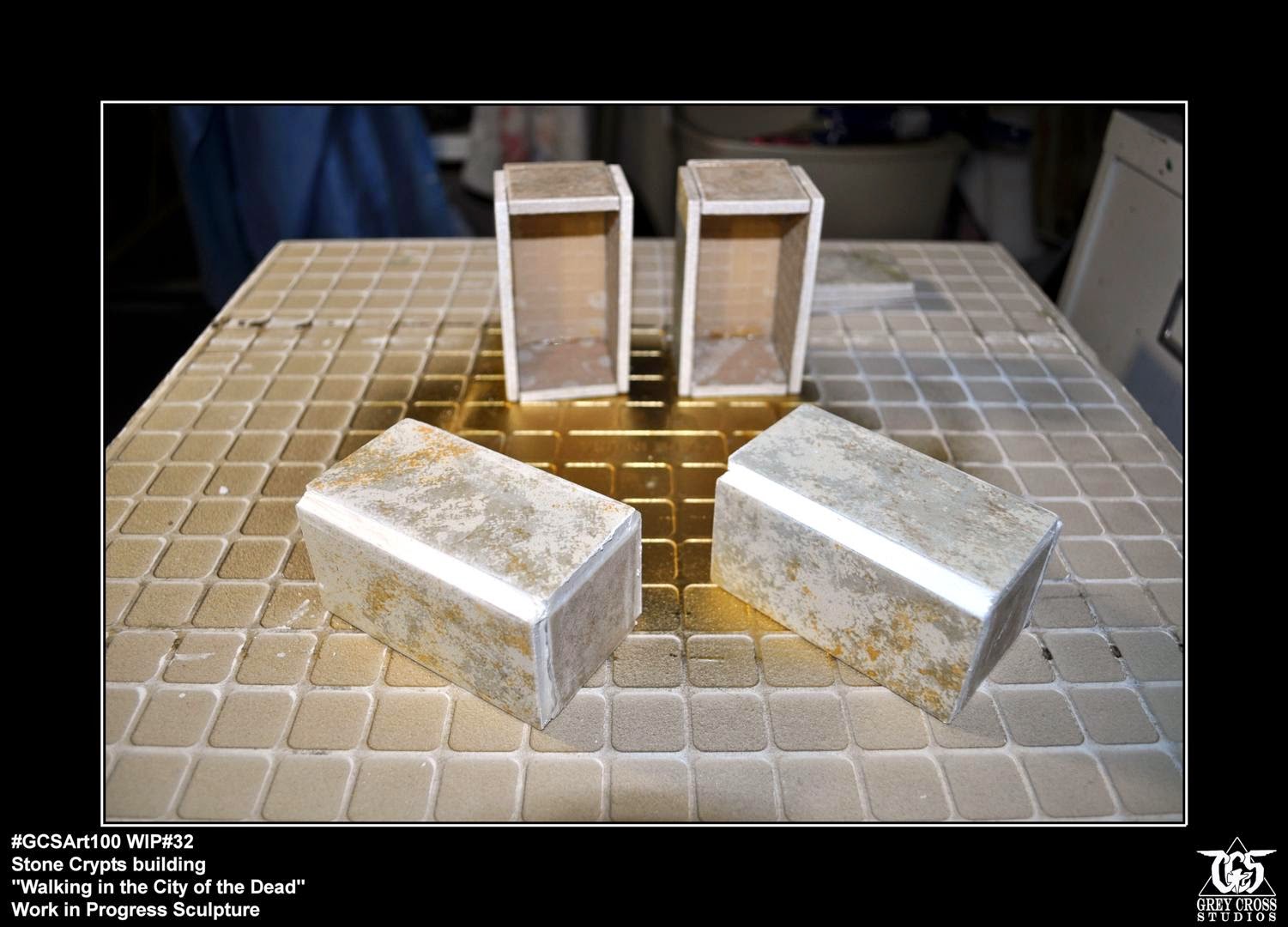 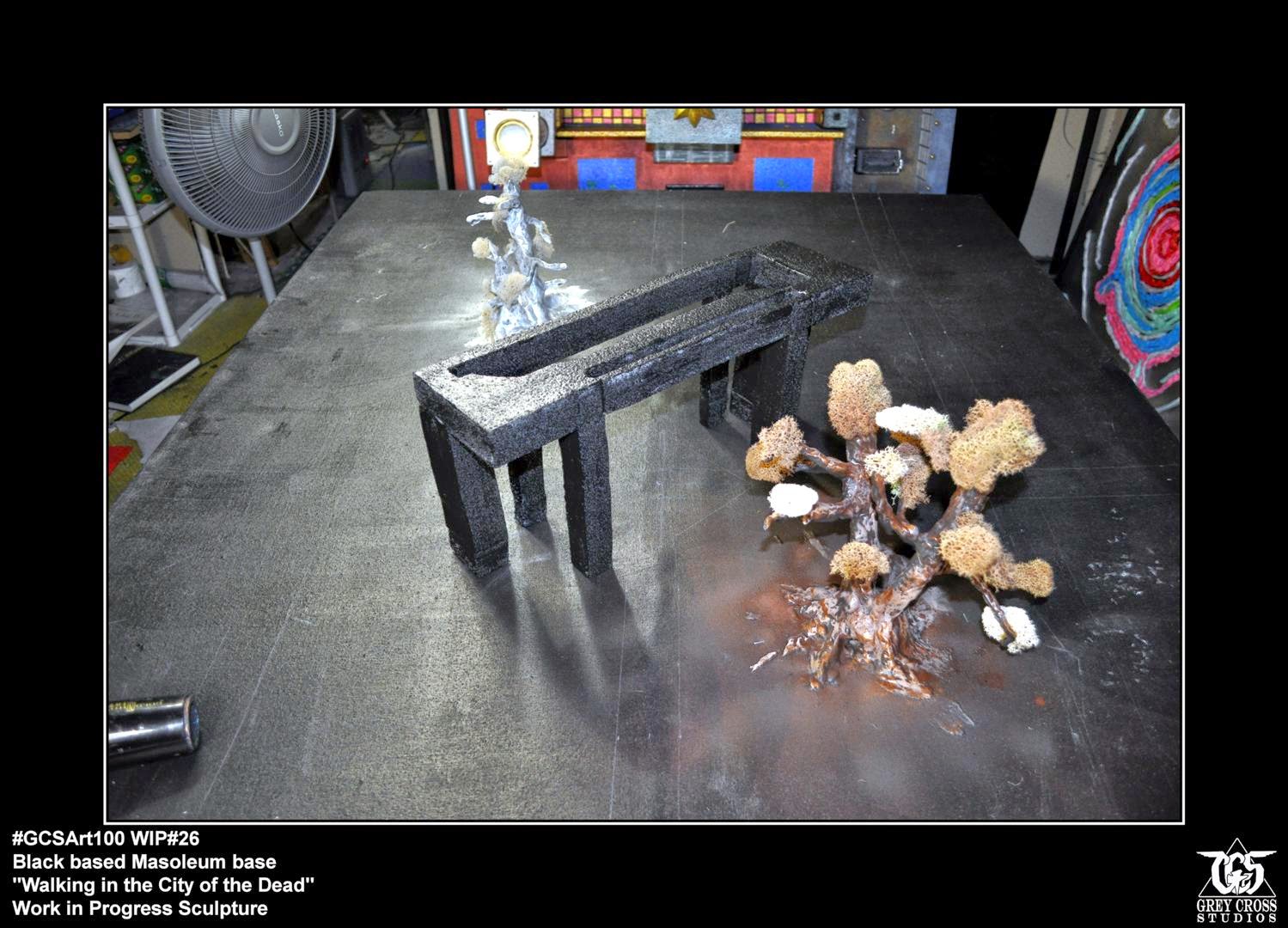 Time moves quickly when you are totally absorbed in creating. I've worked just about 30 hours in the past 2 days, literally with only a 2 hour sleep period to break it up. I've made a lot of progress in the past two days The first two tombs are built, and a moss covered memorial burial mound with marble column in the center. I also completed 13 individualized tombstones with iconography that will be scattered around the sculpture. I've begun the detail work for three connected wall tombs as well and should have them finished tomorrow.

Each small addition is a task in itself and can take anywhere from 5-25 hours to complete. But when completed every part of the whole sculpture is an individual work of art.

I am now 12 days into the creation of this piece and 90% of the canvas remains empty. There is a lot more work to go. For now some sleep is finally in order.

There are now 6 free standing crypts completed. Three rows of wall tombs. And one of two sepulcher mausoleums which will rest at the very top of the sculpture. The second of the hilltop memorials has also been completed as a memorial to Hurricane Katrina.

I've lost track of hours on this one. I am usually more disciplined about keeping a record of hours put have just been so caught up in the whole project that I let my discipline slip but I would guess I have to have about 60 hours of work in at this time and I am not yet at the halfway point of completion.

As a side note, I've decided to add a body sculpture to this set. In the coming weeks I will stop production on the sculpture itself in order to bring a model into the studio and create an airbrushed sculpture that is themed to match the Walking in the City of the Dead and then photograph them in one of the cemeteries itself. I will share more details as it comes closer to the actual date.

Here are some updated shots of the sculpture taken over the past week or so. The final photo speaks for itself. 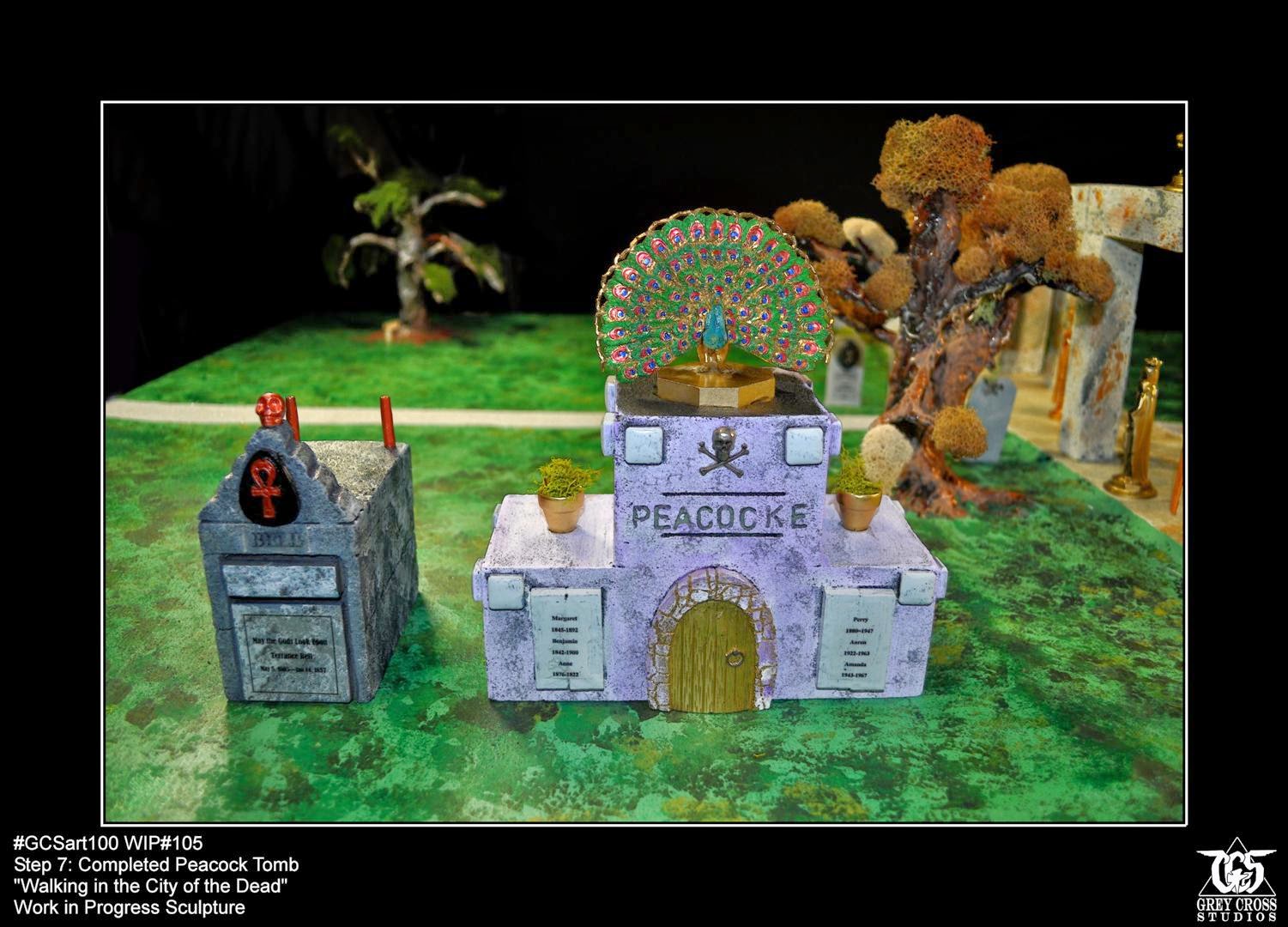 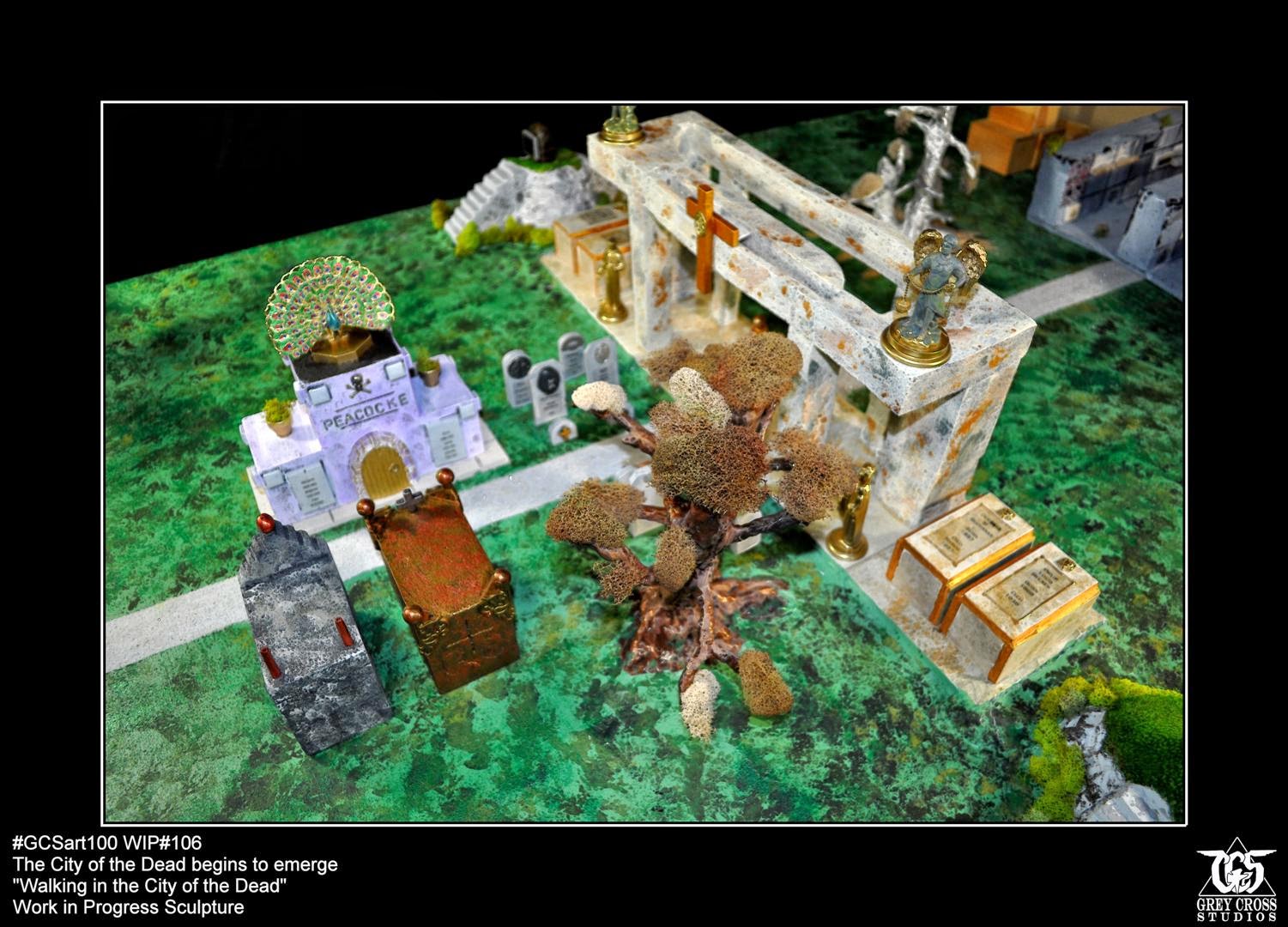 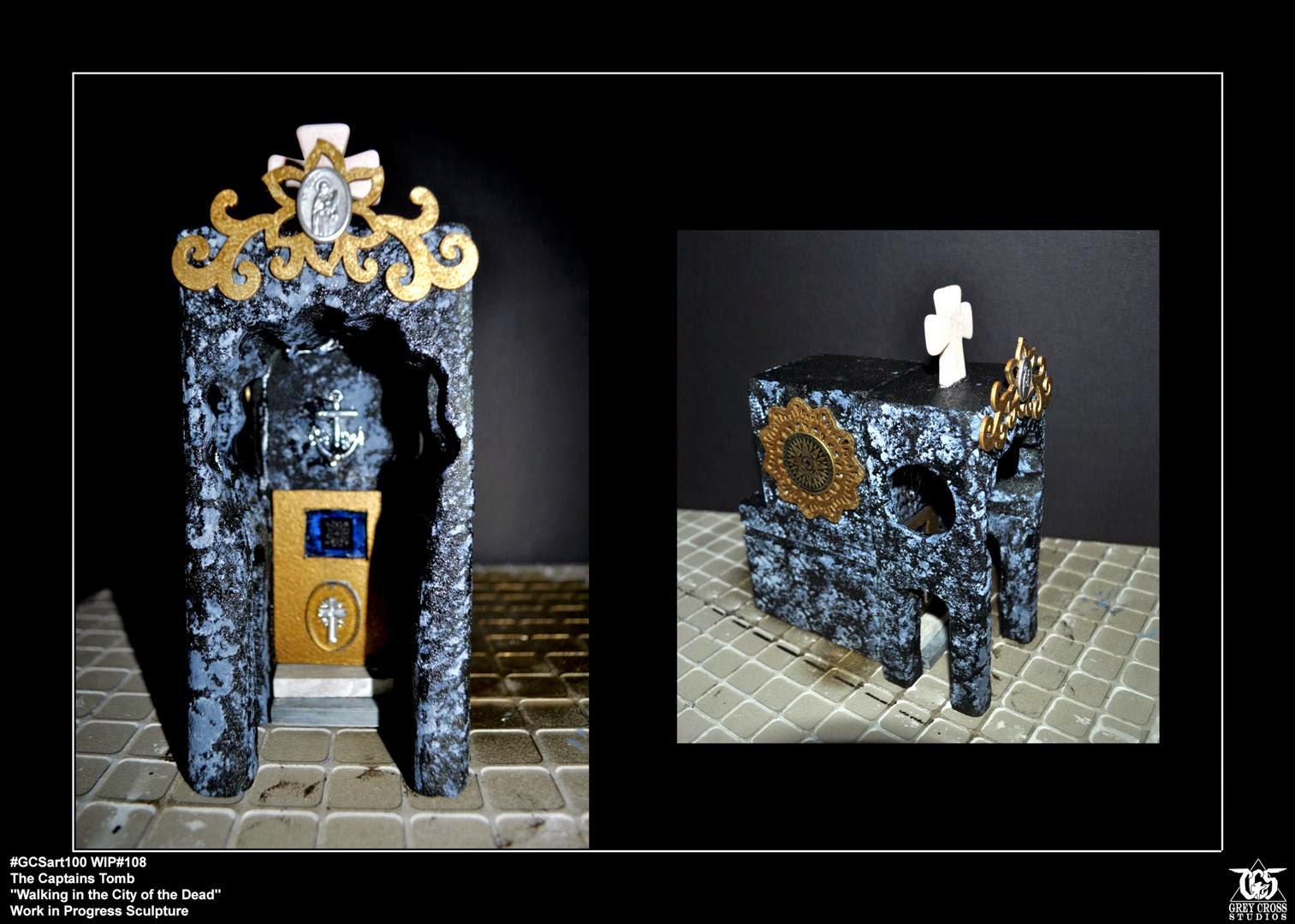 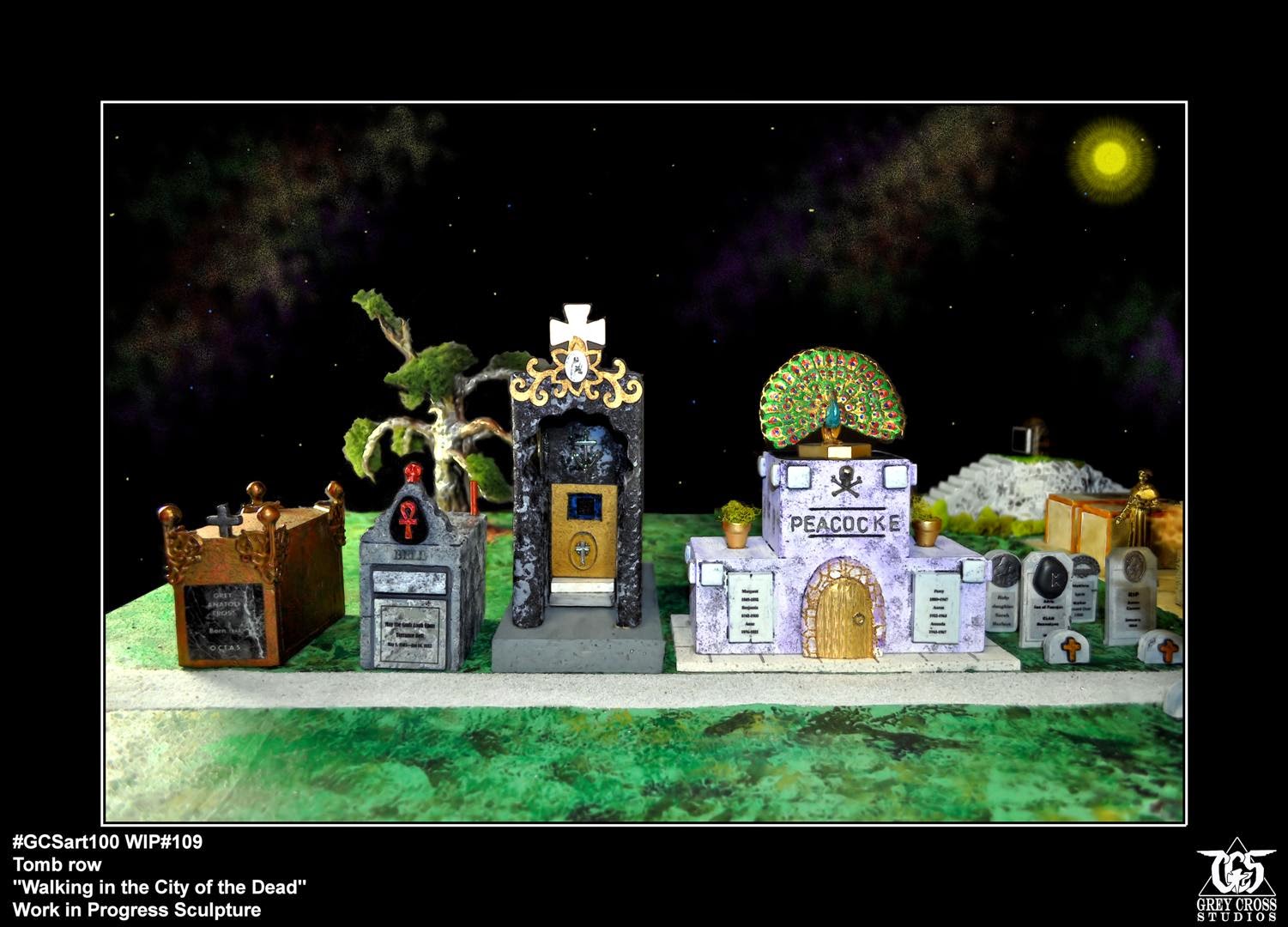 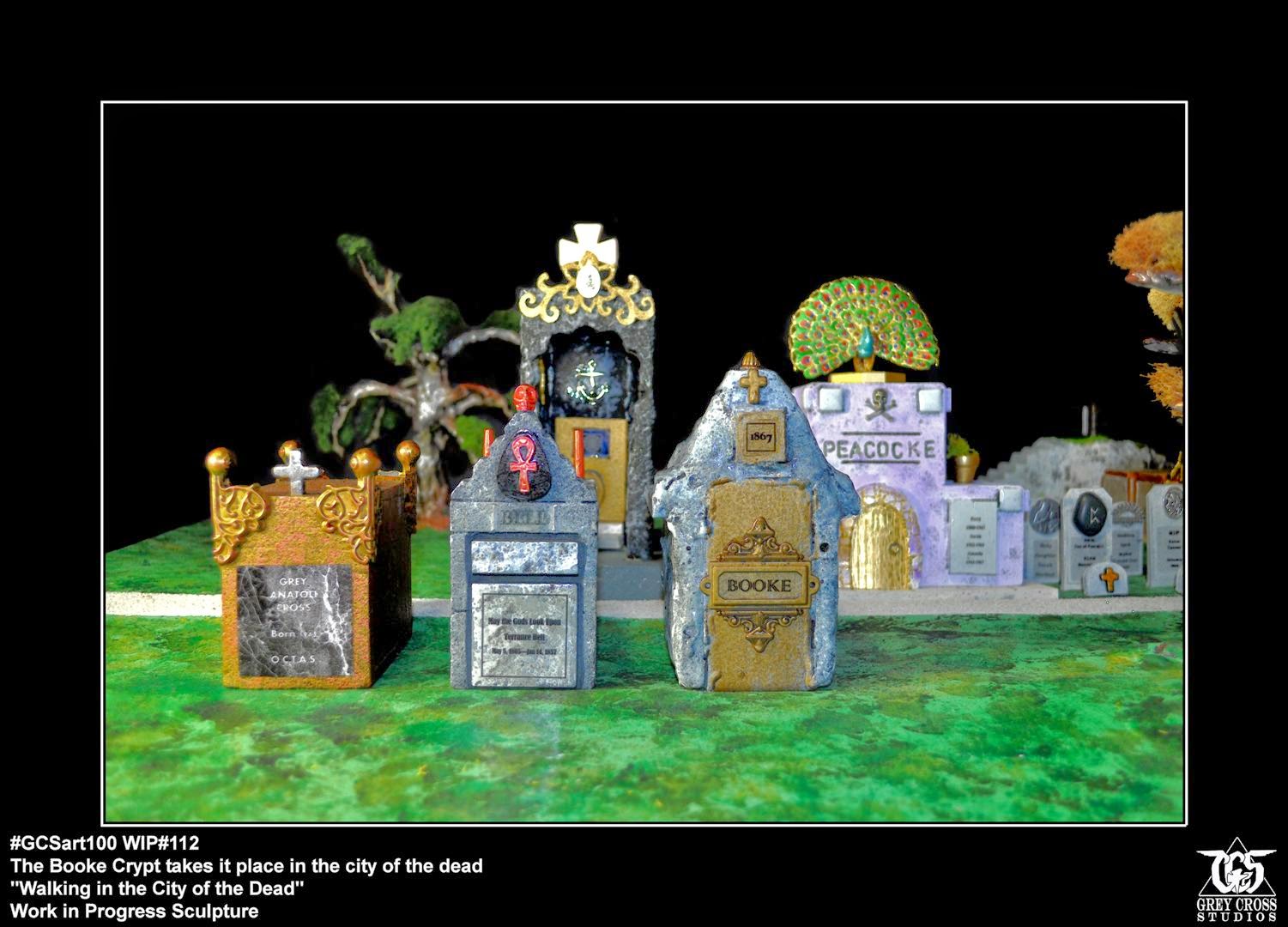 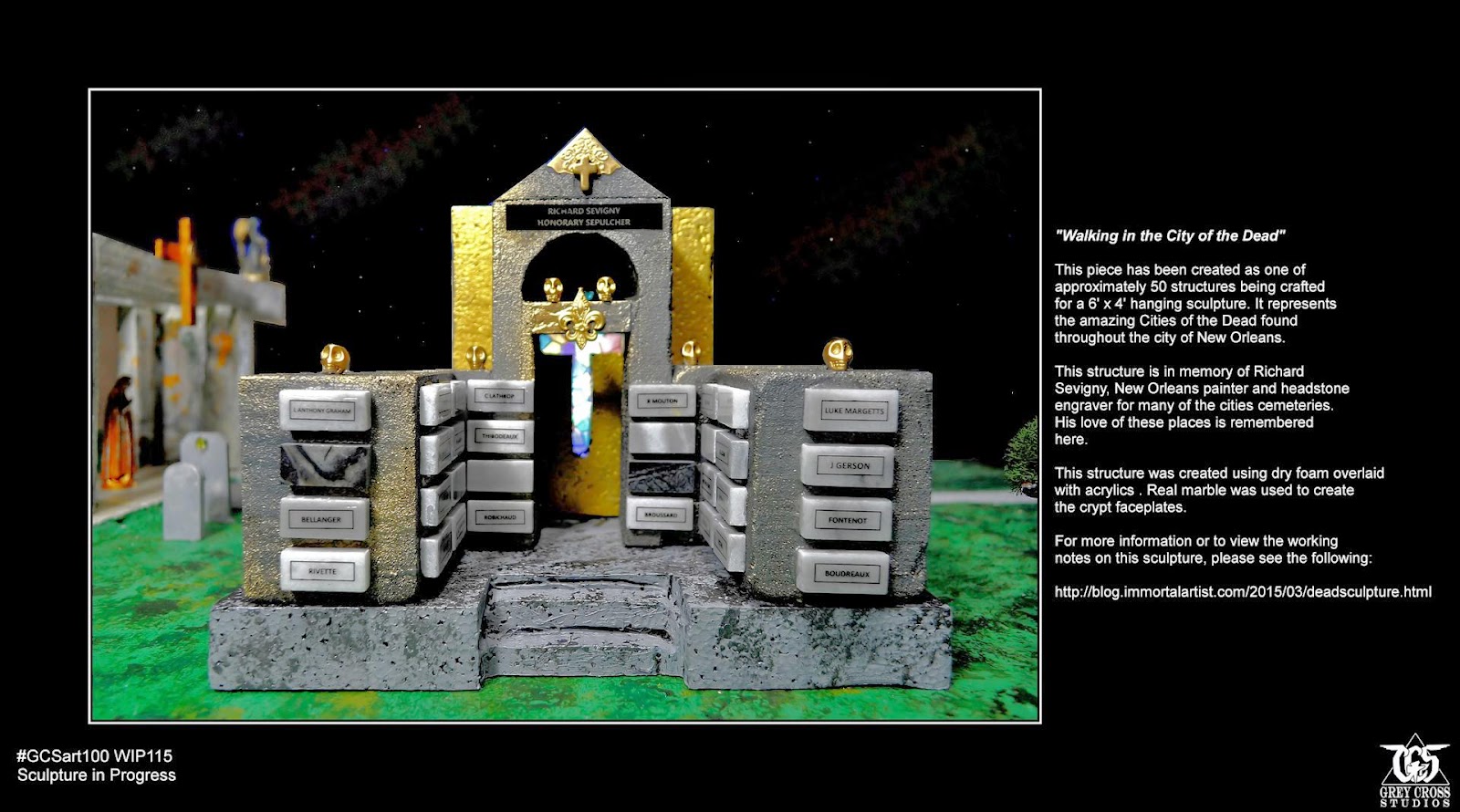 Well I took a week off from the big sculpture to focus on creating some miniature tombs for sale individually. I created three for the time being in different sizes. I'll show photos of them at the end of this update.

I am now back hard at work on the main sculpture and have completed several more crypts for it. This piece is really taking a lot of time. I'm focusing all my skills into each individual crypt and I am placing a huge amount of complexity and mystery into the whole piece. There are secrets at every turn and the whole piece will read more like a mystery novel I think. I've enjoyed placing so many things into this piece. Even though the piece is not political in nature, the activist in me can't help adding a few small
at 10:40 PM