Depression and the Artist 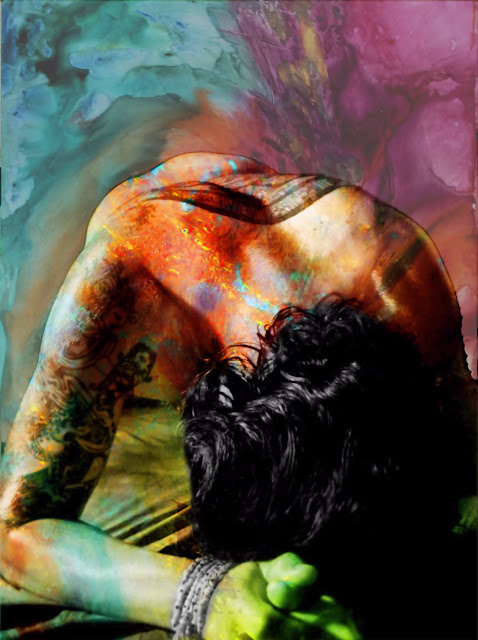 Severe depression can be a fierce battle between sanity and insanity. Its an experience that I would wish on no one.

I watched my mother struggle with it her whole life. It was so bad that not once but on several different occasions I was forced (after I was an adult of course) to have her temporarily committed so we could keep her from killing herself. It was a constant battle and one that for much of her life was controlled by badly prescribed drugs that made her situation worse. But even in more recent years when the drug quality was much better, getting her to stay on them was a battle.

She tried everything to control it. She fell back on religion more times than I can possibly count. She read self help books. She joined cults. But nothing worked. She was a very intelligent woman. She knew what was happening to her and often her guilt at her actions after recovery would just kick her back into it.

It wasn't until she was in her elder years that she found a solution. She rediscovered her creativity. She began making art. This little old Grandma Moses stereotype had found that while she was painting, the depression slipped away.

I'd always known that art had healing effects on both the mind and body, but until that time I'd never really seen it in action. She worked round the clock and while her health degraded quickly in those last years she painted until the last possible moment. And she gave it all away. It was never about profit for her. It was about healing her own mind.

I have used her as an example to people who have suffered with depression over and over again. And I began to keep my eyes open on how other artists managed their own illness. Even more importantly, I watched how I managed it in myself.

I am my mothers son and while I never had the severe mood swings and constant suicidal episodes which she faced, I still had my fair share of problems. In my previous creative incarnations as a writer and then professional photographer, I never quite found the cure to my depressive moods. It wasn't until I decided to abandon my career as a photographer and with no lick of skill at all, jumped fully into being an artist. And through that jump to the arts I found my own mental stability.

Don't get me wrong, the depression is still there. But I found that when depression set in, if I just forced myself physically kicking and screaming into the studio and worked, that the moods would ebb away. It wasn't easy. I'd spend the first hour positive that everything I was making was pure crap. Why was I even bothering with it? But if I ignored those self defeating messages and just created for the sake of creating, I would eventually find myself feeling pretty good again.

Now I want to preface this with a need to understand that some people due to their body chemistry absolutely NEED to also be on prescription medications. Art doesn't erase body chemistry. But it sure can help ease the passage between one depression and the next.

My partner is a good example of this. His depression needs the care of drugs also. But I can see the difference in him if I can get him into his work space. He immediately perks up and refocuses his moods on what he is doing.

We have a friend who takes several prescription drugs for severe depression, but periodically decides they are not going to take them anymore and plummets immediately into the abyss once off them. No amount of creativity is going to fix that.

I take daily medications for my HIV. I will be on them all my life. It would not be logical for me to suddenly say "I'm tired of these drugs. I'm done with them." Simply put, I'd die. Just because it is a drug for controlling depression, does NOT mean its any less vital to your life.

So what does this mean for the artist? It means that your art is more than just play time with the paints. For many of us there are vital consequences for discontinuing the work we do. I believe there are more depressive artists out there than we know. I often have artists tell me how they were so miserable in their previous work environments. They found a whole new world when they began creating. I also see a lot of people who deal with depression but never found the creative part of their spirits. They think its just a waste of time to make anything. Why bother?

But it is important and it can be the pivot that keeps us sane, productive and happy.

So like drugs, we sometimes have to create a routine around our creativity. With routine, we force ourselves into a schedule. Routines are easier to follow than random stops into the studio when we are feeling low. If you suffer from depression, then make yourself a routine. Don't focus so much on "what" you create. Make your focus on just doing it. Put aside issues of quality, originality or lack of skills. None of those things are important for this. Its the raw act of creation that is crucial and which changes moods.

A lot of people say "I can't create anything. I have no skills". With any other aspect of art I would say that skill is super important. Its not for this. You don't have to be a connoisseur of fine foods in order to eat. But you will die if you eat nothing at all. If nothing else, grab a tube of paint and stick your thumb in it and finger paint. I am sure there are studies done of the release of chemicals to the brain when we create, although I admit its not my area of expertise. But creativity IS my area of expertise. And I tell you as a depressive and an artist that creating can and will change your body chemistry. But only if you force yourself to try it.


Grey Cross is not a paid psychologist. He's just some dude that shares his life and artistic experiences and hopes you'll gain something from it.