Of Hurricanes, Dumb Cats and the Smell of Rotting Corpses

The act of devastating; destruction.

Today's been a bad day. Ironic as I blogged on depression just a few days ago. But taking my own advice I forced myself into the studio to work. Consciously I know I was peeved at the loss of my laptop to a cat who decided he had to drink from a glass by my bedside at 6am this morning. Now to my own credit, the glass was one of those mostly sealed affairs with a straw sticking out, a precaution against just such an event. But when my friend decided to try and drink, he made just enough noise to startle me, sending cat and cup sailing into the sky. both coming down with a wet thud upon previously mentioned laptop.

But unconsciously I think there are other factors at work. Now that it is warming up in New Orleans, locals are attempting to ignore the fact that with heat comes hurricanes and with this particular year comes the tenth anniversary of Katrina.

In preparation of this event I'd decided a few days ago to create several memorial sculptures commemorating the event. And I admit that ever since I made that decision that its been wearing heavily on me. Even while writing this blog I keep stopping and considering things between sentences. Happier to be playing with the studio kitten (no not the evil water spiller) and putting off thinking about this.

I've approached Katrina before as an artist. In fact there is a massive luminescent painting of her in my bedroom. I've exorcised this demon before because I think its healthy to push beyond that wall of dread. Here are a few examples. I'll continue this after the photos...

I think you see my point. I've approached this devil and actually come to peace with her. But with that said, this is a different situation. This is the anniversary of something that effected thousands. The remnants of her passage are still all around us. There are gutted and empty homes on many blocks. There are the signs made by the military spray painted on many houses to show if they had been searched and if any bodies had been retrieved. These signs have actually become status symbols in the city, still proudly displayed on some homes. There is even the faint reminiscent whiff of that fetid, putrid odor that was a combination of diesel fumes, corpses and rotting vegetation. Thankfully that is a lot rarer now, but for just a moment I can occasionally smell it on the air even ten years later. Maybe its just my artists imagination, but it sure seems real when it happens.

So as we approach this anniversary in a few months time, there are still more than a few demons yet to conquer. Art is how I deal with them. Everyone here deals with them in a different way. Ignoring thinking about it is also a big thing with many.

But I am a firm believer that Katrina has gone from being a horror to most and become part of the mythos of this beautiful city. Like everything else that has occurred here, we made her part of the city's legacy. That first photo is called "The Deification of Katrina" because that is what we have indeed done. We've turned her into a deity. She is as much a Goddess of this city as Athena was over ancient Rome. Both are awesome in their majesty and devastating in their wrath. To each we are mere mortals and nothing to them.

From a sociologists standpoint it is fascinating to see and I hope some are recording it for future understanding. That is if they can get the residents to even talk about it.

As an artist I am constantly aware of the interplay between emotions and art. I think the most powerful pieces are the ones that evoke emotion in the viewer, but are also painted with just as much emotion.

I suppose that is why I am going to push forward with these memorial sculptures because I know the emotion I place into them will make them powerful. And this anniversary is a catalyst to harness those emotions.

I once knew an artist who only painted when he'd gotten himself drunk and utterly devastated over the death of his only son who had passed years before. Most of the time the artist never even spoke of his son. But the pain was still resident deep down inside and he used it to create amazing paintings. He never spoke of his pain. There was never a need. Those who bought his work could sense it in every composition.

I am not sure I am suggesting to my fellow artists that they blitz themselves first in order to create great art, but there is a lesson to be learned here. If you paint without emotion, then your only making pictures. They may be good pictures, but the power that art can bring to the viewer is absent. They are destined to the dust bins of history and never reach the true potential that they might have become if the artist had brought his or her emotions to bare on them.

So don't fear your emotions. They are one of your most powerful artistic tools. And thankfully every single one of us is provided with endless opportunities to have our emotions twisted within us in either agony or joy. Use them! Make them count!

And having exorcised a few more demons by writing this blog entry, I can channel some of that emotion into making great art tonight

Well it took me a month since this original post to really find my footing on the Katrina Anniversary pieces. The project has expanded a bit to included some special prints created for anniversary as well as the sculptures. Part of the delay was a lack of an overall concept for the various pieces. So I can't blame it all on hesitation to begin. But that played into it to be sure. But once the conceptual brainstorming had achieved results I jumped into it fully.

The concept behind the prints will be using photos I've taken in my New Orleans series and adding a hurricane shape partially consuming parts of the city. You can see an example here: 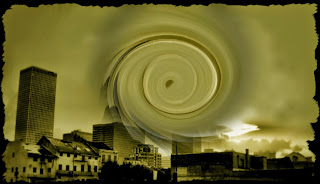 The series entitled "Postcards from the Edge" will have approximately 10-20 individual prints. They will only be available until August 29th the anniversary of landfall in New Orleans. At that time they will go on moratorium. I may bring them back in 5 or 10 years or I may leave them on permanent moratorium. I've not decided yet.

The sculptures will be described later as I am still working on the prototype. But you can see a starter example here: 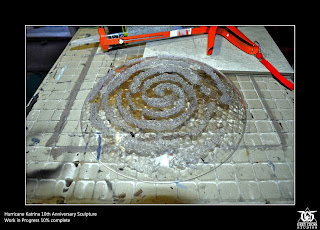 But at least I've got a start on them now. As the project proceeds I will update here.