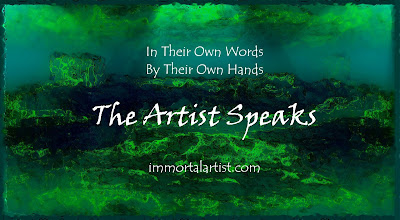 Immortal Artist seeks to give a venue for creatives to discuss and show specific pieces of their work. We want to give you a forum to talk about the history and development of specific pieces of art. If you would like more information please check out the following link.

Most of my work is abstract.  It is not overtly political.  It does not seem to directly confront a deeply misogynist culture. I’ve done overtly political art in the past, but was never entirely satisfied with it.  It felt preachy and one-dimensional. Abstraction gives me a freedom that no other style of painting can offer.  But most of the reason I make abstract art is because so much of the realistic art out there is about stripping women naked for male entertainment; it’s been the case at least from the time of ancient Greece and has not abated today.  If anything, it’s intensified due to the influence of porn.  Men feel entitled to complete access to women’s bodies, whether that access is visual or physical.  That’s not fair, just or healthy for women.


I don’t paint young, naked, stereotypically attractive women.  I'm not offended by bodies, but I am offended by the way women are routinely sexualized and humiliated in this culture, and I won't participate in offering up their bodies to the male gaze.  What I do to the male gaze is starve it to death. To be a woman artist in a world where women are still, despite all assertions of equality, considered less than their male counterparts is a revolutionary act in itself.   To refuse to cater to the tastes of the dominant class is a revolutionary act.

You can view this and other works by the artist at: http://mkhajdin.com/

You can reach M.K. through the following: