Tradition can be good. It can show us our roots, guide us in decisions for the future and remind us of those that went before us.

But tradition (despite what many claim) can also be a bad thing. If we rely too much on the past then we never create anything new.

Let me give you an example. Here in New Orleans we have Mardi Gras. This is no simple thing. It lasts weeks and envelopes the whole city in the carnival tradition. Parts are simply amazing and they have their roots going back years.

In the 1950's the tradition of the gay carnival krewes began. These were autonomous groups that really didn't have a place in the mainstream of Carnival tradition. They broke with that tradition and formed their own groups. Since then the gay krewes have held their own events culminating each year in gala Balls.

This was where tradition did not serve a purpose and someone thought, "lets break with tradition and do something new". It worked. For 50 years the gay carnival groups have created their own traditions. Today there are multiple gay krewes in the New Orleans area.

But tradition is now killing these groups. They have become moribund, relying on the old traditions they themselves created to the point where year after year a half dozen of these groups do the same exact thing over and over again. There is little to no change in their traditions. Their turnout for their Balls and fundraising events throughout the year is growing less and less to the point where the oldest of these groups the Petronius Krewe was not even able to put on their Ball this past season. Tradition is killing these amazing groups and no one seems to be doing anything to stop it.

I use this as my example because it shows how "tradition" can work both in the favor of and against the goals of persons involved.

We get so caught up in tradition that we forget there are other ways to do things.

Artists are particularly susceptible to this. Once we find our niche we become stagnant, always relying on what worked for us as an artist in the past. Our skill levels become moribund  and with it our imaginations. We stop thinking new thoughts and our art reflects it. Even worse are the artists that see the success another artist has with technique and mimics it in their own work because well it makes us money.

Here in New Orleans we have an amazing artist named James Michaelopoulos. His work most known to the public are of surrealistic French Quarter buildings painted in gaudy beautiful colors. The buildings are canted at an angle in a distinctively Michaelopoulos way. 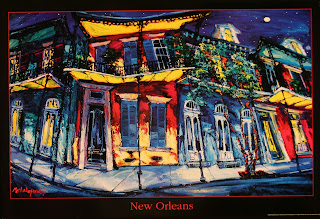 I know James and I've had the pleasure to visit his massive warehouse sized studio on many occasions and I was always taken by the fact that this man who is known for these canted buildings was not stuck in his own tradition. His studio is a plethora of sculptures and projects and even has a stage set up so others can create performance art in the space.

Yet, if you take a stroll in the French Quarter along Royal Street you will see at least a dozen copycat artists, trying to make the same exact art that James makes. "WOW that makes money! Lets copy his style and make some too!" These artists are lost in another artists tradition and have lost the point of creating their own distinct style of work. And while I know none of these artists personally I must honestly say I have nothing but contempt for them. They are stagnant and have lost the true path towards greatness on their own.

While it is OK for an artist to find his/her own style such as Michaelopoulos did, it is not OK to allow yourself to rely totally on that style. For every new skill you acquire, it can only strengthen your original style. Look at any great master and you will see that they never ever let their work stagnate. They were always questing out for something new, some new mountain they could conquer with their art, and it was this that gave them the right to be called a "Master".

Its difficult sometimes to see the true masterpiece we create through the individual brushstrokes we paint, but it is far more satisfying to step back and marvel that we created something new rather than stepping back and saying, its just like all the others we've created.