This has been a rough studio day. In the first five minutes I knew it was going to be a long one as my poor computer began its mad descent towards destruction. After 10 crashes and several attempts at diagnosing what was happening I made a desperate attempt to keep it in safe mode at least long enough to back up any files not backed up in the last mass backup a few weeks back.

After 5 hours of tedious backing up of one small file at a time, I finally managed to get a clean set of files. That of course was when the computer began to stabilize and stop crashing.

But its only a matter of time. This poor computer child has been rung over the coals in the years I've had her and I suspect there is probably a build up of years worth of black spray paint within her rusty guts.

The trauma is that once she goes I'll lose at least half of my digital art abilities until I can manage to get a replacement, which won't be anytime soon. As a starving artist, these kinds of things can be devastating when they occur. But we move on and cope.

As compensation I spent the evening in the soul pursuit of creating several new pieces of digital art. My heart just wasn't in working with the sculptures tonight and the digital work settled me a bit. Here are the results. Would love feedback on them. 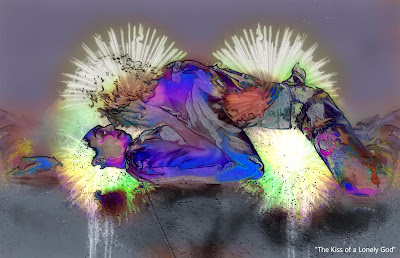 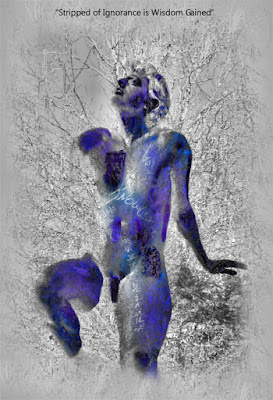 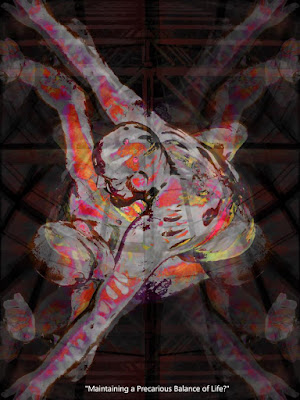 Amongst the decaying computer I also managed to conduct several model interviews for the body sculpting art and worked with Art Intern Bo for several hours teaching him how to carve on laminate. He took to it well and I'm going to have him start his own project on a larger piece next session.

I also managed to get the second panel attached to the new tomb sculpture. Here it is carved but not yet attached. 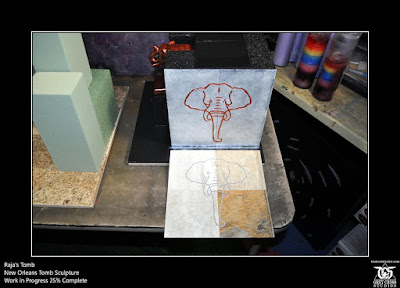 Only a few more days until my 50th birthday. I may take a little time off on Saturday. Billy has promised me that we can go shopping in the junk stores for the afternoon in search of interesting cast off items for use in the studio. I love using found objects for art. It also looks like the big art supply order that came from the grant from Visual AIDS is coming that day also. So that should make things a bit brighter!

In last news I believe I am going to restart the experimental art challenge that I attempted a year or so back. If anyone is interested in participating once I get it going, let me know and I'll see you get information. Here is the graphic I'll be using for it, so watch for it on the various social networks. 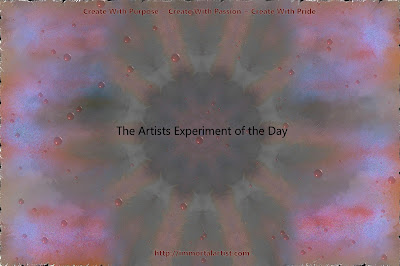 I'll be outlining more about this program in upcoming posts also.

I think that tackles it for tonight. To the hard working artists out there that read this blog. Thank you. I hope these daily insights have value. Its hard to tell sometimes but I know your out there reading.