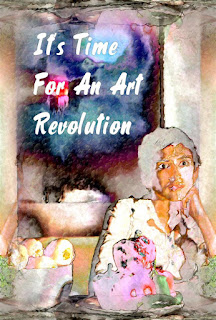 As Burning Man came to an end it had been my irritation to see dozens of articles written on everything from bug infestations to earthquake hazards that could take place with so many people dancing in the desert. In one case there was a report about a van that was driving to Black Rock City that said "Free Candy" on the side in bloody letters. The owners were participating in the crazy vehicles that are known to populate Burning Man, but stopped briefly in a California town on the way to visit friends. The outrage of frightened parents who took this "obvious parody" as real and called the police to protect their children was to say the least, IDIOTIC! The press coverage it got was even more so. In another case there was a series of articles written about the hazards to the ecosystem with so much smoke in the air.
Over and over again Burning Man got tons of coverage but so very little of it had anything to do with the amazing art that was created for it.

The simple fact is that Burning Man allows for a forum for art that has very little value to our society. We laugh and call them desert hippies and tech nerds out of Silicon Valley, but we take little notice in the soaring majesty of sculptures and art installations that for one brief week make their presence felt far away from the epicenter of human populations.

This saddens me beyond belief.

This is not exclusive to Burning Man though. This week began the 14th Annual Istanbul Biennial. The city of Istanbul, Turkey becomes the venue for some pretty amazing art. At the same time also in Istanbul opening one day after the Biennial is ArtInternational 2015, a separate art event that spans 88 and more galleries in the city.

But instead of talking about the fact that this ancient city is the host of two major art forums, the news has been nothing but the controversy of the two competing against each other. Few articles again mention the amazing art of either event, but focused on the petty rivalries and the politics of art.

These aren't the only cases. It seems like the emphasis now is completely gone from the art that should be getting all the attention and seeks only to talk about the controversies of the art world.

Sadly when art does get mentioned its in the form of short annotated articles that list an address and a date for a venue but rarely talk about the art itself, or its inspirations or its creation. In fact I find that even the articles that do talk about an artist MAY insert one poorly shot photo of the work, but more likely no photo at all. Just text.

Why is it so hard to find something worthy to discuss with all these amazing artists around? Sometimes I think its just the laziness of the interviewer who does not have the skills or the desire to talk to artists properly or cover artistic events with zeal. Instead its mostly lackadaisical coverage peppered with cliches.

But some of us would like to know more. I can't be in Istanbul nor can most of the world. But that does not mean that we cannot enjoy the art that is being produced there. Only 70,000 could attend Burning Man this year but you know it didn't stop me last night from watching the Man burn on a live internet video feed. My heart wished I could be there, but I sought out a way to experience it still.

But it should not be so hard. We have hundreds of sports channels on cable and online that cover every aspect of the sporting world right down to color jock strap that Joe Player was wearing for the big game. Why don't we have that kind of coverage for art?  Well maybe not the jock strap coverage, but lets see more coverage for the international arts scene. Why can't we make art exciting?

But we the artists are also to blame. This won't change unless we make it change. Let me give you a simple personal example. I have been running a program called The Artists Speaks for almost a year now. This was created to give an artist to have a voice to some of their best work. I'd provide a platform here on this site for an artist to specifically talk about their motivations and reasons for creating a specific piece of art.

Now my forum here on Immortal Artist is not huge. I get about a thousand readers a day. But its still a place to allow an artist to promote their work in a unique way. You would think I'd have a regular stream of artists interested in a little added promotion of their work. But to date I have perhaps 15 total artists promotions on this site. And most of those came from artists that I pretty much begged to participate.

I'm not trying to complain that no one participates or promote my own program but it is another example of the apathy that seems to be present in the artists who work so hard to create. Its almost like we are afraid to say "take notice of me". But you know, there are some amazingly talented artists out there that deserve to be noticed. And they won't be if we don't force the issue ourselves.

Do I have a solution to the problem of the press? Not yet, but I do know that if this does not change, then a lot of great art will vanish into obscurity. And that would be a very sad thing indeed.