Will My Art Outlast Me? The Artist Considers the Life of Their Art 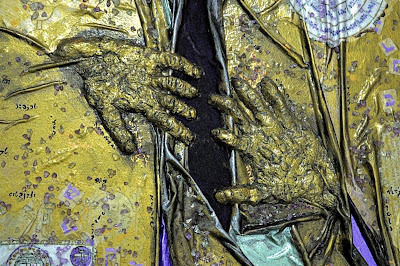 When you are painting that woodland scene in your studio on a quiet night you are inevitably focusing on whats in front of you. You are focusing on each brush stroke. You are considering the blends of each paint color and do they naturally flow together to form the painting you are trying to create.

But how often do we take the time to consider the longevity of that piece of art? Will it last five years? Fifty Years? Five hundred years? Does it even really matter?
Recently I read an article about Jackson Pollock the world famous abstract artist. The high points of his career were in the 1930 and 40's. Jackson was known for these huge (really huge) paintings composed of paint drips. To us now it probably doesn't seem as amazing because we see dozens of artists mimicking his style all the time. But in the context of his times in the 30's, this was some truly revolutionary stuff.

I am not even sure if Pollock realized he was on the cutting edge of something new. I suppose over time he realized it, but at first it was just a painting style that he developed and loved. He gave no thought to the longevity of his work but merely to the beauty of the piece before him.

Now those pieces sell for millions. In fact one of his paintings sold in 2006 for $140 million. If you spent $140 million for something, you'd expect to last right?

Well here is the clincher. Pollock had a fondness for latex paint. The rise of latex sort of corresponded to the times of Pollock's own rise. He loved the stuff and used it prolifically in his work. The science of latex was still emerging at that time. House paint, for all the houses that it adorns still has to be replaced from time to time. It fades. After 25 years a house painted in latex begins to lose its color. And after 40 or 50 years, so are many of Jackson Pollock's greatest works.

He was cutting edge in his use of latex, but no one including him could foresee that it may have been a great blunder to ever use it in the first place. The only ones benefiting are the restorers who are called to try and bring his works back to life.

Did Pollock think for a moment on those long nights in his studio as he meticulously blended his drips of paint together, will my work outlast me? Who knows for sure.

The point is that every one of us as artists should from time to time take a moment to consider the longevity our work. There are some forms of art where it is not a major requirement of what you do. Acrylic based paints and oils have long been proven to last for a very long time. Science has done the thinking for us. But other forms of art such as sculpture, experimental art, wood carving and art that uses reclaimed materials, make the consideration of longevity an important matter. But even for those art forms where its not a major consideration, artists should still take the time to consider their work past the time its sold to a buyer. Taking time to think about where our art is going is healthy. It gives us perspectives that stretch past the easel and makes us look at our own mortality.

I've been doing that a lot lately. One of my works in progress right now is called the Time Sculpture. It is composed of 25 small tile cubes arranged in tiers of five cubes each. Within each cube is a mini time capsule that contains information about 25 current artists whose work represents our times and ways of life. Every artist is writing a small bio about who they are and including a flash drive which some of their work has been placed. When all is done, each of the 25 capsules will be sealed and an etched date stone placed upon it for when that specific cube should be opened back up.

So you can see why my mind is constantly thinking lately about the immortality of our work but also about the best ways to create the Time Sculpture so that its contents have the best chance of surviving for several hundred years intact.

It is forcing me to really look at my own work and how to make sure it outlasts me.

It is a simple fact that artists in their early days are the least likely to consider these matters. When we are first starting out we are thinking about learning our trade. We pay little heed to where it might go. But it is also a fact that an artist who later in life becomes well known will end up with their earliest works being sometimes the most sought after. Can you imagine chancing upon an early work by Pollock? Something he did when he was first starting out and had been stuck in some attic of his great aunt Tizzy's for 100 years? What are the chances its not decayed and falling apart by now?

So either if you are just starting out as an artist or your well seasoned, give some time and consideration to life span of your work. It may just give you new perspective as to who you are and what you wish to accomplish with your artistic career. It could bring your work to a whole new evolution.