Explorations Into the Art of the Graphic Novel

Until recently, graphic novels as an art form really held little interest for me. Part of this was from lack of education on my part. I'd only seen graphic novels that seemed like nothing more than cluttered comic books.

I felt like I was not giving the art form a chance and added it to my news service so that I would receive a regular flow of information about this genre of art.

The first thing that really caught my attention was a graphic novel about the life of Gandhi. This really attracted me because I had not considered that graphic novels could be used for historical context. I know, I should have considered that, but as I said, I'd not taken any interest up to this point.

The next thing that caught my eye was a graphic novel illustrating heart disease and written for people without any prior knowledge of the disease. Again my interest was peaked.

My partner has many graphic novels at home and I began to delve into a few of them including Neil Gaimans sandman series which is one of the most highly rated graphic novel series in the history of the genre. I had tried to read these before but in all honesty I was a bit biased because I found my old eyes had a hard time reading the text.

Now I am looking at them from a different perspective. I am not as concerned with the individual story line of a particular book but the format of them and the context for what they represent and how they can become an art form with multiple uses.

I think the name "graphic novel" became synonymous with children's cartoons, manga, anime and a host of other youth centered art forms. Again I admit I have been biased in this because that was the impression I'd always gotten.

So I am beginning to respect this art form more and more as I look at it closer. I am not sure I will ever be as fanatical as some are, but I can have a healthy respect for it and even a desire to incorporate it into my own work.

As an assimilation artist, I am almost obligated to stop being biased towards various forms of art and find ways to assimilate them into the collective (yeah a Star Trek Bog reference. Live with it!). But its true, how can graphic novels be brought in and morphed into something new and something living cooperatively among the various works I create?

So I began a little experimentation. The one thing I am sure of at this stage in my career is that I do not have the time or patience to put into creating a graphic novel. To draw every frame might well be beyond my abilities. But, what I do have are the basic elements for such a thing in the form of stories and photographic materials that could be used. So the question is, can those be morphed into something resembling a graphic novel?

I started with the most recent sculpture in the Revenant Series. A piece called "Oberon's Fortress". For those that follow the Revenant Series, they know that I am weaving an intricate and surreal set of art around the story of lost spirits. In fact, Oberon's Fortress itself is a morphed piece of art, originally taken from a totally unrelated series of art revolving around driftwood sculptures and placed into the Revenant series. Here it is in its finished form.

Its not a small piece. It stands 34 inches high. It represents the domain of the faerie king Oberon and it has its own story that merges with the Revenant universe.

So the question was, can this sculpture be morphed to fit within the framework of a graphic novel? Here is the result. 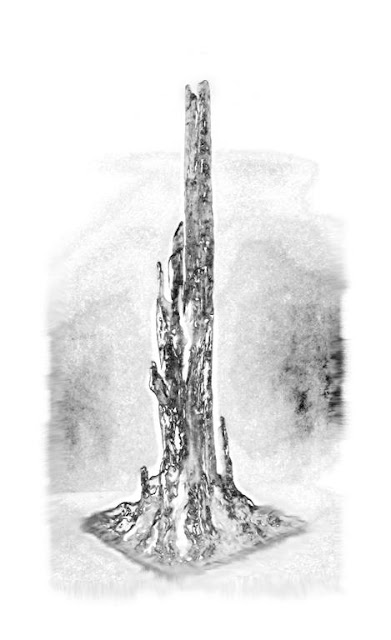 Once faced with this version of the sculpture, rendered into a black & white graphic format, the whole task suddenly no longer seemed impossible.

So I took this and added a bit of the annotated text about the piece to see what it looked like. 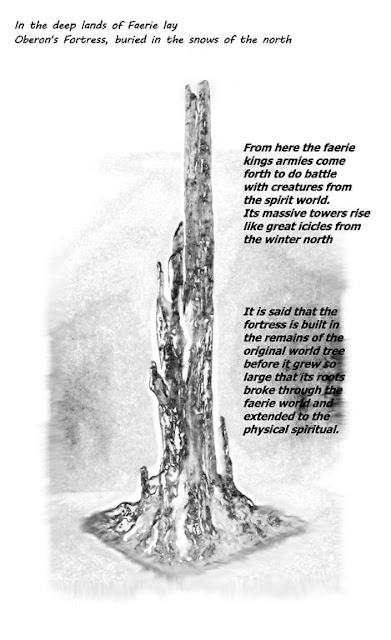 The formatting will need some work and an overall look would have to be created, but the potential does truly exist to morph the revenant series into a graphic interface.

So the idea works with a static piece of art such as a sculpture. Does it work with body paintings? This took a bit more doing to create a strong enough image, but I think I can say, it works. 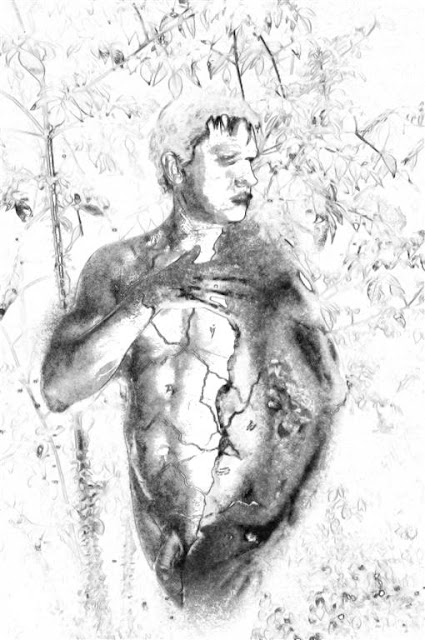 So there is potential here. Even if I do nothing with it, its an enjoyable experiment into an area of art that I am completely unversed in. If it becomes nothing more, so be it.

What is crucial is that it is one more example of assimilation art and the morphing from one art form to another. Revenant now caries within its series, sculptures, body painting, photography, digital art, written art, and cel art. Adding Graphic novel arts to this list is not so difficult to achieve.

Some may argue that the art within a graphic novel is hand drawn, so this doesn't qualify. But I argue that when you consider that all the work is indeed hand made and in some cases such as the body painting, most definitely hand drawn, that it qualifies in a totally new way to be considered part of this art form as well.

I will eventually add a works in progress page to the website, but for now this is my introduction into this new phase of assimilation work.

As for the art form of graphic novels, I will put aside my original judgement and deem it a worthwhile (if not yet quite appreciated by the world) artform.