Hymn of the Rainbow Cathedral - Artist Experiments With Depth

I am not sure I am naming this experiment properly. But with many of the experimental art pieces I create, I am often forced to create new terminology to accompany the experiment. So let me give you some context for where I am going on this.

One of my earlier experimental works was with wax which was applied using a soldering iron and then spread with a hair dryer to create intense color variations. I first used this technique on flat surfaces and eventually adapted it to sculptural work.

Now we come to the current experimental piece. My intention is to take the wax work concept and couple it with the dimensional aspects of the overpainting piece. Using a piece of driftwood, I am going to use wax to cover the driftwood in gradual layers. multicolor wax first, polyurethane second, then repeat the process over and over again to create a "depth" to the sculpture. If the piece works the way I hope it does, over time it will begin to look like the color sinks back into the driftwood rather than resting just on the surface. Its an illusion of the eye primarily.

I have to be honest that this one may fail utterly. Until I get working on it I can't really be sure what the end result will be.

As all my experimental tutorials go, from this point on I will show and discuss the process photo by photo in hopes that it will assist other artists and teach something new. So please follow along. This experiment will take approximately a week to complete and I will update at each step in the process. So check back often.

I chose this piece of wood because I felt it already had a natural depth to it in the curvature of the wood. Plus I'd already prepped the wood last week using a black appliance epoxy to seal the wood against breakage. Its a heavy piece. It is 19" x 9" x 6". But its solid and should serve well for this purpose. 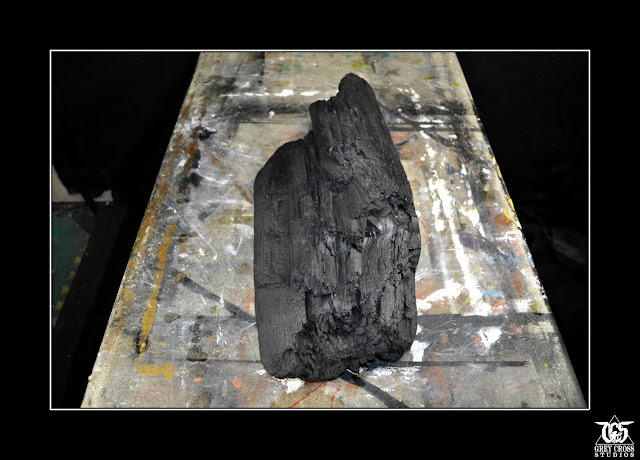 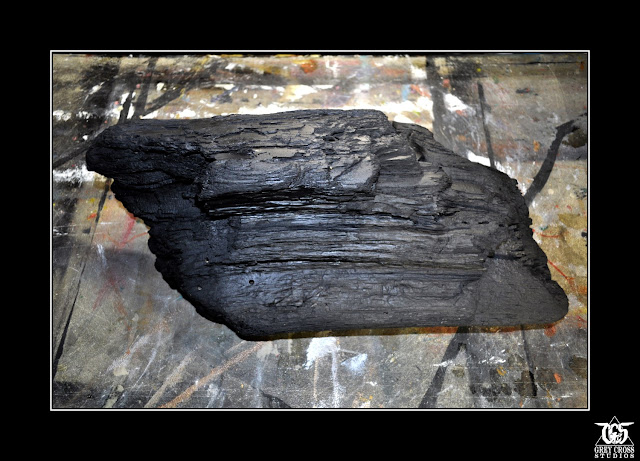 The most important step is mounting the wood on a tile base. This gives the piece stability and a working platform. This piece of wood is an odd shape. So after mounting it in natural clay, I've added two more smaller pieces to give the piece a better symmetry. I've locked them to each other to create one cohesive piece. You can see in the images the process of claying in each component and then the final image of the piece completely black based and solid on its base. 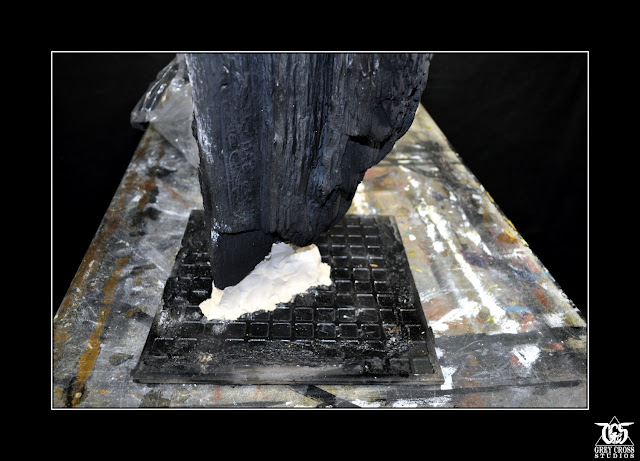 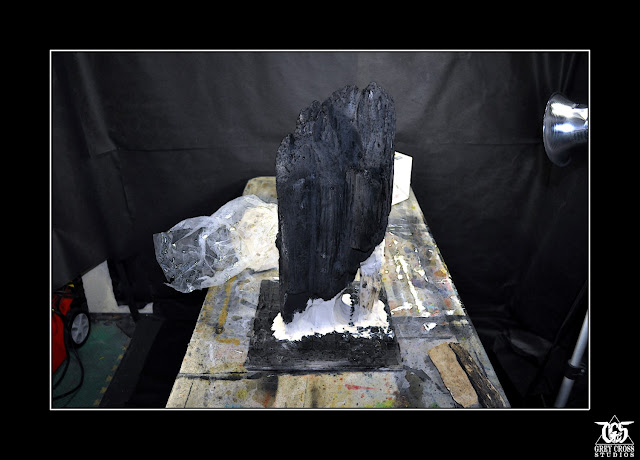 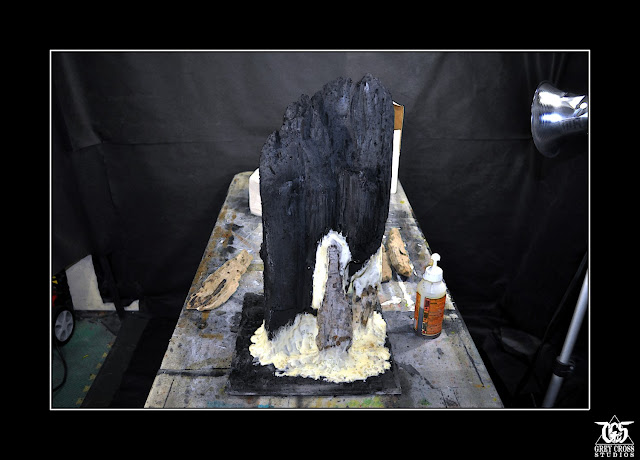 After consideration I still felt the symmetry was slightly off. So I've added one more piece to the left side to balance the whole piece. 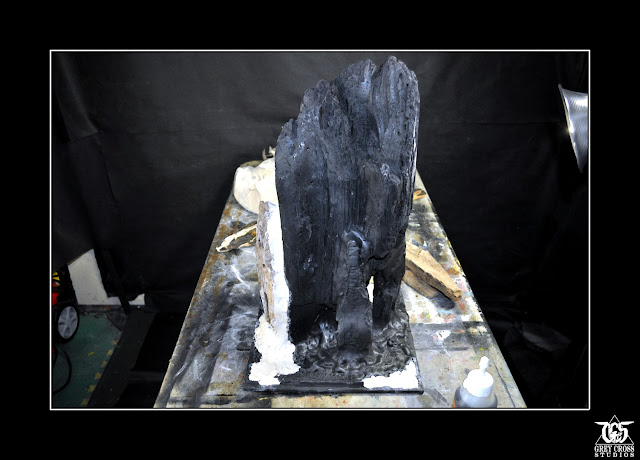 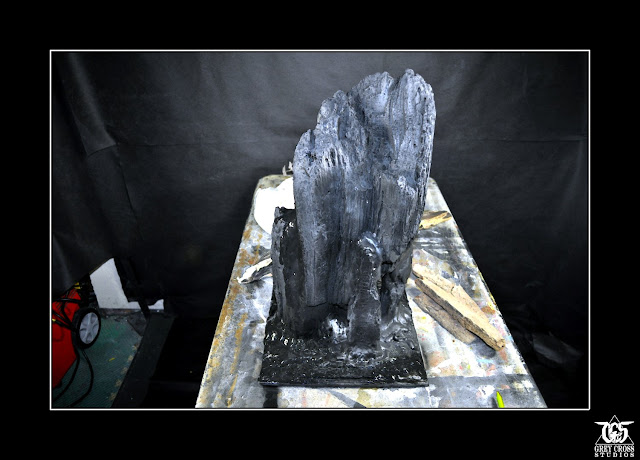 Step #4 The First Round Color

Here you see the first round color additions and polyurethane. Its a small beginning to a piece that eventually will be completely colored. But the experiment to add it in stages so that it gets deeper with each stage. Gauging how much to add in each stage will only happen once I've done it a few times. There are 7 colors in the first round. 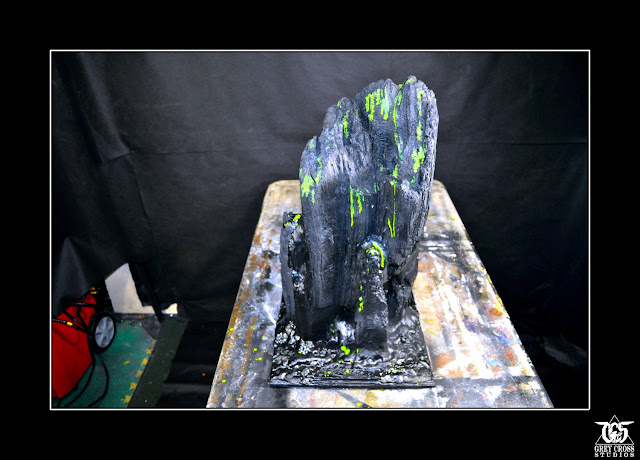 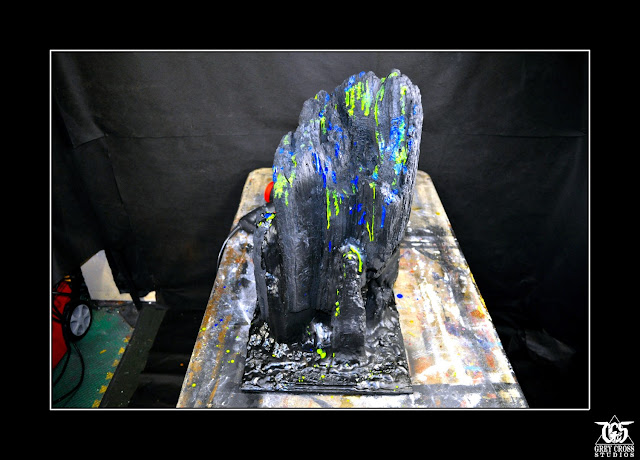 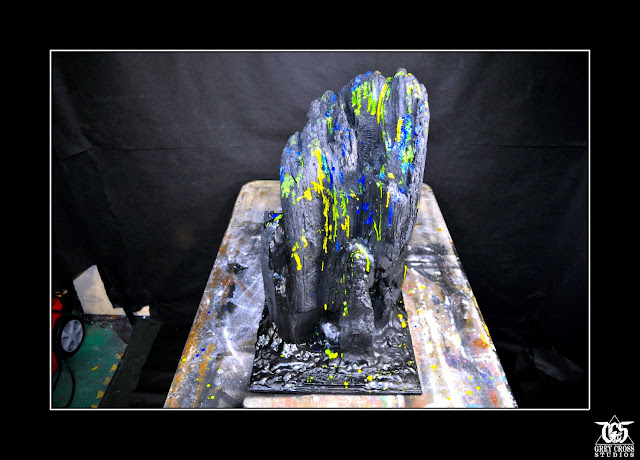 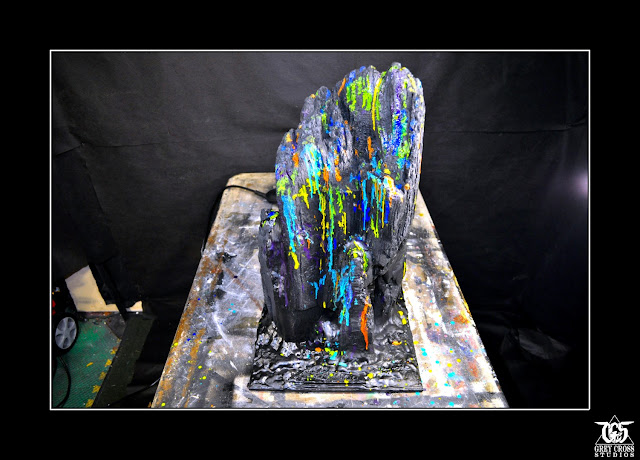 Here I have added another 10 colors to the original palet. I tried a few different patterns of wax. I used a splatter effect using a heat gun. I used a splash effect by laying the sculpture on its side. But in the end I decided starting the color towards the top with a soldering iron and just letting it drip down looked the best. It filled the wood grain out nicely also. So in the next few rounds I'll be sticking to just that pattern and most of the splash colors will be covered over. Here you see the piece with its second coat of polyurethane applied. 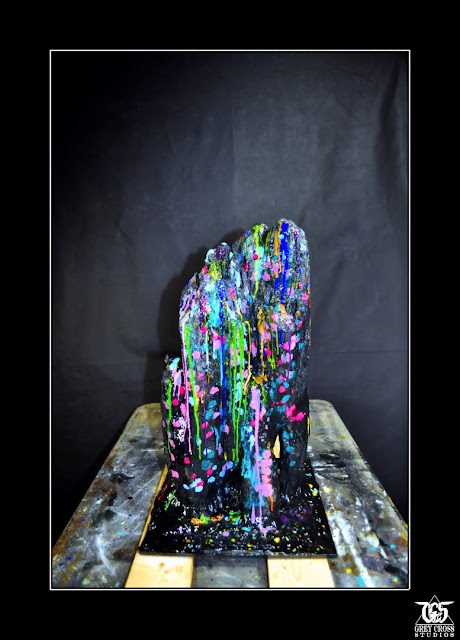 At this point my original concept was beginning to fail. In order to get the depth that I wanted, I needed to be able to melt the wax into a blend at each stage, but the polyurethane was not cooperating. Once the initial wax was placed using the soldering iron, it should have been spread in order to merge with the other colors using a heat gun or blower. But each time I did so the polyurethane which had dried in the previous layer would begin to buckle and crease. I had to admit that the original concept was failing. I would not get the depth I wanted in each layer. The photos show the next several layers of wax and how I was attempting to vary the flow to create depth without having to remelt each layer with the blower. 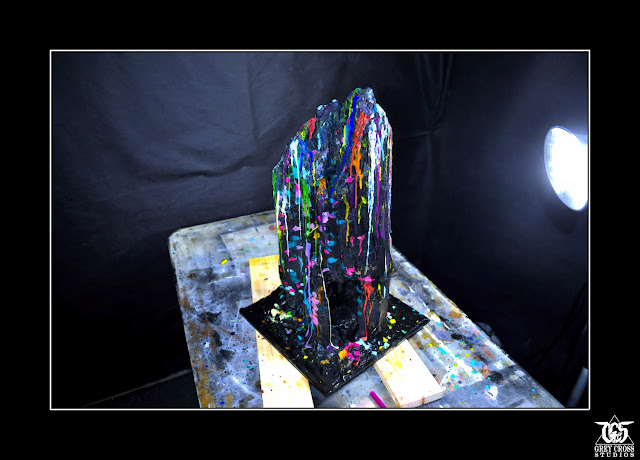 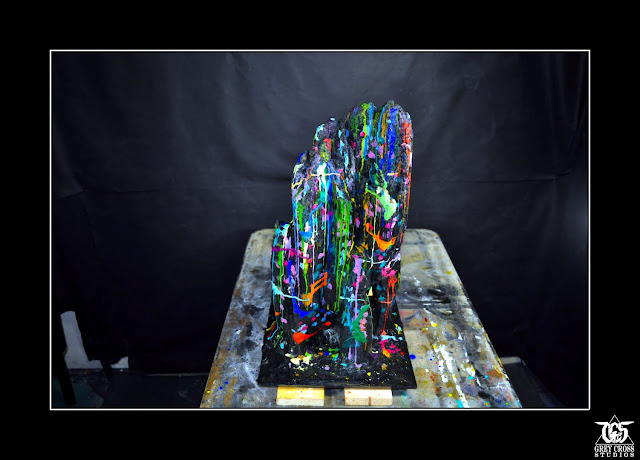 So at this point I had to admit defeat of the original objective. Depth could not be achieved in the way I had conceived. So a change of strategy was in order so that the project was not a loss. My solution was to overlay the polyurethane in the lower levels completely by adding a heavy layer of multi colors to the whole piece and cover over the previous layers totally. By doing this it would allow me to spread and merge the wax with the blower. The result would not be as much of a depth as I set out to achieve but should cause somewhat of a deeper layering if I applied the wax heavily enough. What you see here took about 2 days achieve with constant dripping and spreading. 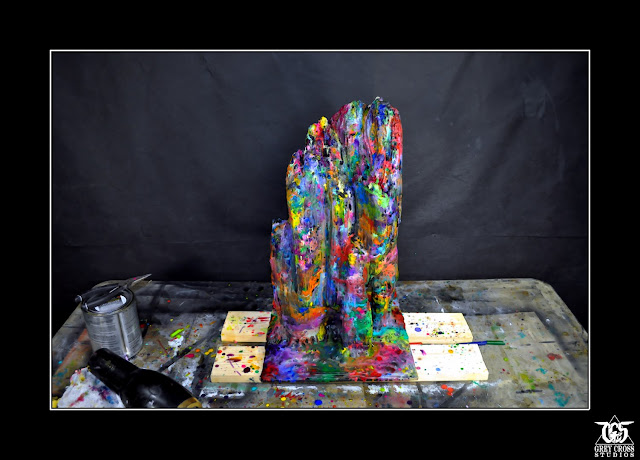 So in order to reclaim a bit of depth to the piece I've used a pearlescent overlay to the whole sculpture. This is achieved with a very light coating of pearl white acrylic which is laid on with a blending brush with a very light coat. The glow is created but the under color is not masked. The glow achieves a semblance of depth which I am not sure the photo really catches. Its not as deep as I wanted it to be, but its still a striking piece. 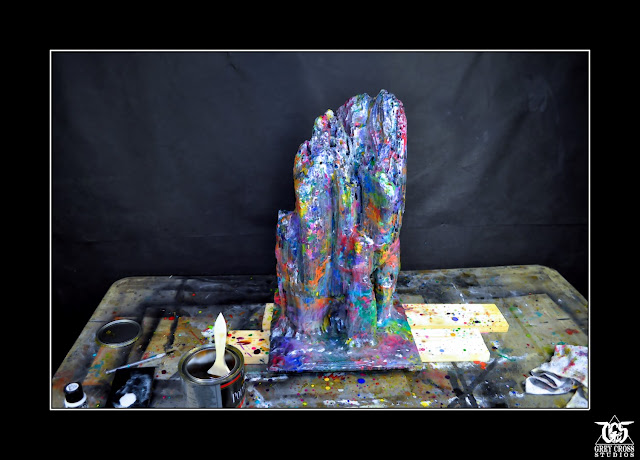 The final touches include two crucial components. One is the layering of the polyurethane over the whole sculpture. There are 6 coats applied. This helps considerably with adding depth to the piece. I could probably continue adding coats to get a deeper and deeper feel, but I think I would rather explore this component on future pieces. 6 coats seems to be enough. The second and final component is to give the piece a feeling of scale. I want it to feel massive, a towering edifice. I often pick up small items on spec when I shop or go to the second hand shops. In this case I had a beautiful winged griffin that had been a childrens toy. The detail on it was extremely well done and I felt it would be perfect for the final touch. I black based it first and then used the same technique applied to the melting of the wax on the sculpture, recreating the same texture. Just like the sculpture I overlayed it with pearlescent white and then a coat of polyurethane. I then found a suitable place to mount it atop the sculpture. And just like that it was complete!

While the original intent was not completely achieved, the learning experience of this piece was as always invaluable. I can apply what I've learned to future pieces and continue experimenting. I think the technique would have worked using a blend of acrylics instead of wax. That would eliminate the need to melt each layer. I will attempt this in the near future and see what I come up with.

I hope documenting this process was helpful to you!