There are many phases that go into your creation of a specific piece of art. Many ideas, many emotions, many pieces that come together in the final work. But a potential buyer of that piece of art knows none of them. This is why its crucial that you do your homework on aspects of your art that are not as easy to see with the naked eye.

Once a piece of art is finished, the details to marketing it are just as important. Here is one of the most important aspects of what I call the Post-Art Phase which should always be in place before the art is seen either live or online.

So lets examine the naming of a piece, the title, the label, etc.
It may seem like a common place thing to name your piece. But you'd be surprised how many people either don't name their work at all, or name it something generic like "Trees #8". Your name is the absolutely the most important thing after the art itself. Keep in mind that a viewer of your art knows absolutely nothing about that piece of art. Sometimes this is fine, but a good name will subtly guide the viewers imagination. "Trees #8" tells you two things only. The piece has trees in it and its the 8th set of trees the artist created. Who cares if its its the 8th piece? The only time that is important is if the piece is the first of a series or a prototype and even that information can be imparted elsewhere. There is no imagination to such a generic name and face it, we are known for our creativity. Why would we invest a great deal of time in the piece just to drop the ball on the name?

Many artists are not wordsmiths though and they find this time consuming and aggravating. I try very hard to impart a direction to the name I choose, especially if the piece has a bit of abstraction to it. Take the example of this piece: 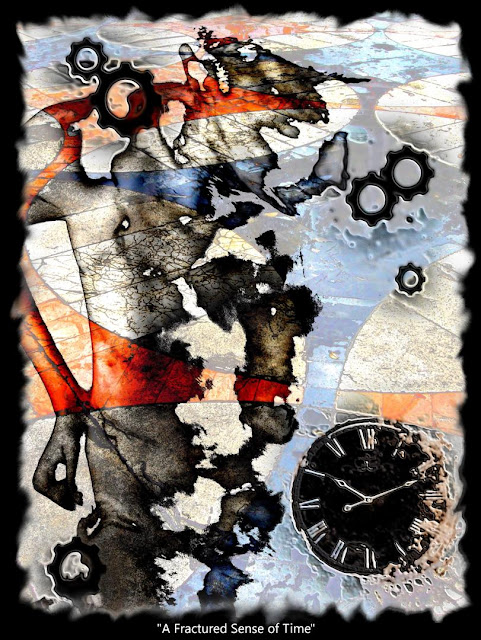 I chose the name "A Fractured Sense of Time" because to me the artist that was what I trying to represent. The broken clock represented time, the fractured outline of the man staring at it and the gear works around him represent his minds insistence that time is a concrete thing, yet when we are constantly fracturing into smaller and longer components of time.

Now I could have simply called the piece "Time #1". But what does that tell the viewer? Absolutely nothing. With a creative name I've given the viewer some kind of framework for where my mind was when I created the piece, yet (and this is important), I've not taken away from the viewers own imagination. I've only nudged it a bit.

If you rush through the naming process because it aggravates you then your doing your art a disservice. So here are my tips for brainstorming names.

First look at the piece and clearly state in one sentence what it means to you personally. Don't worry about phrasing or rhythm, just jot down that one sentence. For example in the piece above, my starting sentence may be:


Now begin to eat away at the sentence, chopping out parts of it that are not needed. In this case I could break it down to:


Now reconsider some of the words your using. What emotions to certain words evoke within you personally?

Try different word uses out and look for words less commonly used in a name. Don't be afraid to pull out the Thesaurus or to bring up thesaurus.com on you computer. Compare words. Rework your sentence, trying different combinations of words:

There is no exact set of steps to guide you, but you will find after time that it becomes much easier and that names come to mind quicker and with more ease over time.

Now what about purely abstract pieces? How do you name something that you can't really grasp. The above piece represented "time" to me. But what if it was this piece? 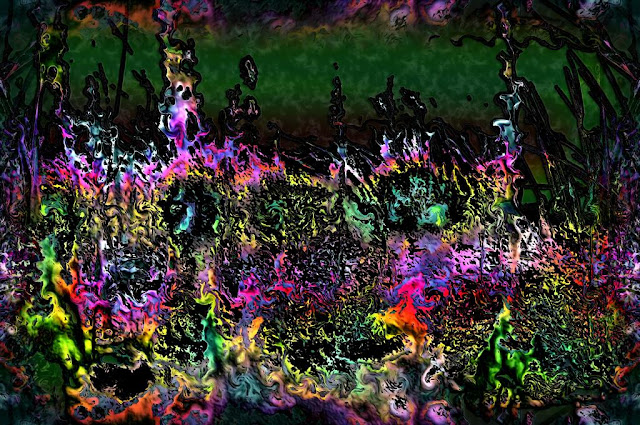 How do we get a grasp on a name for something that is a blend of colors? Take a moment and look at the piece and make yourself a list. What words come to mind when you look at it? In this piece I see

Note that some of the words are specific, others are merely emotion that the piece invokes. You may see something completely different than I saw, but these are the words that come to mind. From that the final name of the piece became:

"To Dance in Ecstatic Grace"

That is what I see. Again the title is just enough to evoke emotion, but not enough to take away from the viewers imagination. All sorts of images to come to my mind just from that name. I see dryads frolicking in the sunshine. I see myself laying among the flowers in a half doze. I see many many things.

In the end I have combined imagination with emotion to create a name that feels right for the piece.

Now what about a piece that is just really commonplace? I don't mean that in an insulting way, but in a way where you are dealing with subject content that many others focus on also. Lets look at another example: 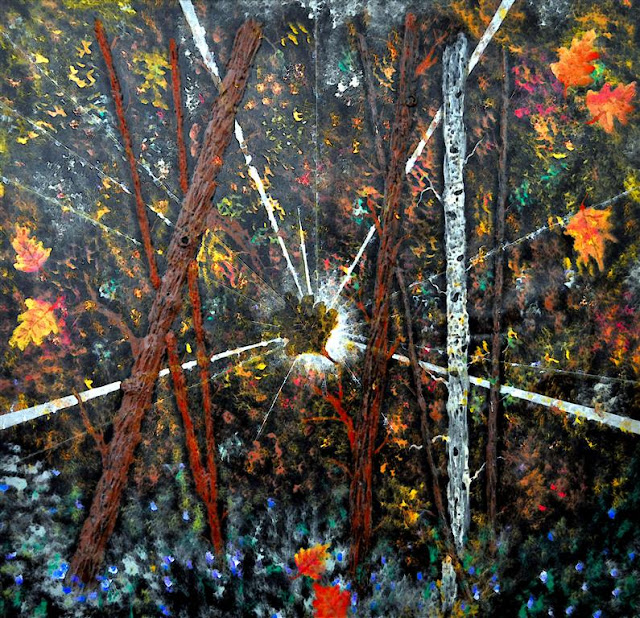 This was an early canvas piece I did in the first year as a Visual Artist. The trunks of the trees were done with grout to make them three dimensional. The canvas is actually 5 feet in dimension.

The subject matter is "trees" or "forest" or perhaps "autumn". Each of which would be logical names for the piece. But using the same techniques I've already discussed I tried to search out a name that wasn't so commonplace. I made my list (and mind you this was when I was first starting out and really crappy at naming things). My list included the words above but it also included one which fit but perhaps wasn't as obvious. The word "night". The canvas was done on a black background, it felt to me like it was night time not day. My final choice for a name was:

In this case the name felt right but I felt I should research it a bit first. I knew Nightshade was a poisonous plant but that was all. dictionary.com listed the meaning as:

nightshade
[nahyt-sheyd]
Spell  Syllables
Word Origin
noun
1.
any of various plants of the genus Solanum, especially the black nightshade or the bittersweet.
2.
any of various other related plants, as the deadly nightshade.

The name felt right and the meanings of the word did not feel out of place for the piece. Because it was a poisonous plant it evoked a new level of emotion to the piece that I'd really been searching for. It worked!

Now there is one last idea that many people overlook but I will mention as a potential concept in naming a piece, that is the concept of misspelling certain words. If you look above at the definition of the word Nightshade you'll not that I highlighted the correct pronunciation of the word. That is because I actually considered that spelling for the name of the piece. Ultimately I ruled it out and went with the proper spelling, but in many cases you can use misspelling to your advantage and make certain things stand out. A perfect example of this is me. My first name is spelled with an E instead of a an A. Grey is a perfectly acceptable spelling, but you'd be surprised at the number of people who question the spelling. I always explain and I mention that I believe the English use Grey instead of Gray in many cases. I have now just reinforced my name with the person I am meeting. They rarely forget it after that. The same applies to a piece of art.

One last example. I have a piece called "Cause and Affect". The common phrase is "Cause and Effect", but I had double meaning in the naming and using of the word "Affect" that fit the piece. But because someone questions the spelling in their mind helps reinforce the persons memory of that piece. One simple letter change and not even a misspelling, but a change of a common phrase worked.

So there you have a few ideas on naming. In the next column in this series we'll take a look at other aspects of the After-Art Phase. I hope this helps. Remember the more you do it, the easier it gets!