Most who use the internet these days knows what "click bait" is. It is the title of a story where the title lures you in to a pretty crappy article. For example "I Couldn't Take My Eyes of These Great Photos". This also works with photos that have absolutely nothing to do with the story its attached to.

Artists have their own unique click bate words that they use to attract viewers to their work. Some of those include "I'm the next Picasso" and "this is the best thing I've ever created".  But the worst is "this is totally unlike anything else"

The reason this one bothers me the most is because there is absolutely nothing in this world that hasn't already been tried at least once and probably several times. You may think you've stumbled on something totally unique, but its almost a certainty that you haven't.

Does this mean you should give up because there isn't anything left to create? By no means. What it means is that you "the artist" are the totally unique thing. Its not in any one thing that you create or new technique you may come up with. Its in the totality of your development as an artist and the way you combine your skills to create new works.

For example, I do a form of art that uses crayola crayons (see piece at top of page). Crayons are nothing unique. Every child uses them. How I use them is just different and involves a soldering iron and a whole lot of burned fingers. But I never say "this is unique" about the technique even though I pride myself on having developed the technique. But it isn't just the crayon that makes the work unique, its a combination of other skills I use with it. The piece above could easily be described as "a totally unique wax sculpture" or a totally unique driftwood sculpture" or as "a totally unique foaming glue sculpture". None of which I use with any of the works created using this combination of techniques.

As an experimental artist, I cannot and will not rely on artist click bate to describe a work. Instead I rely on the beauty of the piece and the title of the piece to help convey the unique qualities of it. If a person is captured by the beauty of uniqueness of a piece of art, its because it captures their eye first. It is not because you described the technique as "totally unique and the most awesome thing ever".

There is time later once you get a person interested in the piece to describe what makes it different. I had visitors to the studio a short time back who were looking admiringly at a shelf of art when I mentioned all the pieces were made from driftwood I'd hauled out of the river and dried. There were amazed gazes all around because some of the pieces were about as far removed from driftwood as they could be. If I'd said from the start "this is a shelf of totally unique driftwood sculptures" it wouldn't have phased them in the least or served the best interest of attracting buyers. Sometimes its knowing WHEN to say something about your work to create a mystique around it.

As I mentioned above though, a great title for your work can be just as effective as click bate in getting a person to look closer at a specific piece. Take the following piece for example. 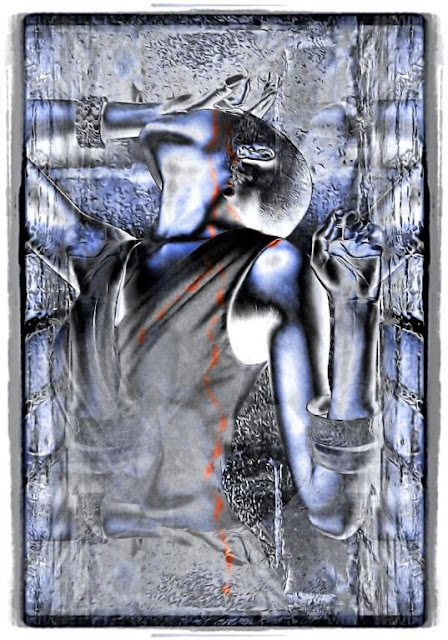 If I had named the piece "Women in Blue #6" then all I'm telling the viewer is the same thing they can see with their naked eye and that I've made five others before her. Instead I let the piece speak to me. Who was this woman? What was she saying? In my minds eye I pictured a blues singer in a 1940's club, singing a song that meant so much to her that she was crying tears while she sang. The song hurt her because someone had broken her heart, thus the symbolism of the blood red of the tears. The piece eventually became named after George Gershwin's song of the same name "Rhapsody in Blue". While the song George composed really had nothing to do with a sad blues singer, the title fit the piece and in turn gave the viewer just a bit of guidance to what I was trying to say in the piece. Is this title click bate? By no means. But it is a direction to lure the viewer into the piece.

The era of click bate will die eventually. Even now its not as prominent as it was a few years ago. Like all silly trends it will eventually play itself out.

I suppose the bottom line is, that if you think your work is not strong enough to stand on its own merits without click bating it, then there is no need for it. If your work is NOT strong enough then that is the thing you need to work on, not better advertising gimmicks.