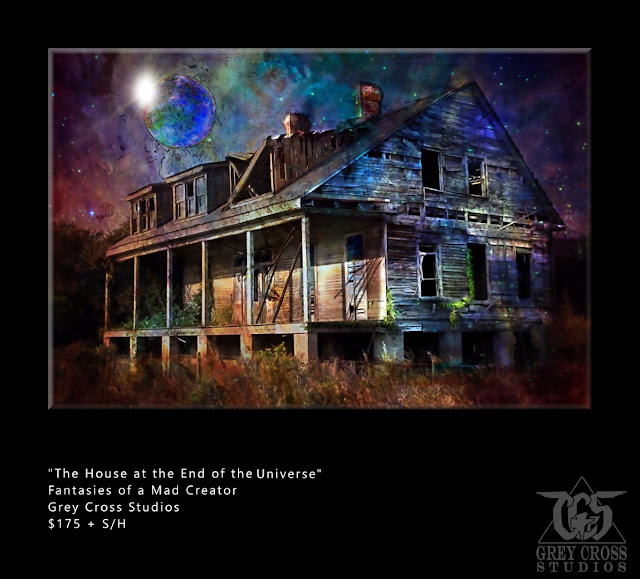 Where am I? Am I dreaming? Am I still in the virtual world of cyberspace, the neural-net?


I sat up on the dry parched Earth surrounded by dead grass and gazed up. Above me, the entire cosmos revealed its mystery, twinkling its secrets to me, the anti-universe of something that is not quite nothing—me.

I’ve had these dreams before, I thought, as I reached down and took a pinch of the dirt and let its fine dust return to the Earth. Earth? This cannot be the Earth!

Behind a rooftop, the globe upon which the only home mankind has ever written history, was now starting to rise behind the remnants of a timber house. It continued to rise, surrounded by hues of deep blues and purple, and the sparkle of a billion stars.

Well, wherever I am, it is revolving at quite some speed! Why can’t I remember anything?

A booming voice echoed as if from the creator of it all, “Because I have made it so.”

I felt my heart start to race as I climbed to my feet. “Hello?” I said.

There was no reply.

I looked over my shoulder and turned in amazement. I could see all the way to the horizon, and no longer was the creator attempting to hide the fact, that this isn’t real. The dead grass was now rippling like a shimmering mirage as far as the eye could see.

Gradually, I started walking towards it.

The voice boomed again, “I wouldn’t do that if I were you.”

I stopped at the edge of the remaining Earth grass and looked down at my bare feet, where my toes were now also starting to ripple. I stepped back one pace and asked, “Who are you?”

A laugh from above echoed from the cosmos, followed by the voice, “You are asking me who I am, and yet, you don’t know who you are.”

He, it, is right! Who the hell am I? I thought as panic struck me.

I looked back at the timber house where an old man was now sat with his legs dangling over the edge of the porch. “You need to calm down,” he said, before easing himself off the porch and onto the grass. The man proceeded towards me, so I made my way forward to meet him.

“You know who I am, you will know me as the one you have been searching for, your entire life, and the one before it.”

“Oh, you flatter me. You’ve called me, among other things, the system, the artificial-intelligence, and many expletives over the years, yet now you are calling me, God.”

We stared into each other’s eyes from only a meter apart. His were deep grey with flecks of black exploding from the pupils. The whites of his eyes were perfect pearls, and his face weary, worn as if from years of concern.

“So you found me. I’ll switch your synapses back on, then you’ll remember everything, even yourself.”

I gasped as my thoughts returned to their full potential and I started to interrogate the contents of my mind, then I said, “I hacked your system.”

“For swearing, or hacking?”

The man smiled, “I know,” then added, “You should be sorry for stealing those androids and breaking in to CERN. You know my Commandments.”

I looked around and asked, “Where are we?”

The man raised both hands slightly and replied, “Here, the end of the universe.”

Puzzled, I again looked either side then up at the canopy of stars above me. “Where is the end of the universe?” I asked before returning my gaze upon him.

The man turned and started to walk toward the house muttering, “Your mind.”

Andrew Seas has worked in IT for most of his career, but has always enjoyed painting art and writing sci-fi (primarily cyberpunk) and poetry. Many years ago a ‘sage’ introduced himself to Andrew from the aether—yes, another dimension! Since then this sage has encouraged him to continue on a more artistic path.

You can learn more about Andrew at his website: www.androcies.com
at 10:16 PM