There are many things we miss that covid has taken away from us. Here in New Orleans, the loss of the upcoming Mardi Gras season is one of the hardest to have taken away. While there is hope for the future in the form of vaccines, they will not come soon enough to save Mardi Gras 2021.

For residence its not about the liquor or partying. Its about the beauty, the pageantry, and the history of the celebration. And yes the art. Some this year have taken the ingenious step of turning their homes into giant freestanding Mardi Gras floats. In some case (for those that can afford it at least), they have hired royal float builders who are suffering this year from not having the income that comes from building floats for the areas hundreds of parades.

For those of us who can't hire float designers, but still want to play a part, we are taking the time to plan our own house floats. In fact I am sure that this may well become a yearly tradition in future years even after Mardi Gras is once again a yearly phenomenon.

After some consideration Billy and I have decided to add our art and ingenuity to making this Mardi Gras season as unforgettable as we can. As a result we are going to create a 12 foot long by 8 foot high tableau in front of the house.

Its taken some ingenuity to come up with an idea. But while we brainstorm the details we will begin to build the frame for our float in the coming days and weeks.

Basically we are going to build a frame that attaches to the two pillars on the front of the house. The frame will only be 2 feet out from the house in order to allow plenty of room on the sidewalk. Hopefully the city will forgive if we encroach a little onto public property. 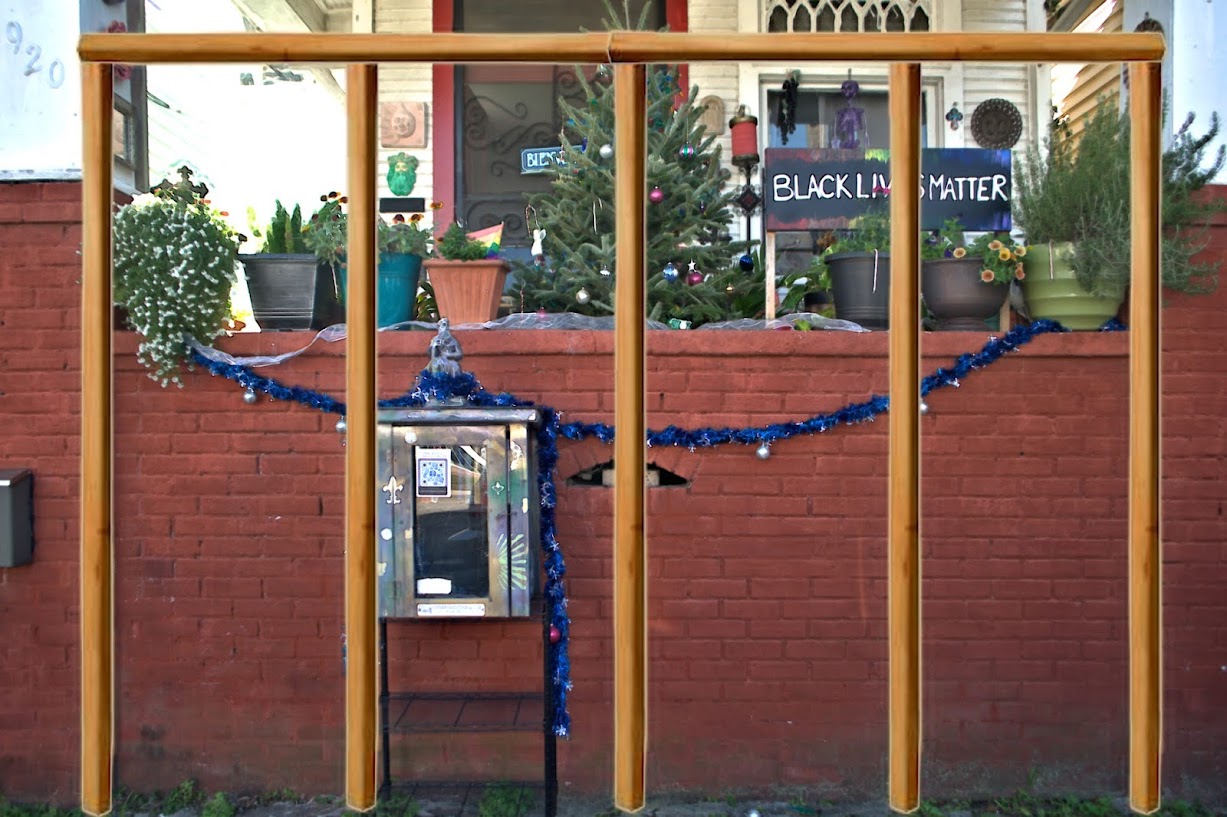 After the frame is attached, we will then attach two styrofoam panels to frame. Styrofoam is the worlds greatest substance. It can be painted on like a canvas, cut into, melted, or added to. 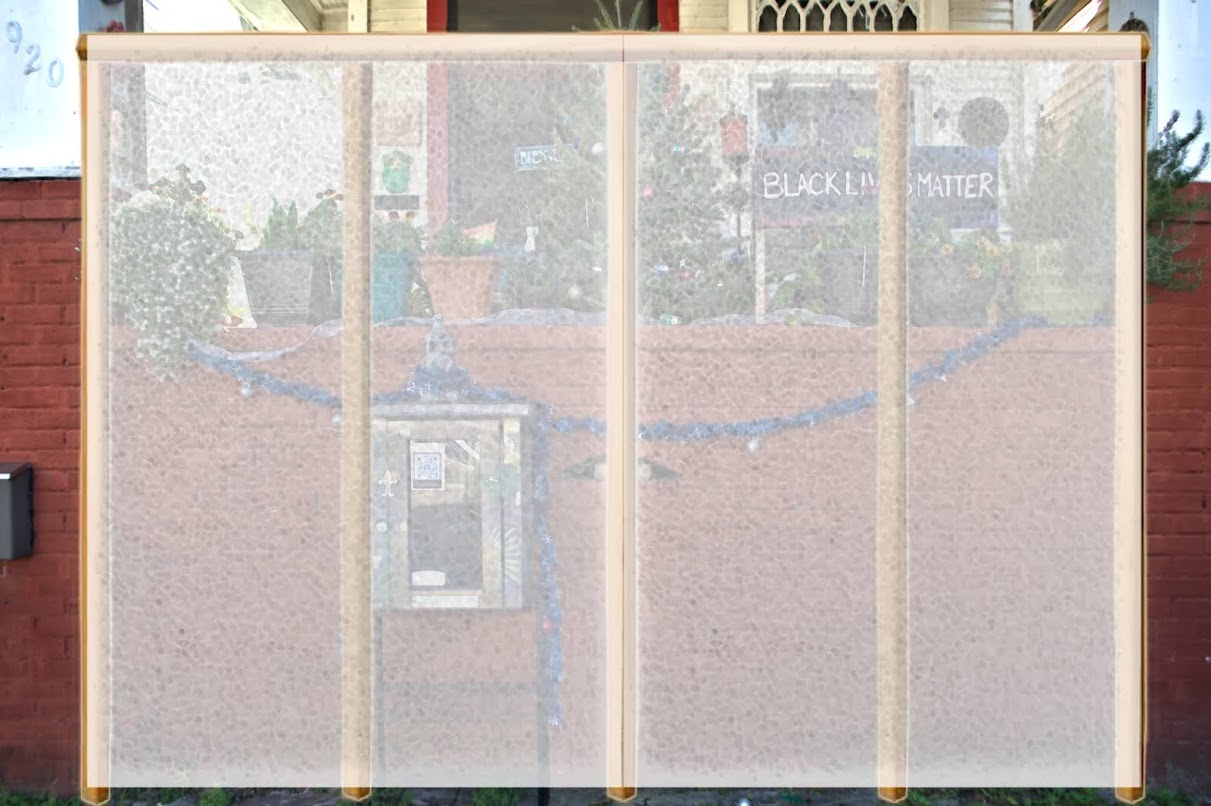 From their the skies the limits for designing a theme. I'll of course share step by step images as we create the thing. But I have no doubt it will be of epic proportions!
Our time frame is to have the frame and panels installed by New Years day 2021. Twelfth Night begins the Mardi Gras season on January 5th and Fat Tuesday ends the celebration on February 16th. So we have only so much time to get our act together and get this built.
Watch this page for updates.

Well here is an approximation of what the Mardi Gras Tableau will look like. A lot of details are subject to change, but at least I have a good grasp of the theme now.

11 Days to Twelfth Night and tomorrow is the first warm day where I will be able to work outside. 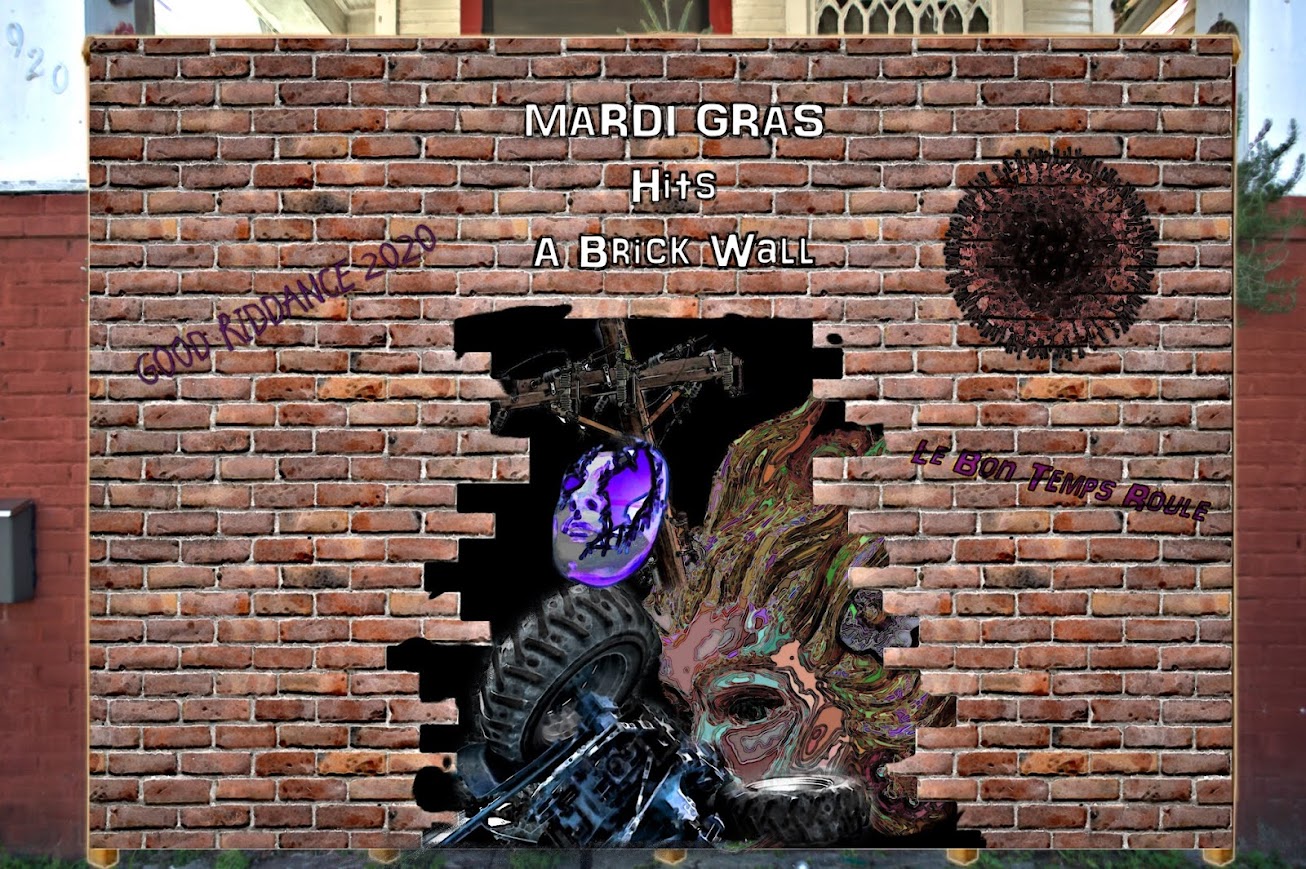 The past few days have seen the construction of a enormous 8' x 12' frame and the stryrofoam facing that will turn it into a working canvas for the project. So far so good but the wind is a bitch in getting the panels in place. Here are work in progress photos for it! 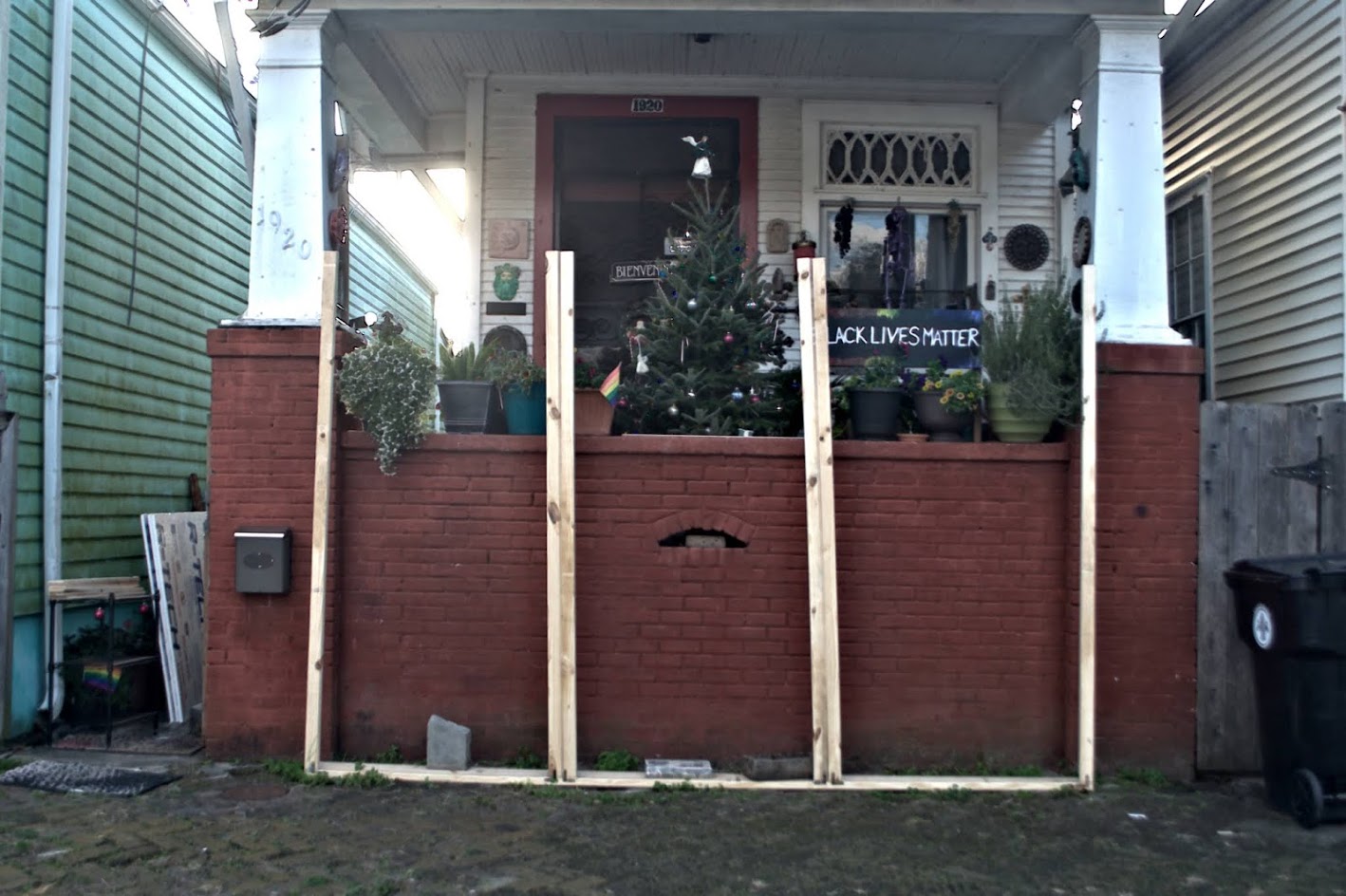 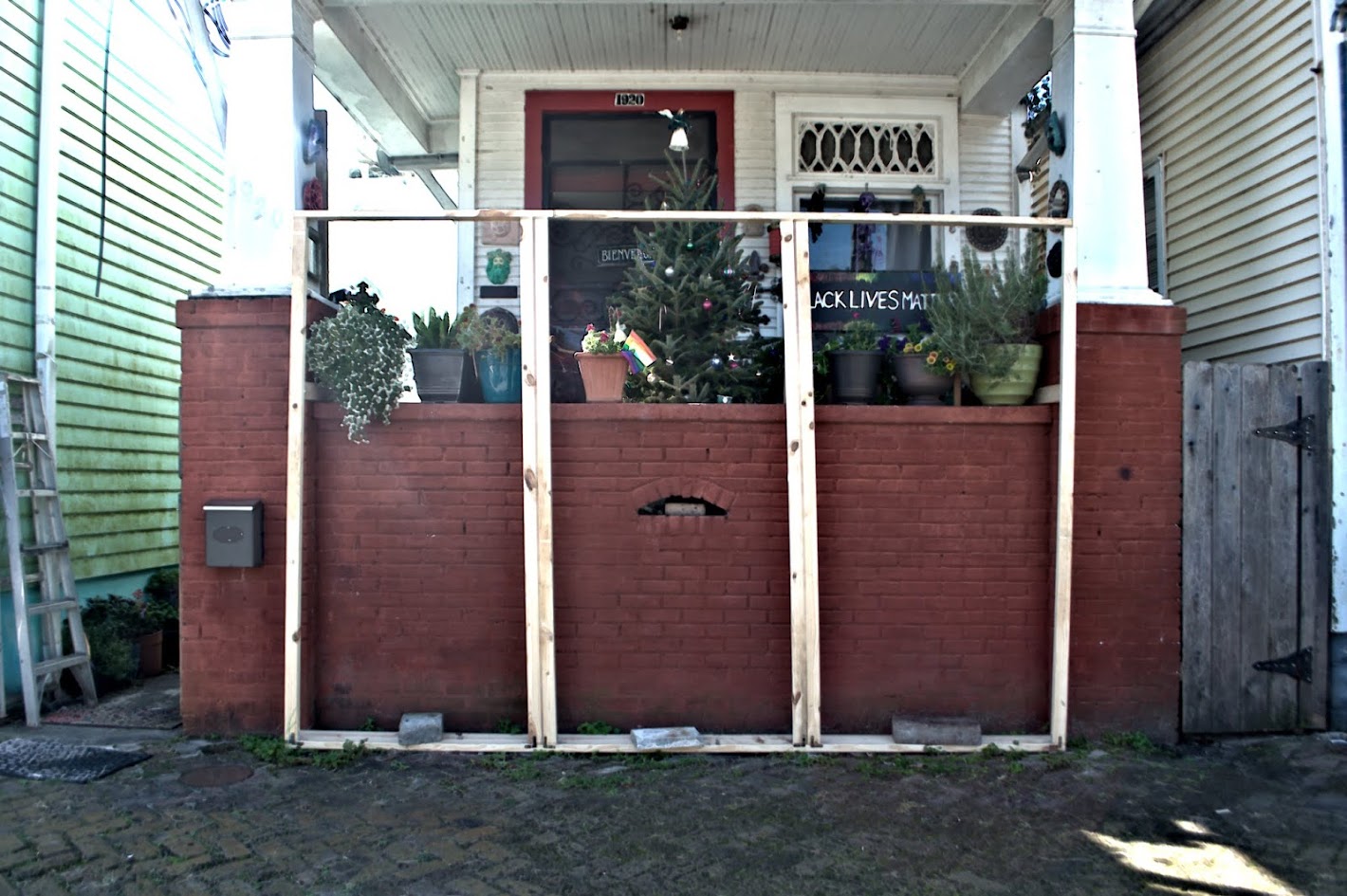 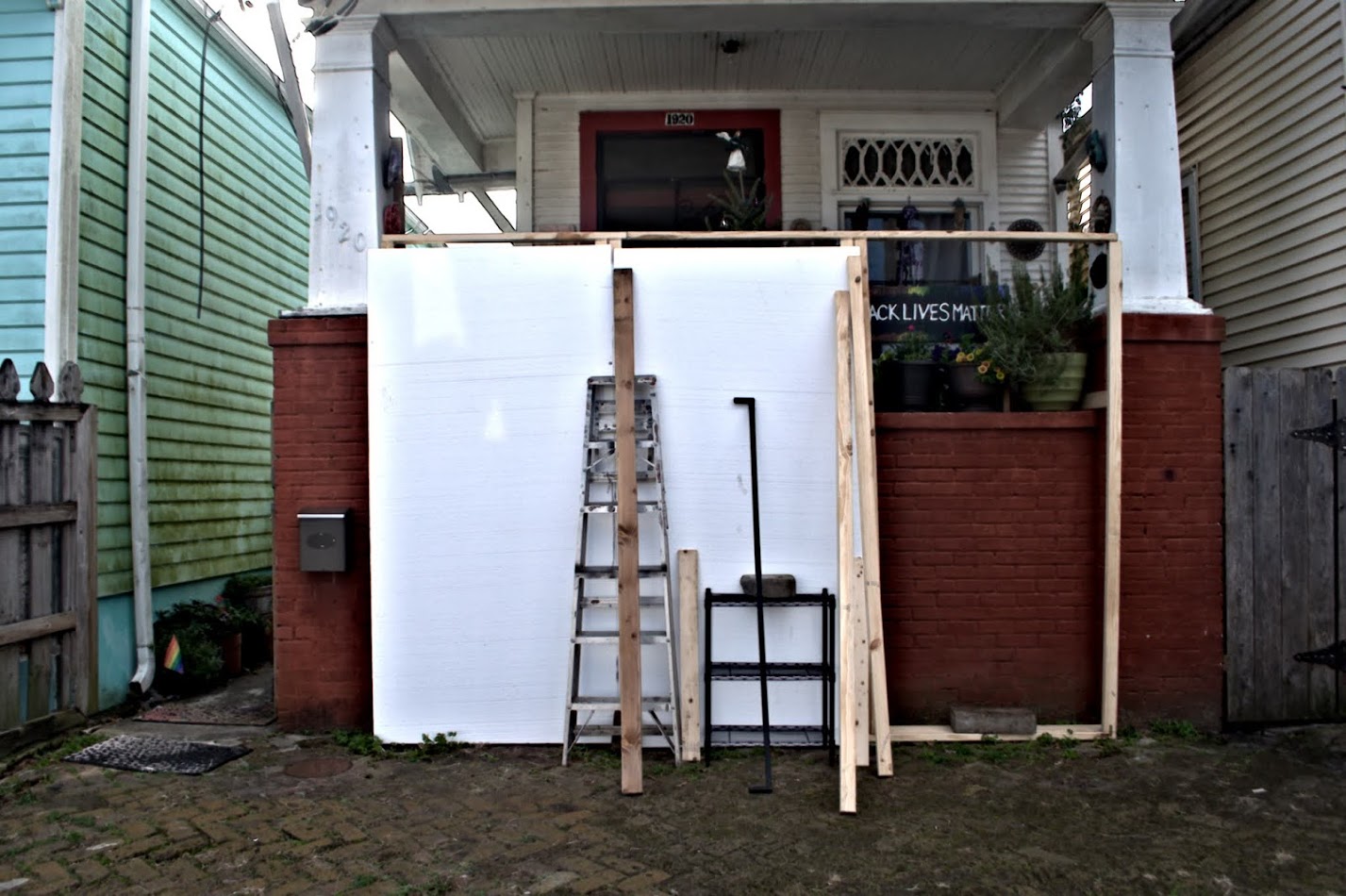 And here it is completed and ready to become art! 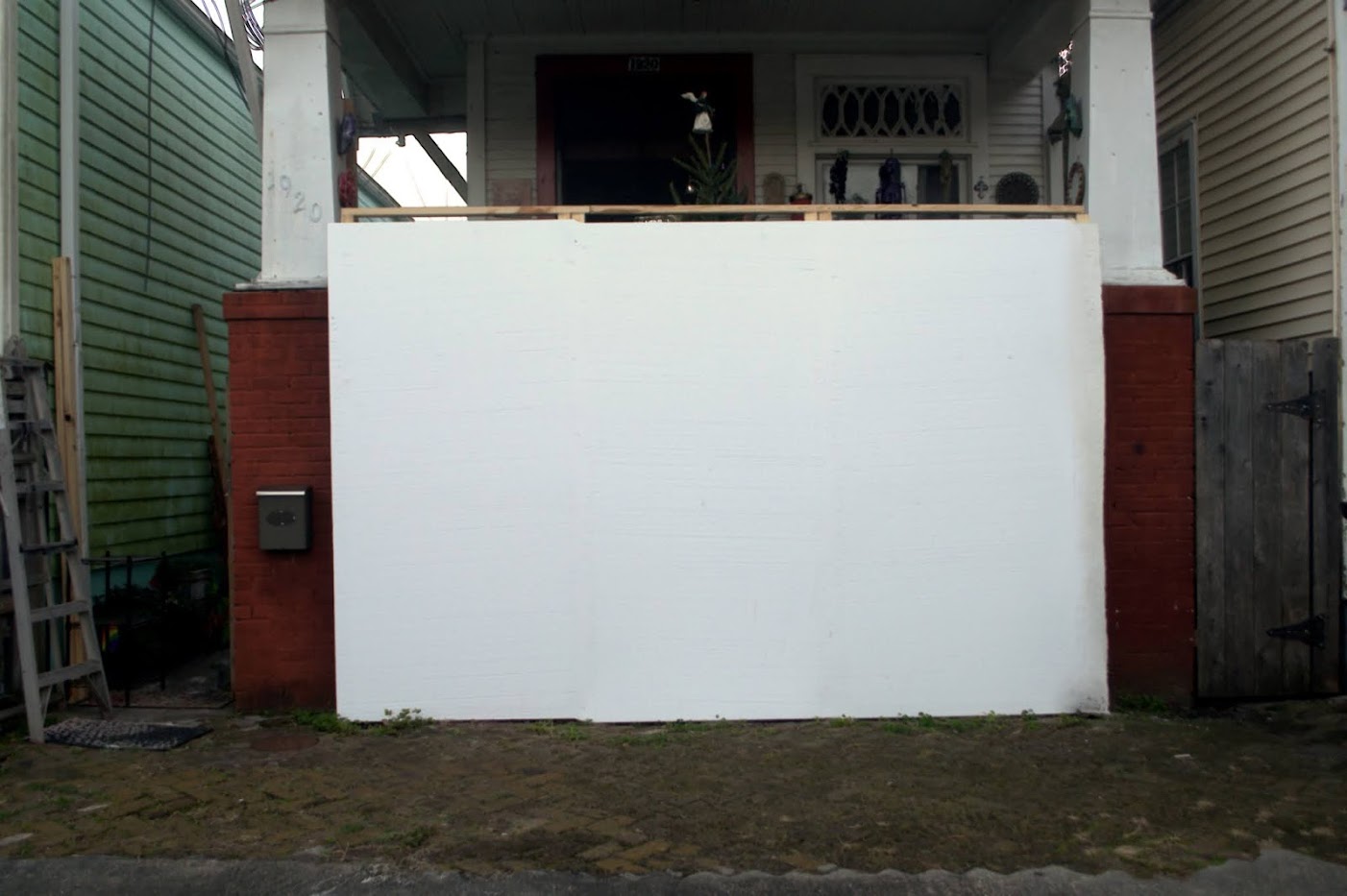 Here is the wall lit up. I want it to be seen at night and I want to work on it at night. So it made sense to light it up now. It also keep kids from messing with it. 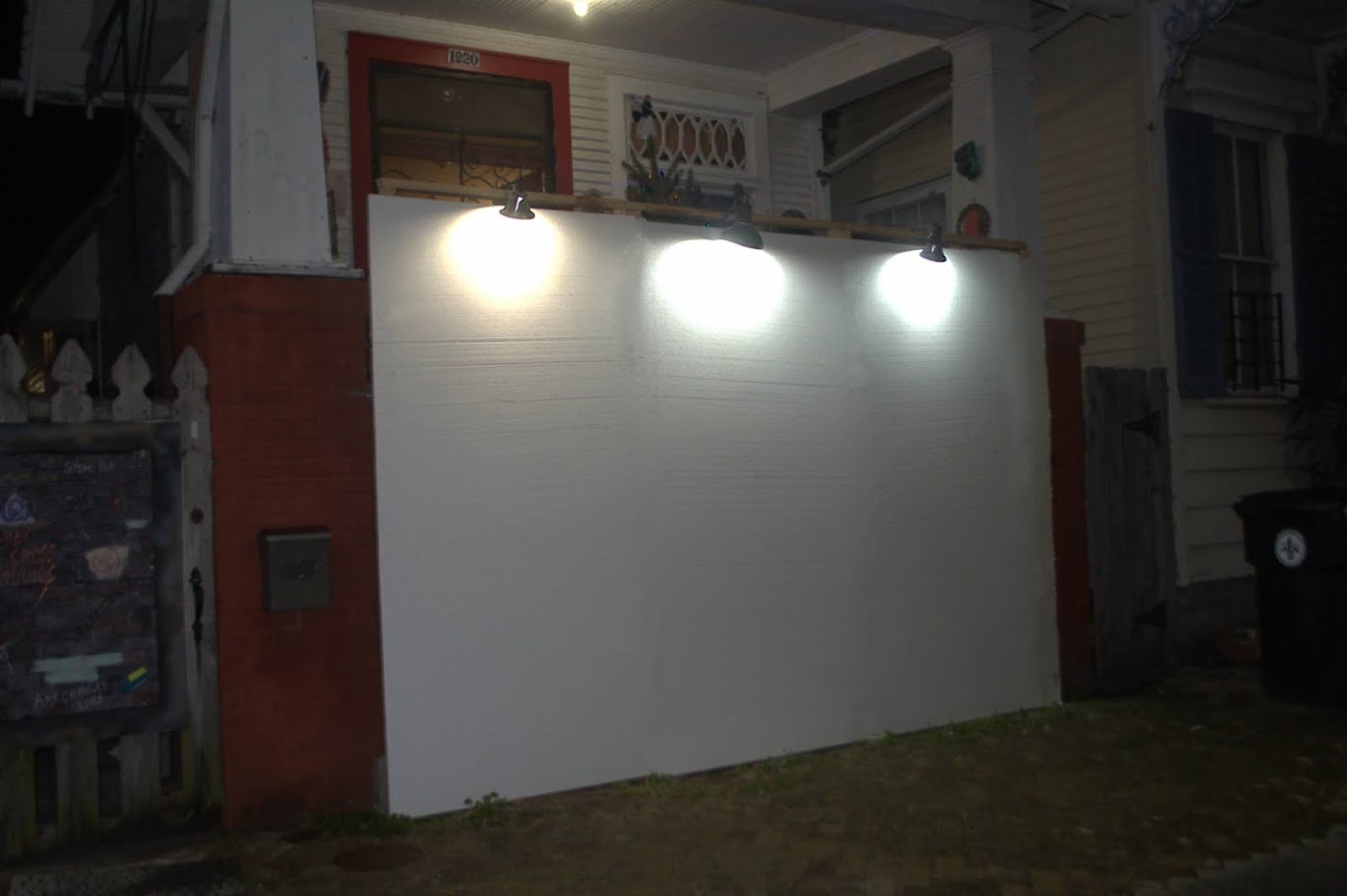 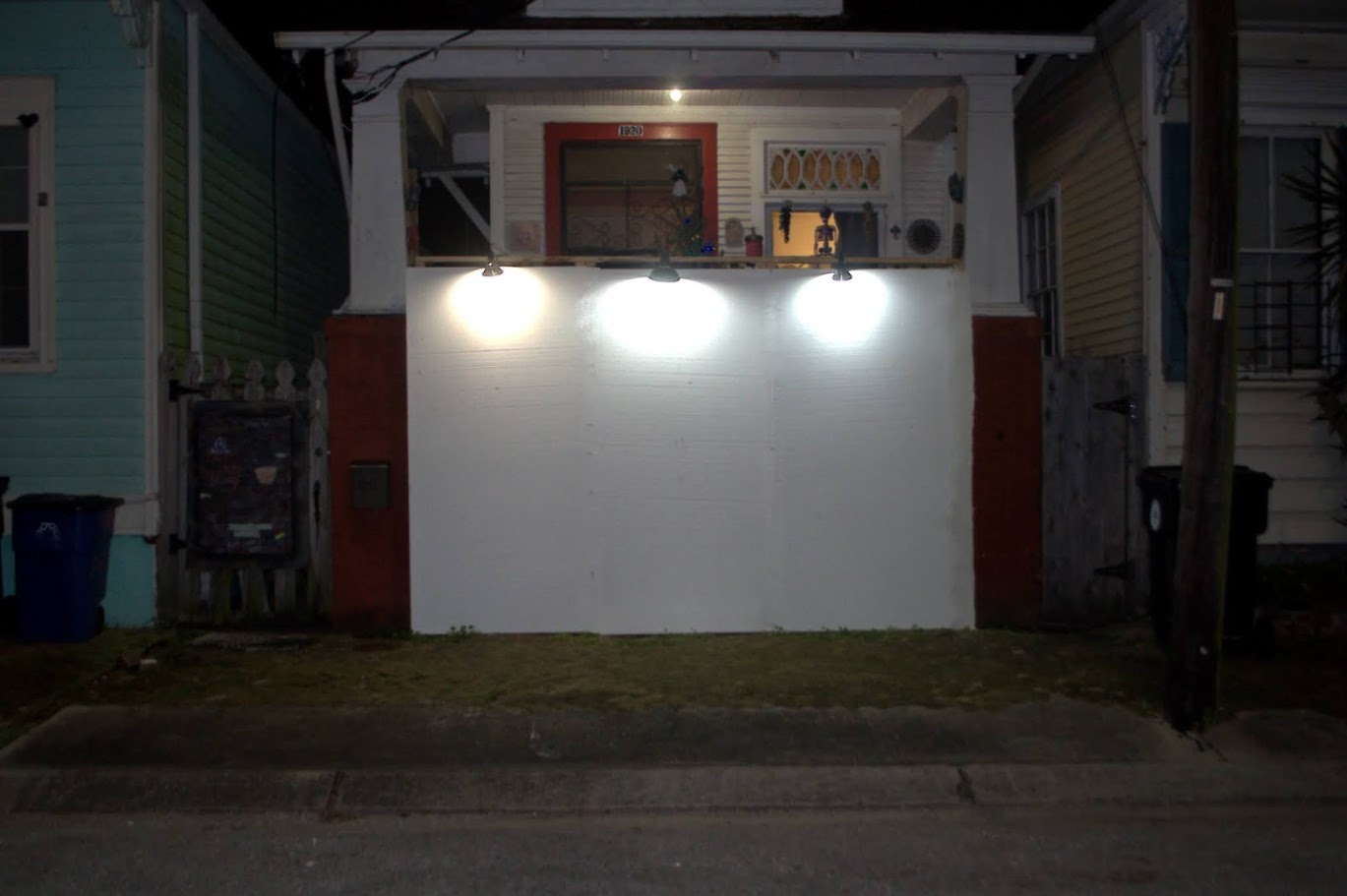 A wonderful first day of the new year out in the sun gridding the mural! A slow process but it will make things so much easier later. 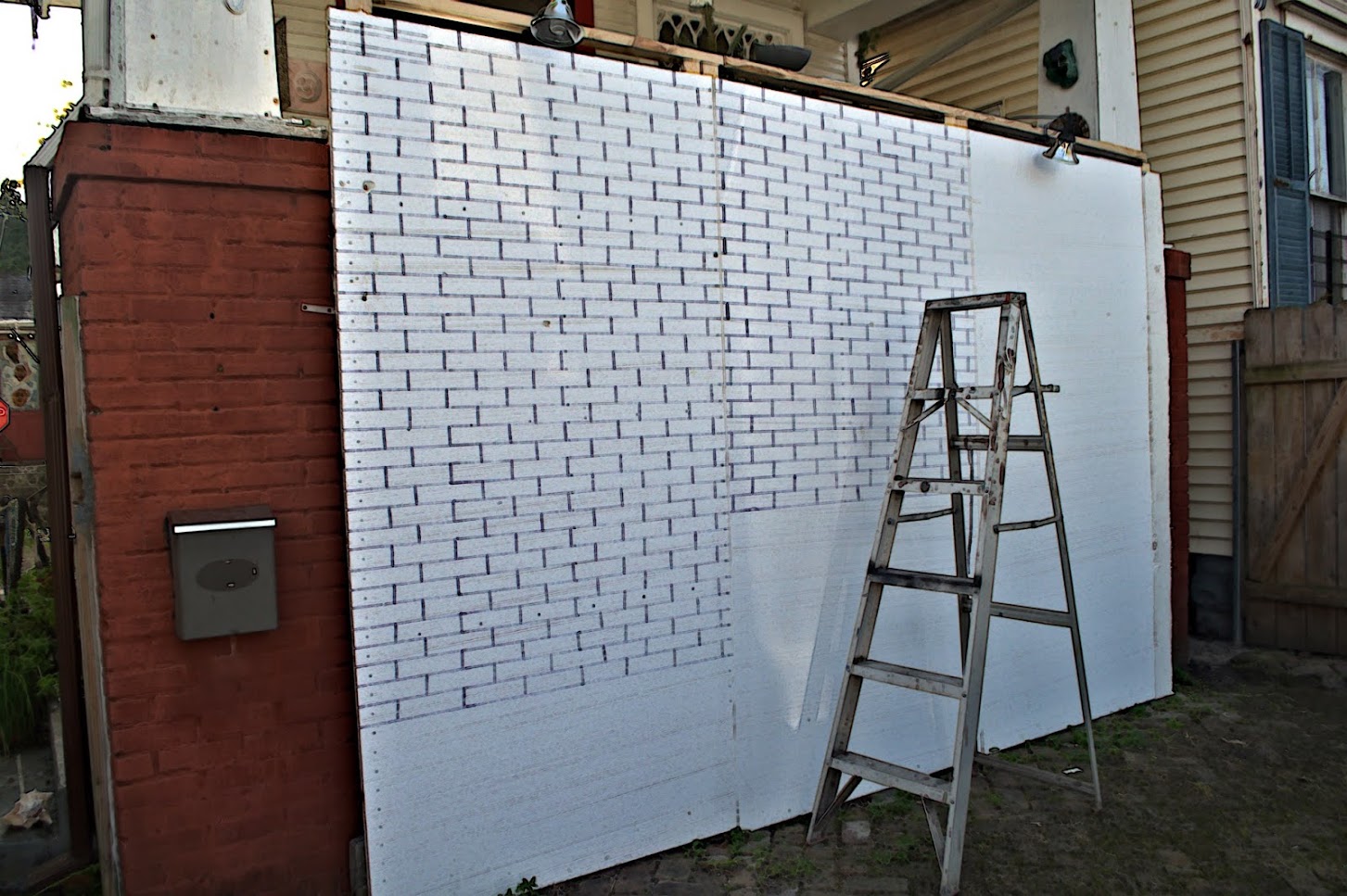 Finished! Approximately 8 hours to grid it out 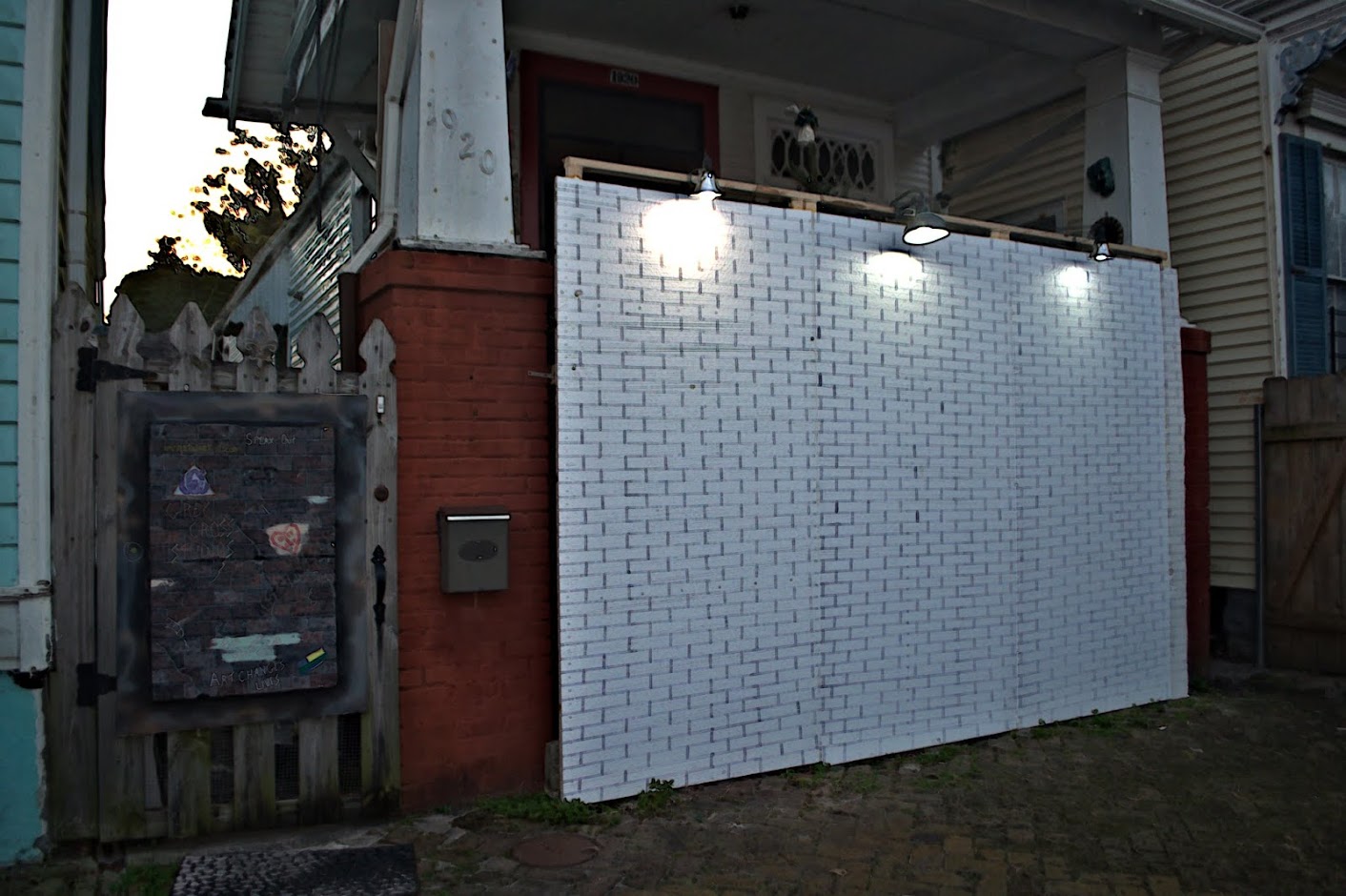 Today began the prep work for cutting and melting the styrofoam. Lines were cut using a heat pen that went over all the outlines of the bricks The first panel I used spray paint as a melting medium for the lines once they were cut. But I suspect that the company that produces the panels changed the formula and I found the spray paint wasn't working as well as in the past. So I switched to pure heat at 300 degrees to melt the line work properly. This is fast work. You can only let the heat gun gun graze the surface or it will melt a very large hole in the panel. The advantage of the using heat is that it tightens the panel up, making it tougher. I would have had to have gone over it with the heat gun anyway for that purpose.

After the heating of panel #1. I used the heat pen to cut out the center of panel #2 in order to create a hole in brick work. After that was complete I went back and cut the line work and heated panel #2. That leaves just panel #3 for tomorrow. After that I can begin some of the base painting.

I also went to the store and bought two plastic lengths of pipe. The pipes will be attached to the point where each panel meets, thus causing more continuity and hiding any flaws that are showing between the panels. The pipes will be spray painted silver first and then attached. This will give the illusion of pipes stretching up the wall as is often seen on real brick walls. The pipes are 12 feet tall though, so I will use the extra 4 feet above the wall to attach Mardi Gras flags to later. Here is a look at the finished work for today.

As a sidenote, I also bought a box yesterday to use as a post office parcel container. I put it up beneath the mailbox so packages can get put into it when delivered. 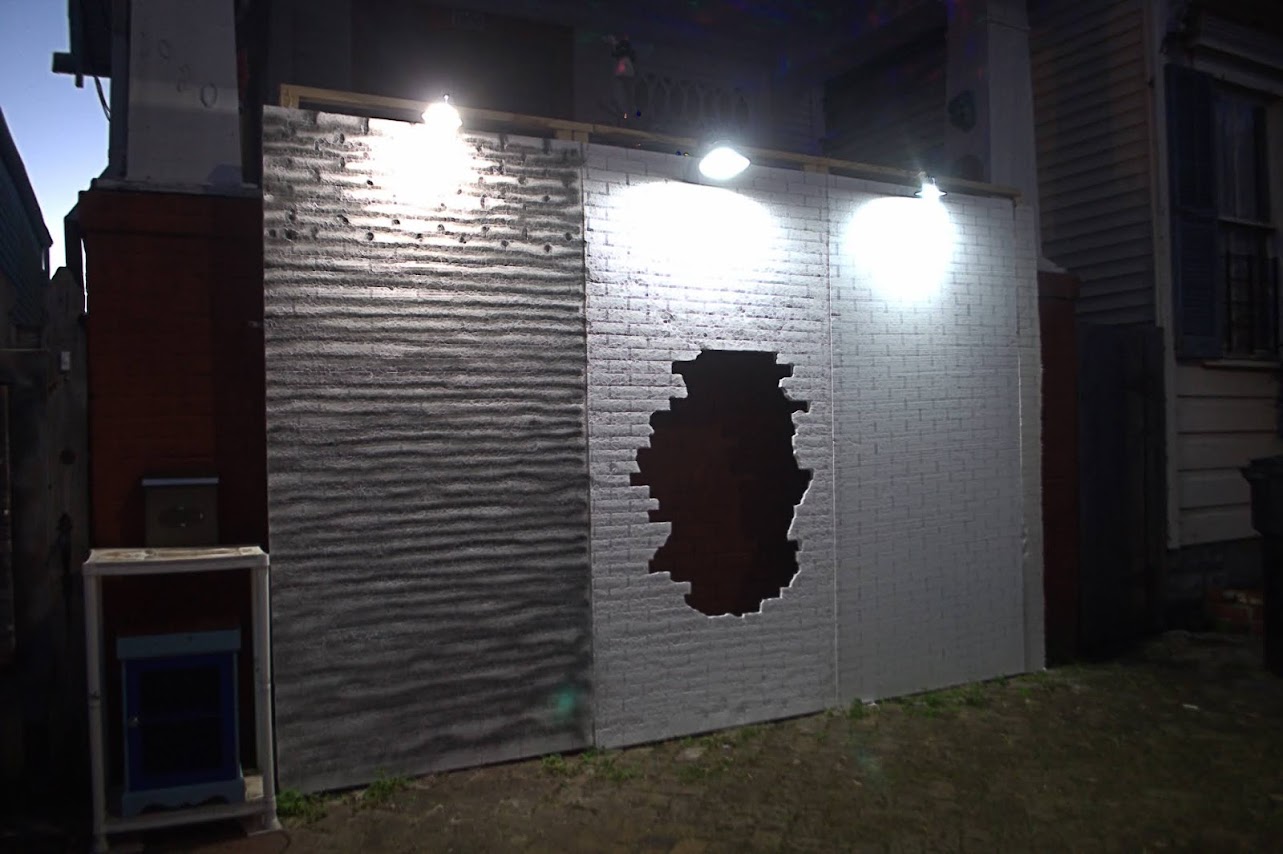 UPDATE 01/04/21
Today began the painting of the walls that were cut and melted yesterday. I could only go partway into the second panel because I need to cut the lettering first that goes on it.
The latex paint was a combination of two colors. There will be another coat that goes over it and gives the bricks an individual look. But its looking good so far. 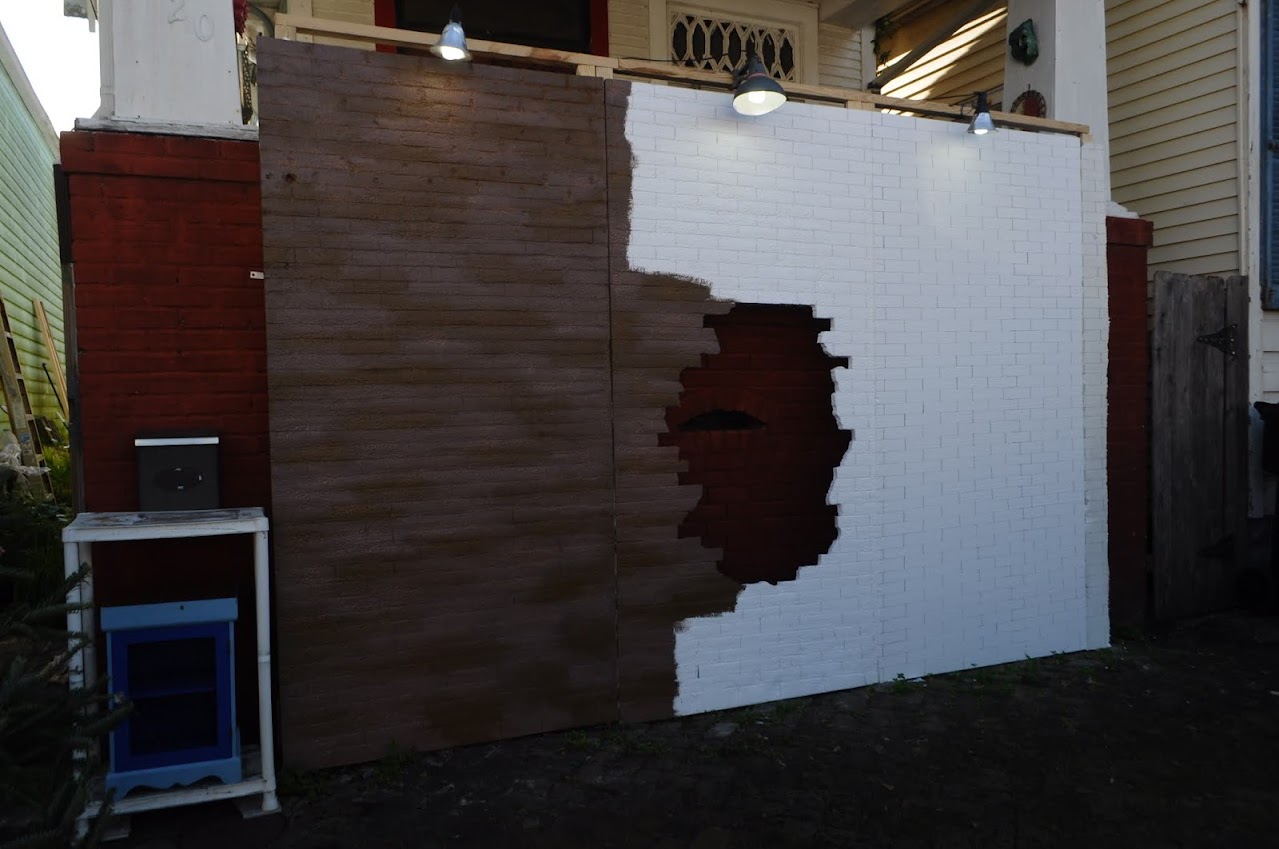 UPDATE: 01/06/21
A lot of progress today. The wall is now completed base painted. The title of the piece has been etched into the center panel and the second pipe has been added to the right side. Its really coming along nicely. I got propositioned by someone driving by to create a Mardi Gras design on his truck. But I doubt I'd have time to do so. Here are photos of the progress! 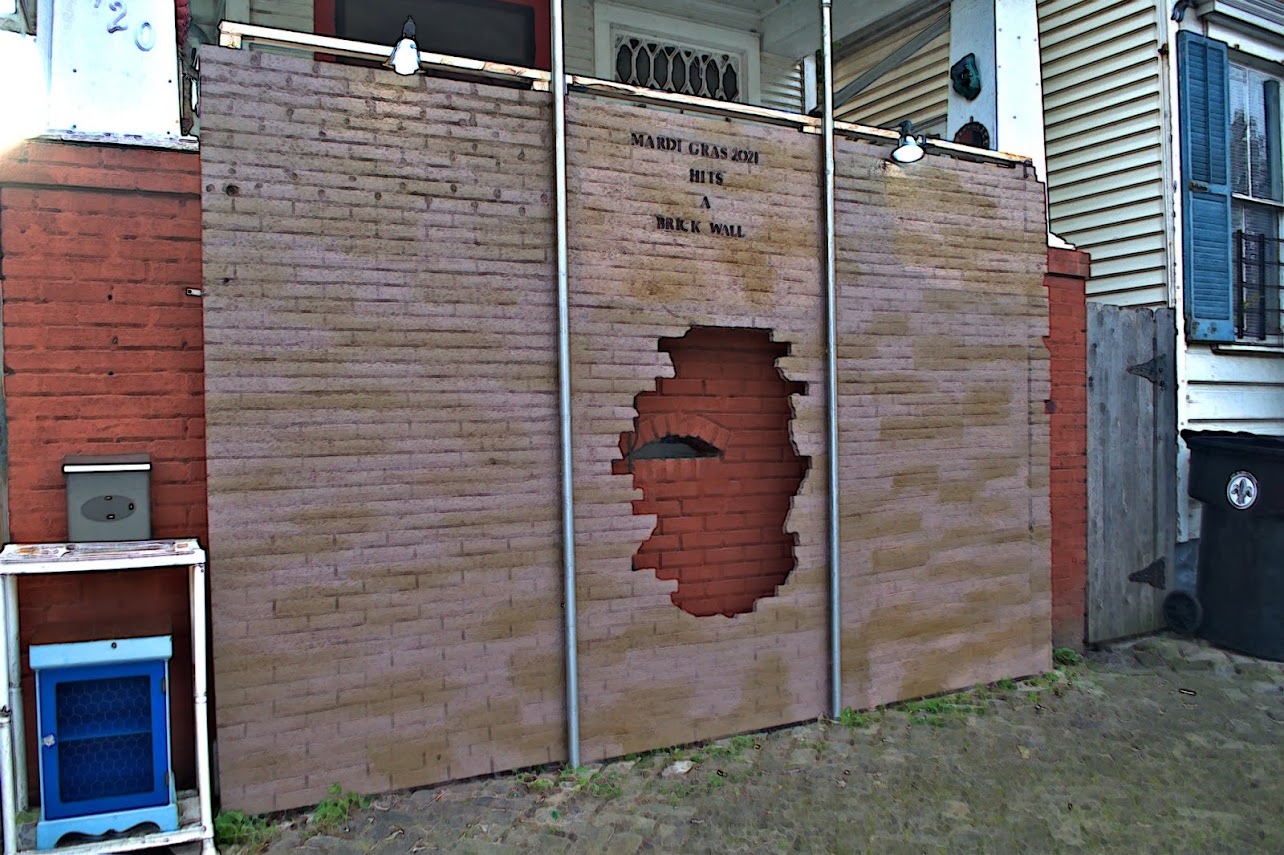 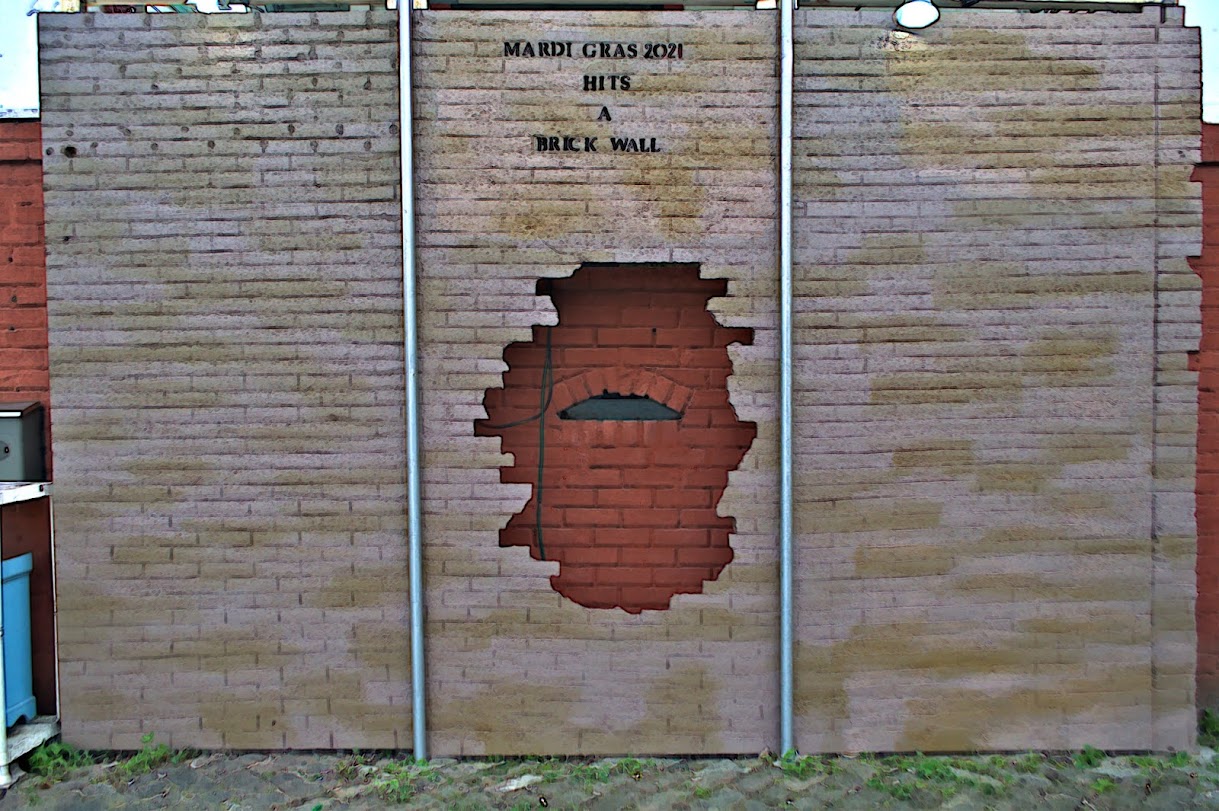 Finally after a week of extremely low temps (rare in New Orleans), I was finally able to get outside and continue the mural. I prepped a lot of the pieces ahead of time inside, so that the moment I could get moving again, I'd be ready.

As you can see their are a ton of new additions to the wall. Still won't be done for awhile, but at least it doesn't feel just a brick wall. I've had several people tell me that they thought I was finished already. So I am glad to get moving again.

The purple box on the left hand side is filled with doubloons. If someone feels around in it they'll get a treat but its high enough to keep people from looking into it. 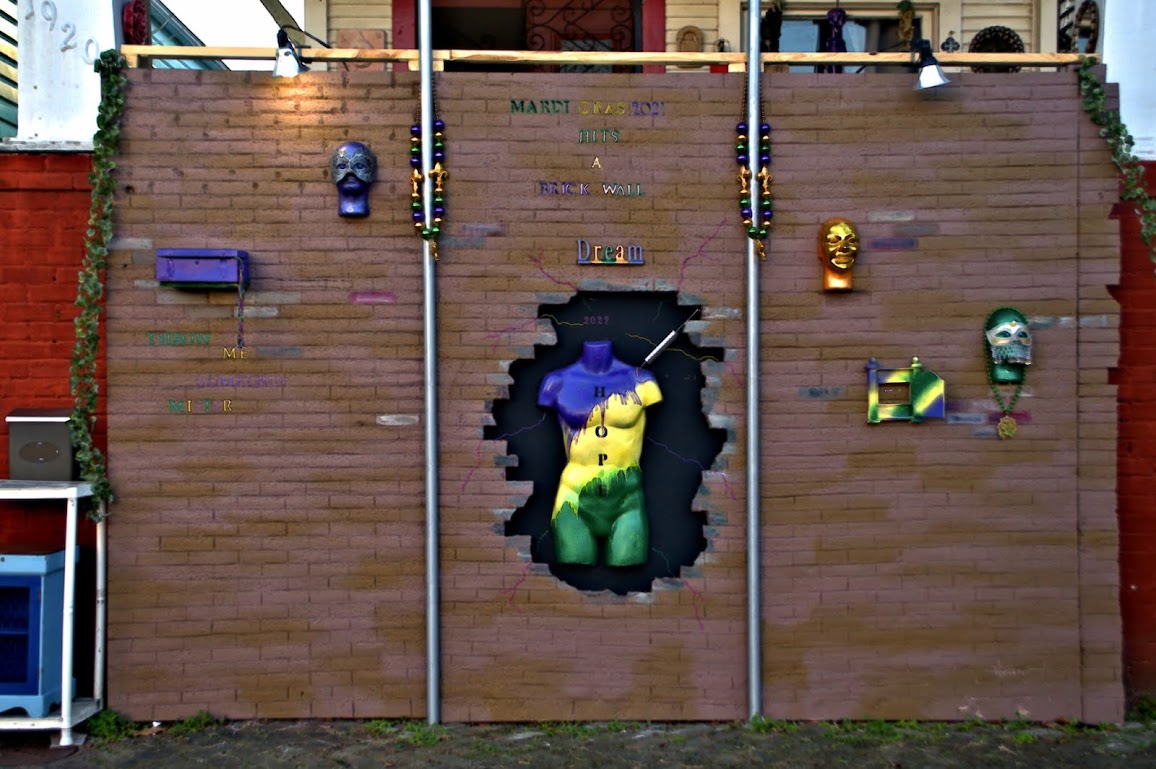 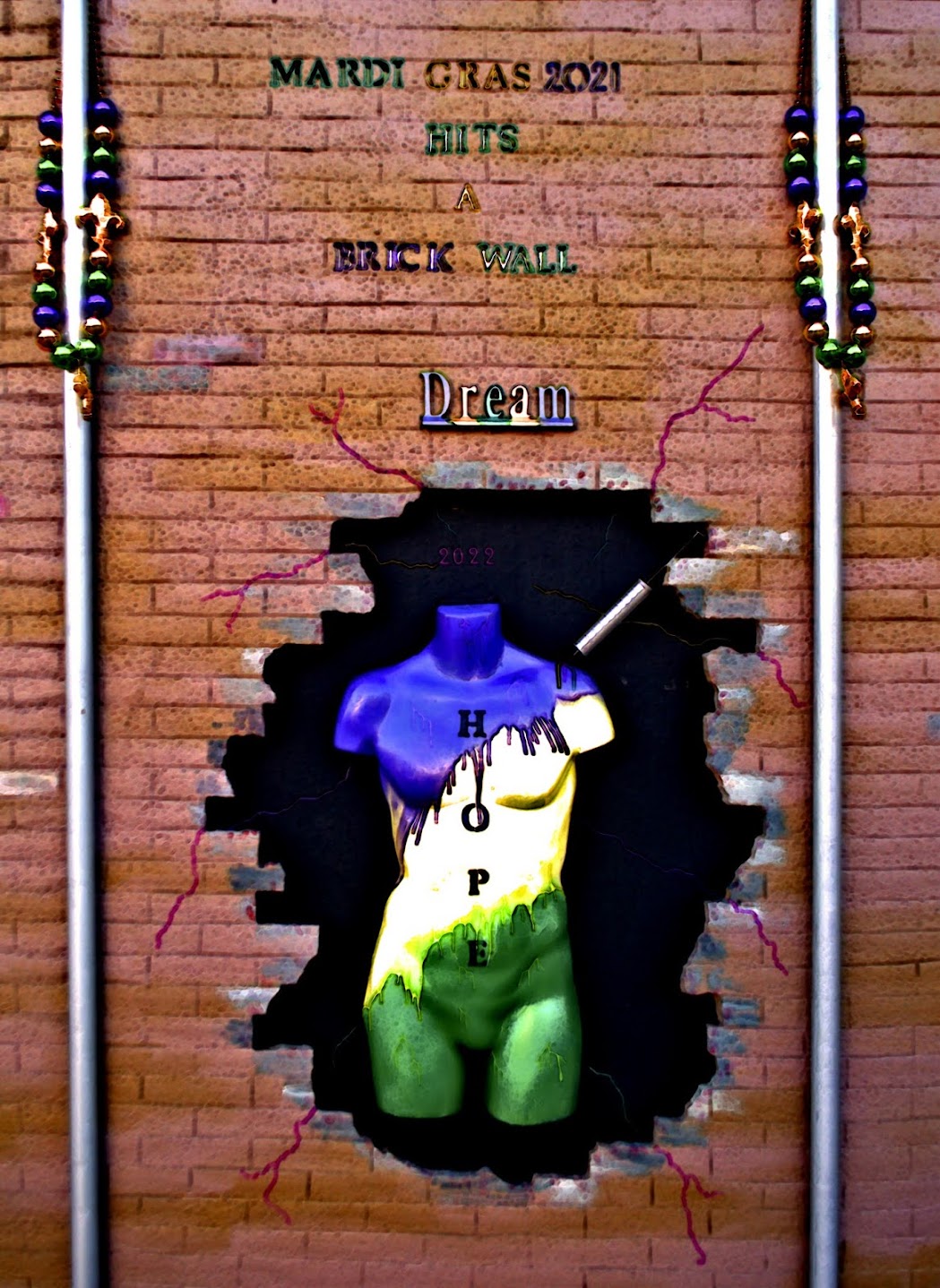 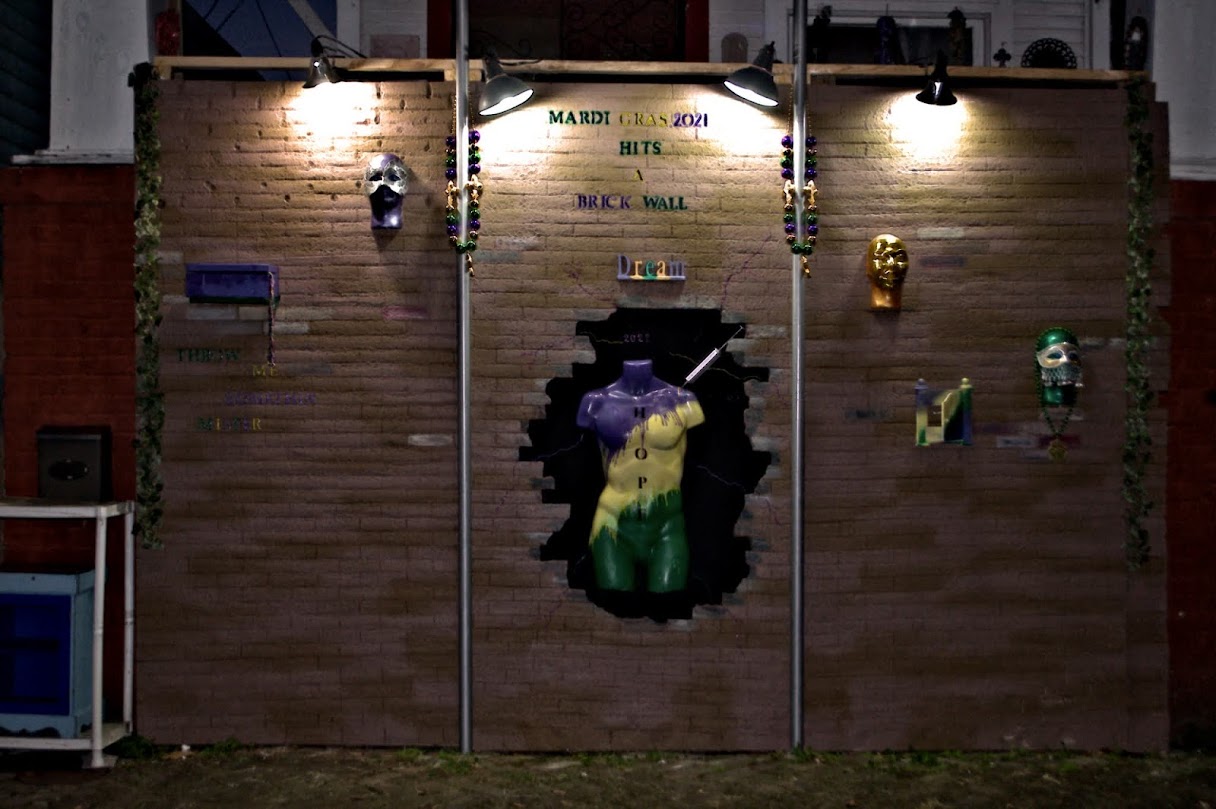