Music of the Spheres by Stan Kempton 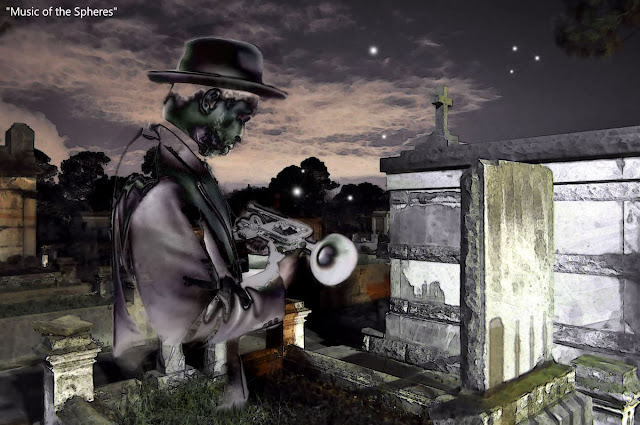 Never a cross word from you, not like it was with your brother. Oh, the temper he had, and a rebellious type to boot, put the ‘O’ in the oppressed and wore that chip on his shoulder like some horrible disfigurement. It’s a wonder he made it as long as he did. What did they use to call him?

“They called him many things.”

No, at the docks, that phrase the white foremen used when he gave them trouble.

That’s the one. But not you, a different breed you were. The kind we like to call around our little necropolis an elusive skin; always light on your feet when trouble went down, and mostly used small words so as not to stand out.

“I was never the quick-witted type.”

No, you were never that, but after seeing this fine sunset through the Live Oaks, and the long shadows that have crept between our concrete vaults, it’s time you let go, don’t you think; you’ve lingered here long enough.

“But why does it gots to be like this?”

Because, Boy, now you see in color. Is it alright I still call you ‘Boy’?

“I don’t know any different.”

Well, you should! This ain’t a place for light feet, or for that matter, a place to tolerate being called ‘Boy’, it’s a place where a metaphorical spine needs to grow along that hollowed-out seam in your back, where decisions are made—concise, intractable decisions. These colors you see are beautiful, ain’t they, but if you stay, there’s no undoing. The decision is now or never, and just staring down at that trumpet in your hands ain’t one of them. You need to bury that thing, right here in this cemetery, right now. Your trumpet can no longer do your bidding.

“It’s the only voice I know,” blowing quickly on his horn a three fingered ditty and then lowering it back as if a child, “can’t you see that mister? And now you want to make me a mute.”

You’re already mute, vocal cords snipped seven days ago. Let’s remember, shall we, not your sum, only your parts; that’s where the juice is. Went twenty-eight years under the Jim Crow umbrella, keeping ahead of the Man with your light feet and small words, lost in the music that horn breathed out until she came along one late afternoon when the blue sky was splintered in cadmium yellows on the corner of Iberville and Royal. Out of Purvis, Mississippi was where she shook loose, visiting her New Orleans cousins for the first time when she saw you haloed against that mortar and brick, your lips married to your shiny talisman, spewing a lost language that quietly tugged at her heart. You were a dead man at that moment and didn’t even know it; her blue eyes punctuated upon that white fair skin—so urgently white—and yours owning the latency of the African sun, the Congo, the whiskered veld on the Serengeti .

Maybe so, but where does love live in the world of the dead? You were the one they cornered, knife blades erect in their hands, wearing their whiskey breaths and venom, talking about teaching lessons on the mixing of blood and the breeding of mongrels. It seems the only lessons taught were the ones done to you, because the white girl with the blue eyes is still alive and you’re not. So that love you speak of, it doesn’t exist here, so set the horn down, bury the damn thing and be done with it.

You used to dream in smeared rubbings of gray—that’s how the living see—but look around at this spectrum, the dead always witness color before they go. All those dim areas made into rainbows—a brilliant hue of clarity—why do you think it’s that way? I’ll tell you why, so you can see it when it comes.

A brokered look between fear and wonderment washed through his brown eyes, especially when his mouth parted, letting out that small solitary word, “It?”

Yes, it. He, she, it, the sex is unknown, but it is the Emissary, lovingly referred to as ‘E’.

What does ‘E’ do? why unspeakable horrors is what ‘E’ does for those that stay behind.

Out in the cemetery he looked for a form, a face, those eyes. It was a strangled distortion only his imagination could concoct, watching through hooded seams of light, a creature’s creature, asking for nothing, obliged to constantly take in some corrupted impulse.

He gave his trumpet an endearing look and said, “I don’t want to be called ‘Boy’ no more.”
Ah, that’s the ticket. You’ll do fine. So hurry up and put that instrument to rest. The sun is almost down, and no one should be here when ‘E’ comes calling. No one…