One Last Day in the Sun - By Stan Kempton 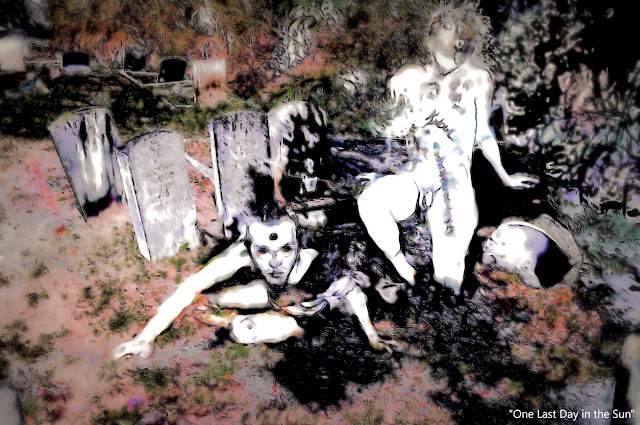 It always started with that high pitched frequency, akin to the sound of noise being murdered, or air compressed and insidiously let go with a measure of restraint. “Cut it out! We’re sleeping down here!” They never knew what caused it, or which sick bitch from Hell had such a warped sense of humor as to wake them like that, but they woke nonetheless, a view of dirt and worms, and like weeds, their fingers swarmed through the alluvial soup and sprouted into the open.

Stevie emerged first, wiggling out of earth’s tightened fist, slumping against the headstone where he absently plucked grass clippings from his genitals. The sun at the noon hour was painful, head ducking under the weight of the rays, squinting, wondering quietly when this throbbing head of his would be decapitated.

“I’m not happy,” groaned Joyce, laboriously freeing herself from her own hole and crawling to the other side of the grave where she spooned the dirt mound, languidly closing her eyes.
Stevie impulsively reached over and pinched her nipple, barking at her to, “Wake up!”

“Ouch! Goddamn you, that fucking hurt.” Joyce angrily turned over. “Leave me alone, my head’s pounding.”

“My head’s pounding, but you don’t see me crying about it.”

Stevie threw ripped grass her way, snarled in disgust and abruptly looked elsewhere. This feeling will go away and she knows it, so why does she have to play the same part, or for that matter, why does he? But they do it, don’t they? It’s the roles they’re destined to perform, but still, what if they tried to make it different?

These were some of the thoughts running through Stevie’s head, and as the throbbing in his temples subsided, he closed his eyes and placed his face directly into the sunlight. The warmth wrapped his features; the chiseled bone structure, his aquiline nose perfectly balanced between dark, mysterious eyebrows. Handsome by anyone’s standards, even Stevie wasn’t too modest as to not gaze upon his own specimen without a measure of awe. Nature had equipped him with a tightened midriff centered upon prominently flanking lats. His pecks bulged and the sinewy cordage of his thighs were only a backdrop for the perfect girth of his penis that laid there upon his leg like an elephant seal beached on the rocks.

Joyce suddenly uncoiled from her fetal position as if bothered by these very adjectives and rolled on her back. The throbbing in her head must have likewise subsided, stretching out, projecting her naked front to the gods. An equally gorgeous specimen in her own right, Joyce didn’t lack in proportionate beauty; owning large breasts with these perfectly round nipples that stood turgid like ripen cherries, a curvaceous frame of a thin waist accented with soft robust hips, the glabrous sheen of her skin where the darkened patch of her bush hid that seam in her soul he once parted every day. Remember that feeling of you inside her?

For a second he almost felt himself stiffen…almost. Instead, a herd of them walked by and he couldn’t help but gawk in pitied deference. They always roamed in large groups, wearing those goofy hats and fanny packs, taking pictures, listening to stories heavily dipped in bloviated macabre. “Hey,” nudging Joyce’s shoulder, “get a load of the stray one.”

Joyce crooned from her lounged post to stare at a woman wearing a ‘Walking Dead’ tee and a sagging tattoo on her meaty forearm, only to settle back where she had been.

“You don’t think she’s funny; trying to be hip?”

“Bitch?” suddenly sitting up and flicking his ball sac, “who’s the bitch now?”

Stevie didn’t react fast enough, her finger struck hard against the smaller of his two testicles, sending up a radiated wave of emptiness throughout his groin. It was that wave of discontent that always plagued them at this hour with Stevie squinting, clenching his fist, almost blowing apart the whole goddamn place but he took a breath instead, shook his head as if lamenting some egregious error, telling Joyce how he wanted to start over. “You think we can do something like that?”

Joyce sat up, arms rigidly straightened behind her, making those breasts project in statements of their own. “I’m sorry Stevie. This always happens to us, doesn’t it?” She smiled—feebly apologetic—then cantered her head in communal sympathy, trailing her fingers across the ground until touching his wrist. “Let’s try to be different, shall we.”

Staring into one another’s eyes, it was the moment when he thought they could change the loop, how they were going to go clean, from here on out, and stay whole and beautiful in the sun for just one last day, maybe even find that forgotten urge to lean in her direction, kiss those eyes, her elongated neck, that moistened residue in the corner of her mouth. And it was there in Joyce, that look that welcomed all of those parts of hers to be kissed, over and over, but the sun had changed. It had run its course and wanted to bury itself within the horizon, and with that, so came those other urges that obliterated hope.

It happened first to Stevie, but Joyce hardly noticed before it washed over her. Tiny black lips opened across both their bodies, pockmarked like charred craters over arms and legs, in their groin and between their toes. Tiny black lips, sucking and wanting to be fed, trailed along their dried overused veins, and with this malformation, so went their beauty. Their glabrous sun-kissed skin was pruned and took on tints of gray. His genitals shriveled from disuse, hanging like deflated sacs across his horribly scarred attenuated thighs. Joyce’s slit was a cavity of disinterest and mitigated reprisal, indifferent as to ever being parted again; it was nothing because she felt nothing, especially with what the blackened lips demanded, making Stevie and Joyce nervous, making them shift and ignore the addiction that had followed them even here. It was triggers and impulses, looking on at their gaunt faces and eyes wearing a bucolic landscape in winter.

For an hour they managed, that’s all they did, ignored and managed, but then the black lips that riddled across their skin began to whine how they needed to be fed. It was a chorus of madness, hell’s mimicry and the demon’s protocol that made them jerk themselves to their feet, made the forgetting of urgent kisses and solace in the sun mere echoes from some past life. Up from the grass they rose, thin apparitions of what they had been, sprinting through the cemetery and scaling over the wall, then running helter-skelter through the streets like unchained dogs, tongues lapping out beyond their cracked lips, their black gums and rotting teeth mere bystanders to what they sought.

Joyce was first to see the biker, pedaling under the evening canopy where she lunged across his temporal path, disrupting the inertia of his tires, making him wobble and violently smack into a parked car.

“Let me!” Stevie panted, pushing at Joyce to hover over the unconscious bloody victim.

Desperate, Stevie scanned up and down the streets. The black lips were panicked, crying and pleading to be fed. “Shut up!” he screamed, fingers clawing deep into his scalp until in the mist of low light and shadows emerged a woman walking her dog. Like a hunter hunting, Stevie crouched, eyes boring down on the prey, trailing across the street and up and around bushes and trees until crawling on all fours, contorting as he approached the little dog tethered to the leash. Stevie produced a playfully wicked grin, flicking the dog’s pointed ears, then pushing vibrations in the air that made the dog bark. It was timing and judgment on how coincidences played into patterns, and patterns were slotted into intractable collisions he liked to call, ooops. So Stevie disturbed the air around the dog, driving the poor thing crazy, making it bark, prompting the owner to tug and whisper for the creature to hush, saying, Settle down, Benji (or whatever it was called), there’s nothing there! all the while finalizing the approach of an oncoming truck, waiting just right, then running circles around the woman where the leash wrapped, not once, not twice, but three times and then there, yup, she stumbled and fell into the lane and, that’s how it’s done, ladies and gentlemen.

“It could have been worse,” whispered Stevie to the woman sprawled on the pavement. “You hit the side of the truck instead of the truck hitting you, so, you’ll live, and your little Fifi won’t be homeless after all.” He touched his fingers to his lips and licked the tips. “Now then, as you dream, you won’t mind if I take some pieces off your soul.”

As Joyce had done with the unconscious biker, so did Stevie do with the woman, boring into her gut then shoving his hand up under the rib cage to an open window just below the heart. Out he plucked a glowing sphere the size of a marble that made the colony of black lips unanimously send up a cheer.

Like rivulets of light they ran, Joyce out front, Stevie chasing at her heels. With the glowing pieces of souls clutched in their fists they scaled back over the wall and into the cemetery. Through the raised crypts and symbols, through shadows and beside names and phrases etched on granite always ignored, they went back where they had been before to wait. But Stevie and Joyce didn’t have to wait long, they never do. Out pedaled The Collector in his top hat and dapper suit. Guiding a three wheel contraption of soldered metal and broken spokes, where behind the seat a black box of goodies mysteriously sat. But they didn’t care what The Collector did with what they brought, it was a commodity to be exchanged, and exchanged they did. Parked in front of them, they gave up their glowing marbles, and in return, after the lid on the box was opened and the pieces of soul swiftly deposited within, The Collector handed them both a red needle. It literary glowed red, the liquid within, the plunger, the stem, the needle, where they sat on the grave and probed the needle’s tip for the most enthusiastic of the veins. And then they watched the world turn upside down as it had done yesterday and the day before that. How their view got wrapped within warm blankets of relief, quieting voices that had violently ran feral, only to drip under gravity’s spell and drop back into their graves’ to wait for the sun.