Rest in Peace by Stan Kempton 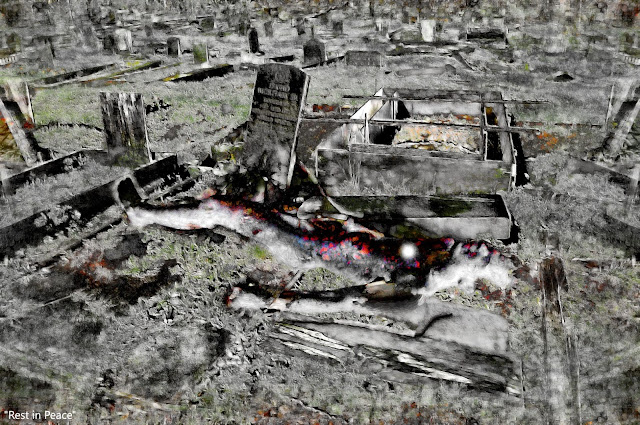 For Anthony P. Couvey…(Wait, whisper it back, will you…Anthony P. Couvey…now again, all together… Anthony P. Couvey…what a name, isn’t it, so solid and inviolable)... imagination is his business. Owning a personality of fault lines; cracks in the mantle where the fissures blindly deliver up that literary steam. It never failed old fifty-six year old Anthony P. Couvey when he parked in front of the small utilitarian desk of welded metal and reclaimed wood and placed his fingers across the typewriter’s keys that always made his sphincter tighten. It was like when the plane revved its engines on takeoff, your weight pressed into the seat, the gravity of a thousand moons laid across your chest.

It was that sort of thrill, the madness of travelling five hundred miles an hour, the panicked oblivion of the blank page, the prospects of being read by millions and millions of people for a million years that flushed his cheeks and made the hours, no, the days, whoa, the years, Wasn’t it? worth the time. As of late, Anthony P. Couvey has been on a tear—page after page—plowing the creative fields of death for…well, he doesn’t exactly remember how long death has been the subject.

Ever since that brush with the streetcar that nearly took his life, the notion of not existing has consumed him. Around him the stacks of paper sit, and behind, the shelves are proof that no crypt has been left unturned on the subject of bleached souls.

It’s a labor of committed love, to slip into the skin of those that have ceased to exist. A daily predilection of rituals; candles lit, illuminating his five-by-ten studio that owned a vaulted concrete ceiling, then breathing in the musty odors mixed with stone and mold, him sliding his chair to the edge of the metal desk, his hands raised, enthusiastically fluttering above the keys to conjure the dead’s dissociation, their dive into the dark fog, hysterical possession, glossolalia emitted from blue lips, that astral trance always searching but never finding.

But sometimes Anthony P. Couvey wishes for the simple things, like a damn window. The glass doesn’t even have to open, just a view of something, maybe a pair of trees or an open field that’s never cut. Ten foot overhead is where the only loose brick is found, and he knows, because he has pushed on every one, so with the chair as aid, he stands on tippy toes and dislodges it from the mortar. He only has a few minutes before he comes, but it’s enough for that interplay with his imagination, envisioning how he would lie down in a cemetery at night, beside a grave of some unknown man that will never be remembered and experience the trauma of death without dying.

Even imagines closing his eyes to the stars and finding a small acre of peace within this black buoyancy, but the voice comes as it always does when the brick is removed, asking, What is it you need? Has any arrived? asks Anthony P. Couvey, straining to see who spoke. Has what arrived? Anthony P. lowers his head, hand pressing to the brick wall and answers, Word from the publishers, then explaining about the hundreds of queries he had sent out two months ago that were awaiting reply.

There’s a pause from the brick’s gap, where the voice responds, There’s just one, and through the small opening slides an envelope. Anthony P. always shudders at the hand’s presence through the hole; that gray ashen tint of the skin that sloughs off layers, fingernails blackened and chewed on the tips.

One of these days you need to have that hand of yours checked out, says Anthony as he opens the letter, it’s getting worse you know. What does the letter say? asks the voice. It’s a rejection. Is it a rejection that’s personally addressed?

No…no, it-t’s the same form letter like all the others. Well, consoled the voice, maybe next time. Yeah, maybe, bemoaned Mr. Couvey, then went to his desk, gathered up twenty more query letters and shoved them through the hole.

Then the voice asks, Is there anything else you need before you put the brick back in its place? I want to be remembered, that’s what I want. There’s a snicker heard coming from behind the small opening, and buried under the snickering, the faint noise of papers being ripped into.

Oh, you’ll be remembered, says the voice, we will always remember you, Mr. C, just like all the rest, indelible.