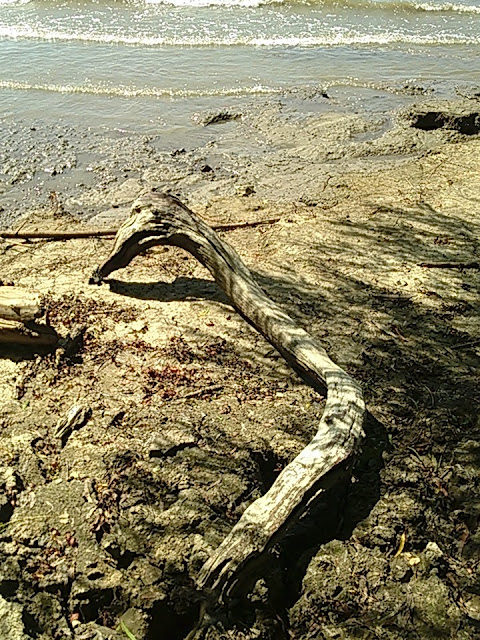 This is a beautiful example of going from object to art. The moment I saw it I saw a magnificent mastodon tusk. The problem was that it weighed a lot and it was 200 yards from the car AND at the bottom of a levee embankment.

I think I would have passed it up, but it was obvious that there was some beautiful wood beneath the gray exterior.

After much pacing and grumbling, I proceeded to hoist the thing into my arms and stagger to levee with it. Getting it up the levee was umm tedious, but I managed it. Then realized it was almost as long as the car. 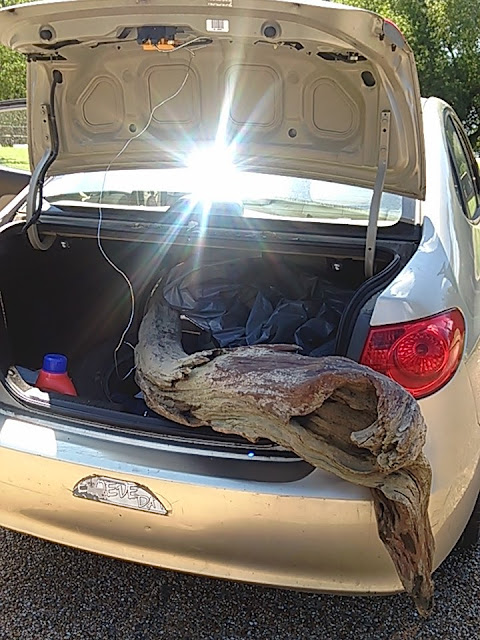 I managed to drag it kicking and screaming through to the backseat and secure it for the trip home.

My plans as of yet for it are still only partial. It was scrubbed down and washed first to verify that the color hidden beneath was complete from one end to the other. Once the grime was off of it I could get a much better idea of its potential beauty. 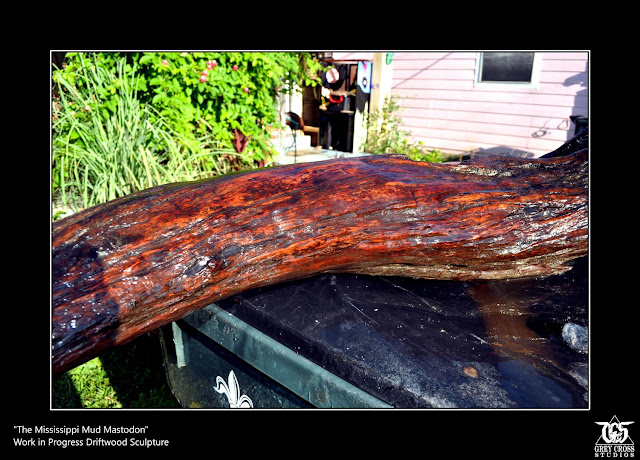 From there I am not sure. I may do some design work in the wood grain in the form of etching, or I may leave it as an abstract art piece. I'm going to let the wood speak to me before I decide its finished form. This page will contain the working notes for the project and concluding photos once done.

The piece was moved to a resting position where it can be worked on more easily. Its not the optimum arrangement and will probably be moved again, but this at least allows it a safe location for the night. 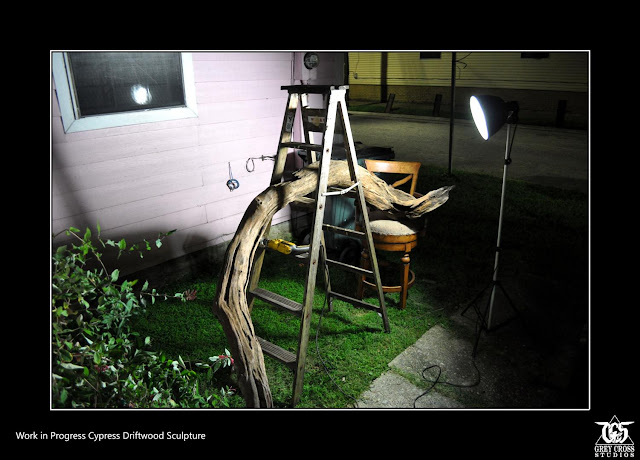 We moved the piece today to a new temporary home cradled upright in a web of heavy wire. This will give it more protection from the elements while its being worked on and allow for easier access to tools and lighting than out in the studio yard would provide. Also having it upright makes it easier to work on. 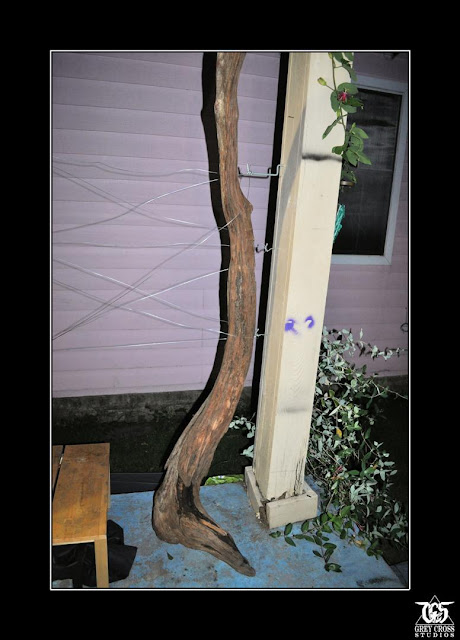 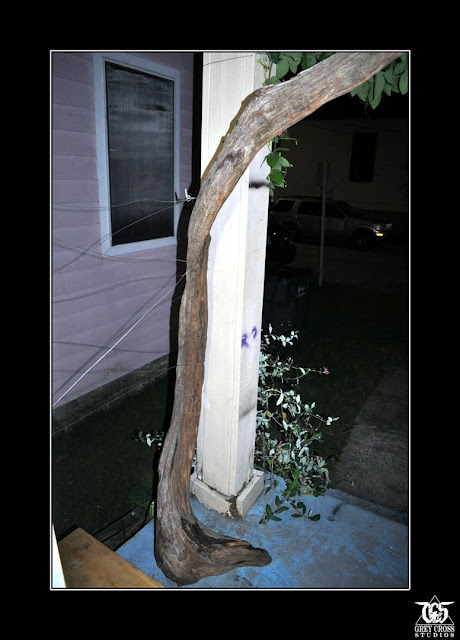 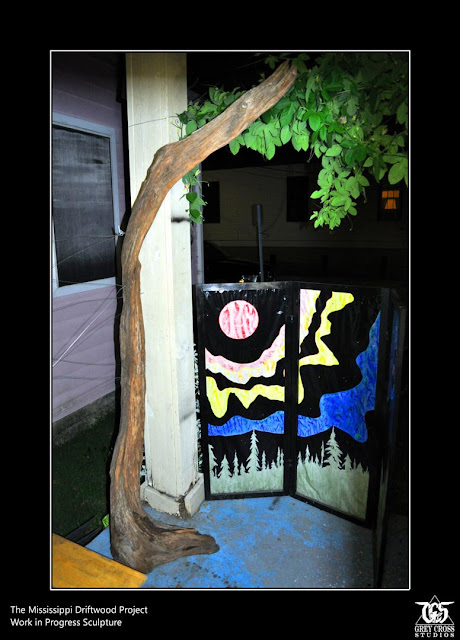 I've been working on various ideas for what to do with the piece of wood once its finished. It could stand alone as a sculpture but it seems incomplete to me. So I've been examining various ideas that include the suspension of cut glass balls on wire, the use of metal bars to create a giant wind chime out of it and about a dozen other ideas. Part of the challenge is finding a way to compliment the wood but not cause it any damage.

So the piece has been sitting in its cradle on the front porch while I work on it. Tonight I began the process of converting the porch to support a pop up gallery in the coming weeks. One of the items thats been hanging for the past year is a sculpture I created using a triangular frame with a wire center that used railroad spikes and a beautiful old barn pulley (see it here).

In order to make space this sculpture was taken down and I had set it in a corner of the porch until I could decide where to put it. Coincidentally I set it right next to the driftwood cradle and suddenly realized that it would make a kick as piece extended off the end of the driftwood.

It solves several problems. First it creates no damage to the wood as it would be hung from the very end of the piece. Second it is large enough that it doesn't get lost by the huge piece of driftwood.

So I hung it to see what I got. 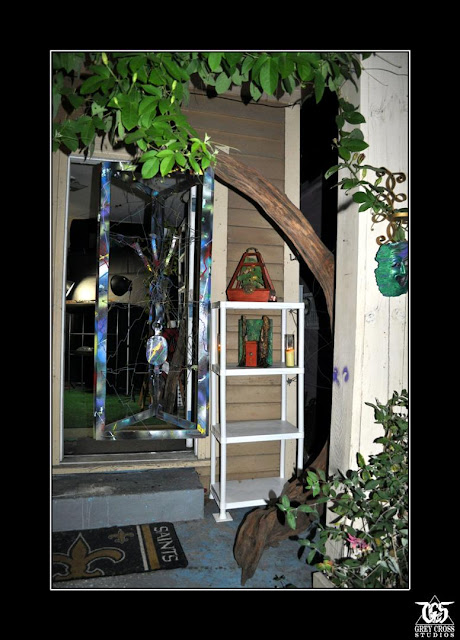 Unfortunately the angle is bad to get a good photo of it due to the limited space, but I absolutely fell in love with the symmetry of it. This has been what the piece needed I think. I may change my mind in the light of day, but right now I think this is what was needed. The sculpture will have to be repainted most likely to that its color scheme compliments the natural rust red that the driftwood will eventually be. But that is a simple thing. So I think I am well on my way to creating something truly unique with this 200 pound monster.

Due to some other projects I had to delay this piece for about 6 weeks. I've moved it inside now, finished its sanding down and scrubbed it with a steel brush in the nooks and cranny's. I've just completed its second coat of varnish as seen here. You can see how the reds in the wood are really coming out now. 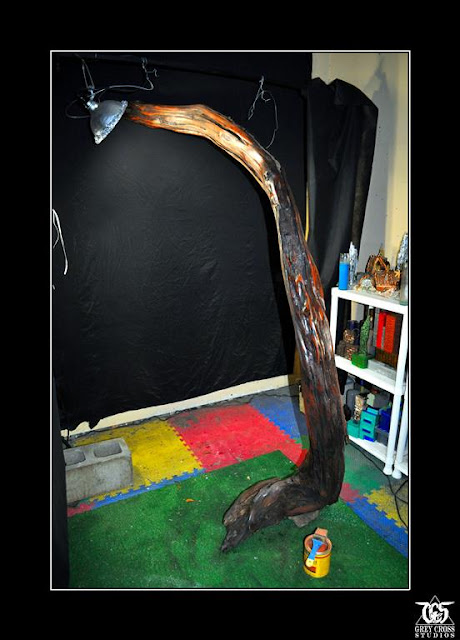 After three coats of polyurethane the real color of the wood can be seen. It will take several more coats to get it perfect and then I'll use the buffer to make sure the whole thing shines. 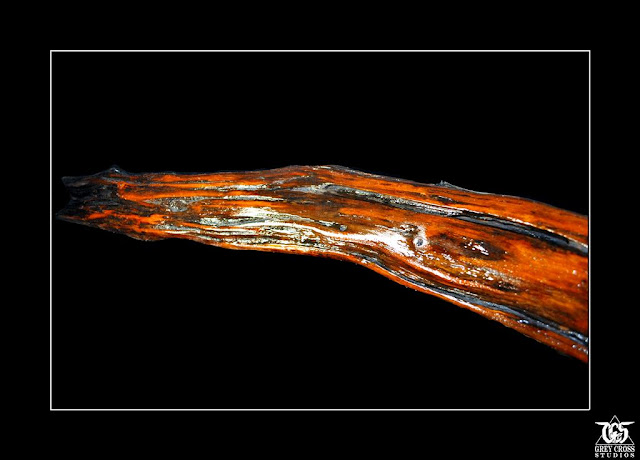 Here I've brought the piece back outside for its final coats of polyurethane. At this stage it has 6 coats on it. I want to make sure its sealed very well so it doesn't rot or lose its color. Once this final coat dries then I will begin the final buffing. 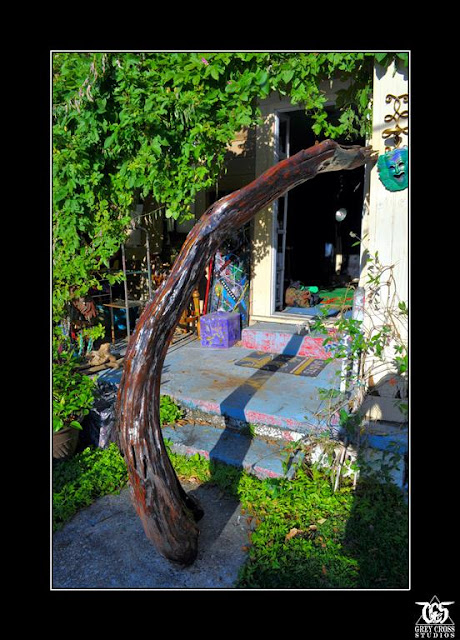 A first look at the two parts of the sculpture finally brought together. The hanging section is far from ready yet. There are other colors to add, but its nice to see what it will potentially look like when complete. 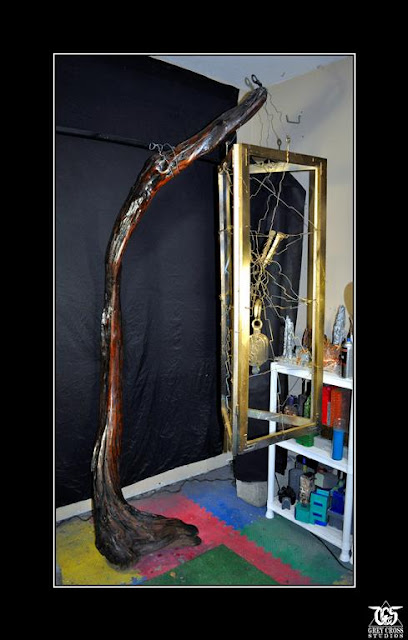 Here I'm beginning the final detailing on the hanging triangle. I've added two golds to it and a silver. Copper and a few other complimentary metallics will be added last. 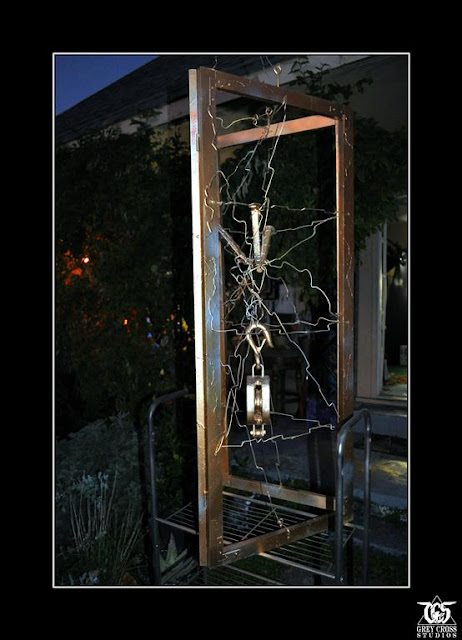 First note that the piece now has a rather odd name. As of today its official name is "The Assurian Matrix". This directly connects it to the Revenant Cycle and makes it a true piece of Assimilation Art. This piece is also officially designated as an OCTAS piece and is related to several other projects currently in the works.

For the moment the piece has been relocated outside to stand near the door to the studio until its final rendering in cement to make it stand independently. Once that is completed the piece will be moved to its home in the garden until such time as it might be sold. 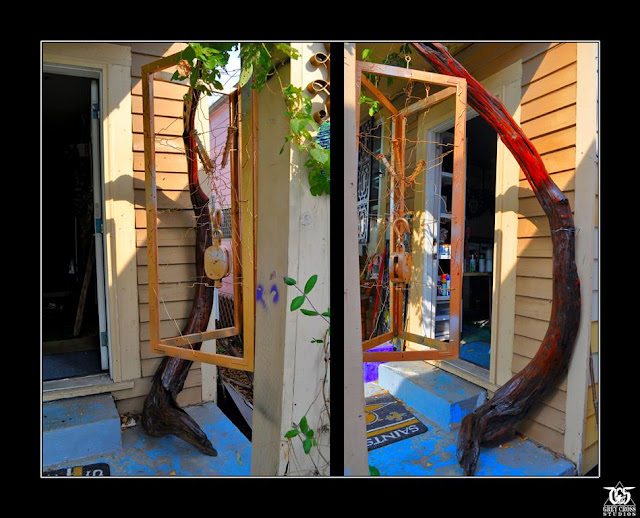 So the final hours of the sculptures construction were fraught with complications. First I decided at the last moment that the triangular hanging portion did work all in gold. So it was brought into the studio, black based then repainted in a blend of 8 metallics. After setting the driftwood into its new base, it promptly ripped out of it just before I was ready to merge the triangle with the driftwood. After going out an buying a deeper and more sturdy base and more mortar, it was recast into the new base which fit it perfectly. Then it began to rain. So I covered it over and waited out the weather impatiently until today. So in the overcast afternoon I was finally able to merge the two parts together. The final stage will come tonight when its lit. 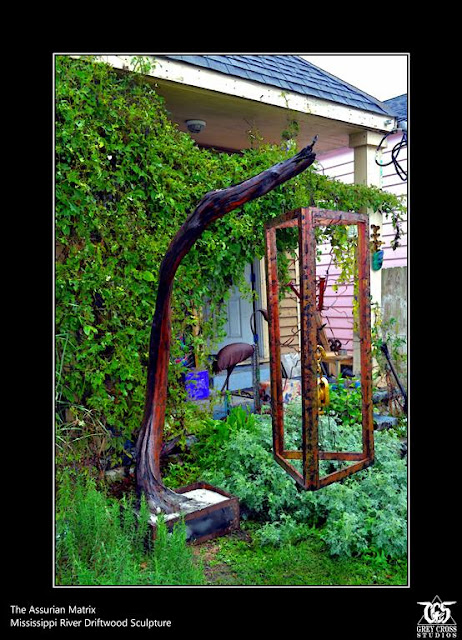 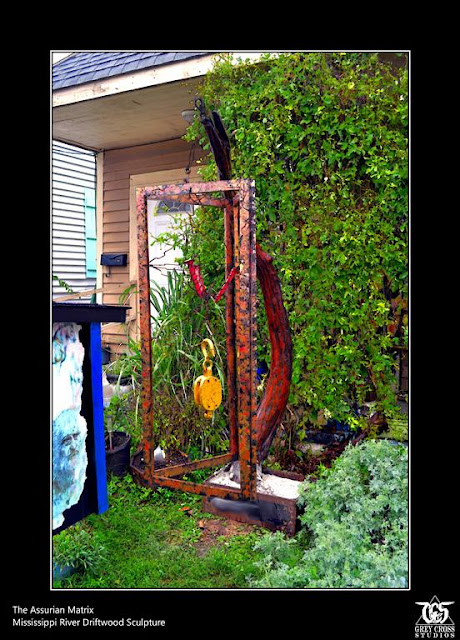