The Complexities of the Winter Fortress

The state or quality of being complex; intricacy

Now why would he want to make a list of all the things that went wrong with his art? Well first Its a memory issue. If I put down in words all the complications of a particular piece of art, then it will help me remember the facts later and maybe save myself some headaches. Second, there may just be some small tidbit of information that helps another artist or spurs on a new idea or concept that someone can use. So with that in mind, her are all the problems that have occurred with the Winter Fortress sculpture.

The Winter Fortress has been the most in depth project I've ever  created. This is a hanging sculpture built in the shape of an octagon. It represents a massive mountain fortress buried in ice and snow. 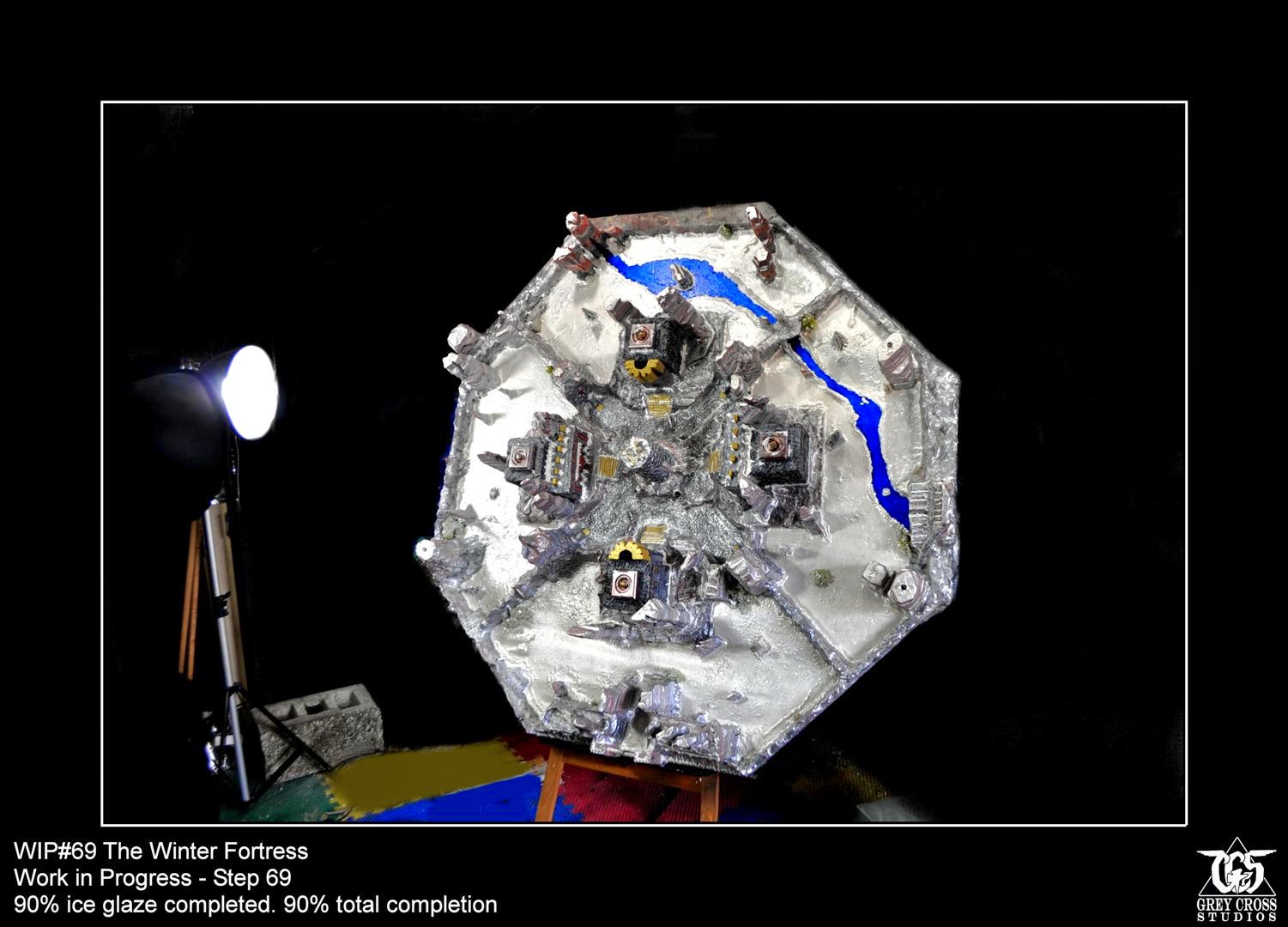 The biggest complication was the frame itself. Laying it out with the proper dimensions was difficult enough, but once all was in place, and the canvas itself was added, there was a tightening of the whole structure which warped the frame so it was no longer perfect on all eight sides. Now my partner kept telling me that he couldn't see a great deal of difference, but as the project developed I felt it was growing worse and needed to be dealt with. Serious thought went into how to fix it because I'd be damned if I was going to scrap the whole thing because of it.

So I decided to add to the frame in three sections by extending out additional 2 foot boards at a sharper angle to compensate. As shown here the board was canted out and then the empty space between the board and original frame was filled with dry foam that was epoxied into the space. The board itself was screwed into the original frame at both ends to keep it tight and adhered to the whole structure. 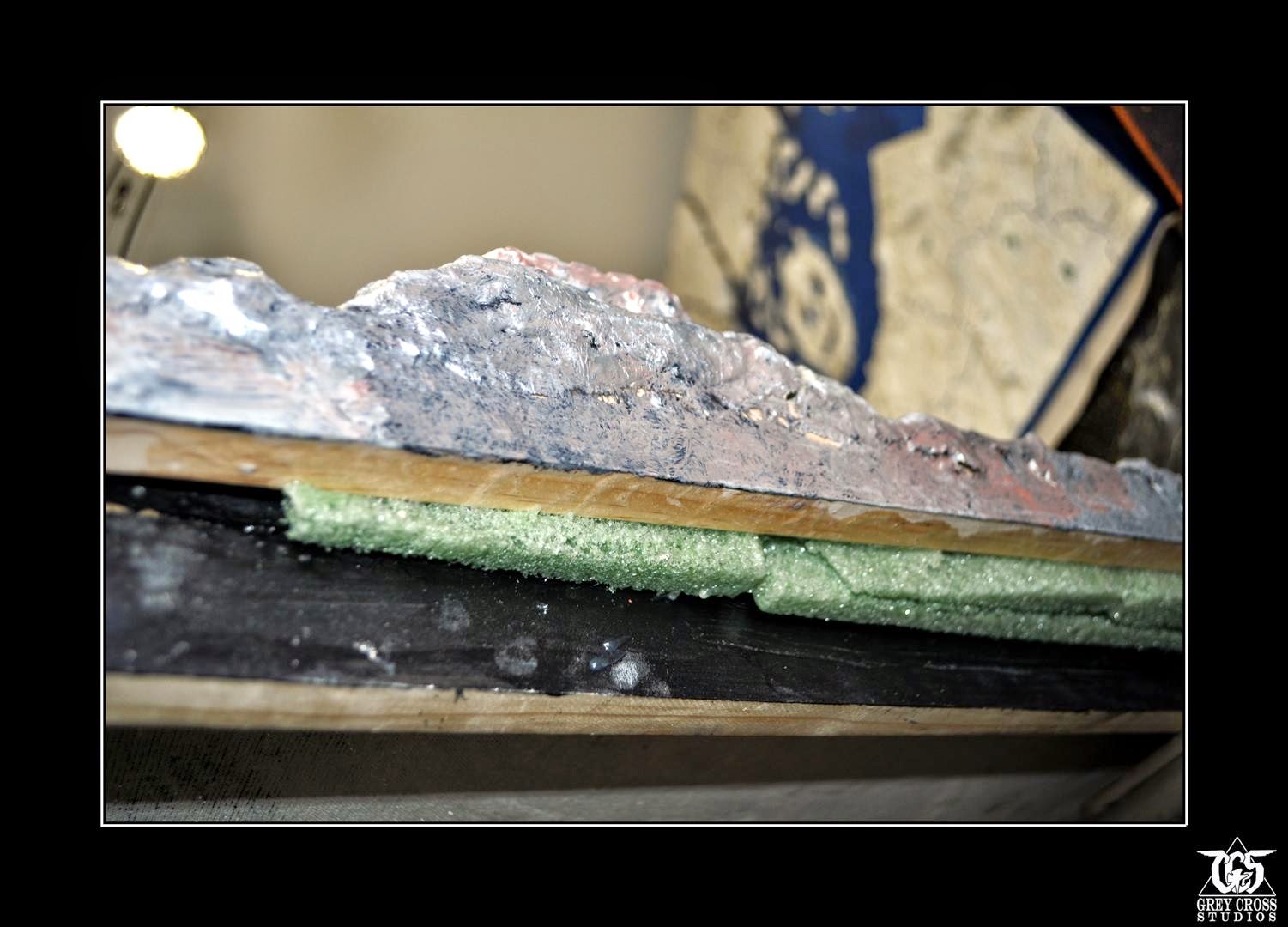 The board was then reclayed to match the original structure above, thus hiding the change. 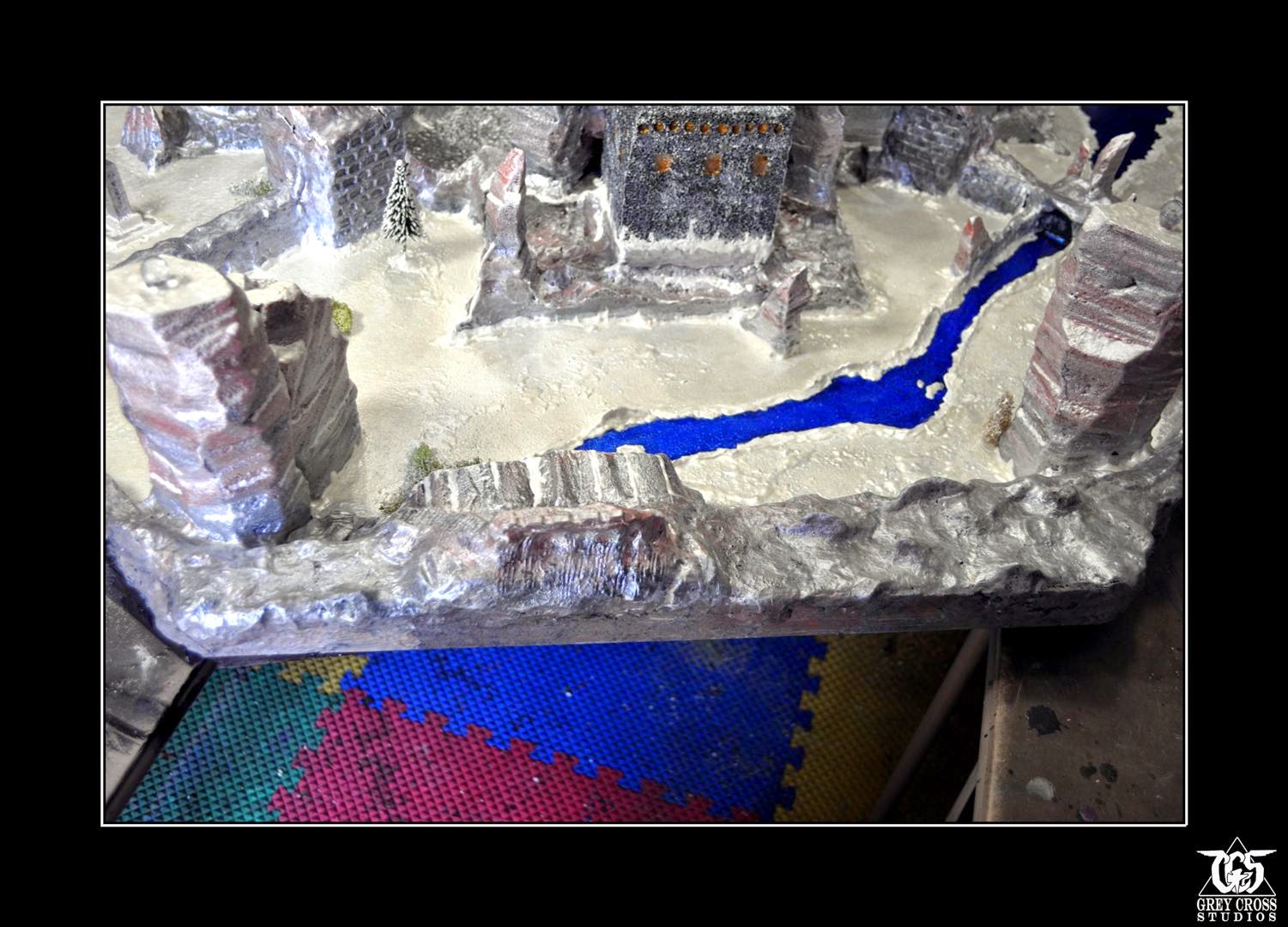 The result was a more exact octagon shape. This complex problem took weeks to solve though but taught me a lot about structure. Since it was my first octagon frame I knew there would be complications that can now be compensated in future frames.

Another problem was the weight of the completed piece. I've worked on heavy projects before, but if I wanted to do this to my specifications, the weight of amount of clay it would have taken would have been well over 150 pounds. Coincidentally I purchased a small Dremel tool and wanted to experiment with it. I found that by using dry foam and carving it into the intricate shapes of standing stones with the Dremel, I could reduce the weight in a significant way. The foam was light, easy to work with and so much better to work with than regular styrofoam was. You can see here an uncarved piece of foam next to finished carved and painted pieces. 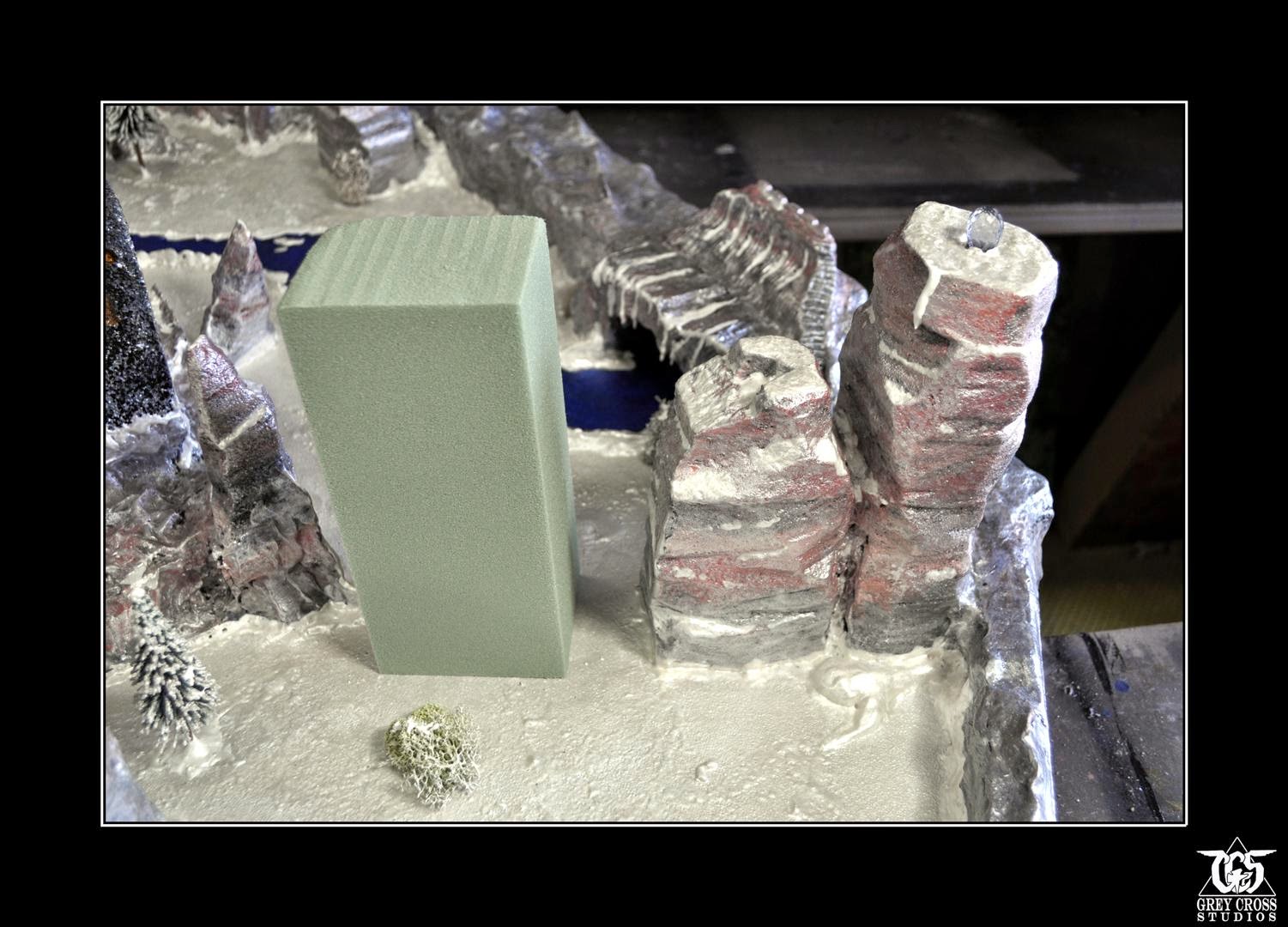 The risk of dry foam is that it chips easily. So you have to work patiently with it. Once its epoxied to the canvas it is then coated with a sealant to maintain its integrity. A finished rock is actually covered several times. First in the initial sealing, then a base coat of black paint. Then the final colors are painted on and then another coat of gloss sealant goes over that. The final stones are solid but still very light.

With the weight compensated for I could then use clay to create the finer details. Now mind you, this piece is still heavy, weighing around 40 pounds. There is actually about 70 pounds of clay still on it, but once that dries, its less than half its original weight. But 40 is a lot better than 150. I'll keep working on ways to compensate for weight on future pieces. The original frame had support struts added behind it to distribute the weight properly and also to not put undue stress on the canvas itself. The canvas is actually four seperate pieces divided into quarters so that no portion of the canvas would effect any other. The canvas was not only stapled to the frame but epoxied also to keep it tight.

Yet another problem was the depth of the piece. I had planned for the various protrusions to not extend out any further than 12 inches. That included the depth of the frame itself. With only a few minor exceptions I was able to stay to this 12 inch rule. But in a 2 dimensional painting, these are never issues that are confronted. In a sculpture, its also not usually an issue as a sculpture can be as high and wide as the artists conceives. But on a sculpture that is meant to hang on a wall, its a serious consideration to make sure it doesn't stick out too far and become and obstacle to the room its in.

Fragility is also another consideration. I make my pieces to be touched. I want the viewer to reach out and feel the sculpture. But with this piece, there are definitely aspects of it that are more fragile. Some of the smaller standing stones are solid to the canvas, but can be bumped or ripped off with a heavy enough blow to them. In fact I've ripped the tops off two of the standing stones myself while working on it. So I've compensated for this by making sure that not only is ache aspect of the sculpture adhered tightly to the canvas, but additional clay supports around the bases were added and some pieces were locked to others with a variety of glues to make sure that very little on it is freestanding.

Various stress tests are done throughout the creation of the sculpture to make sure that the canvas is holding steady and that every single part does not eventually begin to sag. This can be a serious problem if all of a sudden the whole structure begins to droop. I've done enough of these at this point though that I can usually tell ahead of time whether there is a risk of sagging and compensate during the building. Will the piece still be in tact after 100 years? Only time will tell.

The last problem was the center tower. This was created by taking a circular shaped piece of foam and circling it with pressed clay that was then embossed with a brick pattern. This tower sits at the very center of the support struts so its in the best possible place. Unfortunately when all was said and done though, even after drying, the tower was still very heavy. I knew that once the piece was turned vertical, that this tower would never hold up and would at some point begin to sag. Two techniques were used to fix the problem. First, the canvas itself was epoxied at the center to the support struts. Second the whole tower was surrounded at the lower levels not with clay, which could potentially break, but with grout which once dry would be as solid as rock and support the tower itself. Here is where I wish I'd studied math better when I was young, because I am sure there is some formula I could have used to figure out the ratio of the tower height to the support base length, but I used my eye and past experience and created a very solid base. I dont think that tower will EVER go anyplace now. 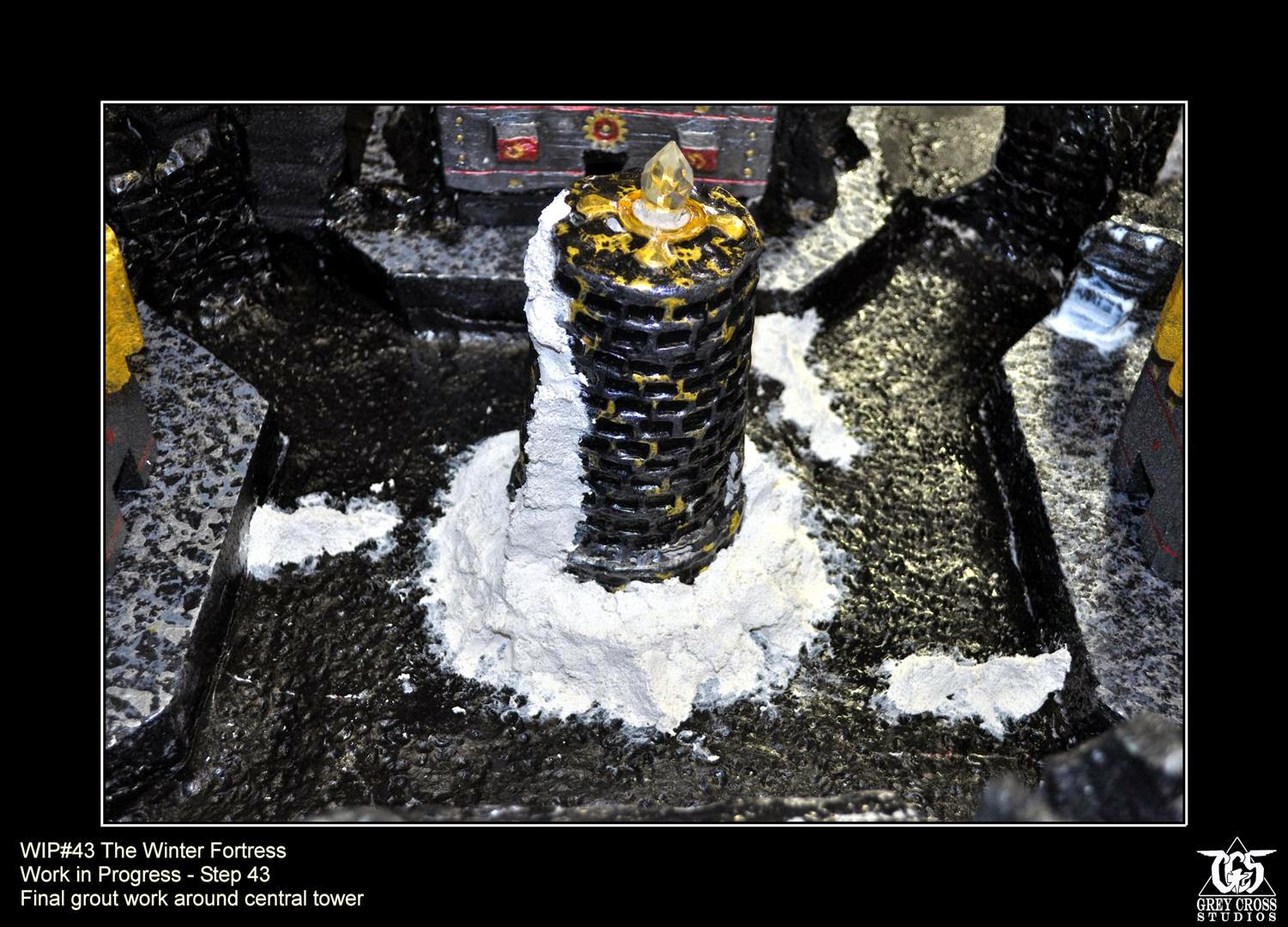 You can see how I ran the grout up the tower in places to help with the support. After painting, the final tower was just what I wanted. 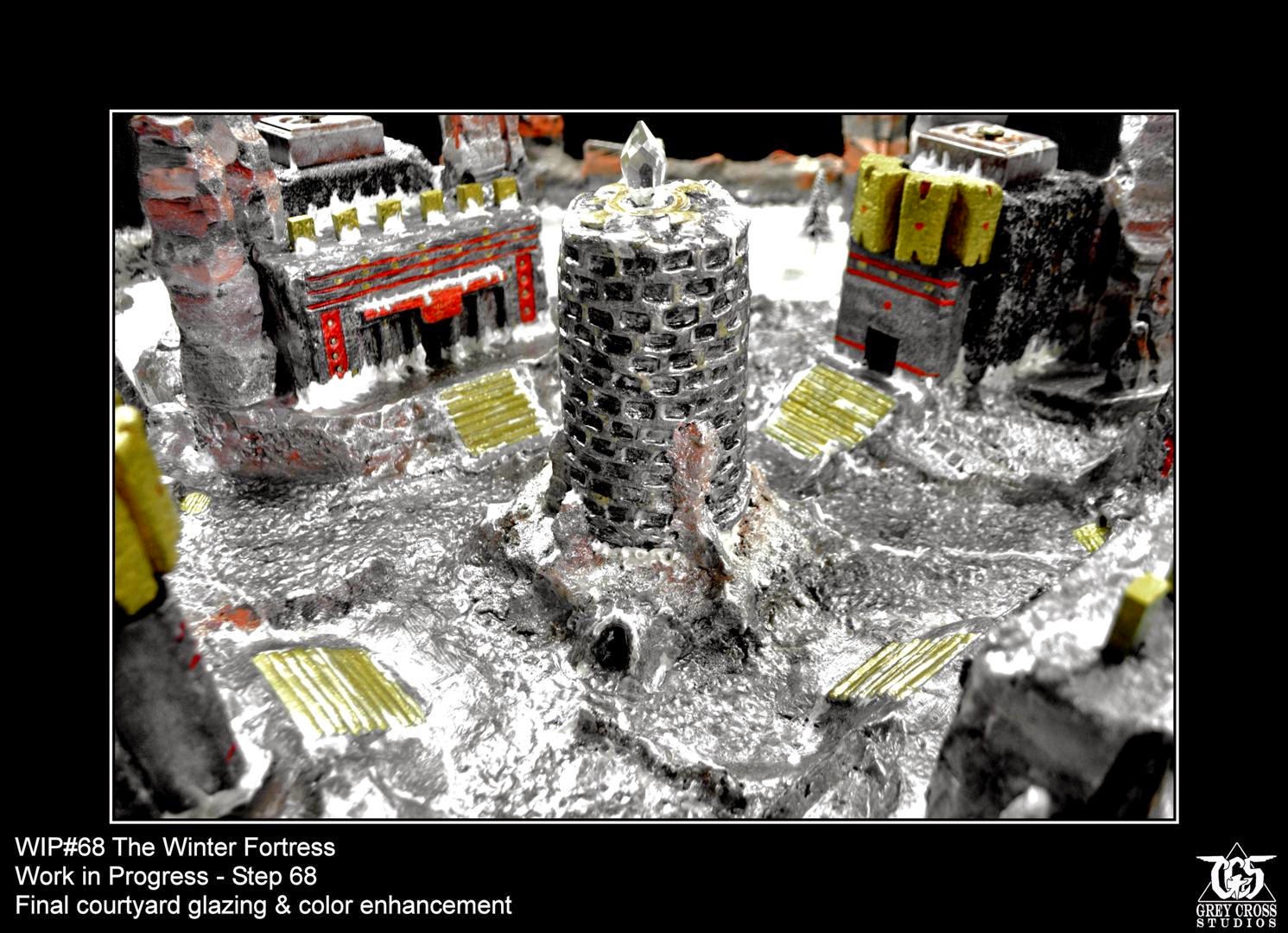 The last complication was the frame itself. I felt that the frame seemed out of place somehow just painted black. I wanted it to blend the frame to be part of the composition in a way that I hadn't ever done before. On a squared frame just a single neutral color seems fine, but on an octagon, I felt it needed something more complex.

So using my Dremel again to create rifts in the wood of the frame and then adding gorilla glue in strips and letting it foam and dry, I create a more three dimensional frame that I then painted the same colors as the rock. And this was the final result 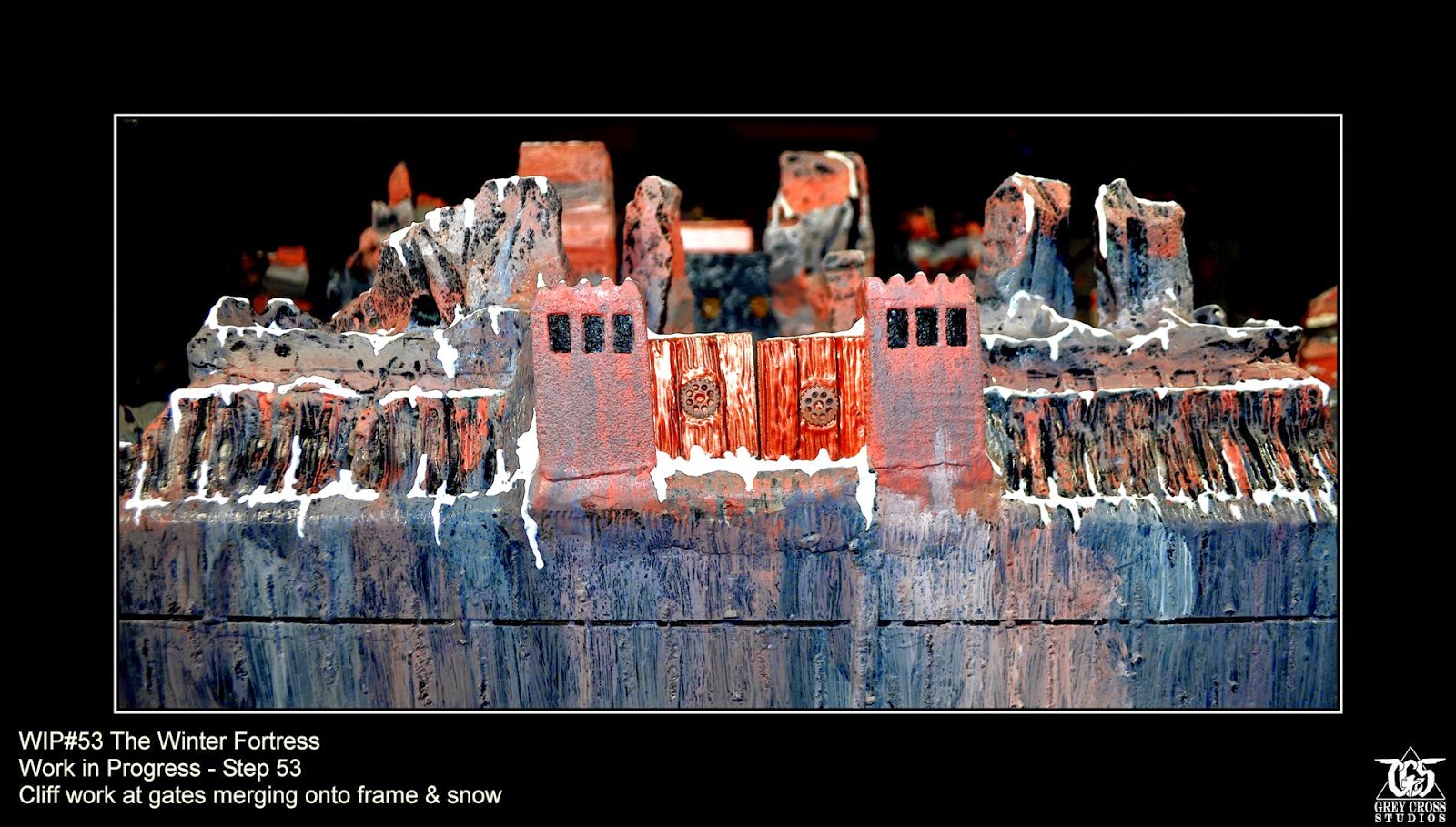 The Winter Fortress is finally nearing completion. With 262 hours worth of work so far, I hope in the next 5-10 to be done with it and write its base descriptions and photograph it to be added to my portfolio.