Mark of the Beast

As some of you know, I've been working on a huge new piece for almost 2 months now. I've been reticent to do more than show updated views on twitter, with little to no explanation of its meaning. But since I am getting more and more questions about it, I suppose its time to start to put some of its information up.

The canvas is 8 feet high by 4 feet across and is created to be hung on a wall, not laid flat. 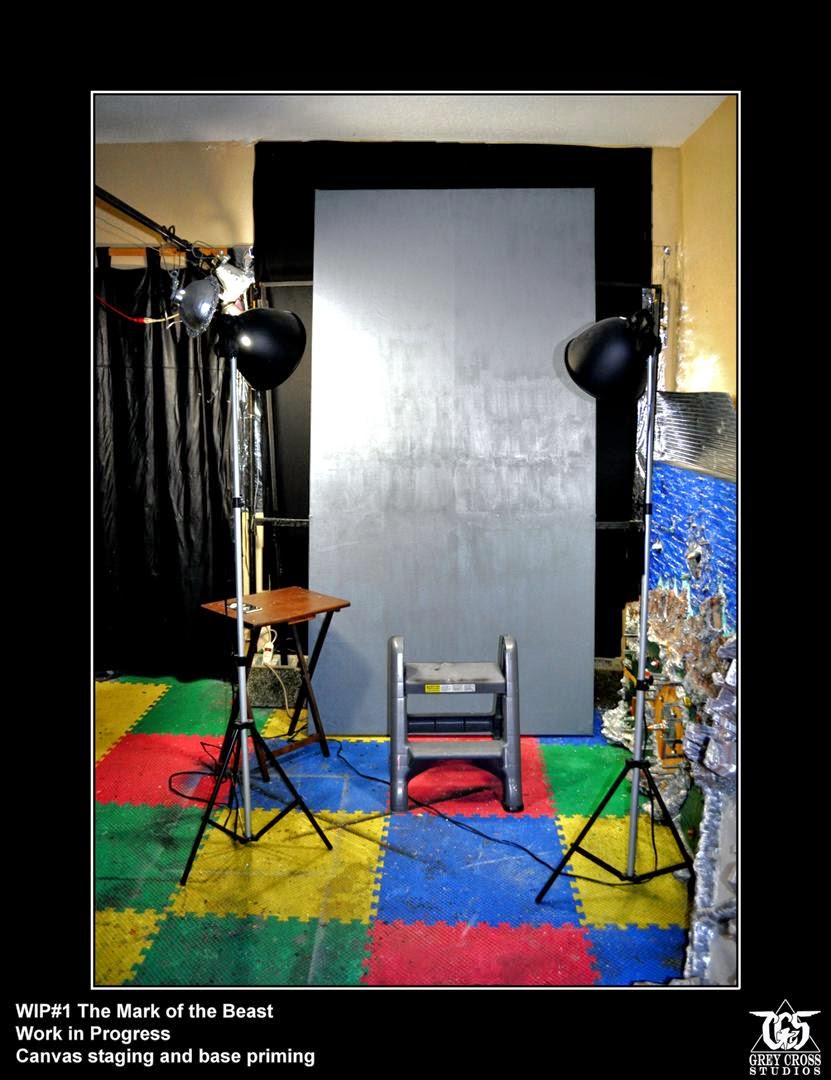 The frame was hand built by me and is 3 inches deep. It is supported by a framework of support struts to keep the canvas from sagging.

Six different types of glues and epoxies are used to make sure that nothing can fall off over the long term.

The streets and cross were laid in first to create the grid pattern for the structures later to come. A raised highway was added right at the start to cover over a design flaw in the canvas. 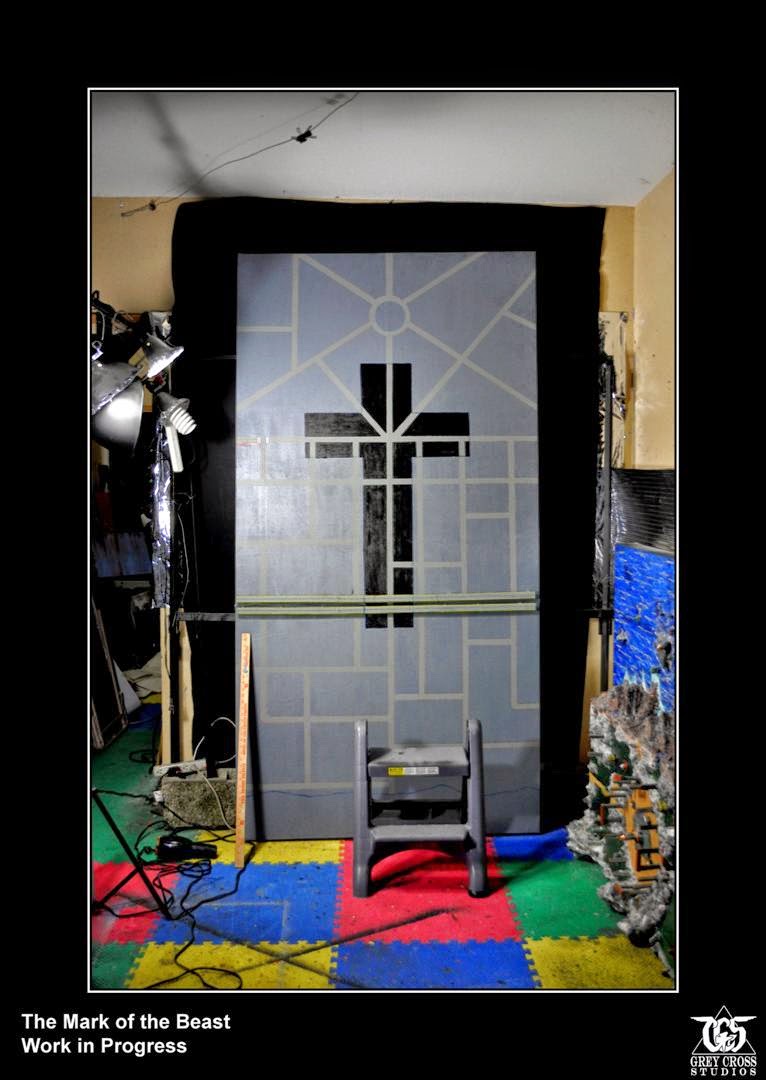 Each individual structure is a full days job to complete before being added to the whole.

The daily design process begins early in the day and includes approximately 5-8 different steps before its ready to be epoxied to the canvas around 4am each night.

There are currently 61 structures finished with approximately 40 more to be sculpted.

The total weight of the piece is only about 20 pounds currently as almost 90% of the sculpture is made from dry foam. Its still easily movable by myself alone although awkward as hell because of its height.

The construction pit is the most unique structure on the canvas. In order to create it, part of the canvas was cut away opening a 5 inch wide circle which a light weight plastic  bowl was epoxied beneath the 3" frame. The bowl was then filled with wet layered terry cloth soaked in a glue substance. The cloth simulated piles of sand around the construction pit and was then covered in rust covered sand which dried and adhered to the surface of the cloth. In the pit itself, marble tile was used to simulate construction girders, completing the illusion of a building under construction. 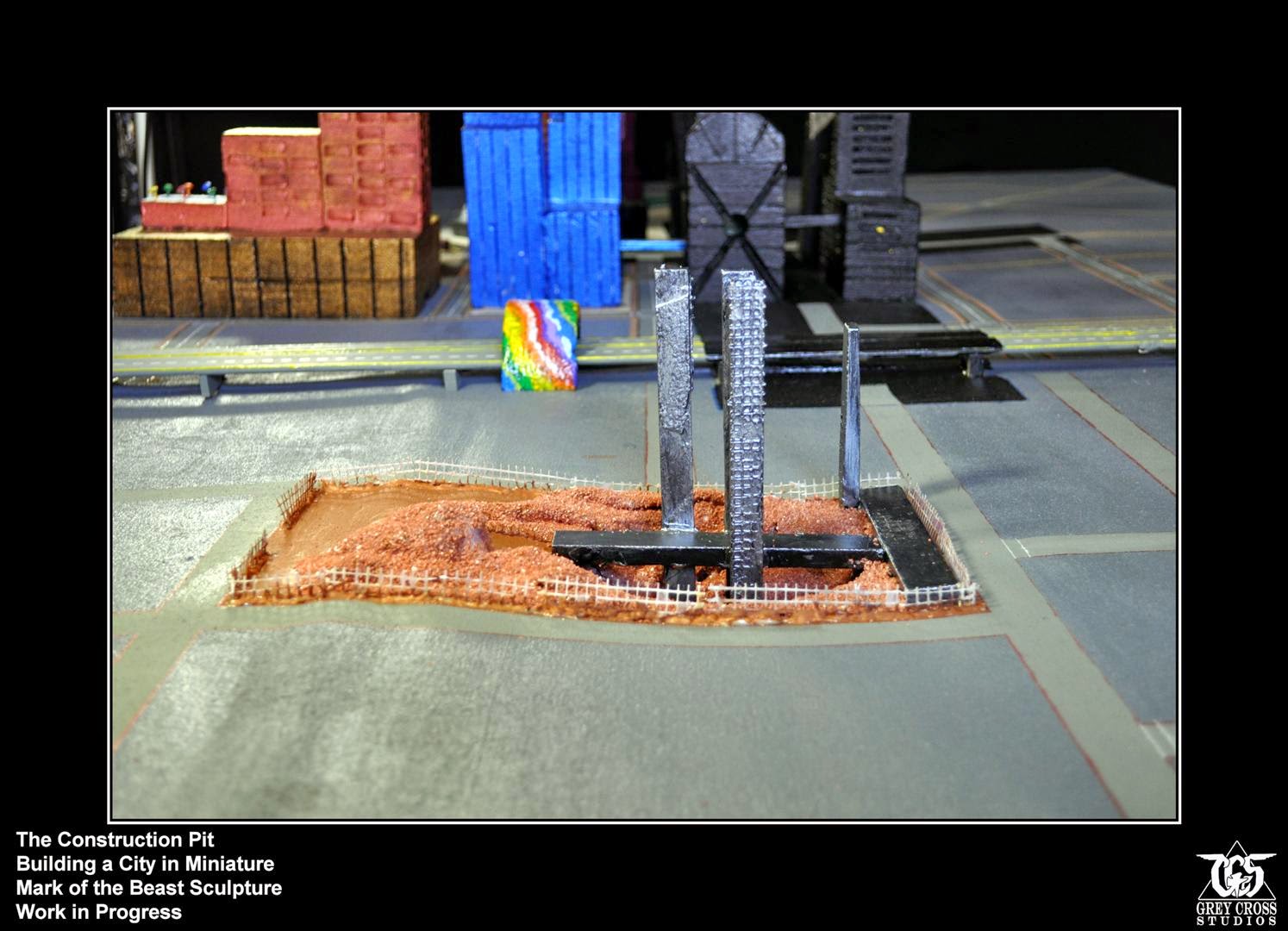 Other unique structures include two towers. The first is a satellite tower, the second a radio tower. Both were made from cast off scraps from other projects. 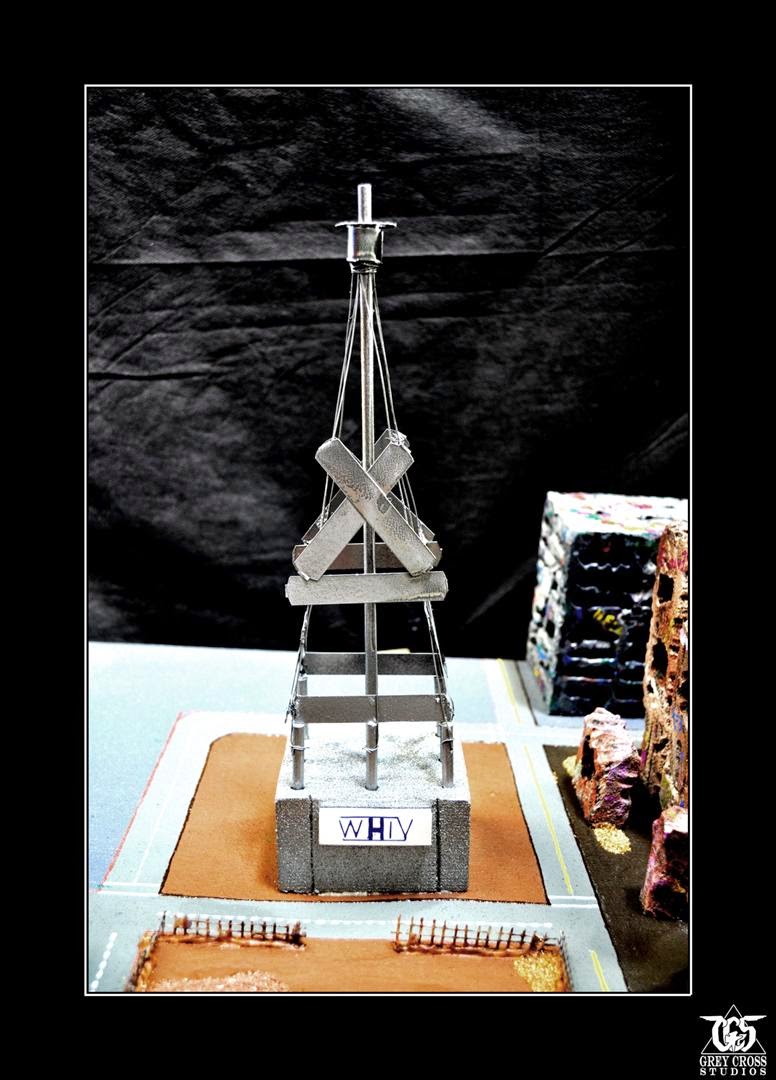 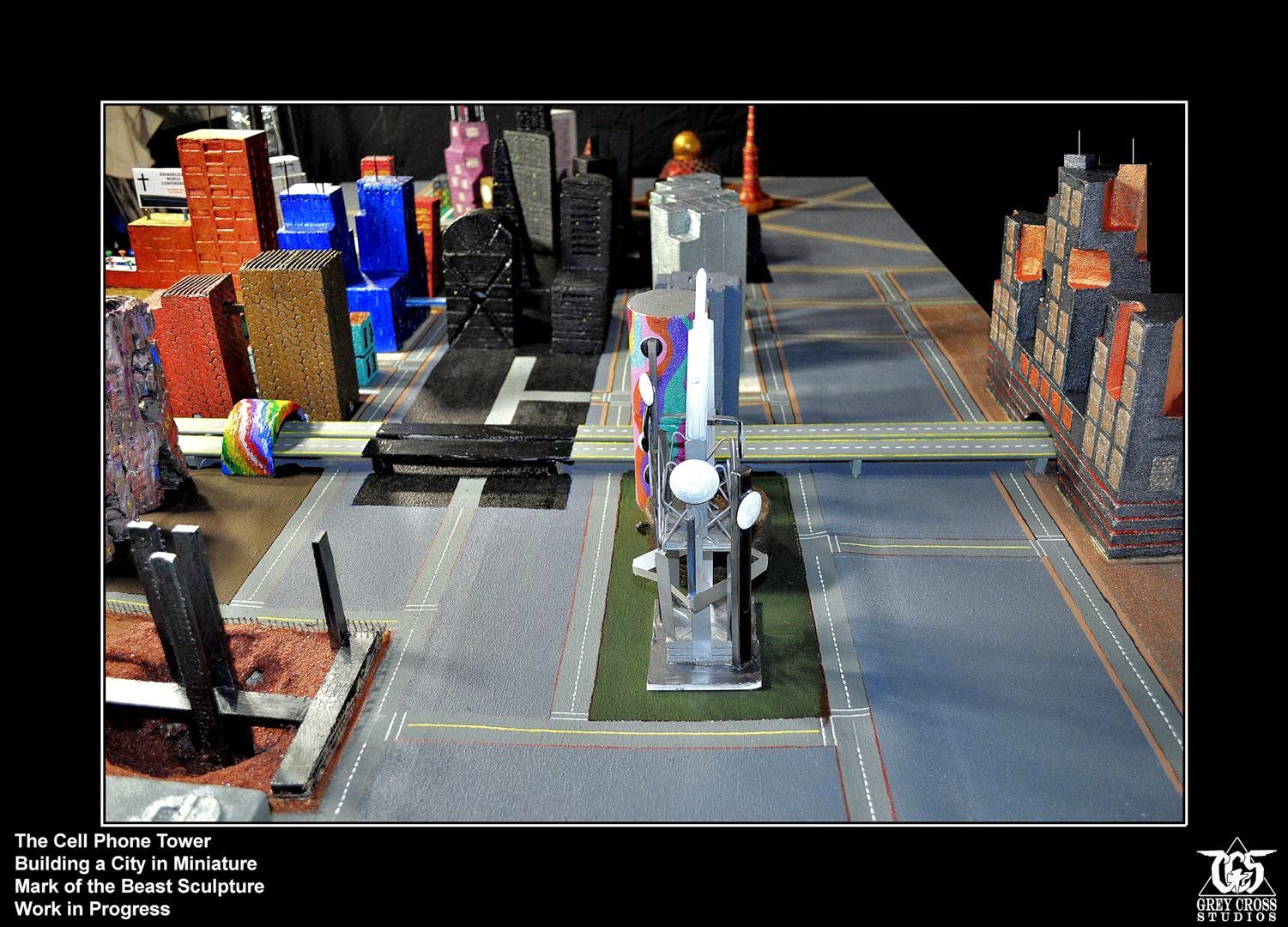 There are four unique urban decay structures. Each was created by hollowing out and sculpting dry foam using a dremel Each structure is graffiti covered and one is partially ivy covered using dry moss. 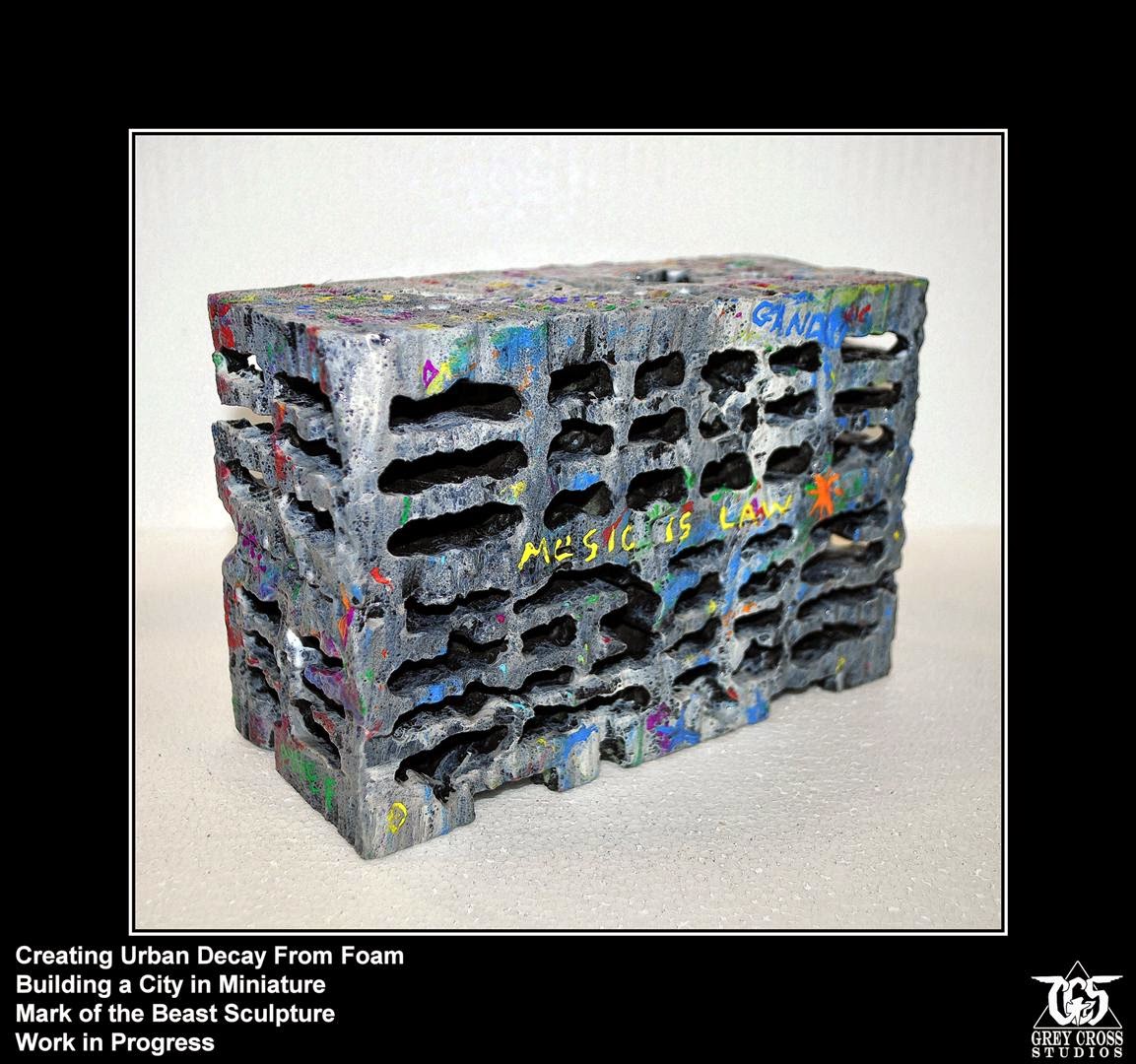 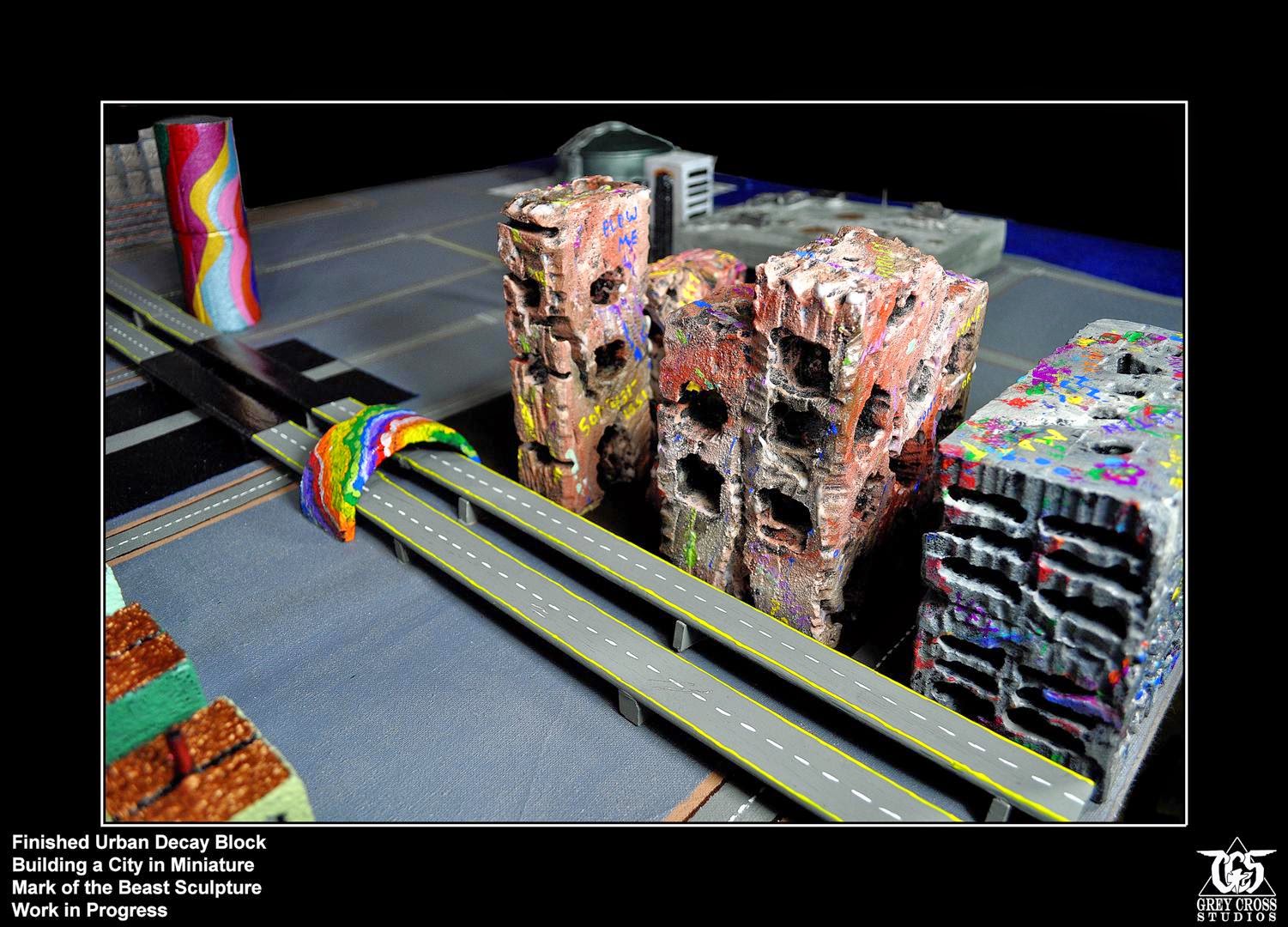 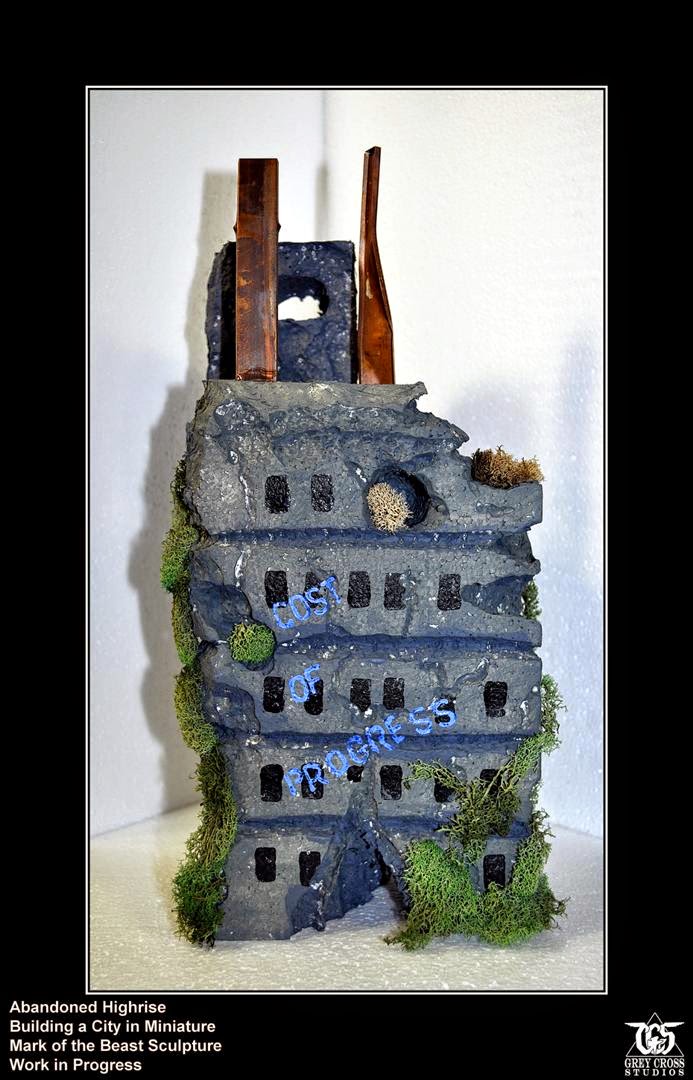 The Mosque was created from a broken mosaic glass candle holder which was epoxied to a foam base. The dome was created using a common household light bulb. 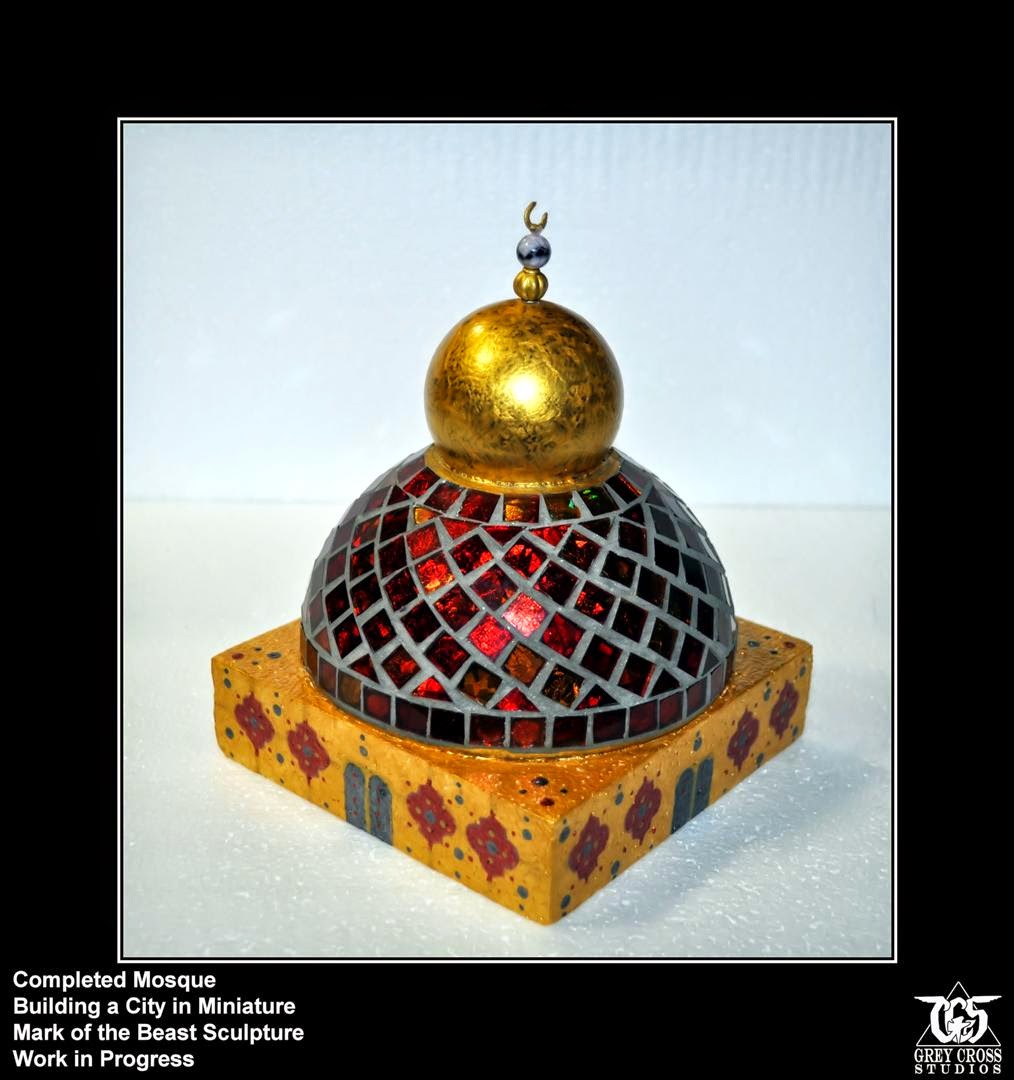 The Treehouse Condo was created from a very termite eaten piece of wood that I found on the side of the road. The structure of the wood was sound, so I brought it home, cleaned it up a bit, sanded it and sculpted it a bit, then set it on a foam base. Its unusual, but most concept architecture is these days 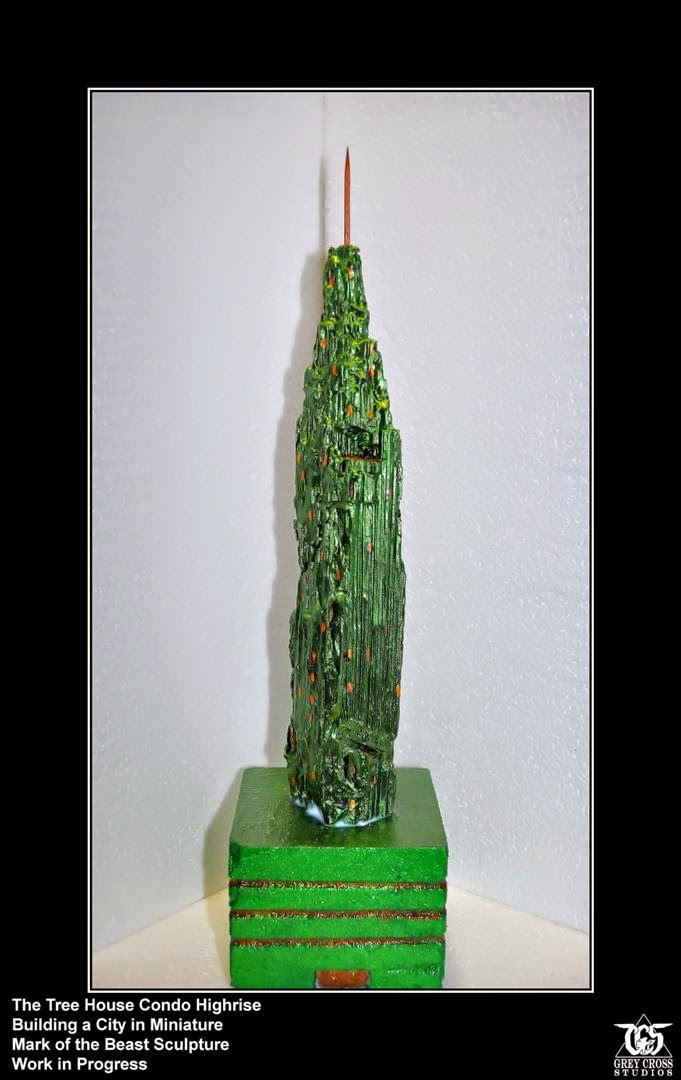 There are many more structures of course, but those are a few of the more unique pieces.

My biggest concern with this piece was that the meaning of the piece would be lost in the complexity of the cityscape. The idea for this piece came from protesters in Salt Lake City regarding next years ninth World Congress of Families. Many were very upset that this group was going to be spreading their antigay bigoted views. Someone in an oped said "it casts a shadow across our beautiful city". And there it was. The image captured my imagination and has become reality. The city does not represent Salt Lake, but is an amalgam of every city cast under the shadow of evangelical extremism. It is the true mark of the beast.

I'm not sure how many will understand my meaning. It will be interesting to see how its interpreted.

In The Coming Days

The sculpture is only about 60% completed at this time (2 days from Christmas 2014). I have another month or so of work to go on it that includes refining. I may donate it when complete unless there is a definite buyer interested. If you know of any organizations that could benefit from it, let me know.

I will update this blog entry with complete and additional facts regarding the piece once it is finished. Here is the most updated view of the piece as of today 12-22-14. Follower my twitter for daily updates at @GreyCrossStudio 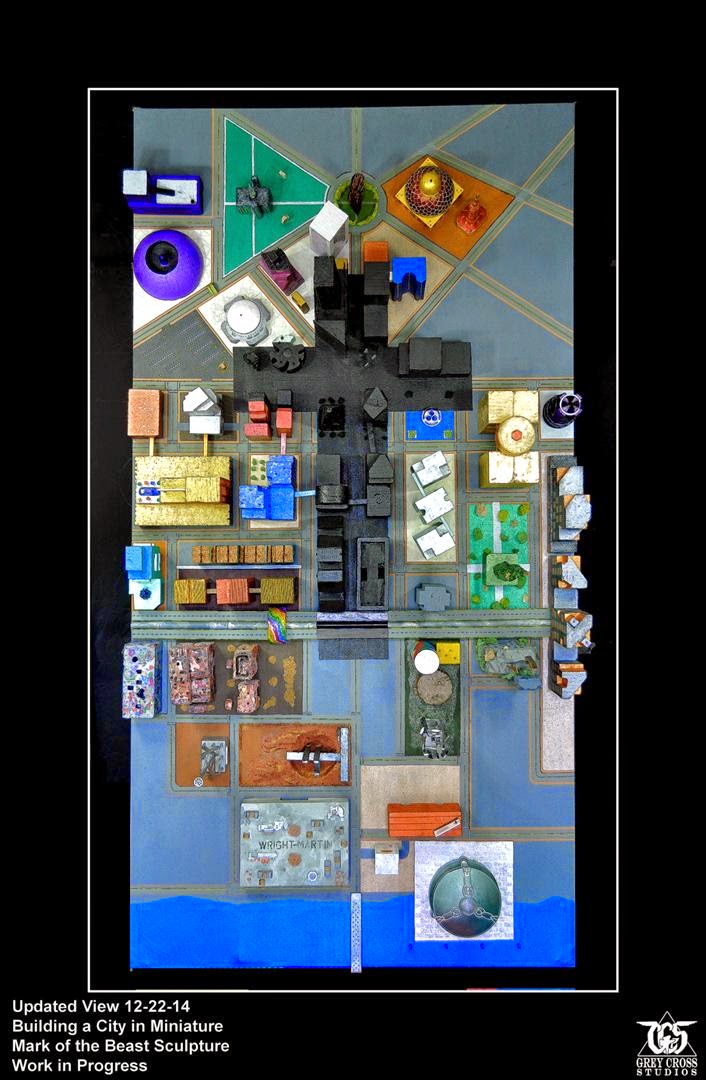