The Knowledge of the Tree of Good & Evil

n.
1. something that fills the place of something else that is lacking; temporary substitute; makeshift.
adj.
2. serving as a stopgap: a stopgap solution.

I pose this as a thought exercise. Set aside your ideas of the world a moment and step into anothers shoes and imagine a different world than what you know.

You have to understand that I do not believe that the curve of mankind's development started at the bottom and went up to present time. Rather I believe (as many more do these days) that we were preceded by an earlier civilization. Where most think we began as cave dwellers discovering fire and worked our way up. I believe more and more evidence shows that we've already reached a pinnacle of technology and were somehow destroyed, bringing us back to the level of caveman to begin our ascent once more. 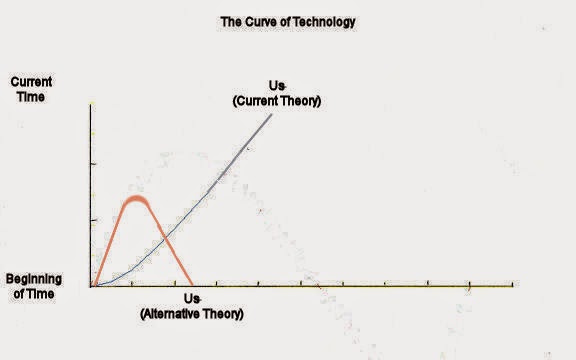 Imagine if you would for just a moment that such a thing were true and that that early civilization was not destroyed by natural causes, but rather by technological devastation of their own making. Would it be logical that they built to high and to fast and destroyed themselves?

Yes its all hypothesis, but as a trans-disciplinary artist, I constantly engage in the "what if" game and take a very very long view of both the past and the future and what they both mean.

Think for a moment what you would do, if you were one of the few survivors of such a civilization. What if you were one of the few that had not lost your ability to think and reason while those around you were being cast back to a barbaric way of life. What if you and a few others still understood what had happened and determined to take steps to not let it happen again. But you have no resources. You have only your own brains and the lessons of the past to guide you.

Some think that those people became gods. Lording over the ones that were reduced to creatures. But what if a few were humanitarian and desired to see the mistakes of the past repaired. What would you (in their place) do to ensure mankind's redevelopment along another path? How could you "nudge" it?

I asked myself this after reading a very interesting article and the inquisition. My answer was that I think I would create a religion that shunned technology.

I would focus my energy towards creating a mythos that made others fear knowledge and shy away from it rather than crave it.

The second chapter of Genesis reads:

15 The Lord God took the man and put him in the Garden of Eden to work it and take care of it. 16 And the Lord God commanded the man, “You are free to eat from any tree in the garden; 17 but you must not eat from the tree of the knowledge of good and evil, for when you eat from it you will certainly die.”

And it worked. for 6,000+ years its slowed us nearly to the point of stagnation. Even today, there are those who say "knowledge is evil". How many fear science even now and decry the theory of evolution, the big bang and climate change?

The old testament had its roots in earlier teachings as do all modern religions now. But this theme of shunning knowledge seems to be present in much of our early history.

Did this grand experiment work? Are we still in peril of learning too quickly? Did it fail and hold us back for too long?

There are no answers, but I write this to make you think. We are so ingrained in the ways we perceive the universe around us that we fail to see any other alternatives to who and what we are now.

I will write more if I feel I have the right words for it. I hope it made you think.