Art Marketing - Showing your Work in the Best Light

The total of activities involved in the transfer of goods from the producer or seller to the consumer or buyer, including advertising, shipping, storing, and selling.

Some of you have asked me about my recent changes to the formatting of my work and why I've changed my marketing tactics. For those that haven't seen it, these are before and after photos.


What I've found in today's social network environment is that people love to look at photos, but they hate to click on links. I think part of the reason for this is because there are so many viruses lurking out there on sites people haven't been to before.

The result for artists is that people love to see their work, but rarely investigate more about the piece they like.

After months of consideration and tinkering with different concepts, I finally decided that I needed to do something specific to counteract this click-phobia.

My art is complicated. It can rarely be described in a few words and I would like to think that the descriptions of how a piece was created is part of the reason people would like to buy it. I keep a pretty comprehensive portfolio that shows any given piece from multiple angles and describes both the materials used and the motivations behind many of the pieces.

But if people are never clicking on the link to see it, well its a waste of time.

I am a firm believer that you must engage a potential buyers imagination in the piece as much as their art sense. When they become emotionally involved in the piece, they are more likely to want to add it to their own life.

So with these things in mind I've changed my own personal marketing to make the most crucial information accessible directly with the photo of the piece. As seen above, all the basics are included in one graphic. I sometimes include a link to the larger portfolio, other times I just let it stand alone on the various social platforms.

I've found the format change is easily manipulated towards my photography prints also as shown here. 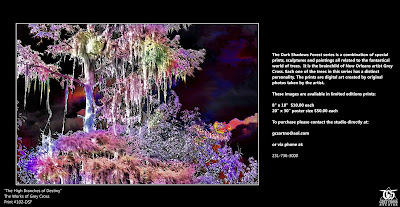 It allows for some nice variations while staying within a preset format.

While it is too early to know whether it is an effective art marketing tool, but I will be watching the numbers closely and tweaking the concept as I go along

Now there is an extension of this formula that I am also exploring. Some of you know that on Twitter I often share Work in Progress photos of a particular project. Artists can follow along and see how pieces of art go from concept to completion. Its instructional for me because it makes me photograph the art at every stage and observe it closely (I've written on this in other blog articles). By describing different concepts it gives me a better grasp on the processes I am using. And the added benefit is that other artists have the opportunity to observe and offer their own thoughts. As of a few months ago I began keeping all the photos for a particular project under a specific hashtag allowing a follower to go back and look at a hashtag stream and see all the work in one place.

Their are two problems with this system though. First, the 140 character limit on Twitter does not always allow for a comprehensive explanation of techniques being used. To explain over multiple Tweets can sometimes lend to confusion even using the hashtag system. Second it makes it very difficult to share the information on other social networks. A Tweet can be cut and pasted but it has to be reformatted to make any sense off the Twitter platform.

The result is that I rarely share work in progress photos on other social networks. And while I think Twitter is one of the best out there and my primary interaction area, I still feel like I am disenfranchising other artists by not sharing in other places.

So as of tonight as I begin a new sculpture in the Dark Shadows Forest series I began using the above formatting techniques to show the Work in Progress Photos. 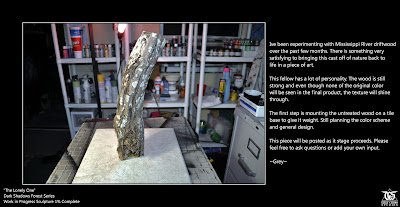 After this first panel I will number them in sequence as each one is added. It gives me more room to pontificate on various projects and I would like to think looks a lot more professional. Now with only a few words typed on the various social networks I can include the photo and still keep to my hashtag rule while sharing a whole lot more information with the viewer.

It is possible that it not only is it beneficial to other artists and to my own art, that it may also bring in potential viewers who may also become purchasers later on. They are more engaged in the art because they get to participate in its creation in a way.

In today's art environment it is crucial that we learn to create a unique niche for ourselves and take advantage of every marketing tool we can. Most of us will never find the golden ticket that makes our work sell but we CAN take steps to get ourselves seen. I hope this helps. Dig around in my blog. There are lots more.