Of Art, Mourning & Celebration - The Therapeutic Art of Hurricane Katrina

I've spoken often in the past months of my need to create art surrounding Hurricane Katrina's 10th anniversary. I won't post links to previous posts because honestly there are many of them.

As I've been developing both the photo series and the paintings, I've gone as far as to establish a small indoor shrine within my studio which some of the Hurricane Paintings sit behind. 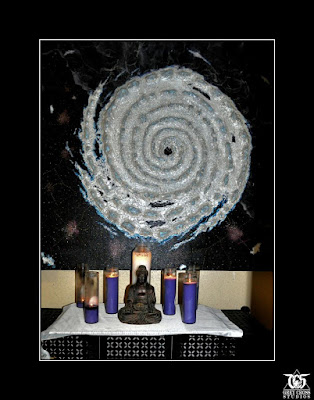 Its been important to me in a way that I can't quite express. I am not a religious person. I do not do this out of a need or comfort of any god or goddess. I do it out of a need to place a higher part of me on a level with the spiritual aspects of the storm and the people involved in it. In some ways its like reaching out to touch that mass of confusion that the storm created and calm it and stop its pain. I cannot express it any better than that.

I can say though that so far its been a summer of learning that I expect will continue straight through until the anniversary on the 29th of August.

Tonight I took it one step further. On the small porch in front of our studio/home I designed a second shrine. 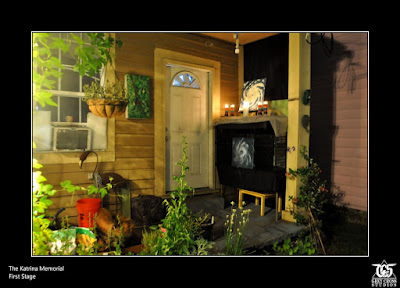 This one is more public. It can be seen from the street and I plan to make it an evolving project throughout the summer. I've designed it to allow for others to place candles on it or to leave tokens beneath it in memorial. It is important to me to have a place in which to do so.

Some of the art will no doubt be displayed upon it throughout the summer months. 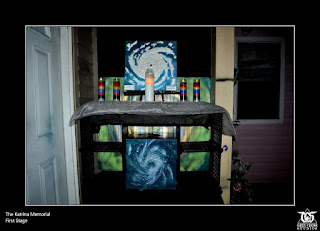 Its fascinating to me to see how people are coping with this and how I am coping myself. I suspect that there will be other shrines and altars discreetly placed around the city. New Orleans is known for such things. For St Joseph's day, a Catholic holiday that most don't even realize exists, there is an abundance of altars placed around the area in public spaces and private homes. Meals are offered and shared on that day with total strangers and homes are opened with grateful heart.

I think perhaps I would like to see something like that happen in the future for Katrina. A celebration rather than a mourning. Perhaps that is what this is all about. The summer will tell.

Your thoughts are always welcome.

For those interested, here are the links to the three Katrina Portrait series.

The Faces
The Land
The Paintings
at 4:10 AM