Many aren't familiar with the concept of Free Range Art (FRA) but its something thats fascinated me for quite some time. Its the idea of placing free art around a city where people will see it. Some of it is totally anonymous, others not. Graffiti is a great example that usually gets a bum rap because its equated with vandalism.

In my personal opinion the objective of free range art is to find a way to place it without becoming vandalism but in a way that allows the artist to gain some notoriety from it.

Utilizing FRA along with a concerted marketing and advertising plan for an artist can help, but its a fine line to not end up with a hefty fine from it also.
One of my favorite examples of Free Range Art are the mysterious Toynbee Tiles found in various cities around the world. These strange mosaic messages are embedded in the asphalt of streets and carry strange and mystic messages with them.

I love this concept because its very mystery makes people want to seek them out.

Banksy is a wonderful example of this. He's made a career out of anonymity coupled with damned good art. But he also faces the constant threat of potential jailing depending on where he places his art.

I've tried a few different concepts of FRA's. My first attempt was a scavenger hunt concept of placing a secret certificate for a free $100 sculpture at various points around the city and listing just the GPS coordinates online for people to find. It yielded zip in turns of interest though. In six months not a single certificate was returned.

I think though that smaller is better with things like this and keeping it simple may be the way to go.

So I am going to try a series of ideas next to see what kind of response I get back from it. I am redesigning my website to better accommodate my sculpture inventory. Then I am going to create a series of small iridescent skeletons about 6 inches tall. Each one will be holding a tile that says immortalartist.com on it and nothing else. The skeleton will then literally be nailed through the pelvis to telephone poles throughout the city. You can see one here in its finished state with my hand for scale. 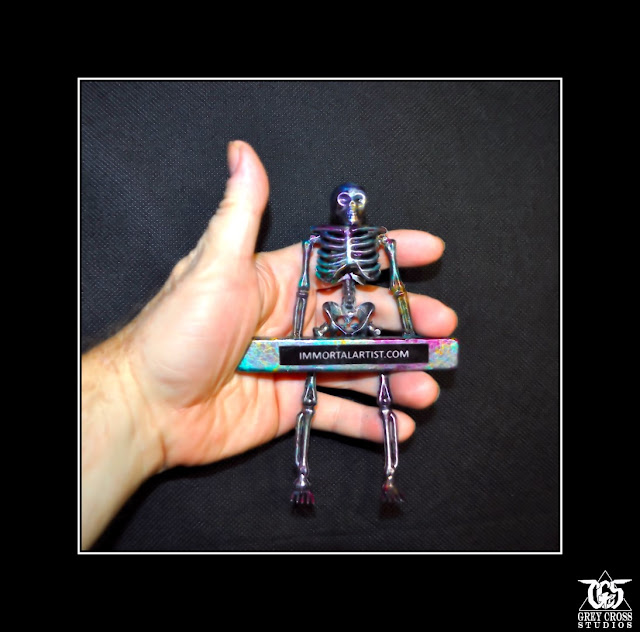 The piece is very small, but the iridescent quality makes it stand out nicely. I was originally going to engrave the website name on it but I found that was just a little too time consuming. This was simply printed on white paper and sealed to the tile using polyurethane. I used the spray for it so that it would minimize the ink running, but was surprised to see that it didn't effect the ink at all. It should seal the paper (at least I hope) so that when it rains it won't effect the quality. This first one I will put out in front of the studio for a week or so and see how it holds up. If it does well then I can literally toss them up all over the city.

The point of the exercise is to put the website out there in a unique way that makes people want to look at it. In the redesign for the site I've placed my art in a more prominent position and I will offer a weekly special on the front page using my "New Orleans" only concept. For those not familiar this is a weekly special offered only to locals. There is no shipping and the item must be picked up at the studio after purchase.

Keep in mind that the reasoning behind Free Range Art (at least for me) is to create a local following. How do you make people look when you are dealing with no kind of advertising budget and at the same time bringing something unusual and hopefully artistic to your local area.

Step #2 of this experiment will be to offer something additional on the FRA's, such as a special coupon or message. This could be done in replacement of the website URL, or in addition to it. Or a larger tile could replace the smaller one with more information on it. I like the concept of special quotes or inspiration.

While I test out the strength of the prototype I'll start designing and painting additional pieces to be distributed out. The hardest part (and don't laugh) is gluing the hands to the tile. I'll have to work on that part!

I'll update this page later as I continue this experiment!

Here is the first piece with the simple URL posted out in front of the studio. 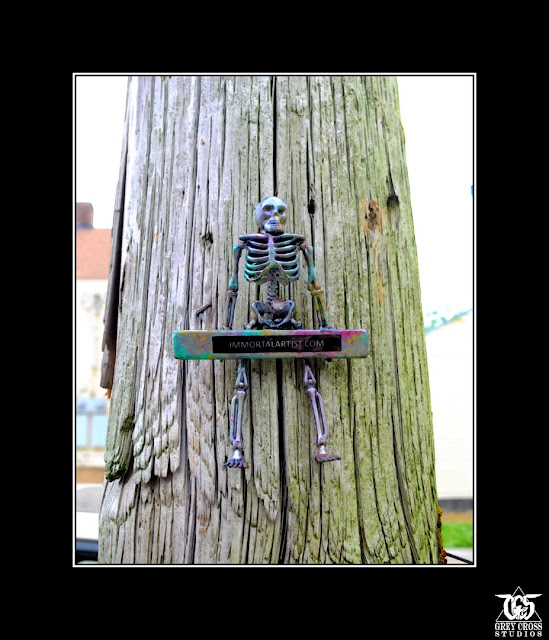 Here is the first update for the skeletons. There were some complications going from the single logo version (shown above) to a larger tile message. After several unsuccessful attempts to make sure the paper for the message adhered tightly to the tile plate, I had to discard the concept of just printing up the message and sticking it on there. Instead I printed up the first 8 and took them to Office Depot and laminated them. For the cost of $2.00 per sheet I was able to laminate all 8 on one sheet, cut them out and then glue them directly to the tile base. The laminate eliminated the paper from curling and sealed it permanently against the rain. I'm preparing the first 8 now. My plan is to prep 25 of them and then go into the French Quarter and Central Business District of New Orleans and put them up on various telephone poles. Each one will have a specific quote on it. I will probably put a 10% off coupon on the website for anyone who saw one them and checked out the site. 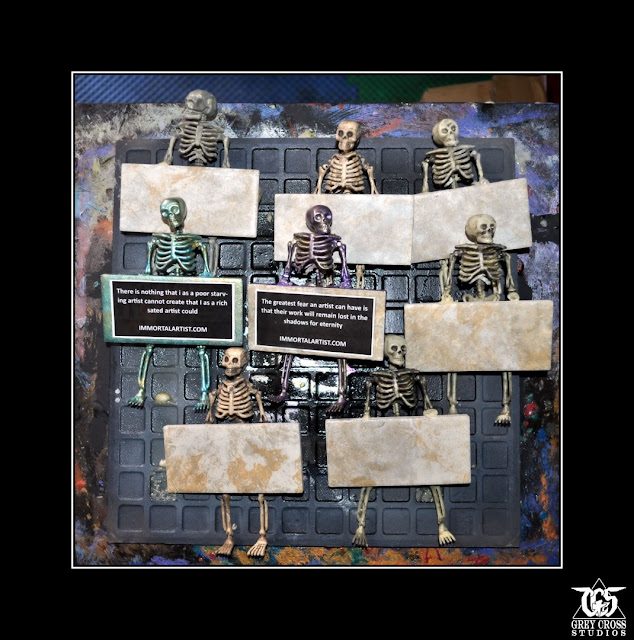