Protests and Activism as an Art Form (ART IDEAS)

Art Ideas is a series of conceptual ideas for changing how we operate as artists and how the art world functions as a whole. All ideas are freely given and welcome to anyone who might be able to pursue them. The Revolution Begins With Beauty. 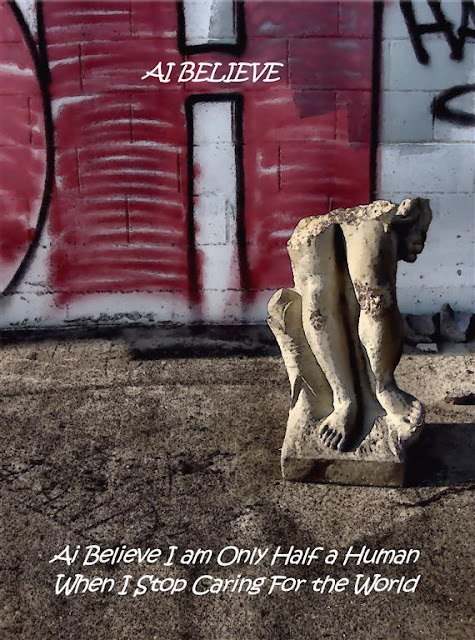 In today's world there seems to be a protest about something almost every day. Most have valid reasons for doing so. Believe me, I think protests are one of the most important forms of public expression we have.

But what I think what is missing is the form of the protest. A mob milling around shouting just incites more violence rather than less. It often seems that this form of protest ends up having its message totally lost in the maelstrom of emotions.

It has always puzzled me why more people do not take a creative approach to protests and activism. The greatest protesters of the past hundred years were always the ones that looked at protesting as an art form rather than a discontented rabble.

Look at Gandhi for example. He is known for leading the "peaceful protest movement". But what many seem to miss is that the man was truly an artist where it came to dissent. He thought through his goals first before he moved.

Look at the great Salt March which he led. This was a march in protest of the British stopping Indian citizens from producing salt reclaimed from the ocean. The March was 240 miles long and it began with only 78 people following him. But he walked the whole trek to the ocean. By the time he arrived he had thousands following him. Then he broke the British law by scooping up salt on the oceans edge and proclaiming that the Indian people do the same.

I have no doubt that people may have been harmed in this trek and this breaking of the British laws, but the simple fact remains that his message was clear, his protest was creative and it did more to encourage an impoverished people than any riot would have accomplished. The message was not lost.

Move up to modern times and look at Martin Luther King and see that again while some people were hurt and killed, never ever did he allow the message of each of his marches to be lost.

Now look at modern day protests. Take Black Lives Matter for example. The message is clearly there in the very name of the protest, but what occurs when the police brutally kill black citizens? Is there a clear direction for the protests? Or is it nothing more than a riot? Is the response staying on message? Is the response creative? Is the response well thought out? What would happen if every one of the thousands of people who are protesting just gathered together and sat down? Nothing more than that. Just sat, sprawling across sidewalks, in front of doorways, across roads. Right now the police make examples of the few who cause the most trouble in a riot. But would they or could they possibly arrest a thousand people sitting peacefully? When we give reasons for teargas and riot gear its because we are acting in anger.

Sit. Give interviews to the press. Speak calmly and stay on message.

But this seems never to be done.  In fact the message disappears beneath a tumult of mayhem, fires and arrests. Its drowned out and what results is little more than dismay and sadness.

I would suggest that whats needed is an artists point of view. More precisely an "art activist" who uses their creativity and art to steer public opinion on the issues. By embedding a creative mind that can brainstorm scenarios for protesters, the issues stay foremost and is not lost in an ever decaying mob mentality.

Just because someone is protesting something unjust, does not mean that some planning should not take place. Yes, there will always be those who think with their emotions first and violence and even death will ensue. But if a core group stands calm in the center such as Reverend King did, then the possibilities are unlimited. He was not only a hero because he stood for a cause. He was a hero because he steered the troubled hearts who were wounded by bigotry and hate. He was a hero because he thought through situations logically and creatively.

Look at dissident artist Ai Weiwei to see what a modern artist can do to bring public awareness to an unjust situation. His work in bringing awareness to the crisis of refugees has done more than any other to make people take notice.

We can make a difference locally. It does not have to be on a national or international scale that we set our eyes as artists on. We do not have to save the world if we can save our own neighborhood.

The bottom line is that artists can change the world and they can be a guiding influence in today's tumultuous issues if they do so with wisdom and calmness. If all you want is to draw trees for the rest of your life then so be it. I for one wish to make a difference and do so through the one skill I know I have and can always count on, my creativity. I encourage others to do the same.