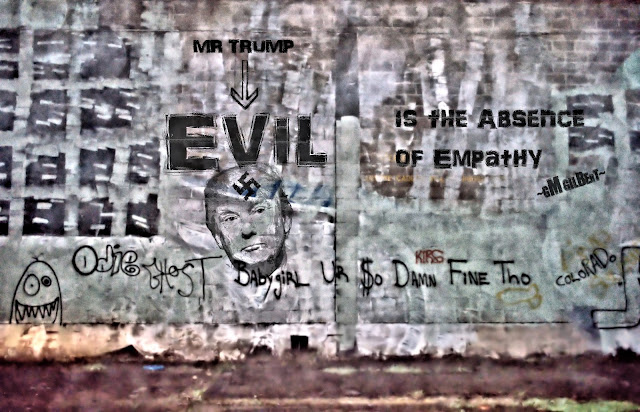 Imagine for a moment that it is 1937. Hitler is preparing for war. Europe is edgy. This man in Germany is frightening. But people are following him in droves. In less than a year Germany will annex Austria. But in '37, people are still not sure what to make of this monster.

In June, Pablo Picasso "should" be finishing his greatest and most famous work "Guernica". But this is not our world. The stage is set for this amazing work which he dedicated to the Nazi bombing of the Basque village of Guernica.

Wait....Guernica? No such piece of art ever occurred. Picasso went on strike with a lot of other artists, protesting Germany's growing aggression's. Silence is always a great way to express our distress. Isn't it?

But Guernica was painted and it expressed everything that Picasso needed to say about the horrors of impending war, and still stands today as an important statement about war and inhumanity.

Now we stand watching president Trump take over the United States, and artists across the country have decided they will strike in protest of Trump taking the oath of office. Let's do nothing! Wow....that is making a statement all right. That'll show Trump!

While I respect that the art-world wishes to do something to protest this inhumane man becoming one of the most powerful people in the world, silence is not the way to do it.

Becoming very loud (and I don't mean a protest rally) can make a much better statement than closing up shop and sitting on our hands for the day. Consider for a moment if every museum in the country opened its doors wide for this one day and said "come visit us for free!". What if every gallery, instead of closing down, had a special event planned for this day that was NOT in support of this sham of an inaugural? What if artists stood on the street corners and just painted with a big sign behind them that said "support humanity, not Trump"? What if artists created protest art and flooded the internet with it? Would not the accumulated impact of so many artists working together shift the press focus from Trump to the protesters?

No, instead we will sit idly by and refuse to watch the inaugural and wait for the day to pass. No wonder this man is now in charge.

Now... for those artists who have been and still are creating protest art and not sitting on the sidelines I say this. A lot of you have chosen to make statements in the form of art that mocks Trump. Orange haired orangutans with Trump signs. Pregnant Trump sculptures. Trump paintings where he looks like Gollum from Lord of the Rings. These are all cute. But they are also totally ineffective. Trump could care less about how you mock him. He sees us as nothing but fools.

Changing Trump's mind is impossible now. He sees himself as a god, and nothing, absolutely nothing will change his megalomania. Mocking Hitler did no good. Mocking Trump will do no good either.

The ones who need to change are his supporters. THIS is where your art should be aimed. Change the minds of his supporters and you destroy his power base. Think what a concerted effort aimed towards the German people would have done to knock their tin god off his throne before World War II. But the German people were led to believe that Hitler was their GOD. Hitler took control of the media first, and every message put out was about how he would save the German people and make them the master race. I see Trump doing the same now.

Start showing the American people where this could be heading. Aim your art towards every group who supported Trump (including other artists) and show them what danger we are all in and where we might be heading.

THE REVOLUTION BEGINS WITH BEAUTY 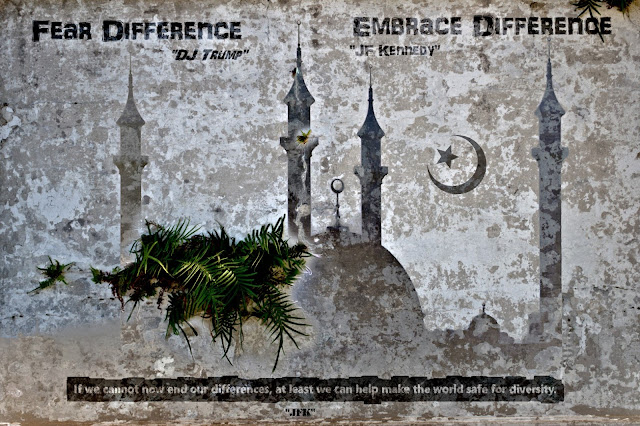