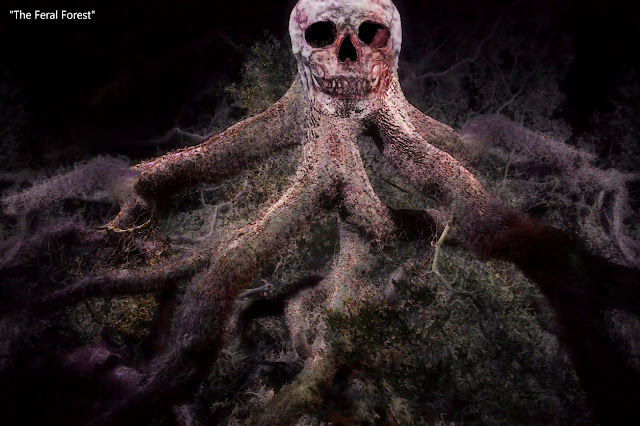 "Why does he smile so?" Hazel glared down at the man below her. "He's on his death bed in this vile rodent infested hut, still he smiles."

"He smiles because he thinks he is safe." said the caretaker who watched over him.

"Safe from what?" Hazel swatted away the flies that buzzed around her. "Most of the villagers want to see him punished, by any means necessary."


"Well, first off I was able to convince Elder Duma to hold off that mob, before they burned this hut down with him inside." The caretaker said.

"As he deserves." Hazel said. She covered her nose in an attempt to lessen the stench of Rupert's hut. "So he's safe because of that?"

"No child." The caretakers said with a weak smile. "It is not this life he cares about. It is the after life that he thinks about."

"Is he mad, he assaulted people, H-he murdered five villagers, including my s-sister." Hazel's voice began to crack and tremble. "For God's sake unspeakable horrors await him in the after life. He even refused the final rights."

"He does not need them." The caretaker looked out the dingy window in the direction of the forest. "There is a reason I offered to care for him during his final hours, in his own filthy hut no less." She paused then continued. "Rupert here is a warlock, or was, now he has  been reduced to a feeble old man."

"Like a male witch? then he will suffer in the afterlife even more." Hazel said.

"Normally yes, but Mr. Rupert here created an alter in the forest. One that would forced his sins from his soul and into the alter." the caretaker said. "It allowed him a free pass and a clean soul in this life, and the next."

Hazel's face wrinkled in disgust. "So he will never have to answer for his crimes? How can he get away with that."

The caretaker held a finger up as if to say but there's a catch. "Oh he won't get away with it, if you do your part."

"The alter needs to destroyed." the caretaker said. "That would release the sins back into his soul. But it must be before he passes away, that means tonight, at this very hour."

"Tonight? But I can't possibl-"

"It has to be now child. It must be before he takes his final breath."

The caretaker looked Hazel square in the eyes. "Three tasked are needed to destroy that alter. First you must offer a confession of your own to wake the alter. Second you must sing a song to anger and weaken it. And then, for the third, you will need this." She held out a hatchet to Hazel. "He used on his victims, you will use it restore the balance."

Hazel took the hatchet,speechless. Lost in memories and confusion.

The caretaker placed an hand on Hazel's shoulder. "This won't bring your sister back, either will plunging the hatching into his still beating heart. But you can still make him feel the true weight of his wasted life."

Hazel fought back her tears. She looked into Rupert's eyes, not so bright anymore, close to death. Her lips curled into a snarl. "Tell me how do I find this alter?"

Hazel shivered against the wind. It sliced though the trees and it pulled the moans and cries of the forest in her direction.

She found the trail Rupert used that lead to the alter, hidden only overgrown bushes. As she walked, the trail seldom changed. but the surrounds did. Wild flora gave way to hollowed rotted trees.  The ground beneath her feet reminded her of century old cemetery dirt.

After what seemed like miles, the trail narrowed to a dead end. The moon's light dimmed, blocked by a tangled spider-wed of branches and vines above. There was enough light ahead to illuminate the object of her destination.

Rupert had constructed the alter of an old tree stump upon which he placed a skull. It's eyes vacant and tenant less. The flesh long since rotted away, chipped, eroded but still bearing a cold grin. A dark green moss covered the alter. It merged the entire stump into the earth.

Hazel hesitated going forward, frozen from Rupert's lingering presents. The caretakers voice ran through her mind. It has to be now child, before his final breath. Hazel had willed herself to continue. She was here for a reason Revenge and retribution. She stepped forward and spoke.

"I confess that I brought it upon myself to judge another." It was a weak confession. she thought about it then added "and after this I am finding a drink, even if I need to steal it."

A glow appeared from the vacant eyes of the skull.  The skull's grin grew wider and it's mouth opened and with the fainted whisper it said "More sins."

Hazel's body went cold. She wanted to look away but forced herself to continue. She was ready for this, as much as one could be anyway.

Hazel knew the perfect song. The one they sang together as sister when they would sneak drinks from their fathers booze. She closed her eyes and began to sing.

There's nothing we can do to save this night

Our skins are bare our butts are bright"

She couldn't help but smile at the memory and, for the slightest  moment, her sister's voice sang along with her own. Then it faded replaced with more demands.

The skull's whisper had become something more terrifying, more deep. "Stop that." The skull demanded from the empty void of it's mouth.

It was time, Hazel lifted the hatched above her head, white knuckles held it tight. Then thrust it downward.

Before she could make contact a wolf jumped from the shadows. It lunged at Hazel, knocking her and the hatchet to the ground. The wolf snarled, it's mouth open bearing sharp white teeth. It's eyes dark and glazed.

Adrenaline surged through Hazel's veins. She did not dare lose eye contact with the wolf for fear it would maul her in seconds. She knelt down, her fingers searched the area around her for the hatchet.

The wolf now stood in front of the alter as if protecting it. It's fur stood up and a deep growl served as a warning to back off.

Hazel started to panic. She found only leaves and twigs and dirt. She fought off images of the hatched lost somewhere beyond her reach. Then finally, the comforting cold edge of steel. She griped it tight, determined not to let it go again.

The wolf paced in front of the alter as if sizing up is prey. It locked eyes with hazel, daring her to advance.

An unexpected anger rose inside of Hazel. "Out of my way wolf." She demanded, certain it understood, angry, like music, was universal.

The wolf stood it's ground. It challenged her for dominance. Without warning the wolf howled then lunged toward Hazel.

The hatchet stuck into the wolf's heart. Blood squirted out on to the ground. The wolf howled in pain and staggered, then fell to the ground.

Hazel stood over the body. Her eyes fixed on the gash that she created with the hatchet.
"More sins." The skull bellowed. "feed me."

Blind rage surged through Hazel. She assaulted the skull with a fury of hacks.

The skull retaliated. It forced Rupert's purged sins in the Hazel's mind.

She felt his first assault victim panic when stabbed with a knife in a dark ally. She saw the blood on his hands when he graduated to murder. She smelled the musty earth as he buried his victim's in shallow graves. She heard the screams of villagers in the night. She saw a puddle of rain reflecting the pride on his face as he built his alter. It was all there, the horror, the pain, the suffering.

The images finally stopped assaulting her. When her blood cooled and her eyes regain focus. She looked up. The alter was nothing more then a pile of wood chips and crushed bones. It reminded Hazel of the remains something fragile after a storm.

A dark fog rose from the ashes and into the air. It circled Hazel and then seemed to ride a sudden breeze out of the forest down the path and out of sight. She wished she could see the very moment Rupert's sins found their home in his soul. He will have peaceful death here on earth, she thought, but as for the after life. "There will be pain."

Ryan Rosenberry is a free lance writer and poet. He lives in Fargo ND with his wife and son. He loves the spooky side of life.