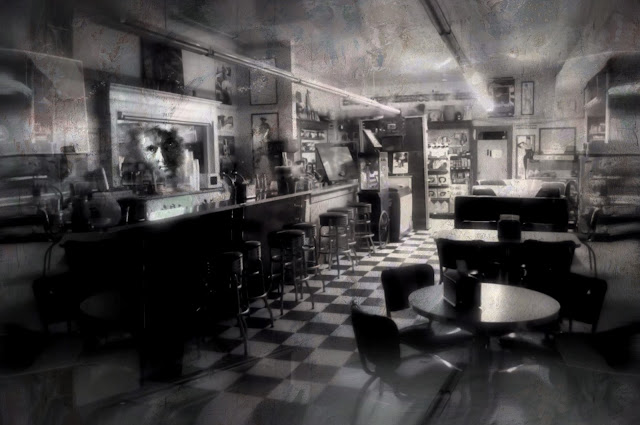 Most people looked to religion when they found out they were dying, Cassie looked to herself. This was a one of the thoughts that ran through Vincent’s head as he shuffled down the street.

He stopped in front of a 30’s styled soda shop. The store front had shown signs of wear and tear over the last few months. Appearances and repairs had not been kept up with. losing the one you loved had a way of killing his motivation.

Above the door hung a simple yet retro looking sign. It was also was in need of repair, still it displayed the name Cassie had chosen years earlier. The Cat and Canary Soda Shop. He let out a long heavy “sigh” before unlocking the door and stepping inside.

He stood in the entryway letting his eyes adjust to the dim light inside. He decided to keep the place closed today. He told his employees it was for “repairs.” He would lie if they asked what he repaired. He placed a closed for repairs note on the door and walked in.

Like most days, the large bar back mirror behind the counter was the first thing to caught his eye. And like most days it brought with it memories of Cassie.

~~~~~~~~
He’d first met Cassie at a used book store. He was drawn to her like a vampire to fresh blood. She was sitting on the floor with a stack of books around her. Most having to do with Ghosts and spirits and the after life. Lost in her own world with an intense expression of wonder and amusement on her face.

Vincent fell for her that day. He would spent the next few months chasing after her trying to win her over. She rejected him at first but persistence, and a sudden interest in the paranormal, would win her over. Back then it seems like they would have a lifetime together. He had  a lifetime to mourn her.

Vincent let out another sigh flipping a on the switch on the wall. Light filled the shop from above Illuminating the features of the place. They had covered the wall in records, hits of the 30’s 40’s and 50’s. Red spools that could spin around and around lined the counter. Behind that was the vintage goose neck soda spouts. All brought together by the black and white checker board pattern on the floor. The bar back mirror hung in the center. It was the only part of the shop that didn’t fit in to the retro decor.

He made his way behind the counter stopping to look in the mirror. As with most days he saw a man with a tired expression staring back at him.

Despite what Dani, his waitress, has said the mirror still served it’s purpose. She said how it was sweet that he wanted to keep Cassie's mirror at the shop. But it did not make sense replacing a perfectly good mirror with one that looked came from flea market. Like she could understand his need to have it here. He promised Cassie and he intended to keep that promise. What did she know. In the end it didn’t matter what she or anyone thought. This was his place. This was Cassie’s mirror.

He recalled how Cassie first heard about how ghosts and spirits could become trapped in a mirror. She talked about how the conditions had to be right and someone had to be looking into a mirror at the moment of death. She spent hours pouring over Internet pages. she found and talked to so called experts on the subject. Because he loved her, he encouraged her curiosity. What harm could it do?

After her diagnosis she intensified her need to understand the concept. She had said that she “knew her time was near.” She wanted to be ready.

She had propped up a large mirror in front of

The coffee table had transformed into a small alter. It held candles, small statues, various offerings, incense and old dried flowers. In front on it was a large mirror. He knew what she believed could happen. She had faith, he had doubts

A chime above the door pulled Vincent from his memory. He had forgotten to lock the door behind him? He glanced over to the door. Did Dani had forgotten that the shop wasn't open today. “That you Dani?”

A man wearing a black mask stepped in. He carried gun in his hand. His eyes fixed on Vincent as he locked the door behind him.

Vincents heart skipped a beat. He stood up strait. “We-e ahhh we’re closed today.” He said. “Your gonna have to leave now.”

The man held the gun low as he walked behind the counter.

Vincent took a step back, wishing he had a weapon stashed away in case of emergences.

“I can see that your closed.” The man said “repairs right? But I am willing to bet that safe of yours works just fine, hell, the cash might register have a few bills in it.” He raised the gun pointing it at Vincent.

Dread poured over Vincent. He had expected his life to flash before his eyes, instead he saw only Cassie…

“Are you going to tell anyone? I don’t think they would understand.” She said
Vincent wasn't sure he understood himself. He wanted to believe. “No, Cassie. I will this between us.” He forced a smile hoping it looked real.

“I know how it all sounds Vinc.” A weak smile creeps across her face. “All I can say is that it helps…. You know?”

The following day the mirror reflected her last moments of life. He replaced the existing mirror for one Cassie had found comfort in. What harm could it do? In a way it comforted him too.

The barrel of the gun came back into view. His hands instinctively went up in defense. “I-I don’t keep much cash in there.” He said and that was true. It wasn’t even the cash he cared about. The items Cassie was so found of in her last days, the ones on the small alter, where in there.

The man grew more aggressive. “Didn’t ask you for an amount soda-jerk.” His grin growing more sinister. “Now open it up before I open your head up.”

It’s not that Vincent minded the thought of dying. He thought about death a lot. He could take pills while staring into the mirror himself, hoping to know if Cassie might be there. He never trusted himself enough to do it right. If there even was a right way.

A faint cracking sound came from the mirror. Vincent turned to look earning a pistol whip to the head. A line of blood ran its way down his face.

“Look here Soda-jerk, I ain't going to tell you again. Open up the damn safe or I’ll turn that drip of blood into a gusher.

Another noise from the mirror.

The man tore off his mask in frustration bringing the gun down again on Vincent head. He followed it with a steel toe boots in Vincent gut.

Vincent cried out and fell to the floor. His eyes stung, forced shut by pools of blood. Above him a road map of cracks spread faster.

The man’s smile grew to an laugh. “Is that all ya got sodajerk?” he said still laughing. “Now get up or I’ll end you right here, grab the cash register and call it a day.”

The man pressed The gun barrel against Vincent’s head. From the corner of his eye he caught the movement in the mirror. Then a ghostly image of a woman.

The mirror exploded sending sharp jagged knives hurdling at him. They found their way into his flesh. A thousand cuts across his face and neck.

The gun shot off before he dropped it to the floor. He reached up in disbelief. The shards of mirror were stuck in him like a twisted pin cushion.

Vincent kept his head down, his hands covered his neck.

The man let out a series of spluttering sounds followed by gasps for air. He fell back onto the floor, he did not move again.

Vincent kept his head down his eyes forced shut. Fear prevented him from moving. A hand on his shoulder encouraged him the stand. It was soft and gentle and Vincent remembered it. For years it had been part of his life. He has not felt it since…
Cassie

A bolt of adrenalin hoisted him up. He used his shirt to wipe his eyes clear. His head-ached in stereo but the blood trail had stopped. He surveyed the place but in his heart he knew that she was already gone. For a brief moment her perfume still lingered in the air.

A week later after the police investigation. He arrived at the shop unlocked the door and stepped inside. Re-locking the door behind him. He wanted a moment alone before Dani showed up for her shift. He stood behind the counter in front of the newly installed mirror he had ordered. It was tall and wide and across it in frosted lettering read. CASSIE’S SODA SHOP. He didn’t think she would mind him renaming the place. After all this was her place too And he believed that in one way or another she will always be around.

Ryan Rosenberry is a free lance writer and poet. He lives in Fargo ND with his wife and son. He loves the spooky side of life.