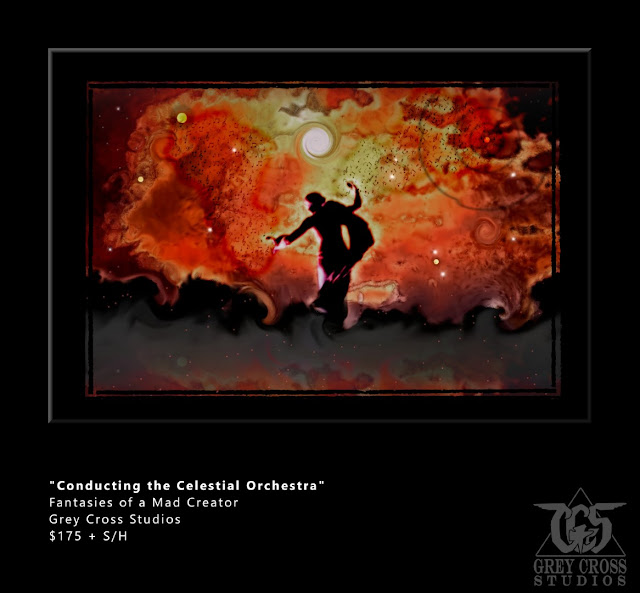 I watched the moon eat the sun, and I listened to the celestial orchestra.

It wasn’t until later that I became the conductor.

They want me to speak, but I am far too occupied.

“Sarah, say ‘cookie,’” my mother coaxes, a freshly baked chocolate chip cookie in her outstretched hand, hope and fear in her tired eyes. A cookie would be nice; I like the sweet crunch and crumble in my mouth, but the noise of it distracts me, and I must not get distracted.

I sit and listen and move my hands, making sense of the music that fills my head. Leading the gentle waves of strings through their sad, but lovely, path among the brightness of the trilling woodwinds.
Mother turns from me, “We’re at our wits’ end,” she says to the stylish woman with the notebook. This stranger has come to examine me – the latest in a long procession of well-educated, well-meaning men and women who do not understand the burden I carry.

“Her records show that she stopped speaking a few months ago, right after her twelfth birthday,” the woman says, “Is that correct?”

“Yes,” my mother replies. She’s picking at the cuticles of her left hand now, as she does when she’s anxious; as she does whenever she talks about me. My father sits  quietly on the other end of the sofa, saying nothing, staring at something indiscernible on the wall, remote and detached as always.

I weave the melodies  with my hands,  and my body sways with the  ebb and flow  of the music.

“And there was no precipitating incident?” the stranger asks, looking up from her notes.

“It began when she was seven. We’d gone to see the total eclipse of the sun. She was quiet the whole flight home; we thought she was tired. She started speaking less and less … staying in her room … just withdrawing from the world. “Mother sniffled. “She hasn’t spoken a word since her twelfth birthday. And she started that hand flapping and rocking stuff.” Mother’s voice hitches. I hope she isn’t going to cry again. It is hard to concentrate when she cries.

Father harrumphs. “That was right after she got her 12-year booster shots,” he says.  The note taking woman looks at him as if he’s said something stupid, and he goes back to staring at the wall again.

I scoot my chair into the corner and turn away from them. I’d almost dropped the tune while I was listening to their chatter. I spread my arms wide and let my hands go loose to gather the strains of my orchestra. Waving them in, waving them in; weaving them together. Order. Harmony.

“We’ve seen cases like this before,” the woman says, closing her notebook. It can be a challenge when these behaviors arise later in a child’s development, but with effort and work on our team’s  part – and you, as the parents, are part of that team, we can help Sarah become a functional member of society.”

I close my eyes. The brass was losing its way, tubas stomping on the gentler exaltation's of the orchestra like panicked elephants flattening a bamboo forest. I breathe and rock and soothe them with my hands until they are calm.

“Thank you so much,” Mother says. “We will see you next week, then.” She escorts the woman to the door; a gust of wind  swipes the notebook from the woman’s manicured hand, and she clip-clops in her heels, running after it.

“Sarah,” Mother turns, smiling, to me. “We’re going to make you all better!”

I keep my eyes shut and lead the cellos in, letting their rich tones swell and wash over the rest of the orchestra, and I sway in their warm embrace.

Several movements pass in harmony before the notebook woman returns. Mother and Father have let me be in peace; they seem relieved and more relaxed since their meeting with her and have not tried to bother me too much. I feel better, knowing that I’m doing my work, that the music continues, uninterrupted, running like streams and rivers, sometimes crashing like waves on breakers, but never ceasing, quieting and swelling under my direction.

The notebook woman is Sylvia.  Her name is like the triangle, a ting-a-ling in my head, but her eyes are like the hard, bright clash of the cymbals. She sits across from me at my table, seeking out my eyes which are loosely focused on the floral design of the tablecloth.

I keep my eyes down. My fingers are telling the piano its notes and chords and I need to get them right.

Sylvia says, “I’m going to help you look at me, Sarah,” and lifts my chin with her fingers. The piano stutters and then a harsh and broken chord crashes out, breaking the rhythm of the orchestra, disturbing the flow.

“Was that thunder?” I hear Father calling from the other room.

I twist my head away from Sylvia’s hand and turn my chair to the wall, trying to keep my hand movements fluid and rhythmic, to reign in the burgeoning chaos of the confused orchestra. Breathe. Breathe. Soft. Soft. Up. Down. Tempo. Tempo.  My hands are flying, trying to collect the pieces as they scatter, to bring them back to the score.

Father and Mother come out of the living room. “There’s a storm coming in,” Mother says. “Do you hear
that wind?”

Sylvia is unperturbed. She is focused solely on me.  This woman is as committed to her mission as I am to mine, it seems. She pulls my chair around. I close my eyes and my arms flail, needing to gather the suddenly chaotic noise emanating from the orchestra as the woodwinds go shrill and the drums start to pound out of time.

Father is yelling now, as he pulls open the drapes.  “What the hell is going on out there?”

Sylvia’s hands are snatching at my own, but I am fast, rapidly grabbing at the disparate instruments as I try to tame their nerves and calm their anguish. But she is faster. She traps my hands in hers and holds them tightly.

“NO FLAPPING!” she shouts at me, but nobody hears her yell because the windows have blown out and all they hear is the sound of shattering glass and the howling wind.

All I hear is  the echo of the music in the growing silence as the orchestra dies away.

And then there is nothing left to hear at all.

Libbi Rich is an intermittent writer, photographer, and maker of things. She lives in Arizona with her son, cat and dog.
at 3:38 PM