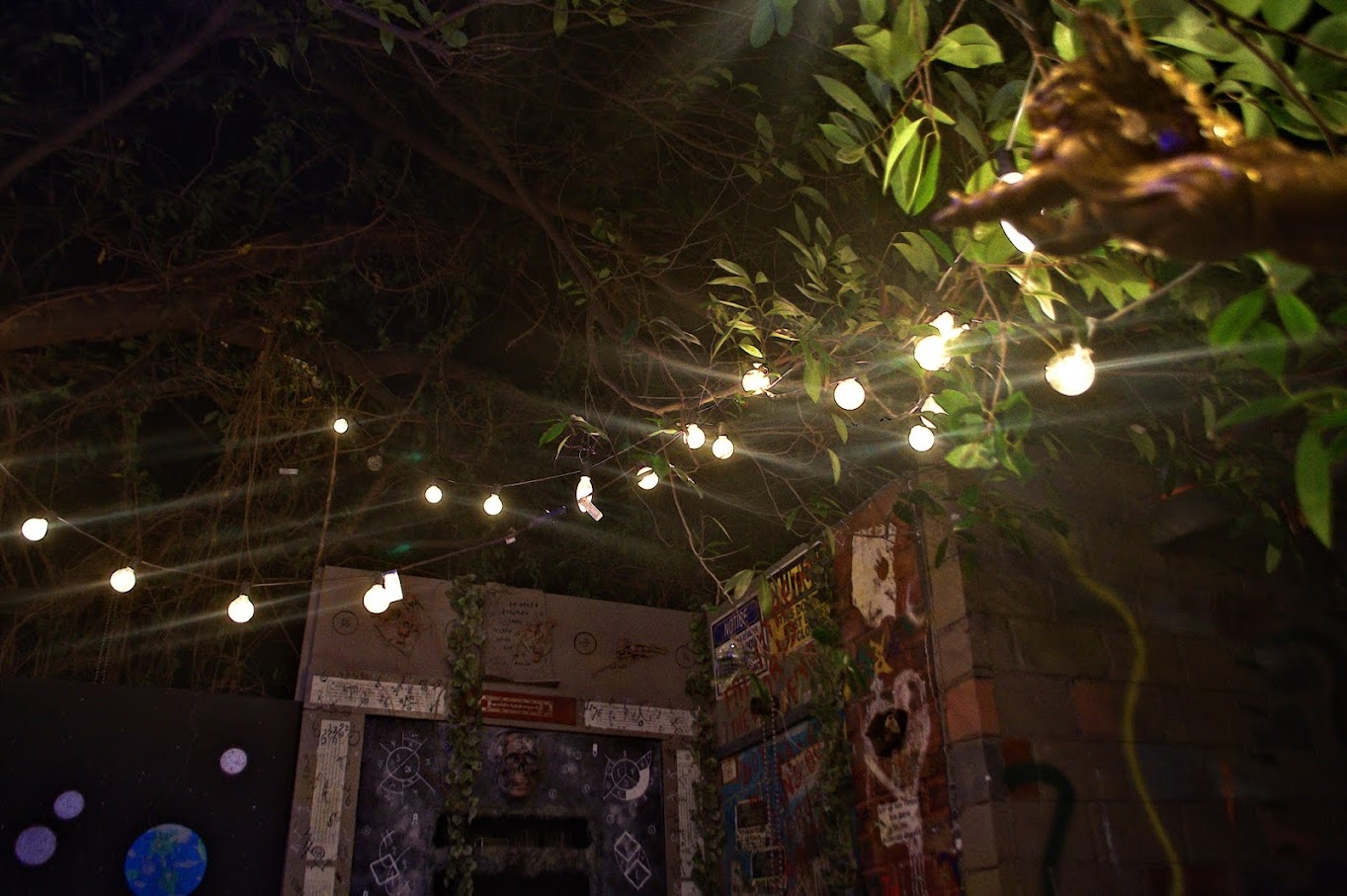 When I began building the first outdoor studio in August of 2019, I'd not considered how it would hold up against a bad storm. As fate would have it, only a few days after its completion it was destroyed by a tropical storm. Not only destroyed, but decimated. That was my first lesson in outdoor studio building. I let it lay dormant until October and I began afresh, intent that it would not come apart so easily. In fact this time I anchored directly to the back of the house. If it was going anywhere, it was going to take the house with it.

I was still not finished with it (nor probably ever will) when summer returned to New Orleans in April of 2020 and I was forced to give it up, hoping it would stay together through the long hot months to come.

I shored up the walls on two sides with heavy 2 x 8's and removed anything that was not strong enough to take a gale wind. And then with a whisper of a prayer to the Gods of Art, I shut off the lights and left it to itself. On midsummers night, I decided to take a quick look at how it was fairing. We'd already come through one tropical storm by that then and I figured it was a good time to check and make sure it wasn't in a heap.

Surprisingly, inside the structure it was almost as I had left it. A five minute walk through revealed nothing concerning and I retired back to the cool household for the next 3 months.

Here it is, the last week in September and the first week where the temperatures were finally coming down. This is unusual. We easily have 100 degree days into October.  It was time to survey the space. Mind you that no less than four major storms had come near to New Orleans between June and September including last weekend. I braced myself for the worst.

I wanted to wait until evening because that is truly the most amazing time to be in the studio. With a candle in my hand I made my way down the weed choked pathway to the back of the house. That would be the first task during the day. A clean cut of the pathway and anything else that needed weed whacking.

Using my candle I reconnected my power system to the area and prayed a few of the lights still worked. With a click the studio came back to life in a blaze of light and glory.

My outdoor studio had survived!

There was little to know damage to most of the art in the space. It was messy with leaves scattered over everything and a pile of odds and ends stored in the photo area, but to my relief everything was fixable. In fact the one thing that I had hoped would happen, had indeed occurred. It had taken on a patina of age. The cats claw vines had grown up and over the top giving everything the feel of a secret garden.

There was a whole lot of cleanup to be done and there were projects from last year that needed finishing. And the studio work area which was not within the studio itself would need a massive cleaning. But that would be enjoyable to undertake as the days and nights cool.

Tomorrow being a Sunday, i've set as the first official day of cleanup. Weeds first. Its a jungle leading in and that just wouldn't do. I think it will take several weeks to get it ready for the autumn. I'll of course post various photos as I go along. As these taken tonight show it how I first saw it. The joy of the autumn art season has begun! 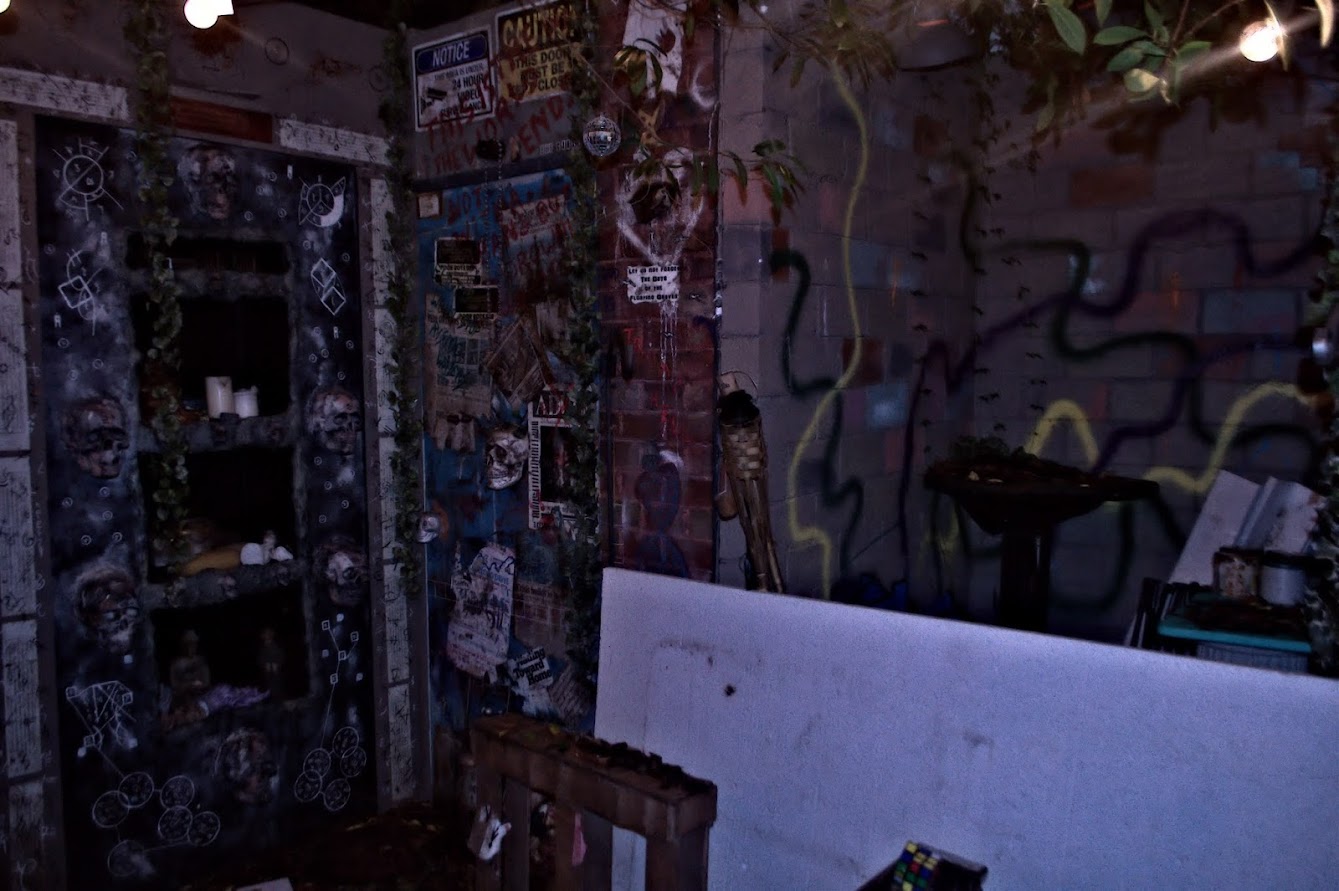 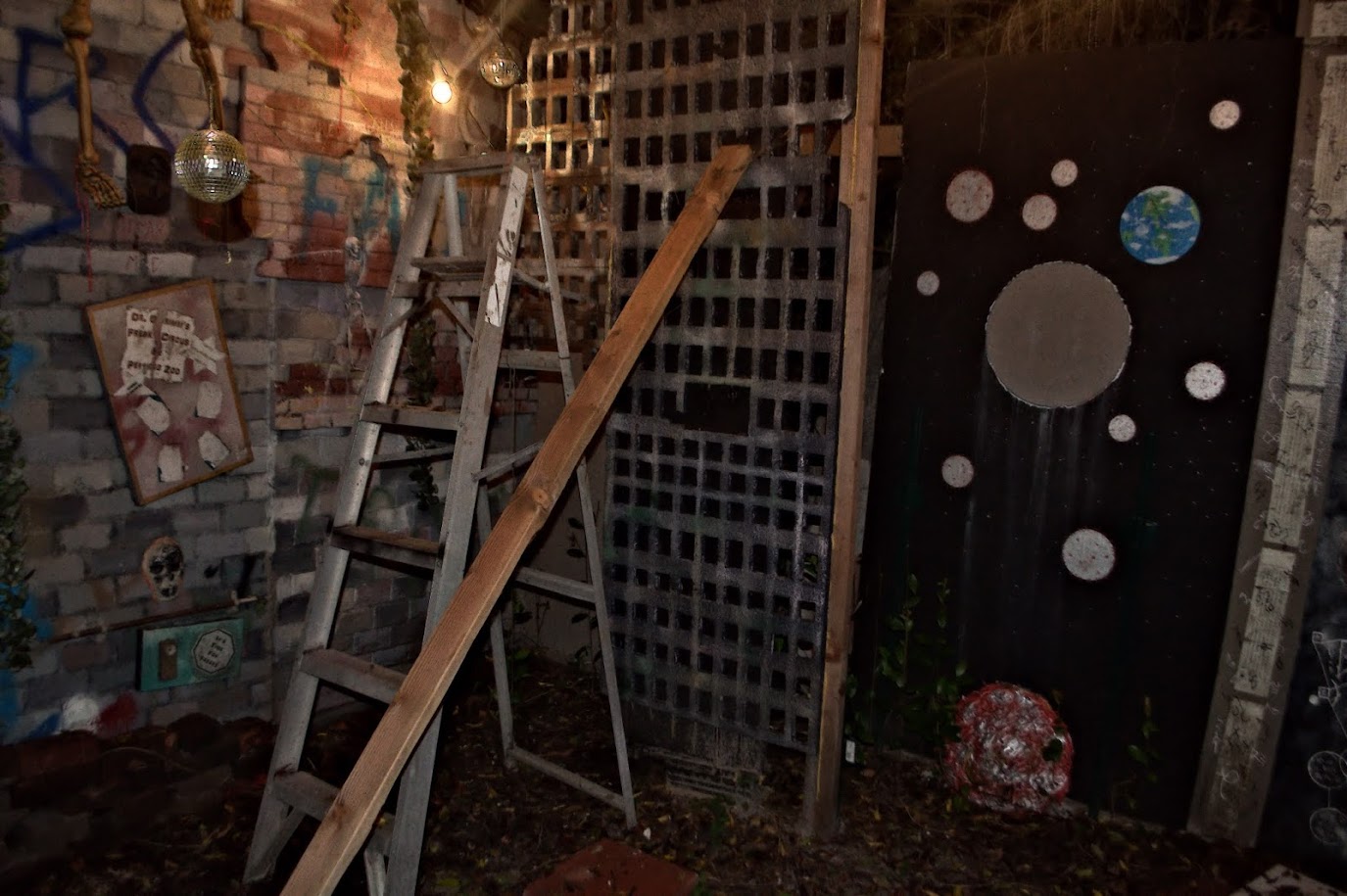 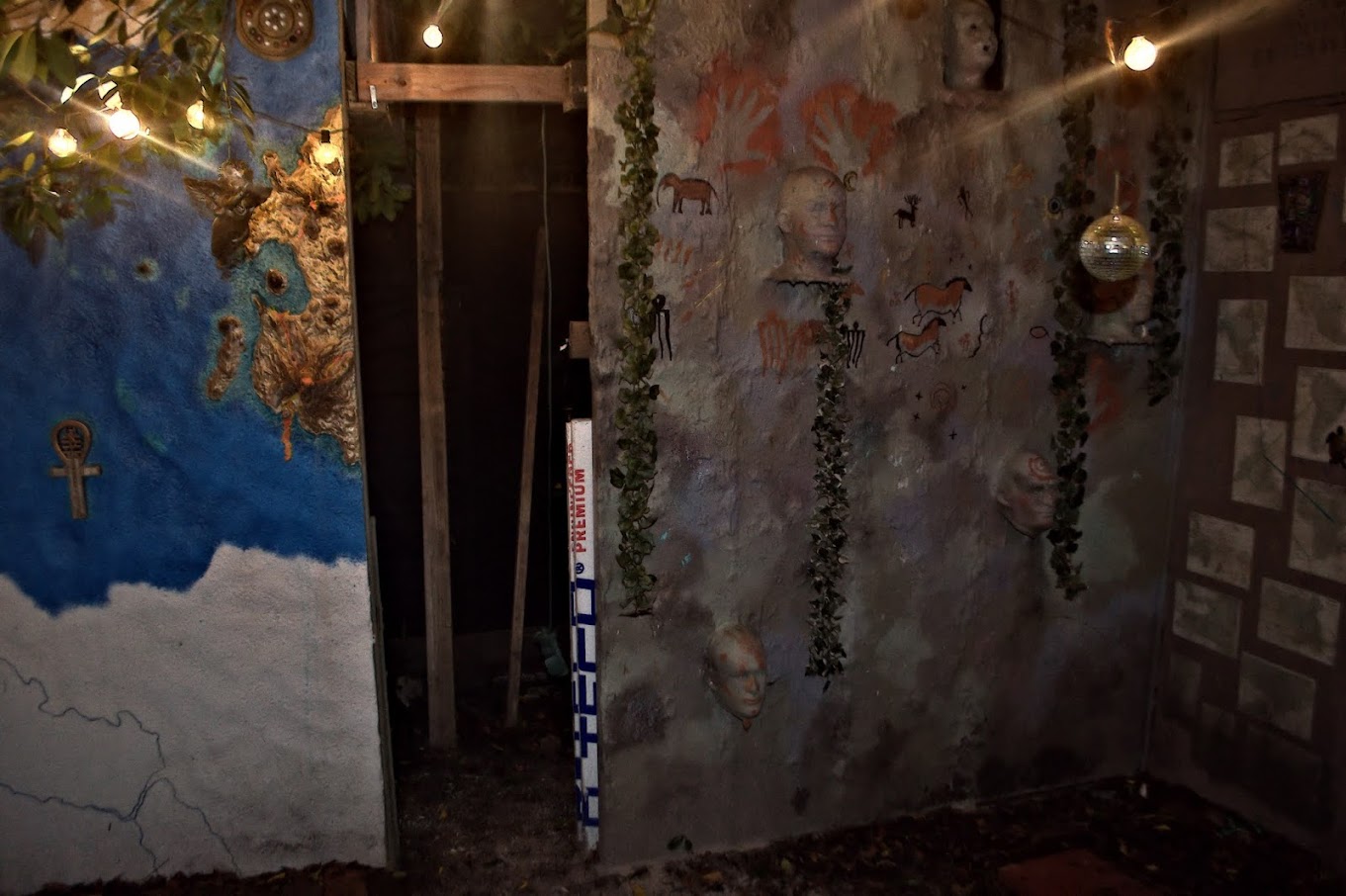 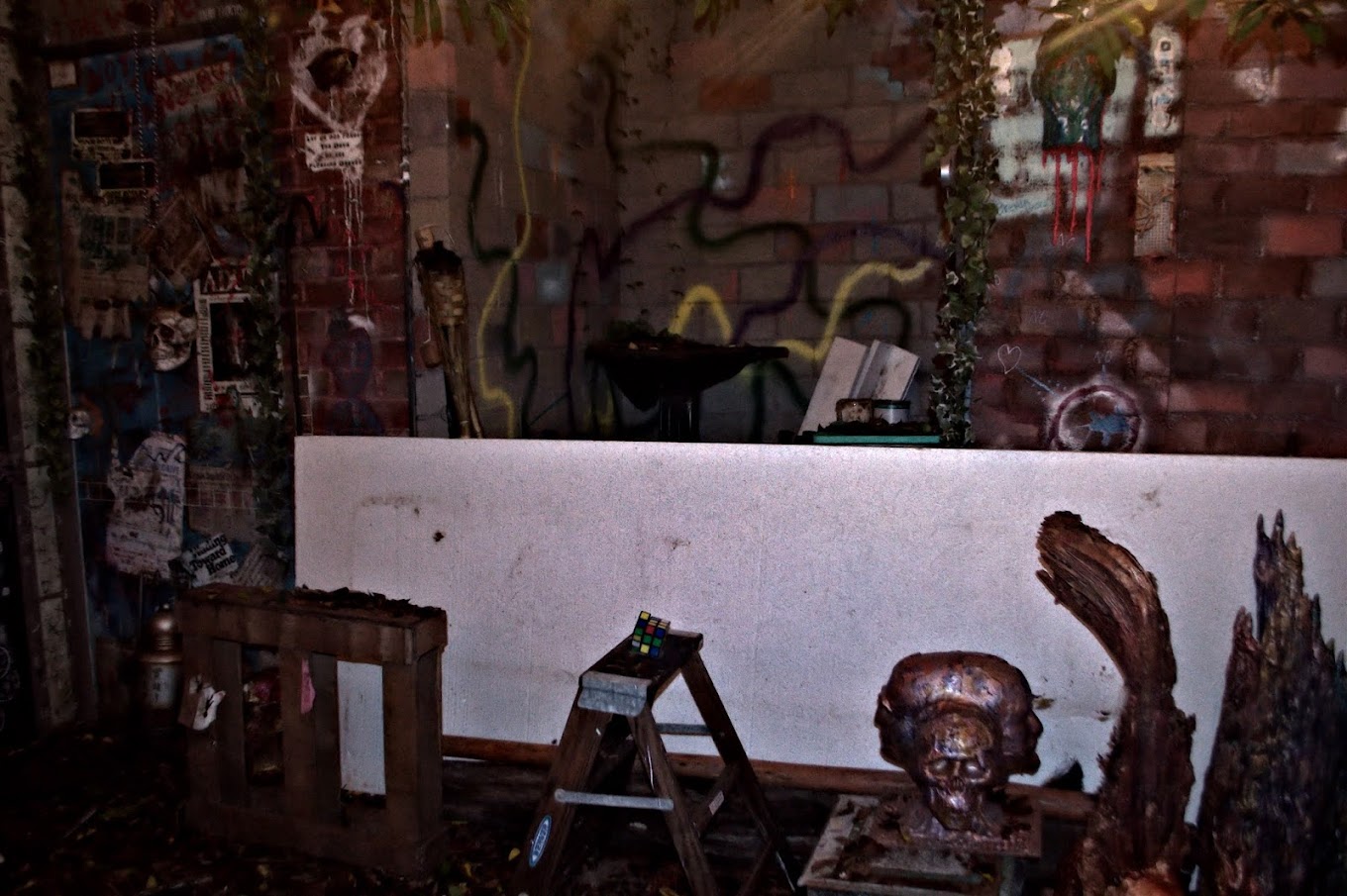 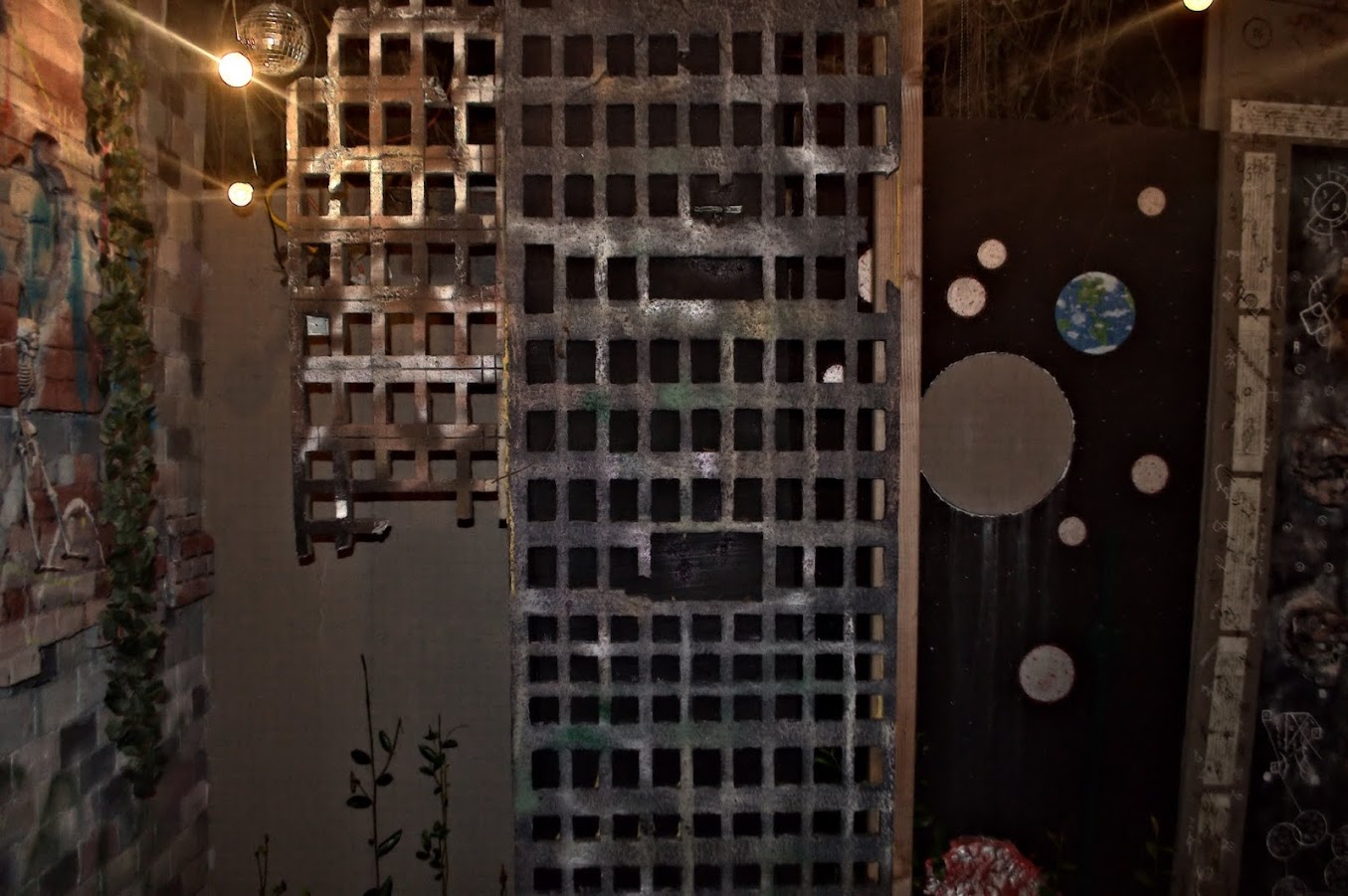 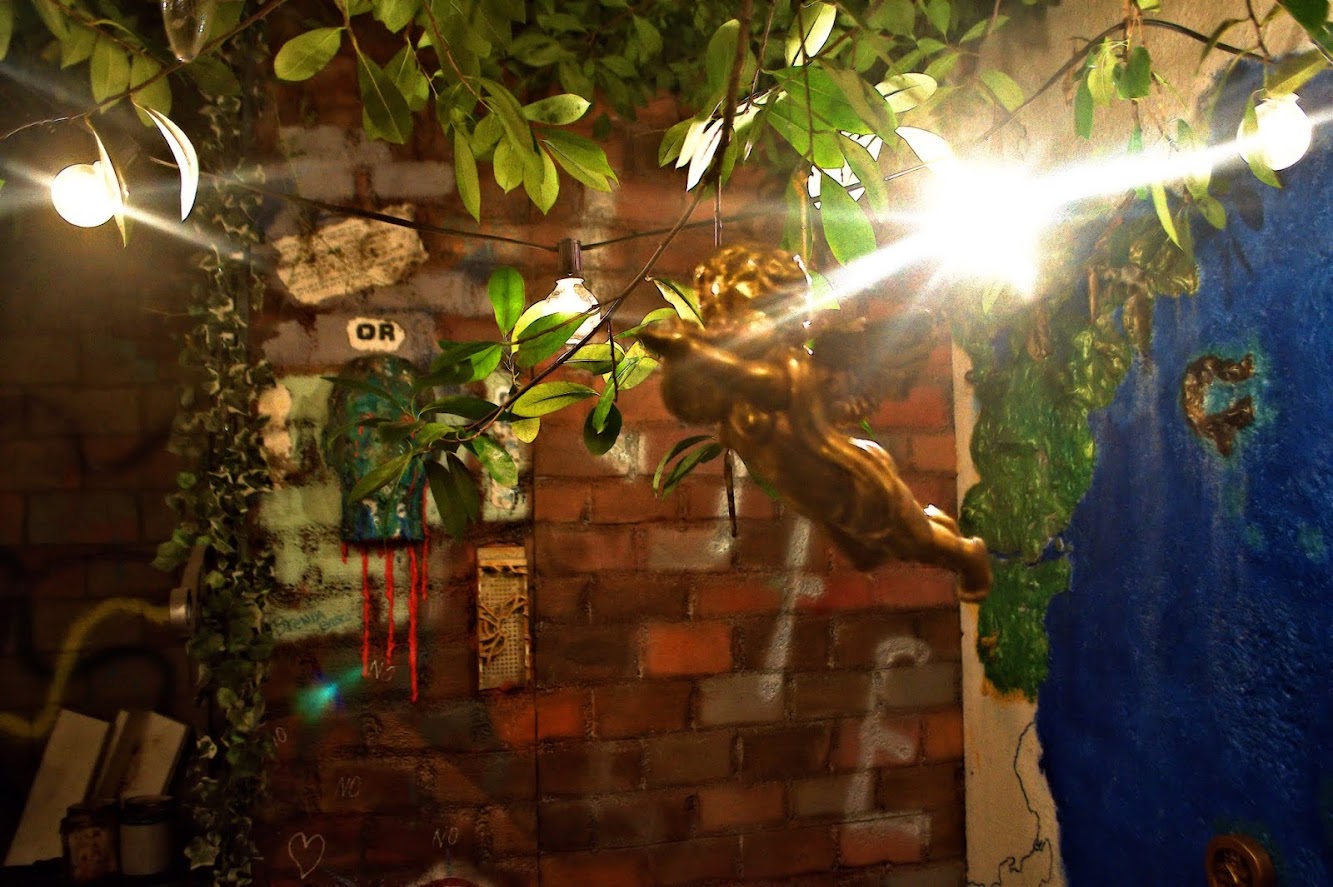 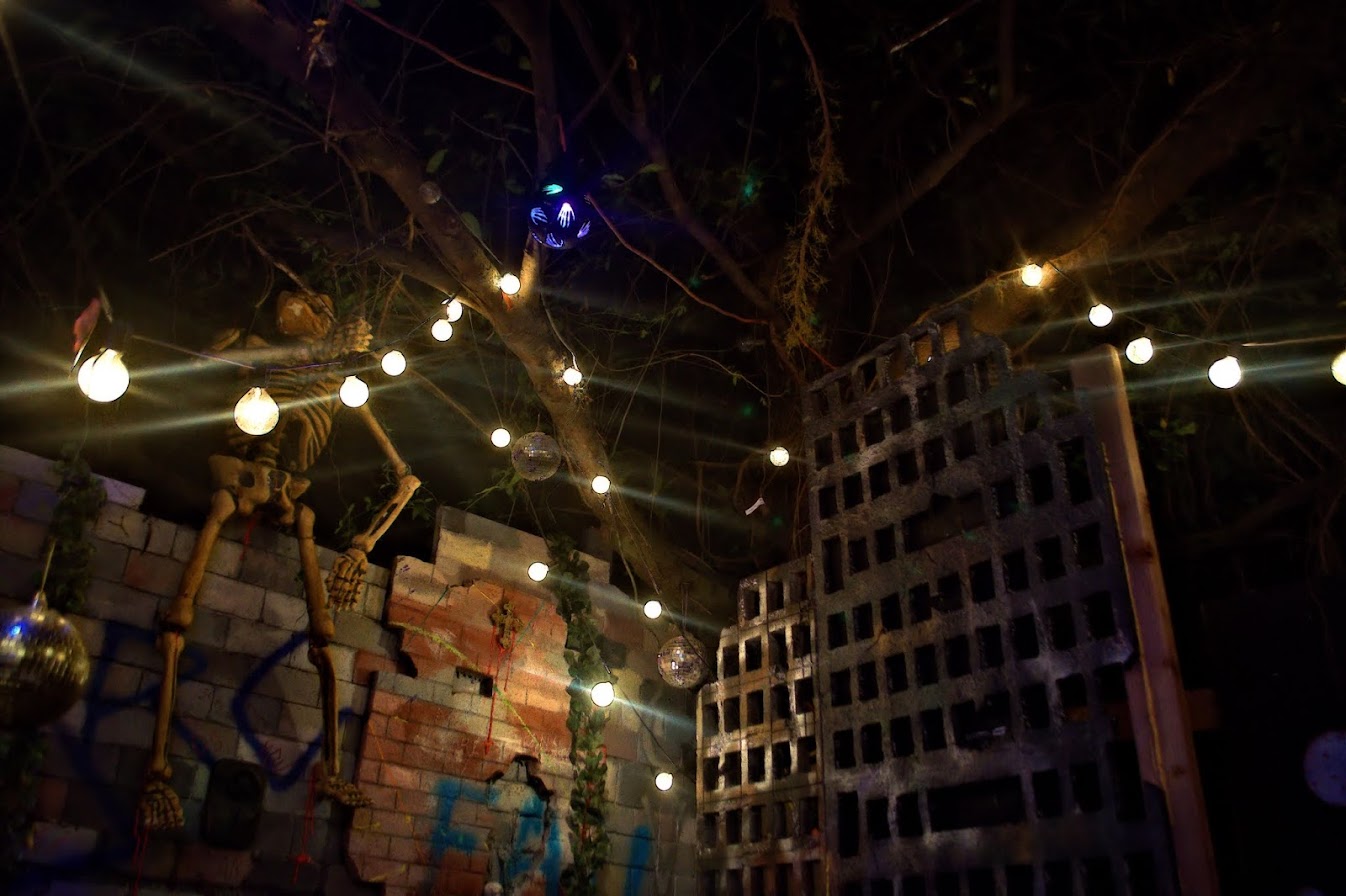 I made a bit of progress today. I got the space cleaned up and raked a bit. Bought a pair of loppers for the large weeds which had turned into trees. I'm still amazed that its been as sturdy as it is. When you consider that its built from styrofoam. Here are a few images of the days work.

The first step was destroying the shoulder high weeds in the narrow part of the alleyway back to the studio. Surprisingly the fence art faired well. 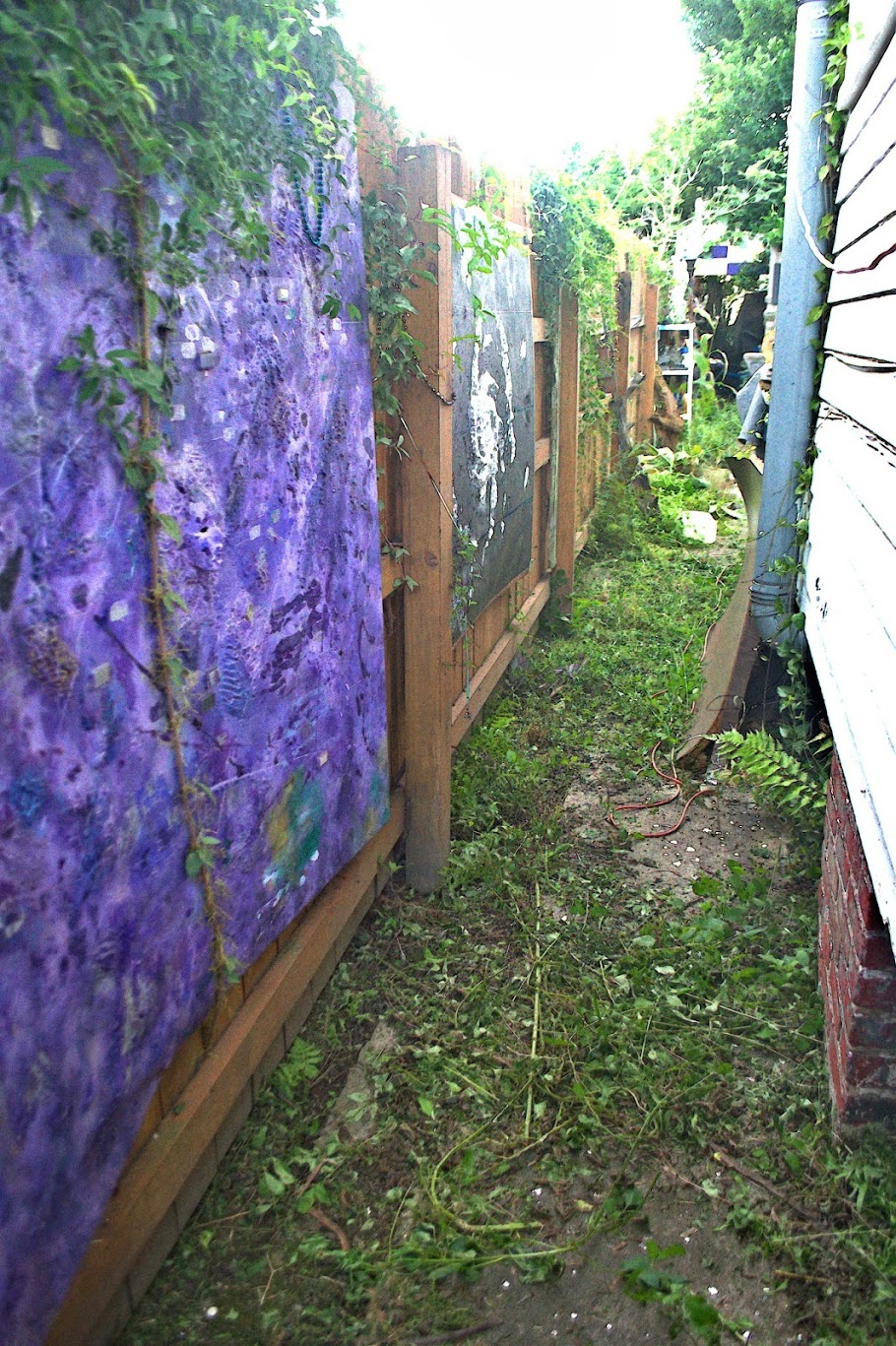 The outer work studio is in the worst shape. When I shut it down it was with intention of getting back out there and doing a cleanup (which never happened) 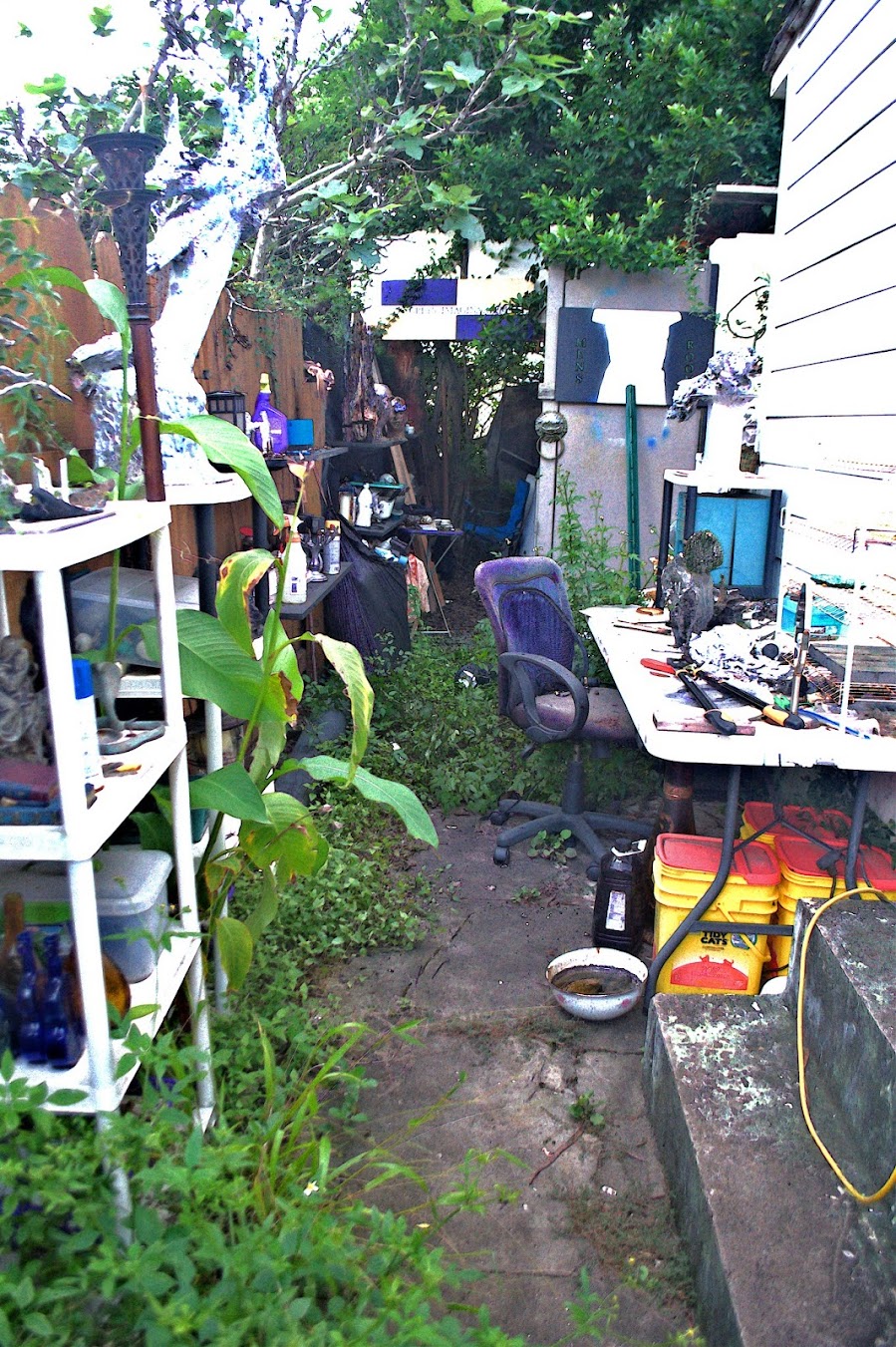 Most of this area just outside of the entry ended up being for storage. It needs to be gone over carefully. The sculpture work was stored in the inner studio and will slowly be brought back out and arranged on the shelves. 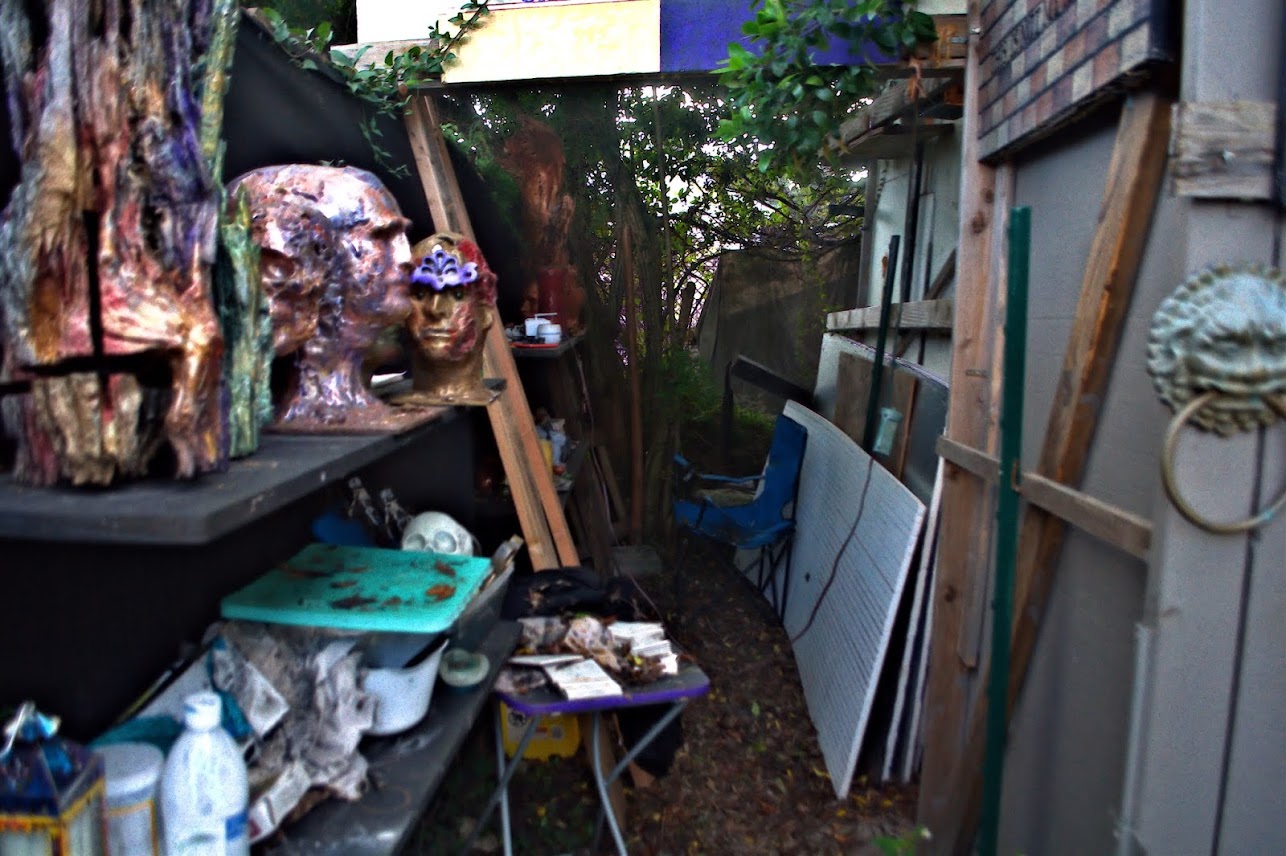 The inner studio really took very little work to snap it into shape. Once raked it looked pretty good. 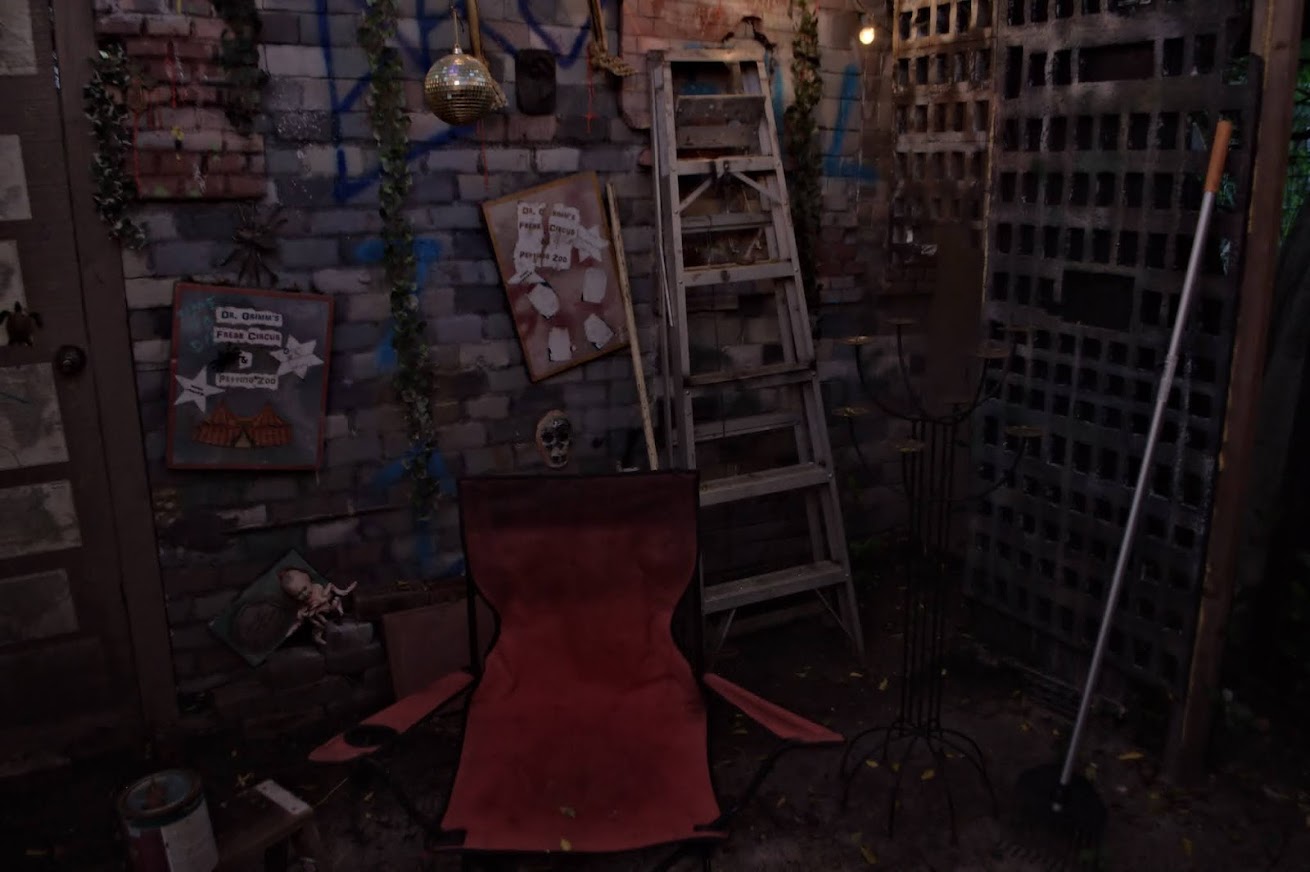 The photography area on the other hand needs quite a bit of work. I had to unpack it first because I was using it to store equipment for the summer. The scrying bowl has to be repainted and repositioned. 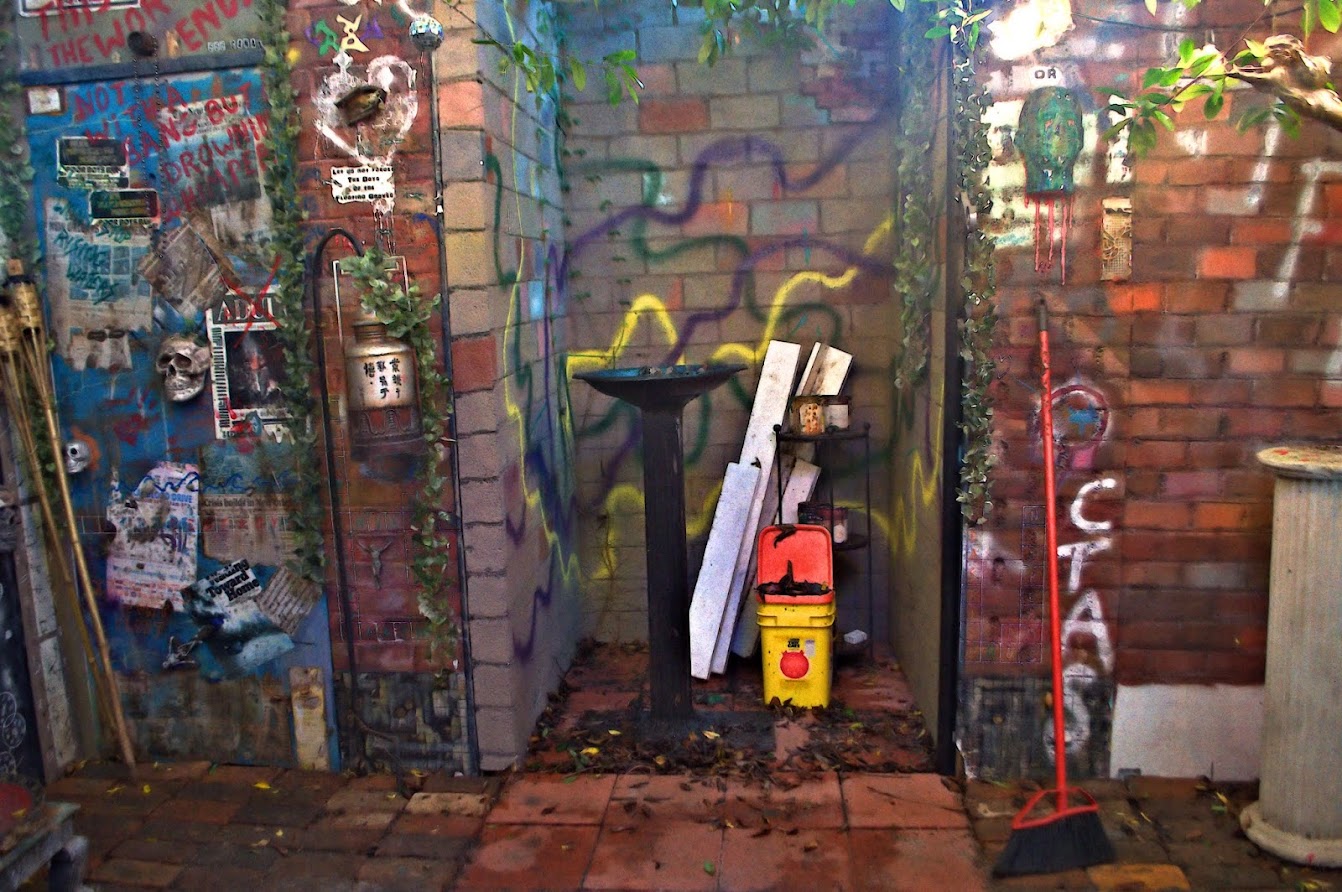 I cleaned out the grotto and began to lay in the candles and buddha sculptures back in place. 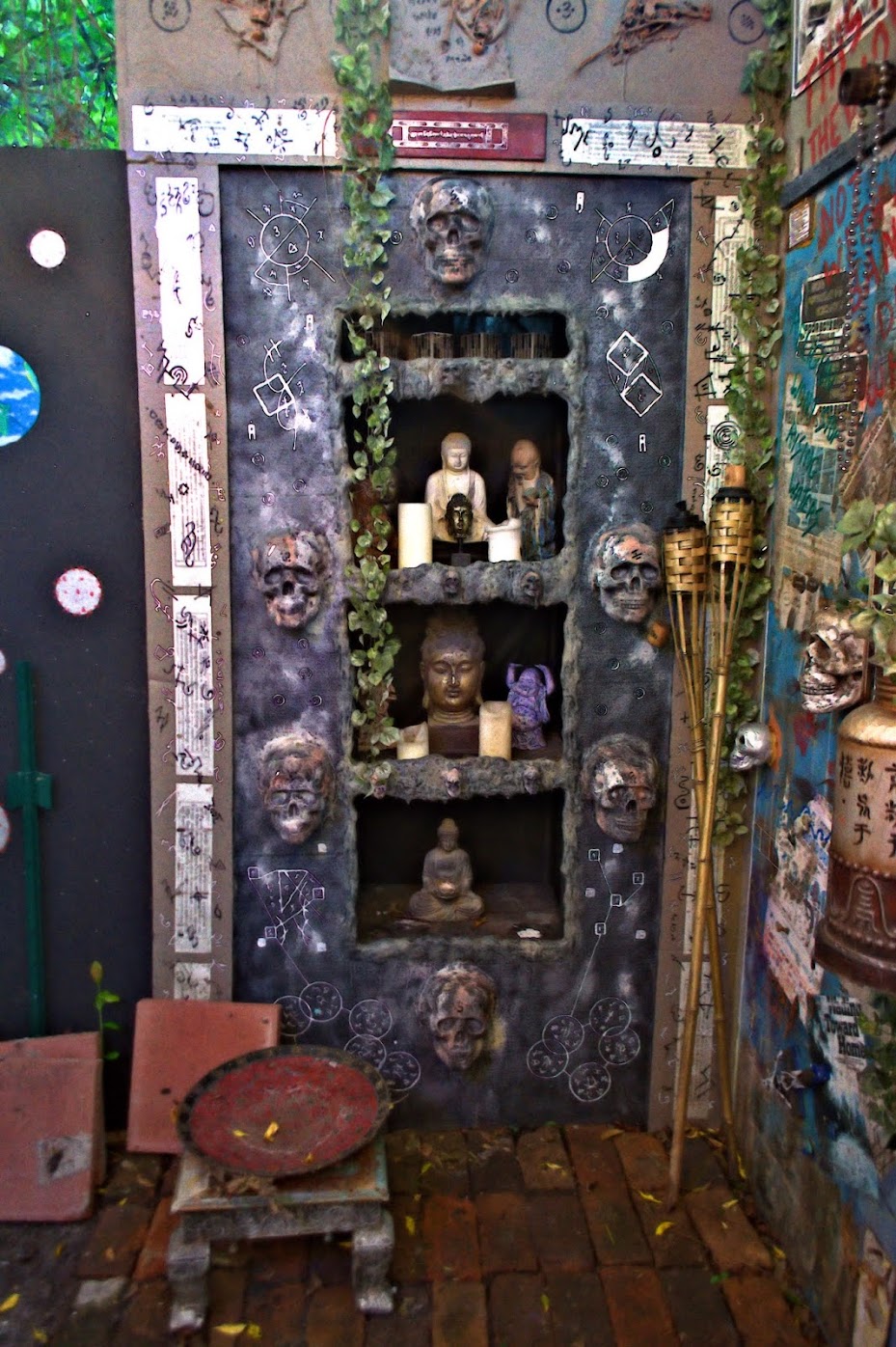 The scrying bowl was full of leaves and water. 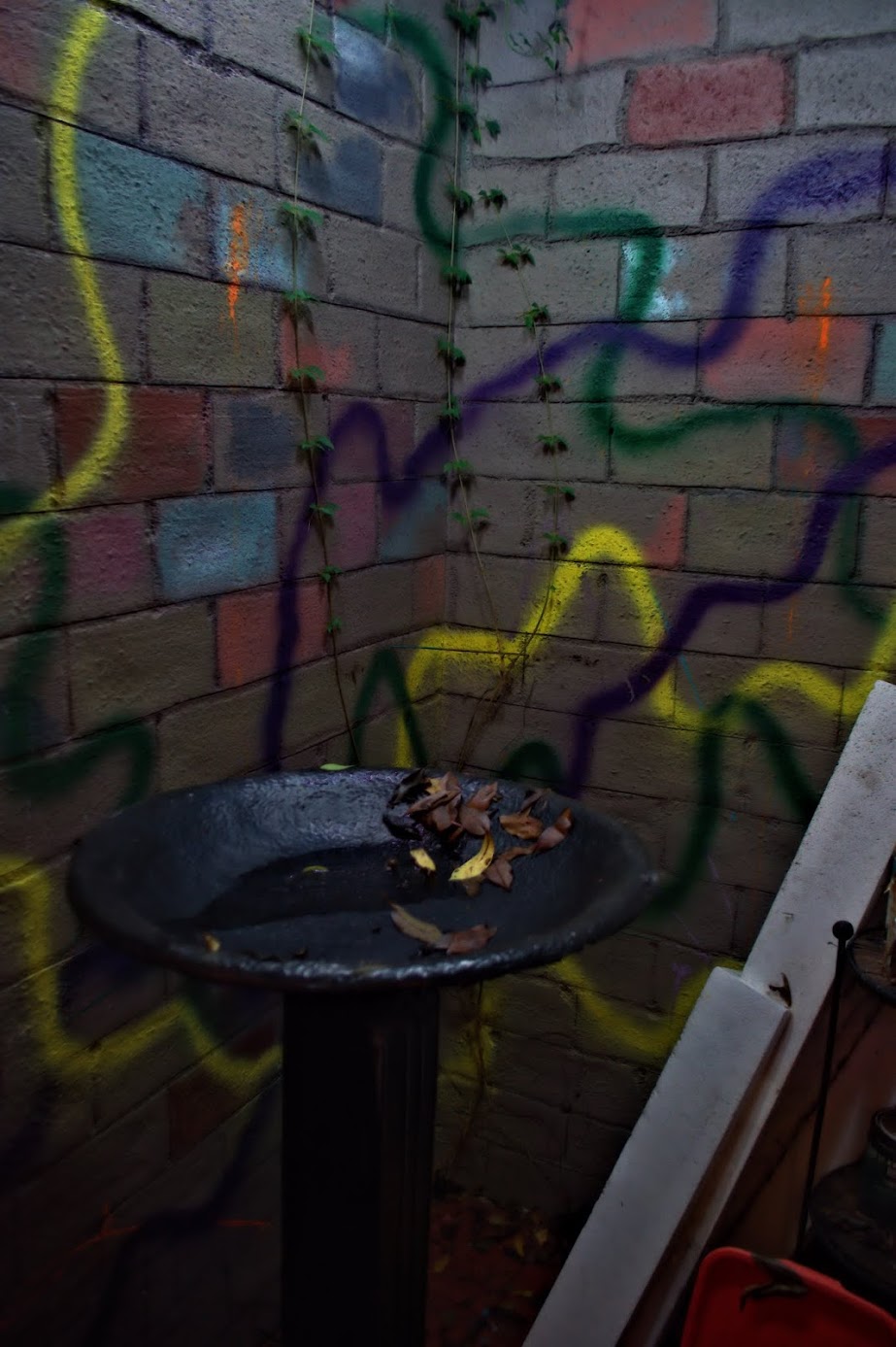 The entry sign had cats claw grow over parts of it, but I think it just lends to timelessness of area. The canopy formed by the Devil Tree is I think the best feature of the space. It creates a natural protection from the elements, a place for ambient light and a living blankets of leaves which do not shed until late December. 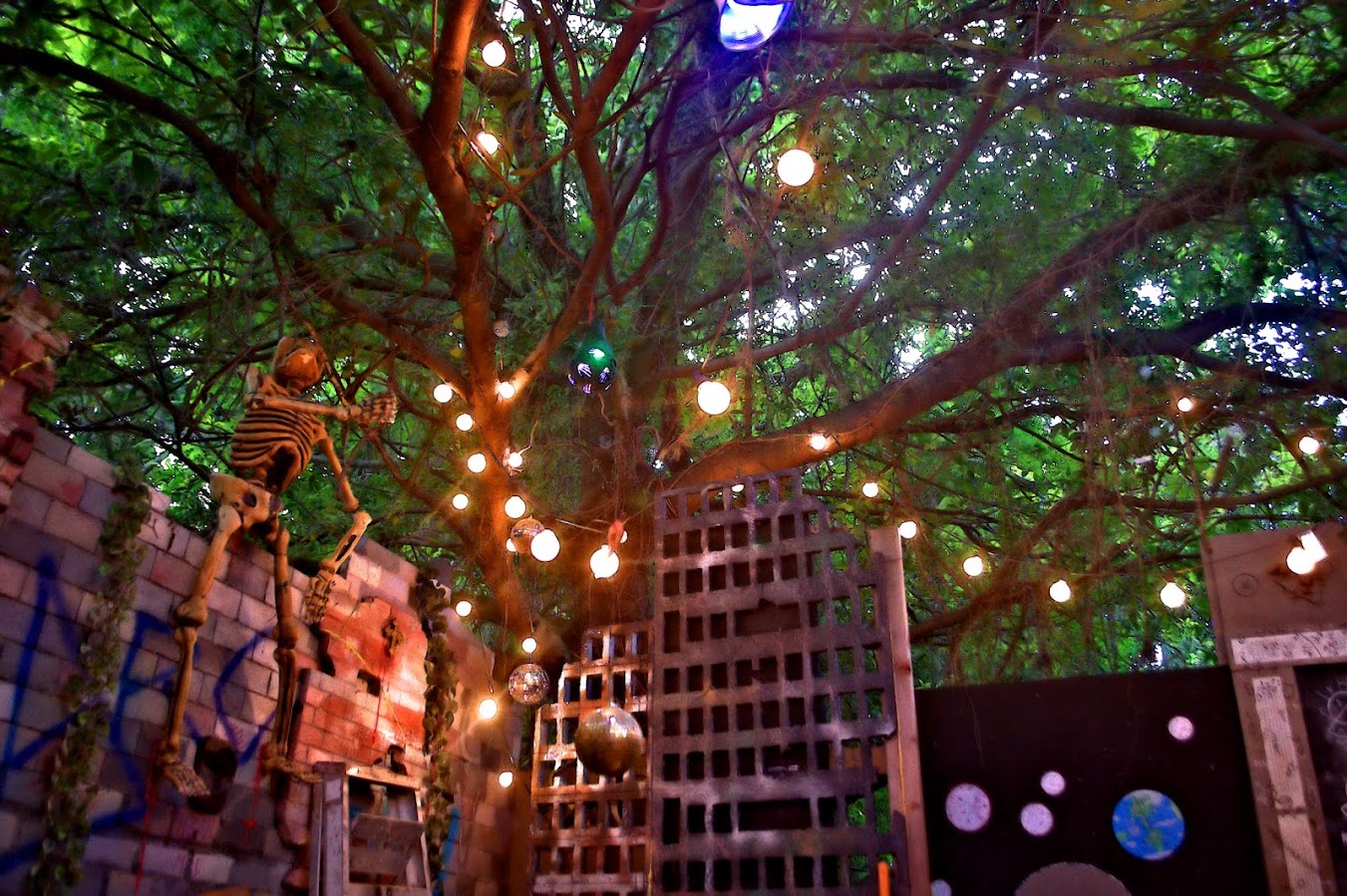 Got the inner studio up and running. Already photographing some of the new sculpture work in it. The outer area is a mess still and I HATE WEEDWACKERS! Damn thing unraveled on me twice! Here are some evening shots of the inner studio lit with candles. 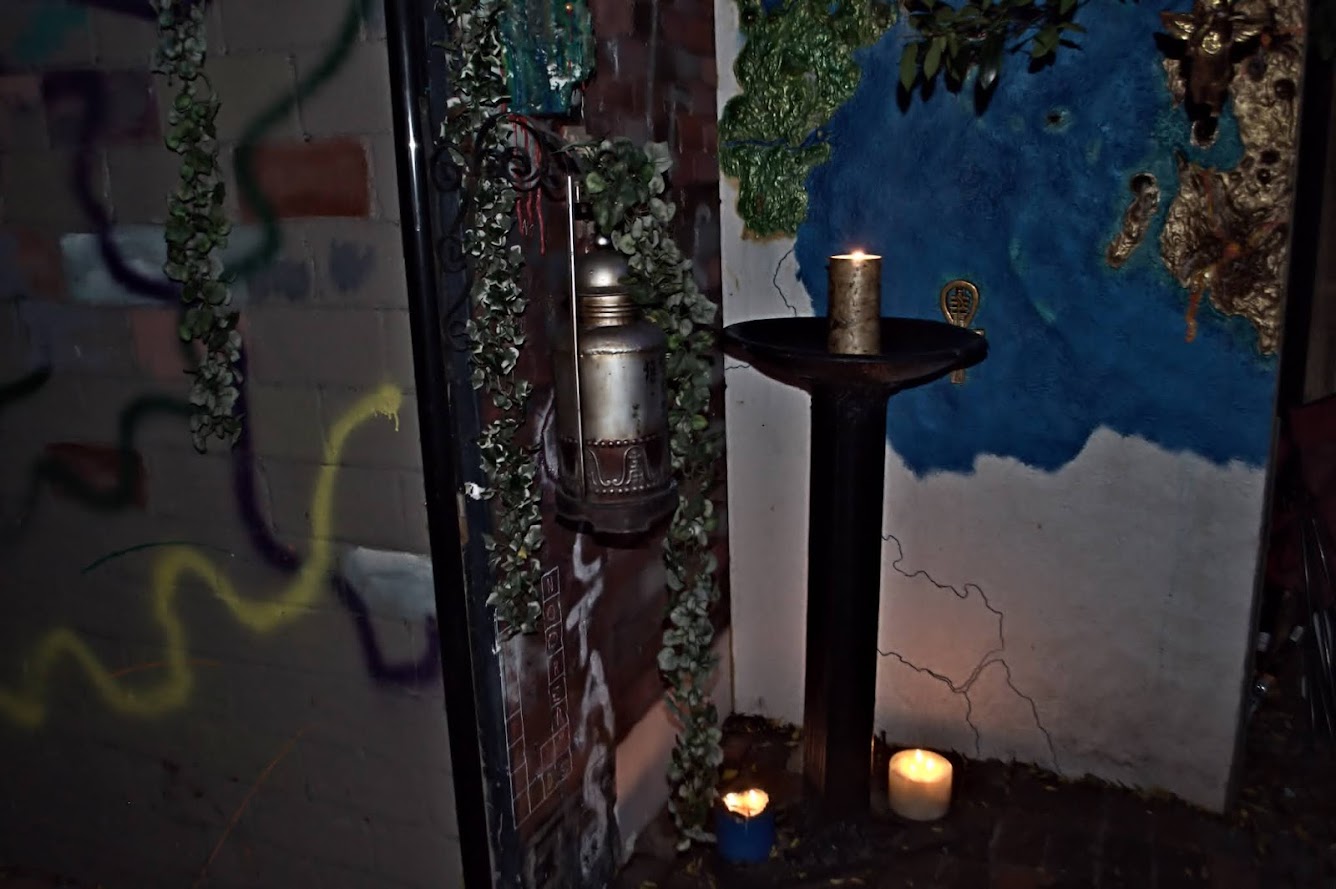 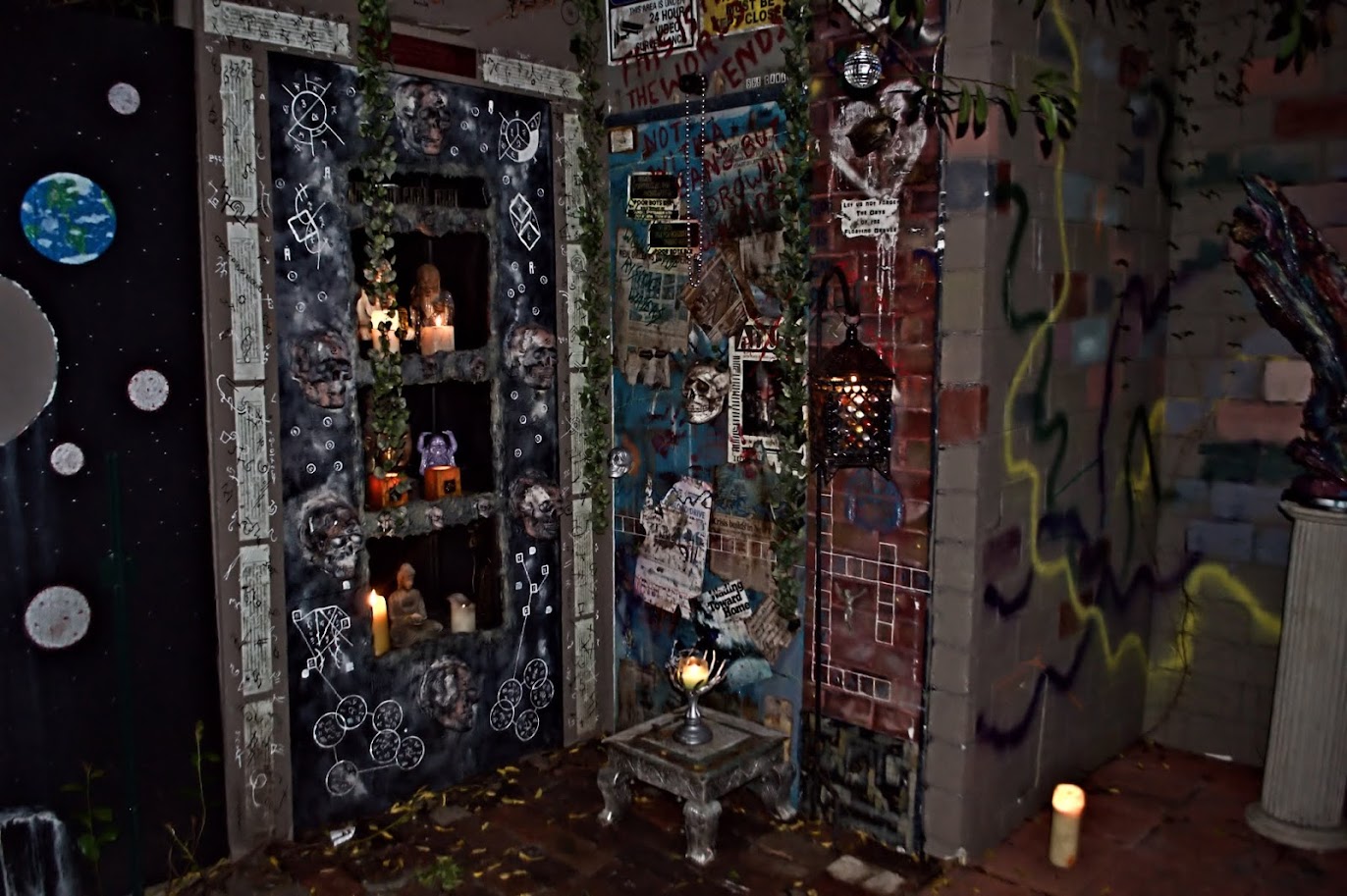 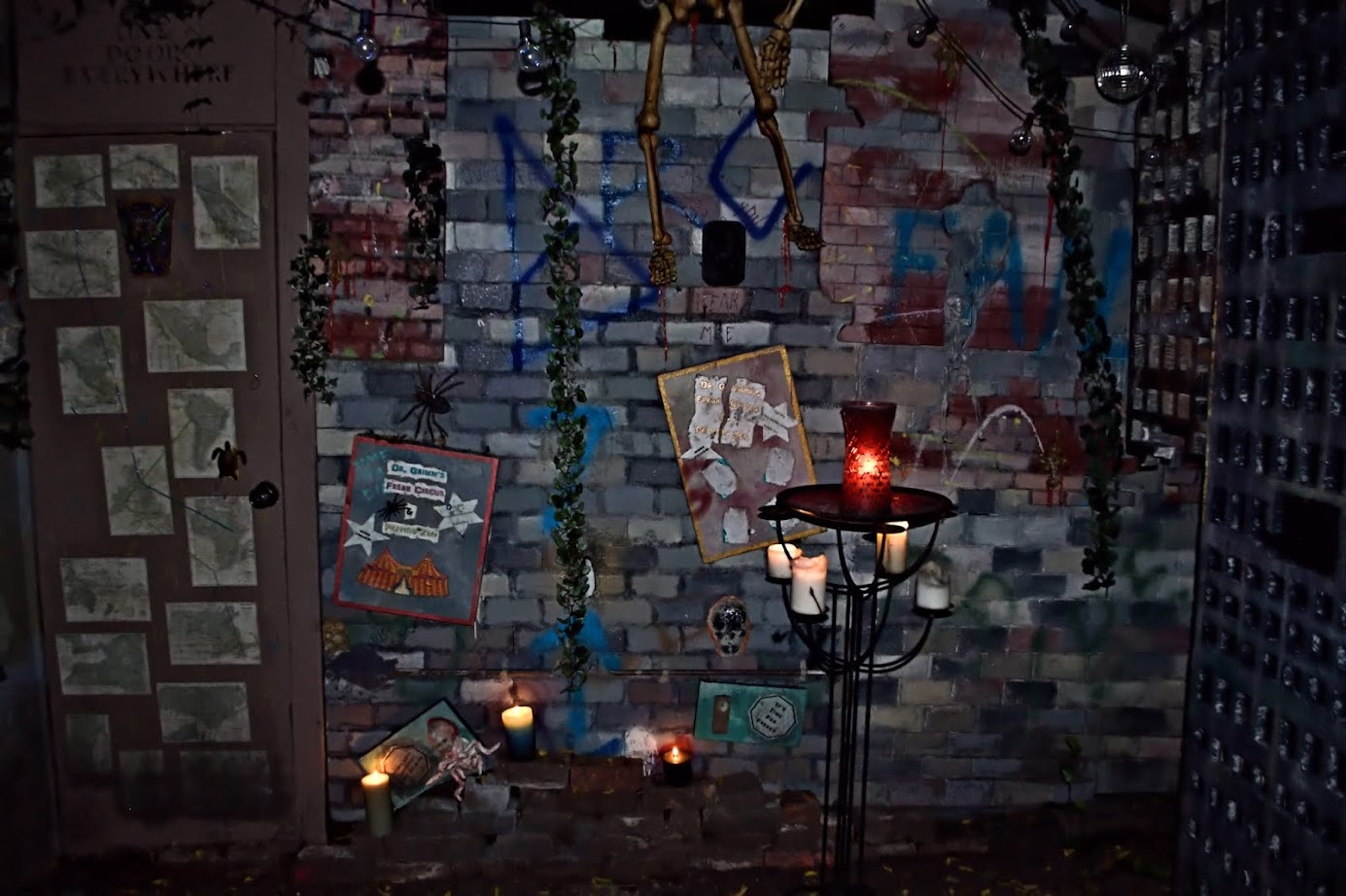 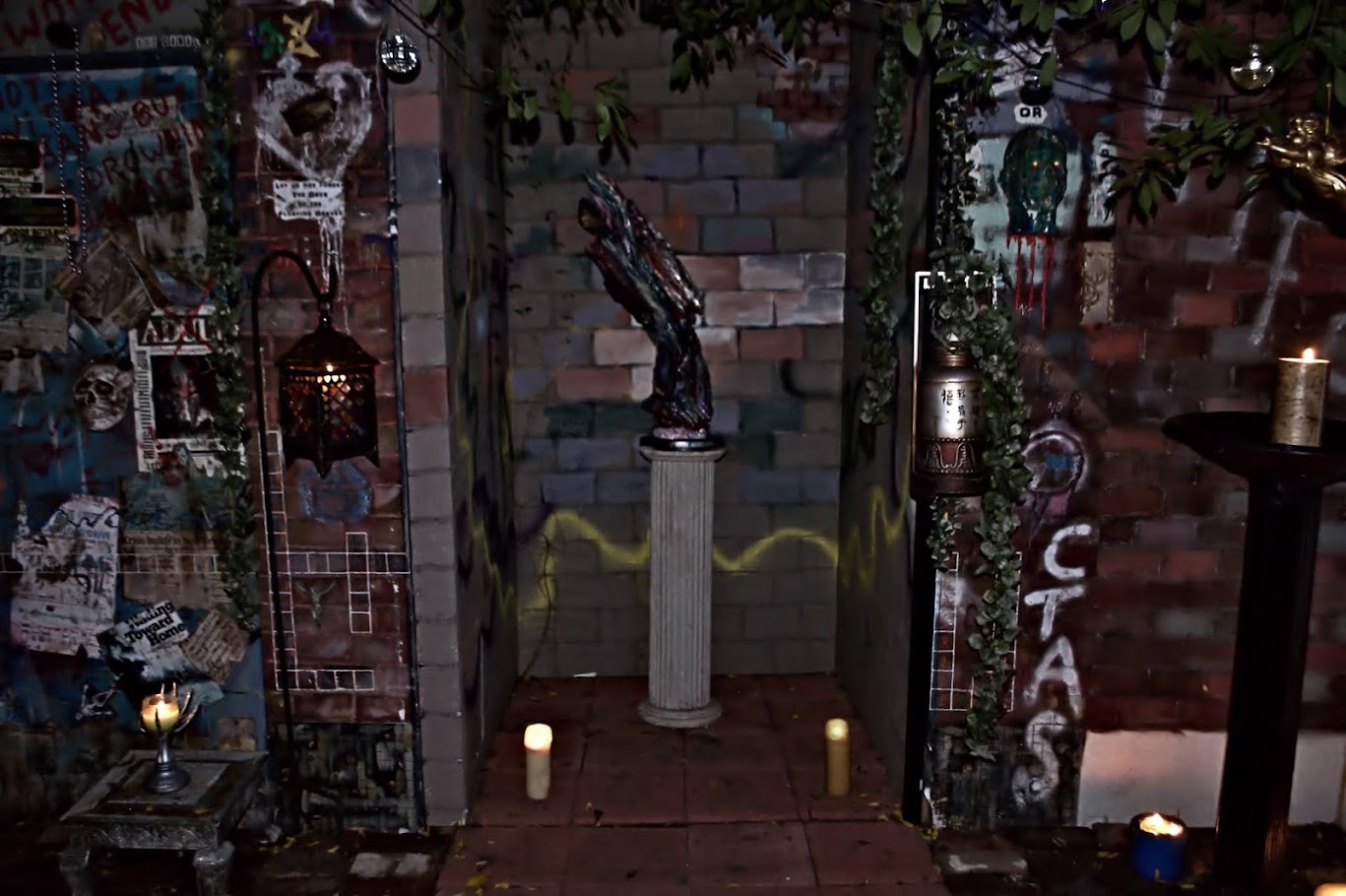