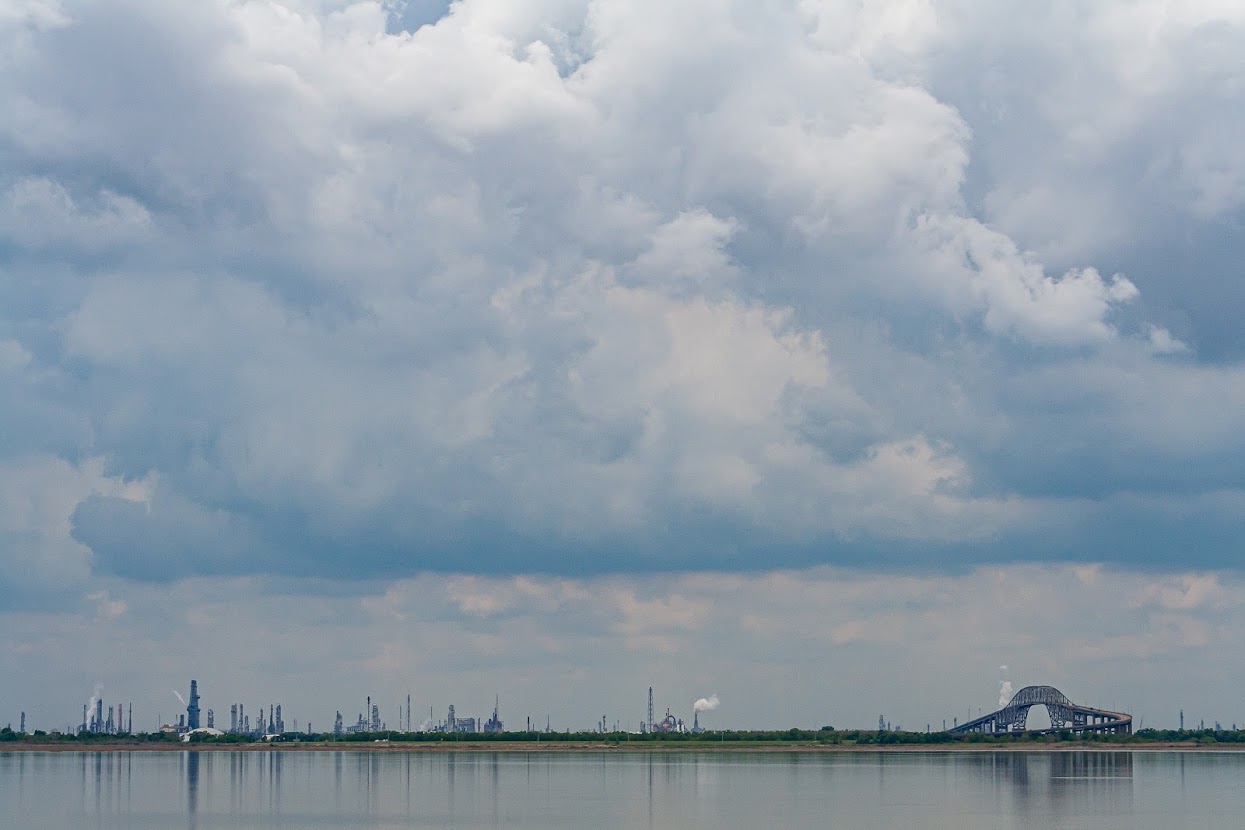 Port Arthur, Texas, 5/07
This photograph, made in May of 2007, somehow has wound up being one of my most exhibited and well-traveled prints, having been displayed in mixed and solo exhibitions in New Orleans, Baton Rouge, Sulphur (LA), Cameron, and spent a season at the Print Center in Philadelphia PA, being selected in a juried competition. It also gained me a lecture spot at an annual Louisiana photographer's convention in New Iberia, after it was seen online by a professor emeritus at UL-Lafayette, who asked the organization to have me as a guest. This photograph has brought me a bit of luck from time to time.
The original framed print, which has traveled so far, now hangs in my house, waiting for some future exhibition or sale, but for this post I went into the archive and remastered the original RAW file; updated software has allowed me to find a lot more color detail to be brought out in the image, which brings it closest to what I saw on that May afternoon.
I was on one of my early photo trips to Cameron Parish, Louisiana, after I gained a fascination with the place when I went to see it shortly after Hurricane Rita struck in 2005. The landscape is flat and almost featureless, mostly coastal prairie and wetlands, with no hill anywhere in sight. But there's a strange, hypnotic feeling to the place that always puts me in a trance. For hours on end the only sound heard is a low hiss of wind blowing through tall marsh grass, and it's usually hot and humid. Highway 82 runs west from Holly Beach, close to the Gulf shoreline, past the town of Johnson Bayou, and then to the Texas state line at Sabine Pass. Across the pass is Port Arthur - once a booming oil city, fallen on hard times. The largest original residential area on its west side was surrounded by the petrochemical refineries that brought the city its fortune, but also sickened and shortened the lives of the people who lived next to and worked at the refinery. Their homes, built before anyone ever considered the long term effects of daily exposure to refinery waste, were rendered worthless; the companies bought out many of the properties for peanuts and moved the residents into smaller homes further away. Similar stories accompany other cities and towns that host refineries in east Texas -- Corpus Christi and Beaumont, to name two.
The refineries of Port Arthur are seen at lower left in the photograph; the Route 82 bridge, leads into town, directly between the refinery and the neighborhood that is approaching ghost town status, with the population being pushed away to nearby cities Groves and Port Neches. It was an unusually hot afternoon when I decided to cross the Sabine Pass bridge to have a look at Port Arthur, and drove along a levee road marking the shoreline of Sabine Lake. I stopped and climbed to the top of the levee to look at Port Arthur, 2 miles away to the northwest, across a pond on a piece of reclaimed land between Sabine Lake and the Port Arthur shipping channel. I remember the wind picking up and thunderstorms starting to form, with this sight in front of me - almost looking like some alien city on a far away blue-grey planet. The actual landscape makes up probably less than a tenth of the image, the rest being sky and water, but there is still the stark reality of pollution and urban decay visible, the bleakness of it all pitted against a turbulent sky about to swallow it up.
I can't find any answer as to why this photograph has gained more traction and traveled more than some of my other work; I've never been told by anyone what they saw in it, just that it kept their gaze. I do remember at the time I made this photograph I was aware that I had something, and that a good moment had fallen into my lap. The area around Cameron Parish and Port Arthur has always been a favorite photographic haunt of mine, and I've gone back year after year, the results of which make up probably the largest portion of all my work, and this particular one has aged well.